For the Metroid fan, it’s either feast or famine. Up until last June, series devotees were in a record-long drought, having waited seven years for word of a…soccer-less Metroid game. But then E3 2017 landed the one-two knockout of Metroid: Samus Returns and Metroid Prime 4. It was as if history had nearly repeated itself, as fifteen years earlier the simultaneous release of Metroid Fusion and Metroid Prime ended another near-decade-long dry spell. And while Metroid Fusion remains a fondly remembered game, Metroid Prime stole the show, bringing the franchise into 3D while collecting countless accolades. But how does the Gamecube’s killer app hold up a decade and a half later? In celebration of Metroid Prime’s return, I will be systematically analyzing the design of each of the original’s main areas. Tally-ho, Tallon IV — it’s time to scan you region-by-region. In this entry, I will look at the game’s fourth area: the Magmoor Caverns. 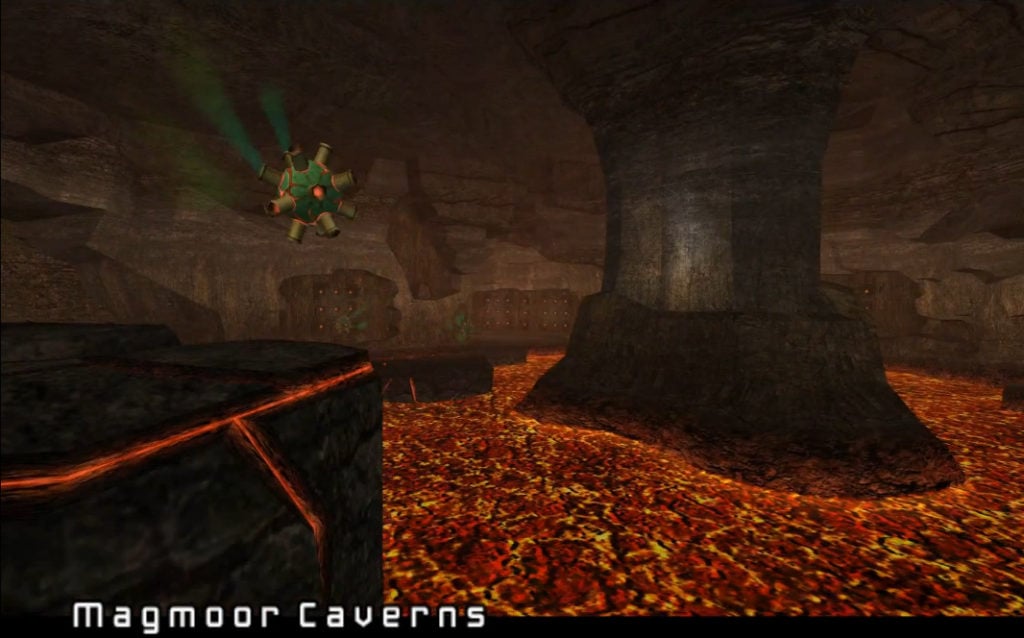 The Magmoor Caverns are a scalding hot network of subterranean caves filled with lava. As in Super Metroid’s Norfair, the region’s intense heat emanates through multiple venues, including specialized visual details and environmental damage. Although the Caverns’ artwork is fairly uniform, it consistently depicts a region defined by its extreme temperature, and always conveys a sense of realism through various visor effects, ambient use of steam, and effective lighting. It sets out to feel hot, and it does so thoroughly. Every jaunt through the Magmoor Caverns feels like an iron-hot pressurized claustrophobic gamble, and it convincing builds its architecture around that sense of despair, from its magma pools, to its ignatius rock pillars, to its steam jets. As one of the most purely naturalistic regions, the Magmoor Caverns feature near-negligible Chozo or Space Pirate influence and no narrative logbook entries, making it the least story- or lore-relevant area of the game.

Unfortunately, the Magmoor Caverns’ long linear layout ultimately renders this sensorily evocative area mundane. Indeed, outside of a couple short paths that link to elevators, the Magmoor Caverns are a single narrow strand of connected rooms, which themselves are typically long and narrow. One room leads to another room, which leads to another room, always in the same order and rarely enjoyable after the first visit. Adding insult to injury, the most branching room is the Monitor Station, a room the player will be required to traverse several times and whose enemies, enemy placements, and platforming grow tiresome very quickly. In fact, many players will venture through the Caverns numerous times, since they connect to every region in the game bar the Impact Crater. While the caverns themselves are somewhat diegetically consistent since Samus takes elevators underground to reach them, using the Caverns as a shortcut emphasizes how disparate the other regions feel. This is because Samus can be in say, the Chozo Ruins, take an elevator to the Caverns and travel three rooms underground, and take another elevator up to the Phendrana Drifts, which seem like they should be thousands of miles away from the Chozo Ruins. 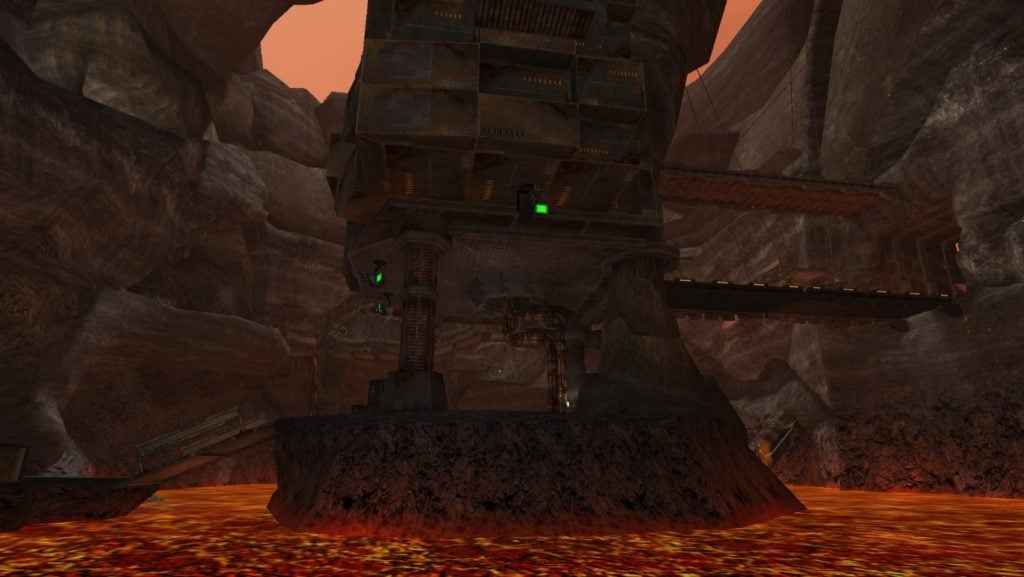 The Magmoor Cavern’s primary concern is its internal battle between linearity versus interconnectivity. As a standard Metroid fire zone, one might argue that its heat is its prominent design facet, but for some players its contradictory design leaves a more lasting mark on their overarching experience. Some describe Magmoor Caverns as a subway, and though it seems designed with such an intention in mind, it could really use an express train. Having to traverse the exact same sequence of rooms forwards and backwards becomes a chore after just a couple trips, let alone throughout the end-game artifact collection slog. But at the same time, the Magmoor Caverns are the most interconnected region in the game, connecting to every region minus the Impact Crater. When this excessive linearity combines with interconnectivity, the player is left with neither a memorable, well-paced, ostensibly designed experience nor an effective fast travel network. They are left with a region that tries to walk a tightrope but manages to fall on both sides of it. 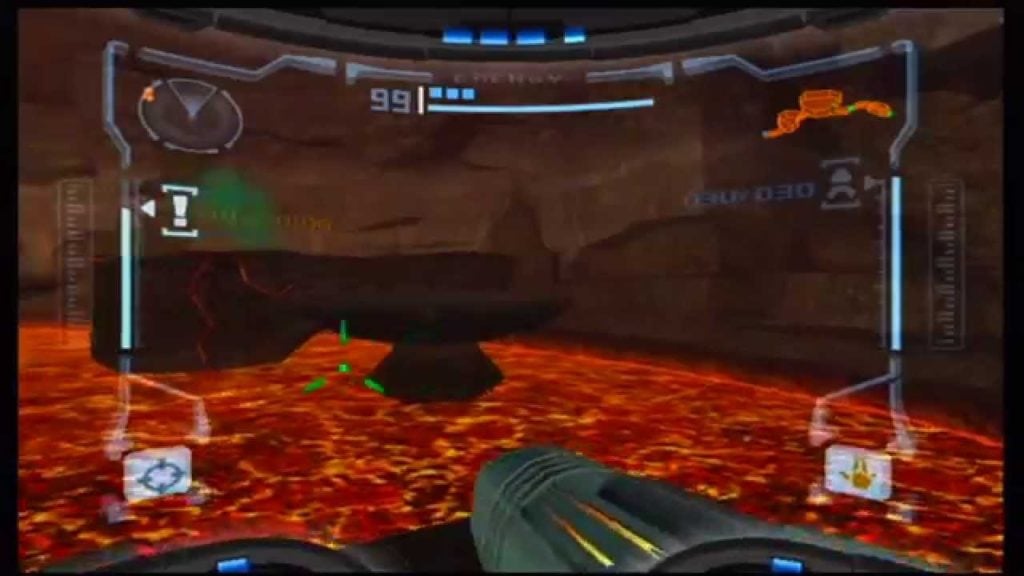 This linearity is further weighed down by the Magmoor Caverns’ excessive environmental hazards. In fact, the Caverns may contain as much lava as solid ground, meaning that the region doesn’t only force players along a path between rooms, but also within each room. On one hand, Metroid Prime really nails the ambience through these environmental hazards — the visor effects, the art, and the enemy design successfully blend together to craft a distinct atmosphere that elaborates upon Super Metroid’s Norfair. But it is difficult to fully appreciate all of this when it is relentlessly spoon-fed to the player, keeping them (sometimes literally) on rails between and within individual rooms. In this sense, Magmoor Caverns emphasizes the importance of level design, and how much poor level design can detract from other fantastically designed but less essential components of that level. Were there a boss fight that hardened the lava (as beating Flaahgra detoxes the Chozo Ruins’ water), a wider variety of possible paths to take, or even a pick-up that allowed Samus to walk on the lava, it could have gone a long way toward diversifying the experience here.

The Magmoor Caverns are home to two Energy Tanks, three Missile Expansions, a Power Bomb Expansion, two Artifacts, the Ice Spreader, and the Plasma Beam. As a whole, the area is noticeably devoid of meaningful items, with the Ice Spreader and the Plasma Beam being the only new abilities. The Ice Spreader is essentially the Ice Beam’s special move. It looks incredible, but there’s never a moment when using it feels like the best strategy, and it’s only use is in combat even though it’s practically begging to be used for environmental interaction, such as freezing the lava in the Magmoor Caverns. Likewise, the Plasma Beam is a stunning and powerful weapon that tears through most of Metroid Prime’s enemies, but its heat properties could have been further accentuated in combat and puzzle-solving by using its heating effect in more situations. 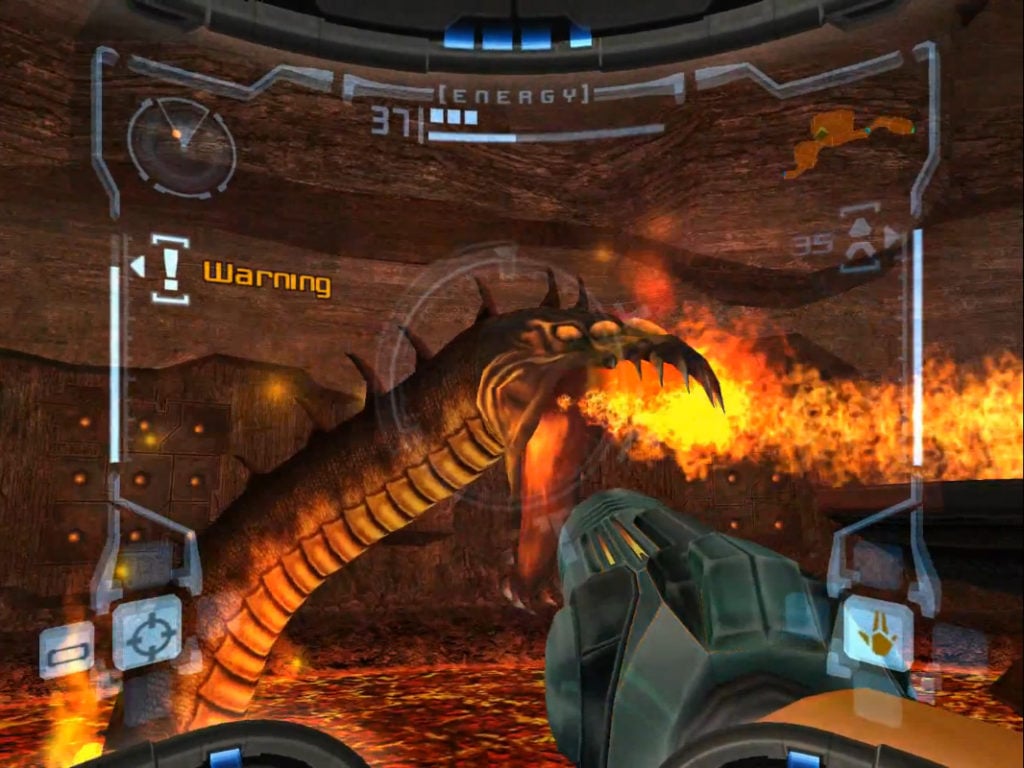 The Caverns feature a wide array of enemy types with unique behaviors, even if they are not as plentiful as in regions like the Tallon Overworld. Enemies like the Magmoors and Puddle Spores are striking first encounters that the player can measure their progress against as they jaunt around them in the late game. However, obstructive enemies such as the Triclops, Puffers, and Auto Defense Turrets hamper movement, which can feel frustrating while backtracking through the area for the umpteenth time. In fact, dealing with them time and again can inspire a hastier, less deliberate play than Metroid Prime normally encourages, as it often seems more effective to just run through the lava as quickly as possible. Furthermore, the Magmoor Caverns is the only area that does not feature a boss battle, which is especially unfortunate given how clever and memorable the battle against Crocomire is in Super Metroid. Retro may have initially intended for Thardus to appear as a boss here, but it was removed due to time constraints and frankly would not have measured up to Crocomire anyway.

Every region in Metroid Prime embodies the game’s values to some degree, but if there were a region that feels designed by a different team, or copied and pasted from a different game, that region would be Magmoor Caverns. Magmoor Caverns is a burning contradiction. It is the most interconnected region in the game, but by far the most linear. It feels hot-as-hell aesthetically, but doesn’t do much with it procedurally. Its few unique enemy designs are formidable, but they’re easy and there is no boss to back them up. More so than any other region, the Magmoor Caverns leaves me wondering what could have been. There are regions I like and regions I dislike, but Magmoor Caverns is the one I most dislike disliking because it easily could have been so much more. Despite its scorching heat, it is the most underbaked region in all of Metroid Prime.