For the Metroid fan, it’s either feast or famine. Up until last June, series devotees were in a record-long drought, having waited seven years for word of a…soccer-less Metroid game. But then E3 2017 landed the one-two knockout of Metroid: Samus Returns and Metroid Prime 4. It was as if history had nearly repeated itself, as fifteen years earlier the simultaneous release of Metroid Fusion and Metroid Prime ended another near-decade-long dry spell. And while Metroid Fusion remains a fondly remembered game, Metroid Prime stole the show, bringing the franchise into 3D while collecting countless accolades. But how does the Gamecube’s killer app hold up a decade and a half later? In celebration of Metroid Prime’s return, I will be systematically analyzing the design of each of the original’s main areas. Tally-ho, Tallon IV — it’s time to scan you region-by-region. In this entry, I will look at the game’s second area: the Tallon Overworld. 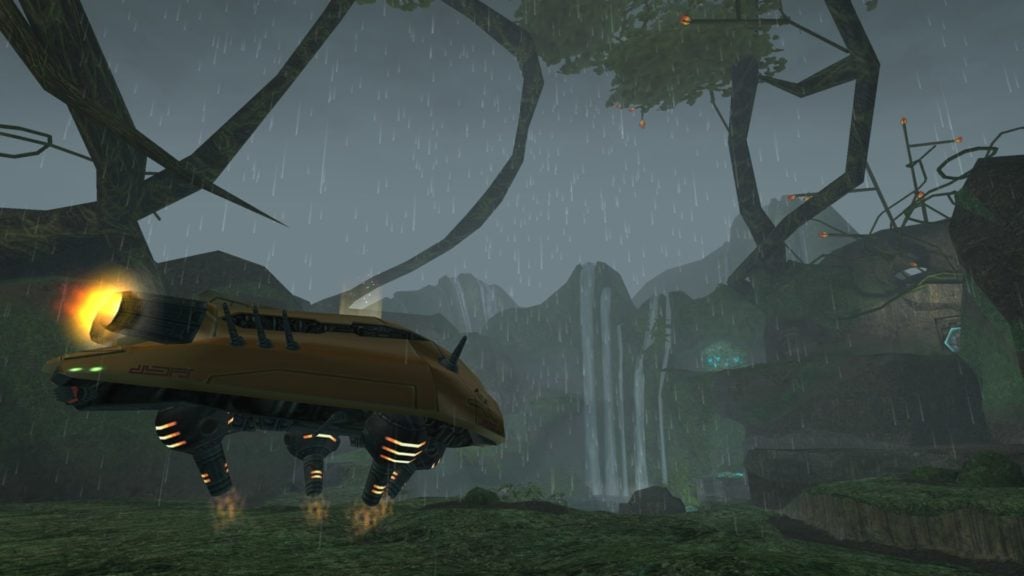 Though the Tallon Overworld may be lacking in story, its breathtaking environment more than makes up for it. After the Frigate Orpheon’s cold industrial interior, the lush and diverse greenery of the Tallon Overworld poses a striking contrast in setting and vibe, a little like leaving a long day at your 9 to 5 only to find yourself smack dab in the middle of the Olympic peninsula. Even fifteen years later, a first visit to the Tallon Overworld is still ravishing. And while the effect of raindrops splattering on Samus’ visor may not be as novel as it once was, it still envelopes the player in Metroid Prime’s world and first-person perspective, making even its weather patterns feel tangible and naturalistic in a manner few games succeed at even now.

The Tallon Overworld also features what is arguably the most elegant layout in all of Metroid Prime. While many of the game’s regions are either tediously linear or confoundingly complex and open, the confined sprawl of the Tallon Overworld makes traversal and navigation simple and empowering. Bar the layout of individual rooms (especially those with bodies of water and significant elevation change), getting from one region of the Overworld to another is almost always simple, quick, and purposeful due to the region’s branching but comprehensible layout. And while individual rooms like the Frigate Crash Site, Great Tree Hall, and Artifact Temple could have benefited from minor shortcuts, the region as a whole is tautly woven together. 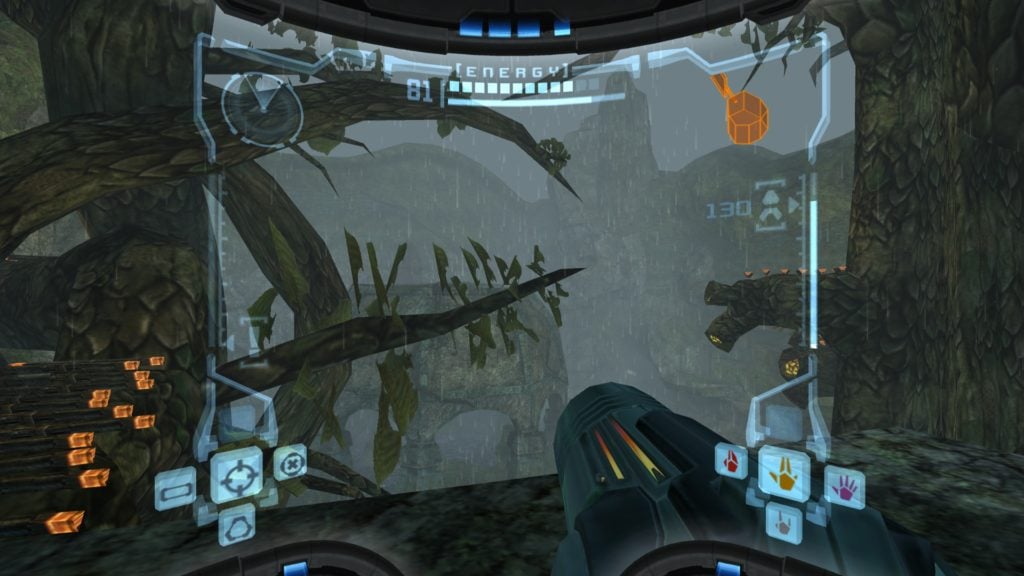 And since the Tallon Overworld is the most interconnected region (every region is accessible from there, minus Phendrana Drifts), it acts as a dependable bridge between regions that many players will consistently utilize. Its main downside in this regard is how abrupt it can feel moving from one region to another. For example, taking an elevator to Chozo Ruins can be jarring because it is also on the planet’s surface (so why take an elevator?) and its arid climate is worlds apart from the Tallon Overworld (so how fast is that elevator moving?). While this is a recurring issue throughout Metroid Prime, it sticks out most in the Tallon Overworld because of its thorough interconnectedness. Of course, it’s hard to penalize a 2002 game for such relatively minor ludonarrative dissonance, but if Metroid Prime 4 employs similarly abrupt transitions between regions in a post-Breath of the Wild world, they will stick out like a sore thumb.

This is exacerbated by the constant backtracking demanded by the late game artifact search, a tacked on fetch quest that adds nothing but filler. Because most players likely return to the Artifact Temple several times throughout their journey, and because running through the Tallon Overworld is often the most effective way to get from one part of Tallon IV to another, this region streamlines backtracking but also suffers from such frequent utilitarian visits. Fortunately, Metroid Prime 3 significantly curtails its endgame fetch quest, so hopefully the series is through with such flippant game-lengthening tactics.

In terms of pickups, the Tallon Overworld houses two artifacts, two energy tanks, nine missile expansions, the Space Jump Boots, and the X-Ray Visor. Most of these are well-placed, but it is worth mentioning that the Artifact of Chozo is tucked into a far-flung corner of the map and it demands engaging in an especially repetitious battle against the same Chozo Ghosts the player has encountered numerous times before. The Space Jump Boots are essentially Samus’ double-jump, and they open the game up smoothly and significantly. Though first-person double-jumping is tough to execute, Retro shrewdly thought to give the player substantial mid-air control and slightly tilt the visor downward for greater visibility. This is an incredibly nuanced and successful solution to first-person platforming that many games could still benefit from implementing. 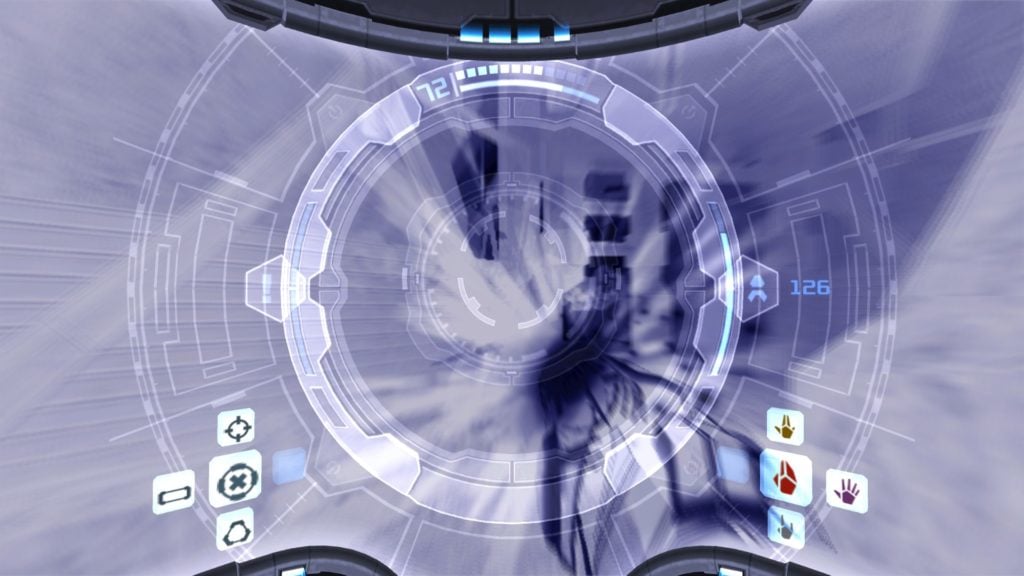 Unfortunately, the X-Ray Visor is more of a mixed bag. Much like Super Metroid’s muddied water, the X-Ray Visor feels like it was shoehorned into Metroid Prime without Retro asking how limited visibility in first-person might disempower the player. This leaves us with a tool that is almost never fun, interesting, or expedient, because it severely impacts the range and clarity of Samus’ vision. Furthermore, since hidden collectables can be virtually anywhere, the player is incentivized to use the X-Ray Visor in every room, leading to dull uses of the visor far more often than thoughtful uses, such as battling the aforementioned Chozo Ghosts. The visor’s poor design snowballs with its poor implementation to make for some of the most sloppy and boring parts of the game. The saddest part, though, is that minor adjustments to the visor’s clarity and range, along with slightly telegraphing which walls are see-through, could have made certain exploratory aspects of Metroid Prime much less choppy and robotic.

Regarding enemies, the Tallon Overworld features a whopping thirty-seven varieties. Although many are not scannable and many more are mere environmental flourishes, this rich diversity of flora and fauna creates a sense of inhabiting a living world with fleshed out ecosystems that make industrial regions like the Frigate Orpheon and the Phazon Mines appear especially artificial. Indeed, the wildlife of Tallon IV is undoubtedly one of Metroid Prime’s highlights, both because they provide senses of discovery, adventure, and immersion, and because this delicate, organic world-building underscores the game’s themes of naturalism, spiritualism, and the insidious underbelly of technological “progress.” While these themes are constantly reiterated through scannable lore, they are just as tangibly communicated when taking in the natural beauty and constituent lifeforms of regions like the Tallon Overworld. 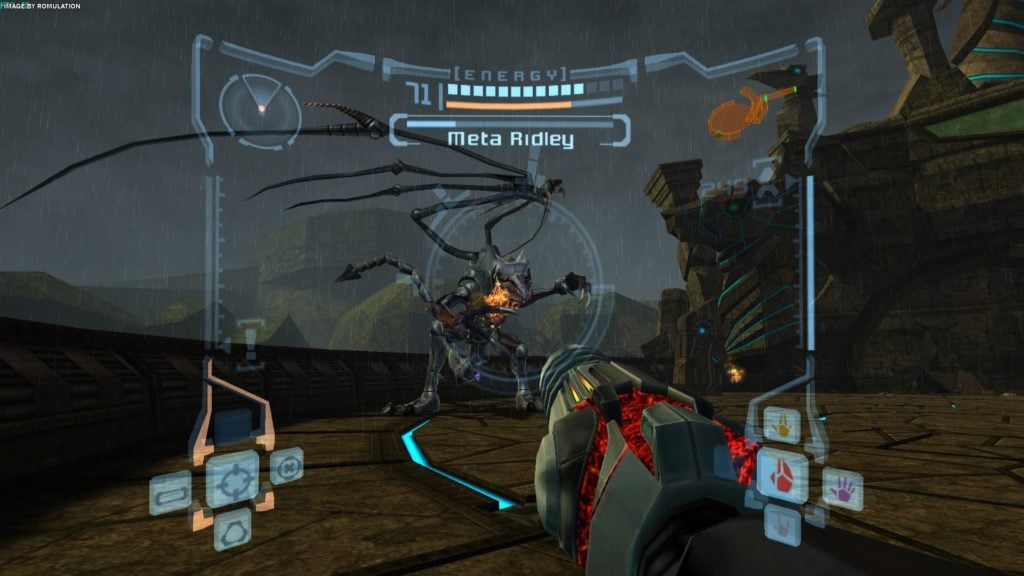 The Tallon Overworld’s token boss fight is against Meta Ridley, immediately before the game’s final gauntlet. The Artifact Temple arena, destructible environment, foreboding weather, and Meta Ridley’s speed and power all imbue the fight with a strong sense of climax and dread. However, it also falls short a couple important regards. For one, the fight is mechanically hit-or-miss, with a first phase that requires long wait periods while the second mostly just involves trading blows without any deeper strategy. All told, the fighting itself could have benefited from fewer wait times, a smaller health bar, less tough-to-read area of effect moves, and more complex, less predictable patterned behavior.

Much like Meta Ridley’s intro on the Frigate Orpheon, this final battle against Samus’ longtime nemesis curiously ignores their shared history. While a final confrontation against Ridley could have an emotionally impactful moment for Samus, thereby making the fight itself elegiac and redemptive, it instead treats Ridley like any other enemy, devoid of any meaningful context. Of course, it should have been made clearer that Samus chased Ridley to Tallon IV after the destruction of the Frigate Orpheon, and that Ridley is responsible for countless catastrophes Samus has been personally involved in, including the murder of Samus’ mother. With that sort of narrative backdrop, this penultimate battle and everything else involving Meta Ridley would have taken on greater significance and lent depth to the narrative and Samus’ motivations. In such a world, the battle arena’s desolation and rain could have acted as an expressionist manifestation of Samus’ deepest fears and longings. Instead, Meta Ridley comes and goes without much ado, in a generally enjoyable but generically action-oriented fashion that almost feels as if the developers just wanted to check the character of a list rather than give him the time and attention he deserves. 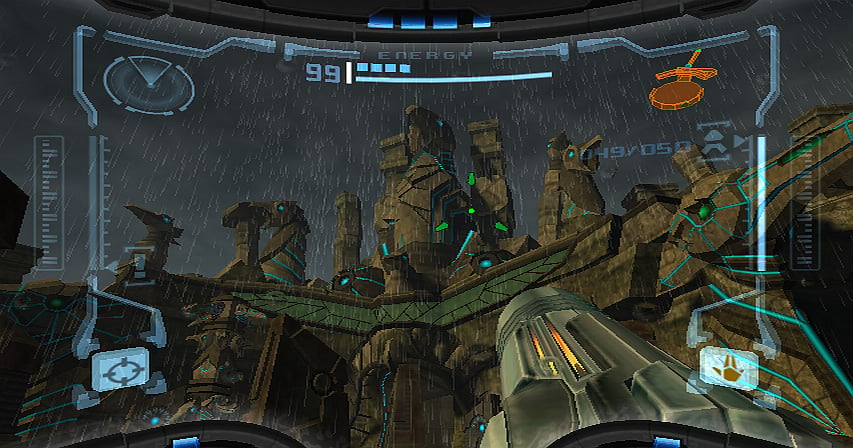 In a few regards, the Tallon Overworld seems slightly half-baked. Its storytelling is underwhelming, its boss battle a bit disappointing, and the X-Ray Visor a game-long drawback. However, the Tallon Overworld generally succeeds with flying colors in what it sets out to do: provide a memorable home base and immerse the player in Tallon IV’s natural beauty and ecology. That moment when the player initially disembarks from from Samus’ gunship and surveys the Landing Site is among the most memorable in all of Metroid Prime for its beautiful blend of realism and surrealism. And for console gamers like me who played the game back in 2002, it was clear at first glance that the world of Tallon IV would set a new high water mark for depth and detail in first-person games. To this day, the Tallon Overworld remains a region I feel reluctant to criticize despite its imperfections, as it somehow still manages to cast its enrapturing spell on me the moment raindrops first hit my visor.