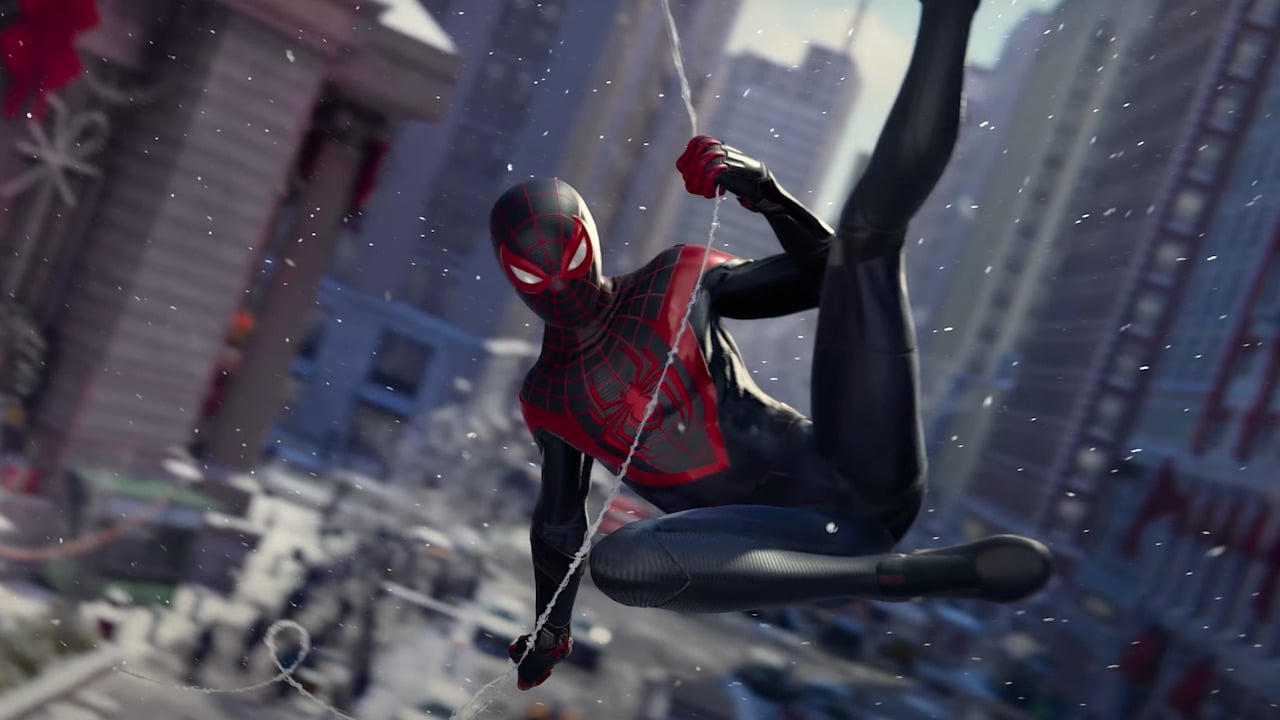 What makes a hero? The answer depends on who you ask: Batman enthusiasts would insist that a hero is one who follows a code and sticks to their vows, while James Bond fans would say it’s someone who gets the job done no matter what. In Marvel’s Spider-Man: Miles Morales, the latest PlayStation exclusive from Insomniac Games, the titular Miles grapples with a city’s worth of responsibilities. With fantastic gameplay, stunning visuals, and an affecting story, Miles carves his own path as he tries to find an answer to that age-old question.

2018 was a tremendous year for Spider-Man fans. Marvel’s Spider-Man was released on the PlayStation 4, a smash hit that reinvigorated superhero games with its incredible web-swinging and chaotic-yet-accessible combat. More significantly, 2018 also saw the release of the fantastic Spider-Man: Into the Spider-Verse, a contender for one of the greatest animated films ever made. While not his first appearance in media, Spider-Verse popularized Miles Morales to the point where he is now able to be a lead figurehead just in time for the PlayStation 5 launch.

Miles appeared as a playable character in Insomniac’s first Spider-Man game, however, he was not a fully-fledged superhero then. In Miles Morales, seventeen-year-old Miles is just getting his feet wet as New York’s latest Spider-Man, with a little mentorship from Peter Parker. After a stunning opening sequence that pits Miles and Peter against Rhino and a squad of escaped Raft criminals, Peter announces that he’s taking a little vacation and that he’s leaving New York in Miles’ sticky hands. What could go wrong?

A lot, as it turns out. With Murphy’s Law-like efficiency, New York is plunged into a gang war with catastrophic potential almost the instant Pete leaves. On one side, the radical Underground, a gang of tech-obsessed revolutionaries. On the other, the Roxxon corporation, led by smarmy Elon Musk analogue Simon Krieger, a group that seeks dominance of the energy sector no matter the cost. The Underground, led by the ferocious Tinkerer, will use any tactics they can to stop Roxxon’s expansions throughout Manhattan. Miles, as New York’s remaining Spider-Man, must learn the identity of the Tinkerer and discern whether Roxxon is really on the up-and-up.

Refreshingly, the story in Miles Morales is short and sweet. Where the first Spider-Man‘s plot was sprawling, Miles Morales feels pointed. Even though Miles Morales takes place in the same enormous map as the first game, it feels like Insomniac intentionally kept the story more focused. The result is a more curated experience. Rather than an all-you-can-eat superhero buffet, Miles Morales is content to offer a small-plates style chef’s menu: players might not be stuffed upon reaching the end, but the stuff that’s there is fantastic.

Miles Morales keeps the best parts of Marvel’s Spider-Man and ditches the padding. The combat keeps the rock-solid foundation from the first game while adding a few intriguing new twists. In addition to throwing webs, punching thugs, and executing finishers, Miles has access to a suite of electricity-powered moves called Venom strikes (not to be confused with Marvel’s symbiote with the same name) which can swing the odds in his favor during large combat encounters. He’s also got camouflage and several new gadgets, which keeps stealth encounters fresh. Miles may be playing in the same sandbox as Peter, but his toys are different, and that’s more than enough to keep this adventure feeling unique all throughout.

Miles’ Venom meter is built up by executing takedowns, landing punches, and performing dodges. After the meter is full, players can use Venom with a combination of button presses to launch enemies into the air, stun them, or disable abilities. It feels kinetic, a natural extension of Spider-Man’s abilities to dominate the battlefield. Miles hasn’t been Spider-Manning as long as Peter has, and his punches and kicks feels a little less powerful (that, or Roxxon and the Underground have thicker armor than the Demons from the first game). Venom helps even the playing field, and with the right modifications can be used to heal Miles and even set traps during combat. Spider-Man‘s combat was a highlight, and Miles Morales feels like a natural extension. The new abilities add another level of complexity to the already robust options available, but they never feel overwhelming to master. They feel necessary, too, with most boss characters requiring a combination of quick reflexes and Venom strikes to defeat.

Stealth encounters in Miles Morales feel similarly reinvigorated. The addition of invisibility is a tremendous boon. Miles can go invisible with the press of a button, and while it doesn’t last long, it makes getting out of tricky situations that much easier. Walking right in front of a Roxxon guard with a gigantic laser rifle while the camo meter depletes is a new kind of tension. It also helps give Miles a little bit of Batman flair; criminals suddenly doubting what they saw right before their eyes as the image of Miles melts into thin air never stops feeling excellent.

Standard combat and stealth encounters make up the bulk of enemy interactions in Miles Morales, but side missions make a return as well. This time, they’re accessed with a simple swipe of the touchpad, which opens up the Friendly Neighborhood Spider-Man app, developed by Miles’ “guy-in-the-chair” Ganke. NPCs will use the app to ask Spider-Man for help, everything from rescuing a window-washer stuck on the side of a building to assisting a bodega owner with finding his lost cat. And of course, there are still chances to drop in and stop random crimes occurring throughout the city as Miles swings between buildings. The app, like most things in Miles Morales, feels streamlined.

For all the minor changes and innovations made throughout Miles Morales, movement feels largely the same. Why mess with perfection? But with the DualSense controller and the power of the PlayStation 5, zipping through Manhattan feels more immersive than ever. The controller rumbles with every swing and the level of detail in every reflection in every glass window is jaw-dropping. Clinging to the side of a skyscraper and surveying Times Square while snowflakes swirl around him is all the evidence needed to justify the latest generation. Spider-Man looked great; Miles Morales looks unreal.

In the midst of an uncertain fall, playing Miles Morales feels like coming home. Miles Morales is about community and family, those you can’t escape and those you choose for yourself. It is earnest, a dose of optimism in a world that sorely needs it. Even when faced with overwhelming challenges, Miles is a strong character who embodies compassion. What makes this game special, a true can’t-miss experience, is its themes and characters.

There are a few returning characters and familiar faces. This iteration of J. Jonah Jameson, a debate-me-bro blowhard who has more in common with Rush Limbaugh than anyone else, returns with more incendiary podcasts. He’s more than willing to give Roxxon the benefit of the doubt and happy to blame any criminal activity on the presence of Spider-Man. Darin De Paul absolutely nails the character and voice and just might be the most iconic triple-J since J.K. Simmons. VO superstar Ashly Burch joins the cast too, as the up-and-coming podcaster Danika Hart. Her podcasts are heartfelt, funny, and incredibly nerdy. There’s a reason New Yorkers love her show, and her interviewing Miles and Ganke is an absolute delight. Troy Baker’s slimy Simon Krieger oozes plenty of punchable charm. Yuri Lowenthal returns as Peter Parker, and though his appearances are brief, they perfectly showcase the friendship and budding mentorship the two Spider-Men share.

The standout (and recent Game Awards nominee) is the voice of Miles himself, Nadji Jeter. It’s a marvelous performance, capturing the hope, fear, and excitement that comes with being Spider-Man. From sarcastic quips to throwaway lines to passers-by, Jeter’s performance is warm and inviting. He brings Miles down to earth and makes him feel distinct from any other version of the character out there. Animations help define Miles’ character even more. Whether he’s strutting around Harlem in his clean Timberlands or bobbing his head in time to the beat as he samples music from around the city, Miles always feels like a real person. Even when swinging through the city at breakneck speed, his body language suggests that he’s still got a lot of learning to do. It all feels incredibly endearing.

Players can easily believe that this Spider-Man loves his neighborhood and would do anything for its people. Miles Morales leans hard into the importance of community activism. Even in the face of relentless expansion from faceless corporations, small businesses fight hard for their right to exist, and Miles is right there with them to help every step of the way. It’s wonderful to walk around Harlem and see Miles’ favorite pupuseria and barbershop, and over the course of the game’s length it really feels like Miles makes connections with his neighbors.

Unlockable suits, a highlight of 2018’s game, make a return. Many of them are tied to completing side missions from all around the city, but they feel particularly poignant. The Uptown Pride outfit is particularly powerful, a nod to real-world community activists who fought against police brutality this summer in cities across the world. There’s also Purple Reign, the reward at the end of a long string of activities that helps Miles reconnect with his Uncle Aaron. These outfits allow for a little player expression, and one of the most awesome is the Spider-Verse suit and an accompanying mod that drops framerates. Combining these two unlockables helps the player feel like they’re playing a scene straight out of the excellent animated film.

The neighborhood of Harlem feels like a family, and navigating messy relationships is one of Miles Morales‘ key themes. Miles is still dealing with the loss of his father from the first game and seeing how he deals with his grief is a welcome change from other media with similar beats. He doesn’t wallow in grief, or use it to make excuses for how treats his friends. Instead, he grows. He reaches out to his estranged uncle with questions about his father or uses his experience to relate to his best friend Phin, who also suffered a great loss. He’s not a depressed vigilante or a revenge-fueled wrecking ball. He’s a teenager, just trying to do his best and be a normal kid. Being bitten by a radioactive spider was life-changing, but it’s just one of the things that define him, and that makes Miles a compelling character.

Maybe You Can Go Home Again

British journalist Ella Winter allegedly told author Thomas Wolfe that “you can’t go home again”, a phrase he liked so much that he used it as a title to a novel. But contrary to that statement, it feels amazing to return to the city that never sleeps as Spider-Man, albeit a vastly different one than that of Peter Parker. Miles Morales strips down the Spider-Man experience and the end result is a smart and satisfying superhero game more than well worth your while from both a gameplay and storytelling perspective. It looks and plays incredibly well, but the real star of the show is the lovable heart at this game’s core.