‘Spider-Man: Into the Spider-Verse’ Understands what Makes Spider-Man a Hero

It’s probably safe to say that no one asked for another Spider-Man origin story. Everyone knows Peter Parker’s history — take a radioactive spider, toss in a dead uncle, and fill to the brim with power, responsibility, and an overwhelming sense guilt. However, with Spider-Man: Into the Spider-Verse, it’s Miles Morales who is the focus. While he may be popular with comic and cartoon fans, Morales isn’t mainstream as his Parker counterpart — but don’t fret; his story is very close to Peter’s, only with a few alterations involving an unusual spider and a longing to be special. Regardless, Spider-Man: Into the Spider-Verse is neither an origin story nor a villain’s story; it’s Miles Morales’ story, about his discovery as to what it takes to be Spider-Man.


Superhero origins tend to focus too much on unnecessary exposition, and though there have been a lot of successes in the past, some of these movies have preferred to play it safe, to not stray off the beaten path. The problem with this method is that they lose valuable time for any real character growth and plot development. Audiences are quite smart, and they don’t need their hands held through every villain and hero’s motivations and decisions. Spider-Man: Into the Spider-Verse tries something new, and while on paper it sounds complicated, they do a good job at streamlining the plot.

After a device goes awry, alternate versions of Spider-Man are brought together to stop a threat that’s too big for only one web-slinger. Not only do the writers lampoon origin stories by quickly skimming through them in a unique and hilarious fashion, but they take a leap of faith and dive head first into Miles’ story. The other Spideys have been burdened with this power for a while and have learned to accept the responsibility thrust upon them. Miles, however, has only had it for a couple of days, and he has to face the biggest challenge: to quickly learn how not to take his opportunities for granted, and ultimately do what’s right.

Also, whereas most superhero movies use the villain’s big scheme as the plot, Spider-Man: Into The Spider-Verse pulls focus away from the villain’s dastardly deeds.  Though extremely well done, the villains are simply roadblocks to be overcome; their own stories aren’t as important as Miles’ is. His development and tribulations are the true driving force, and the creators behind this beauty understand that people want a Spider-Man movie — not to have their time wasted with superfluous moments.

Right from the start, Spider-Man: Into the Spider-Verse proves itself as a visual masterpiece. Some stills look like they’ve been pulled straight from a comic book, and at other times it looks like a top-notch animated film. The action scenes are vibrant and loud, and the quieter moments are serene, giving the audience time to breathe and appreciate the world. Every inch of the screen brings an animated New York to life; each  broken window, smudge, and piece of street art are placed with a detailed touch. Unlike animated movies where a lot of the characters and locations are drawn to look the same to save time, Spider-Man: Into the Spider-Verse goes out of its way to change things up. Secondary and background characters are distinct, from the shape of their face to the threads on their clothes.

Still, despite how beautiful it looks, there are times when too much is going on, making it a little hard to follow. These moments are few and far between, however, and the movie gives enough time to build up speed to appreciate the panels before the zaniness crashes through the frame like a freight train. 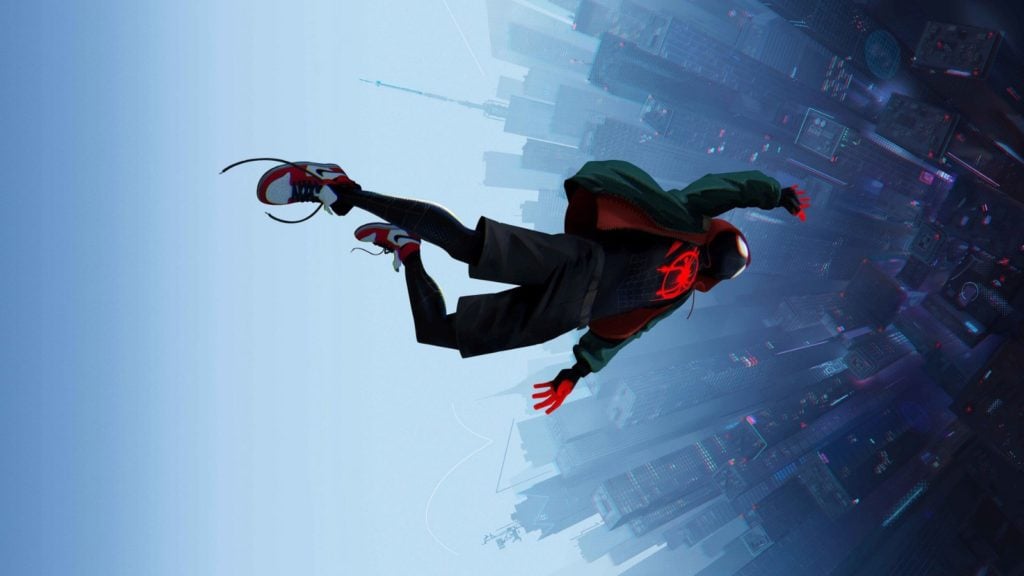 Spider-Man is not only Marvel’s most popular character, but he was Stan Lee’s favourite creation. Even with all his powers, he feels real, meant for everyone. Spider-Man: Into the Spider-Verse takes this to heart. By giving us versions of the Spider-Men that fans can relate with on a daily basis — they hit rock bottom, feel like they’re on the top of the world, and have to learn to be heroes. Even though they are incredibly different, they all share a commonality: an overwhelming responsibility to not only do the right thing, but to be better without comprising their deep-seeded morals. Every iteration has a burden of guilt they can’t seem to shake off, and they show a range of emotions, from fear and heartache to hope and determination. They laugh and cry. They are Spider-Man, and they are real.

For a film to have three directors, two writers, and a story that audiences might feel overly familiar with is usually a recipe for disaster. That it’s based on such a popular superhero also means that expectations are going to be high. The fact that Spider-Man: Into the Spider-Verse is able to overcome these problems is herculean. The actors and creators bring charm, humour, and depth to their characters in a visually exciting way. Miles Morales is a delight, as well as a refreshing look at the popular character. The art direction is superb, and though simple, the story is done with so much love that it will swing right into the heart of every Spider-fan.