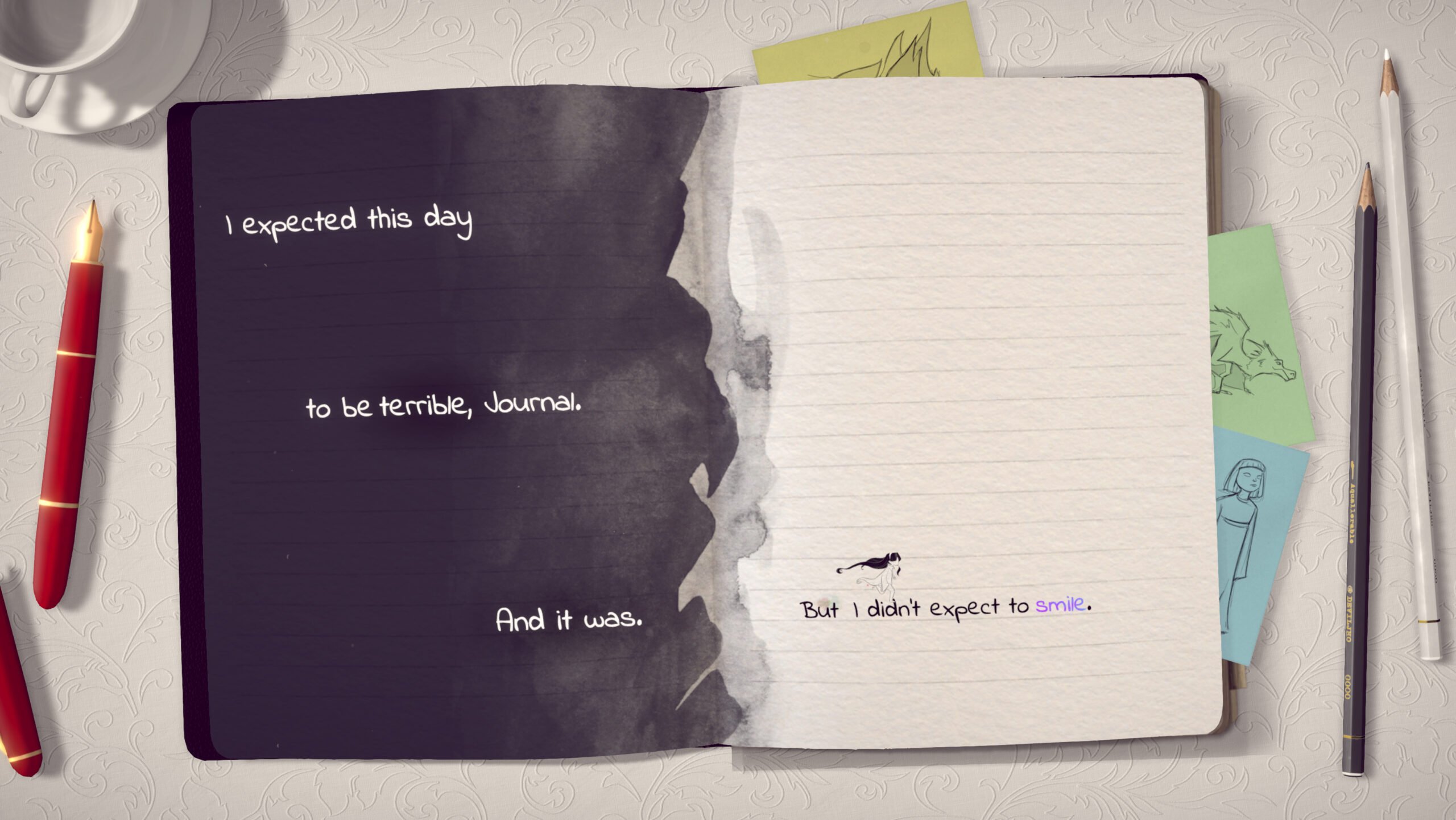 Lost Words: Beyond the Page, the emotional narrative platformer developed by Sketchbook Games, didn’t have it easy upon its original release last year–after all, it launched as one of those rarest of creatures, a Google Stadia exclusive. However, it has finally turned the page on its shackles to Google’s ill-fated streaming platform to reach a wider audience than ever on PlayStation, Xbox, Steam, and of course, Nintendo Switch. And that’s a good thing, too: its gameplay might leave something to be desired, but Lost Words truly finds its way in weaving a story that is equally heartwarming and gut-wrenching, an emotional rollercoaster that’s sure to resonate with audiences young and old.

Lost Words essentially tells two stories at once. It opens with a young girl named Izzy, an aspiring writer who spends her days scribbling in her diary. She writes about all the little mundane activities of her day, focusing especially on her quality time with her dear grandmother. Between conventional journal entries, she also tries her hand at spinning a grand fantasy yarn, telling the story of a hero on a quest to take down a malicious dragon. However, both her journal and her fantastical epic take a dark turn after she learns that her grandmother has suffered a stroke. What started as a tale of childlike innocence becomes a story of coming to terms with grief and mortality, twisting and turning through Izzy’s moments of doubts and ultimate reconciliation.

Poignant and heartfelt, the storytelling is easily Lost Words’ strongest aspect. Izzy herself provides the narration, and her stream-of-consciousness commentaries have all the simplicity, charm, and confusion that can be expected from a child learning to deal with her emotions for the first time. The narrative is touchingly down-to-earth, such that most players will likely find something that they can relate to during Izzy’s struggle. Its narrative continuously builds throughout the four-hour campaign, leading up to a breathtaking conclusion that perfectly resolves the heartfelt ups and downs of childhood mourning. It’s a genuinely beautiful story, one that tackles tough issues with ease and grace–players shouldn’t feel surprised if they have to reach for the tissue box by the time the credits roll.

Lost Words’ gameplay concepts intertwine with its storytelling to make every narrative beat hit even harder. During the sections where Izzy writes in her journal, players control a hand-drawn version of her that can jump over her words as she writes them, leaping and bounding across each page. Sometimes, landing on specific words will have a noticeable effect–jumping on the word “aquarium” might make a drawing of Izzy’s little fish tank materialize on the page of the journal, for example. Similarly, some words can be selected and moved around the page to reveal secrets, images, and help push her forward. These simple platforming sections have a major impact: every moment spent exploring her journal and helping her words burst into vibrant color makes Izzy’s struggles and reflections feel even more immediate, forging a strong connection between the player and the narrator.

However, the journal isn’t all there is to Lost Words: Beyond the Page. Players will spend most of their time playing through Izzy’s fantasy story, and while its handful of levels can have their clever moments, they’re not nearly as enthralling as the real-world narrative they’re tied to. As players control Izzy’s heroic persona, they’ll venture through outlandish realms on a quest to defeat an evil creature and restore peace to the world of Estoria. Much like the journal sections, Izzy’s hero can harness the power of words to change her environment and overcome the light platforming obstacles she faces. For example, players can pull the word “rise” from a magic book to make platforms levitate, or use the word “burn” to help torches burst into flame.

These fantasy portions are filled with creative potential, but they rarely capitalize on it. The magic word mechanics are genuinely clever and fun to use, but even by the game’s final level, they remain comparatively one-note. You’ll mostly encounter the same puzzles time and again–use “break” to topple down obstacles, “repair” to rebuild broken bridges, and so on. There could have been so many more ways for these spells to be explored–these words could have been used in tandem with each other or employed in many more varied scenarios. However, the mechanics rarely develop, such that the challenges faced in the final level are largely the same as those in the first. With strictly linear levels and scant few hidden collectibles to seek out, there’s not much to keep players’ attention on their quest through Estoria.

However, as with the rest of the game, these fantasy levels’ saving grace comes in the way they reconnect to the larger story. Izzy’s adventure morphs and mutates along with her real-world experiences, beginning as a childish, upbeat thrill ride before diving into dark reflections on sadness and personal inadequacies as her grandmother’s health takes a turn for the worse. Seeing cheery forests decay into desolate wastelands and innocent magical creatures transform to frozen, lifeless blocks adds another dimension to Izzy’s grief. Perhaps the gameplay underwhelms more often than not, but in further visualizing the emotional memories and reflections of the story, it ultimately makes the narrative even more impactful.

Tying up all these experiential and narrative threads is the game’s beautiful presentation. Whether it’s the watercolor 2.5D visuals in the fantasy gameplay or the lovingly hand-drawn doodles in Izzy’s journal, Lost Words is consistently a delight to behold. Its full voice acting makes things even more immersive, especially when it comes to Izzy’s admirable voice acting performance. It’s not always a completely solid technical experience, especially on Nintendo Switch–I encountered more than a few framerate hiccups plus a handful of jittering bugs throughout my time with the game–but overall, such minor issues don’t pose much of a problem in a fairly slow-paced platformer like this.

Lost Words: Beyond the Page is poignantly relatable and carefully compassionate in its touching exploration of childhood grief and growth. Its depiction of familial tragedy through the eyes of a little girl feels uniquely powerful, and its delicate intertwining of gameplay with the storytelling makes every narrative beat hit that much harder. Now that the game is no longer shackled to a dying platform, Lost Words is a shining and accessible example of how interactive storytelling can powerfully portray difficult and formative experiences.