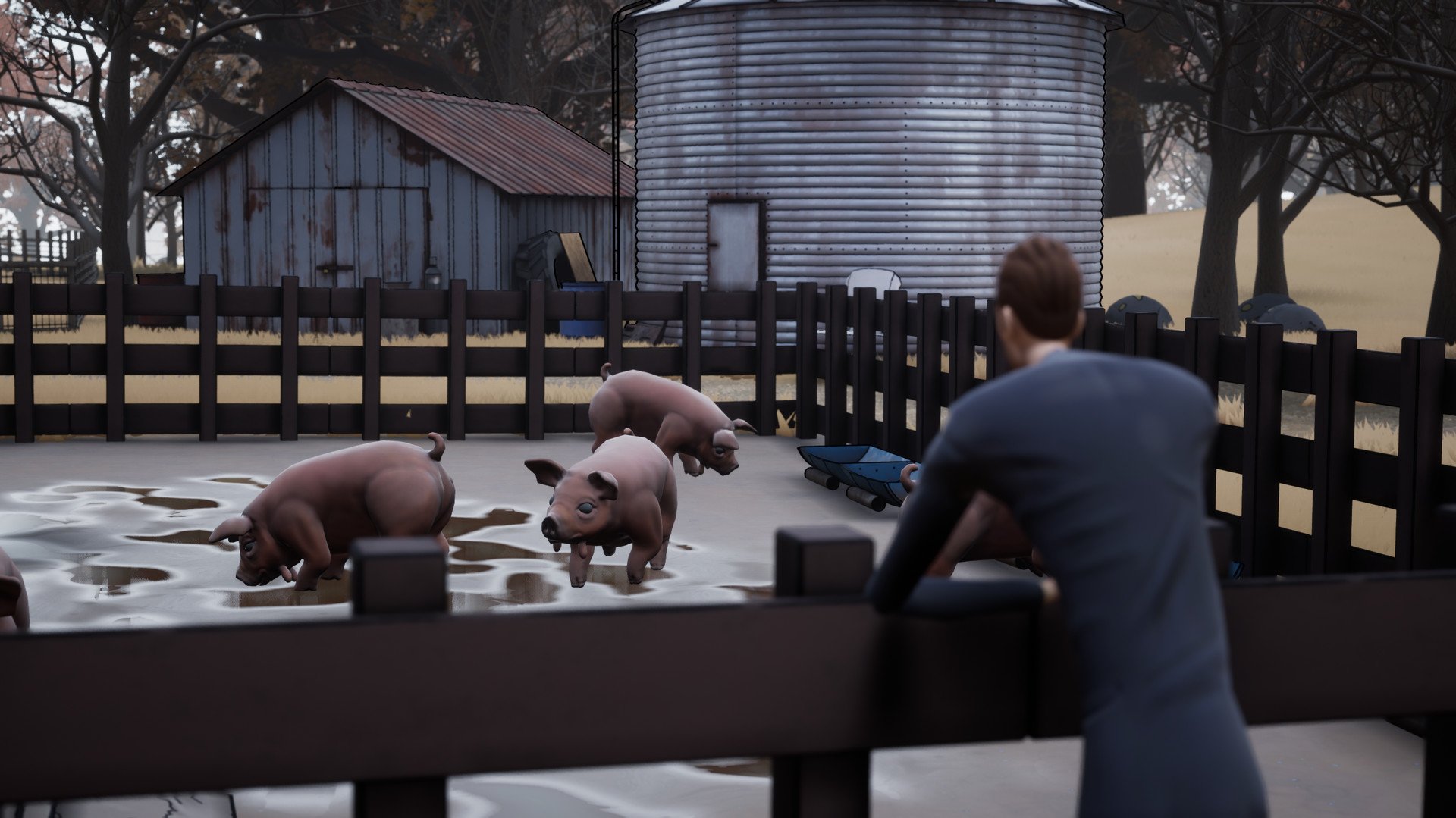 Adios is a quiet game. It’s a game about loss and choices and the consequences of those choices. It’s a game about saying goodbye. It’s somber and serious, but not morbid. Alternatively funny, endearing, entertaining, heartbreaking, and powerful, Adios packs quite a bit into its short runtime, but its excellent writing and strong performances make it a game that anyone interested in interactive storytelling should play.

Adios places players in the role of a farmer who has spent a long time working for the mob. When the mob needs a body disposed of, they bring it to him, and he feeds it to his pigs. The farmer, however, has decided that he isn’t going to do this anymore. So, when the mob’s hitman shows up with the latest body, the farmer tells him he’s done. He knows what this will mean; you don’t leave the mob. The hitman knows this as well, and given that the two are friends, he decides to stick around on the farm for a while to try to change the farmer’s mind in the hopes he won’t have to kill him.

In many ways, Adios feels like a stage play. The player moves between scenes – marked in the farmer’s notebook as a list of things to do  – and the farmer and the hitman talk. The point of these conversations is always the same – the farmer is trying to make the hitman understand his choice, and the hitman is trying to talk him out of it – but these conversations are rarely overtly about the farmer’s choice. Instead, the characters discuss the fate of the American chestnut tree, horses, the Vietnam War, family, and many other things. 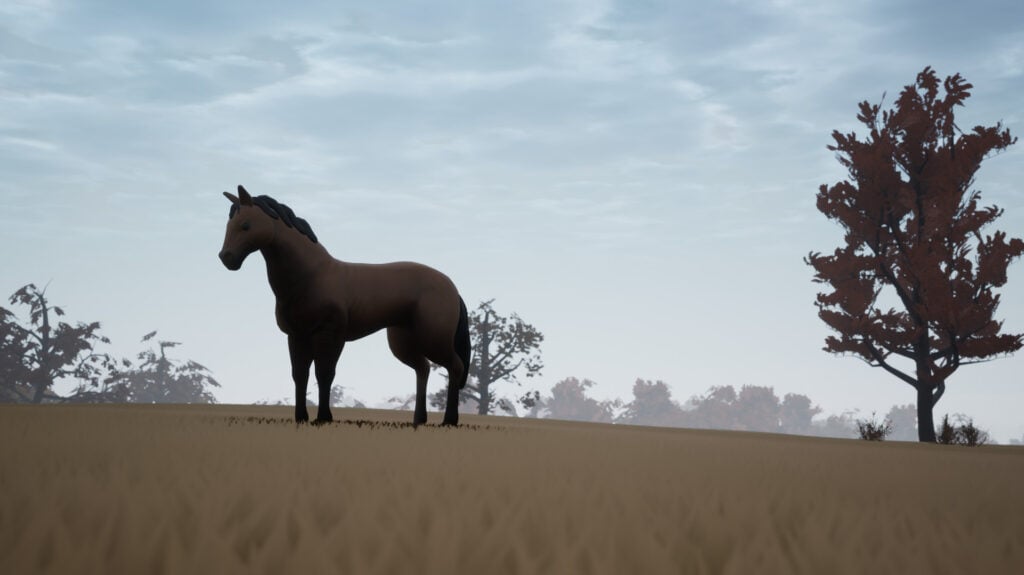 Adios’ highpoint is its writing, which is award-worthy, and the performances of its actors, particularly the hitman (DC Douglas) and the farmer (Rick Zieff). Video games often have problems separating the motivation of their characters from those of the player, usually because one is predicated on the other. The player wants the protagonist to succeed because that means the player succeeds. In many games, however, it’s difficult to tell what the characters want beyond “to save the world” or “to take down the antagonist.” The interior lives of many protagonists are startlingly empty and many games require the player to fill that void. But here in Adios, the distinction is clear: the farmer just wants to stop, even though he knows it will mean his death. The hitman doesn’t want to have to kill his friend. These motivations exist independently of the player, as do the actions of the characters. I didn’t want the farmer to die; I wanted him to change his mind, but what I wanted as a player didn’t matter. Adios wasn’t my story.

Both characters have interesting arcs: the hitman goes from gently trying to talk the farmer down to pointing out the solutions to the farmer’s issues. The farmer, meanwhile, often responds by talking about something else altogether and using these subjects to make the hitman understand why he can’t change his mind.

Finally, the hitman snaps and confronts the farmer about what his choice means, and that he’s essentially forcing his friend to kill him. It’s a small scene, but one with a lot of importance. There are no villains in Adios. Just two men trying to understand one another across a divide of life and work and experience. As the game goes on, and the farmer tries to justify his decision, it becomes clear that, despite his attempts to hide his feelings, his motivations aren’t quite as simple as he made out, and that the story at play is less about feeding dead bodies to pigs and more about grief, regret, despair, and the hope of atonement. 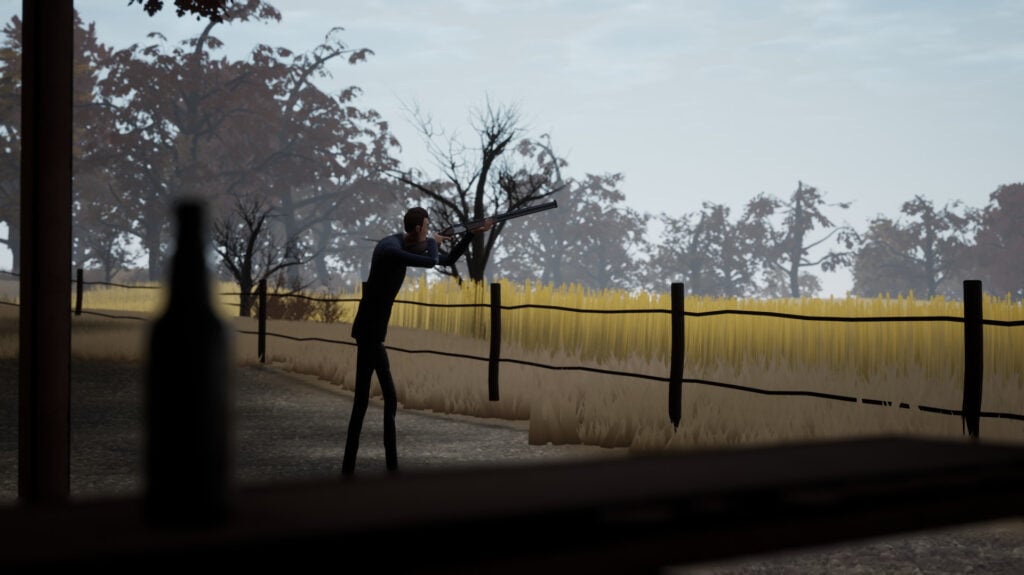 As excellent as the writing and performances in Adios are, however, it doesn’t always work as a game. Adios tries to give players something to do during its conversations, like milking goats, shoveling manure, or shooting skeet, but sometimes there’s nothing for the player to do except sit there and listen. The game also strains against its obvious technical and budget limitations. While the environments are often beautiful, the character models are extremely simple and don’t emote much, which can break immersion.

It often feels like there’s no reason for Adios to be a game at all, and it’s easy to wonder if it wouldn’t have worked better as a film, short story, or play. Still, the moments where it does make use of the medium, such as one scene where the farmer wanders the house and can interact with objects or play scattered tapes and records, work well as moments of reflection and environmental storytelling. By far the best use of the medium’s strengths is when the player is given access to greyed-out conversation options during dialogue. The farmer won’t read these lines, but they’re what he wants to say in those moments and can’t. It’s a clever take on a common system and another way Adios effectively gets inside its characters’ heads.

Adios’ gameplay is limited, and it suffers from some technical issues, one of which forced me to restart a scene to get it to work. Nonetheless, the story told here is compelling. It’s a simple game, but what’s not simple are the issues it explores and the choices its characters make. Adios is a linear narrative, but it’s also one with a lot of ambiguity, one that asks players to read between the lines and make their own choices about what they’ve been a part of and what they think of it. Adios probably doesn’t need to be a video game, but it is still worth playing for anyone with an interest in interactive narratives, and one many players will likely continue to think about long after the credits roll.

Will Borger is a Navy brat who has loved storytelling since he’s been able to read. He received a B.A. in English from the University of Central Florida and an MFA in Fiction from Sarah Lawrence College. A man of many hats, Will has served on the staff of several literary journals, taught writing at two universities, and is the Editor-in-Chief of Film Daze. He writes about games and film at GamingBolt, GameCritics, GoombaStomp, and The Twin Geeks. His fiction has appeared in Marathon Literary Review and Purple Wall Stories and has been nominated for the Pushcart Prize. Will lives in New York with his wife and dreams of one day owning a dog.