“You folks happen to know what the main trouble with this country is? The main trouble is there are too many people who don’t know where they’re going and they want to get there too fast.” – The Bishop’s Wife, 1947

While the idea of slowing down might seem to contradict the very point of a racing game, developer Wee Man Studios might have benefited from a little more rose-smelling on the way to producing Lifespeed, a high-speed futuristic vehicular competition in the vein of F-Zero or Wipeout. Twists and turns come up fast in this genre, but disorientation is usually reserved solely for the course, not the entire experience. Without enough straightaways in which to savor the moment, Lifespeed‘s mostly-solid controls and sometimes-nifty visuals are heavily undermined by a confusing story campaign that zips by in the blink of an eye, some dubious track design, and odd flaws in the overall polish that keeps players guessing at even some of the basics, unable to truly get their bearings until it’s already over. The result is a life on the circuit that fades from memory as quickly as the finish line approaches.

Taking place in a distant future where galactic disputes over resources are settled by sweet, badass racing, Lifespeed‘s story starts off just ridiculous enough to warrant interest from the kind of C-movie fans that enjoy SyFy movies, but unfortunately that giggle-inducing potential is squandered fairly soon by incomprehensibility. Comic book-style art panels attempt to explain the plot and showcase the various heroes and villains, but the text is scatterbrained, never establishing a proper setting or even character intros. Instead, captions and dialogue bubbles haphazardly zig-zag from plot point to plot point, dishing out jargon that might sound cool if the context wasn’t so glossed over. It doesn’t help that the text is often riddled with grammatical errors, including misspelling of a few words. This makes it almost necessary to read each line twice if one is to decipher exactly what’s going on. Though the artwork is rather nice to look at and the presentation gives off a slick, conspiratorial vibe, by the end I really had no better understanding of what transpired than the initial synopsis gives. By attempting to cram to much into too little, the story comes across often simply as a “someone is racing against someone else because someone doesn’t want some other person to win or something” kind of plot – rushed and not very compelling. 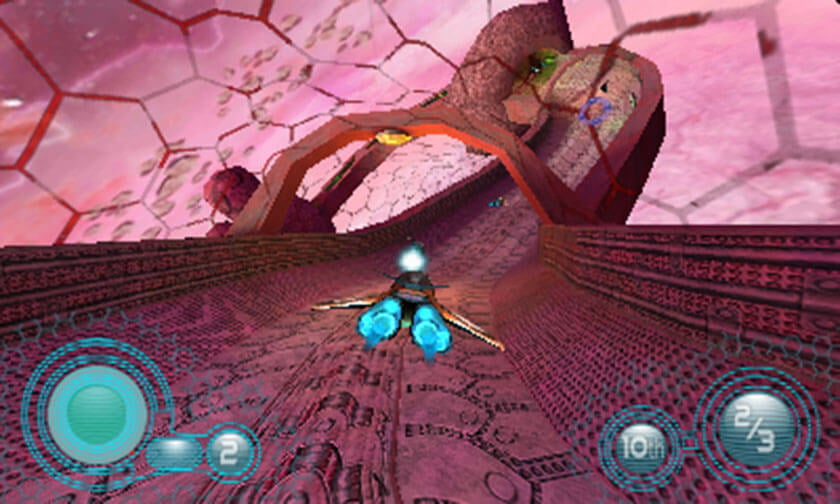 It’s doubtful that many people boot up racing games for their stories, however, and thankfully Lifespeed comes up somewhat better in the gameplay department. Piloting the vehicles is reasonably intuitive, sticking to the fundamentals. Racers will use all the space given in the corridors, moving up and down as well as left and right, allowing for obstacles that force ships to weave in and around the screen. Naturally, the genre requires fast reflexes or course memorization if certain collapsing walls or missile-launching booby traps are to be avoided, so get used to seeing your ship tumbling around. After some practice, however, those various tight turns and tighter squeezes become much more doable, and when Lifespeed is firing on all cylinders, navigating the winding loops and blasting through a narrow tunnel feels great.

Still, a few quirks do meaningfully hold tracks back. The 3DS’ small screen (note that the game is only playable on the “New” model) certainly makes being an Anakin Skywalker a little tougher on its own, but some course layouts contain cheap traps that would be impossible to spot without knowing they were there in the first place, and even then can be tough to react to. Getting stuck on geometry is fairly common when missing the mark, and occasionally invisible forces that never make themselves clear will stop a fantastic run dead in its tracks. These aspects contribute to even more discombobulation, as at times they seem unavoidable.

The visuals themselves also contribute. Though there are some very pretty sights take advantage of the power of the hardware, like a cityscape filled with colorful advertisements and passing freight ships, the colors of tracks and backgrounds often blend together too much, with the resulting lack of distinction leading to disorientation and the kind of stupid crashes that destroy momentum. These sorts of annoyances don’t add up to much on the game’s easiest setting, but when competing on normal difficulty (or higher, if your a masochist), where ships are stronger and faster, frustration can quickly mount, and there is a sense that much of this could have been easily avoided. 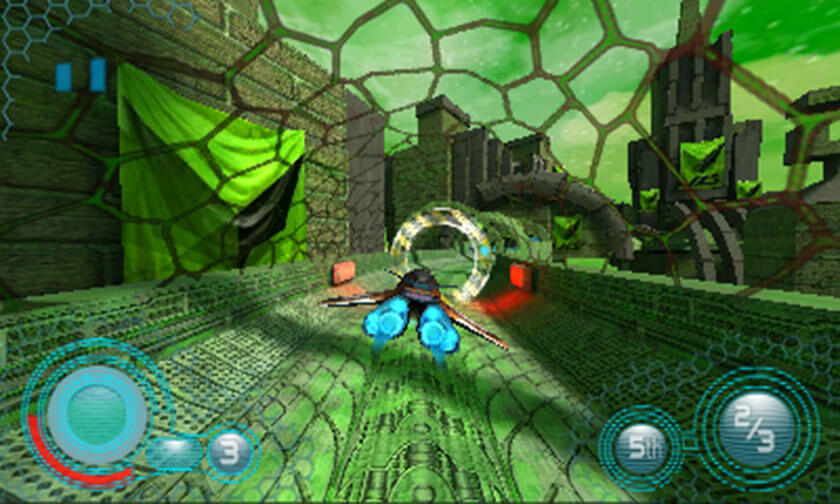 That feeling is also reinforced by some odd design choices that affect the overall user-friendliness. Curiously, Lifespeed thrusts players into the battle for the fate of the galaxy (I think?) without explaining some of the basic powerups and abilities these ships have access to. Instead of a tutorial that slowly introduces what the multitude of colored rings do, how different weapons work, or even which button allows you to brake(!), these concepts are only doled out post-race, one at a time. However, to advance to that info screen, a ranking of third or higher must be achieved; anything less necessitates a complete restart. This means that for a player to understand all of the controls and items present in Lifespeed, they nearly have to beat the game. Mastering these skills may not be necessary in Rookie mode, but it’s still a little strange. I know the purple ring gives me power, but what exactly is that for again?

In addition to the short campaign, players can take on the game’s eight tracks individually or as a championship season that basically mirrors the story mode, but without the story. Different pilots and ships can be experimented with here, and online leaderboards display scores achieved in each setting. There’s not really much else to Lifespeed. Fans of the genre may enjoy tackling higher difficulty levels and racking up points, but the hour-long campaign will have most players seeing the checkered flag all too quickly, possibly not even sure how, and leaving not much else. Lifespeed never allows racers to settle in, and as such leaves no real impression of its own, just another hazy memory.