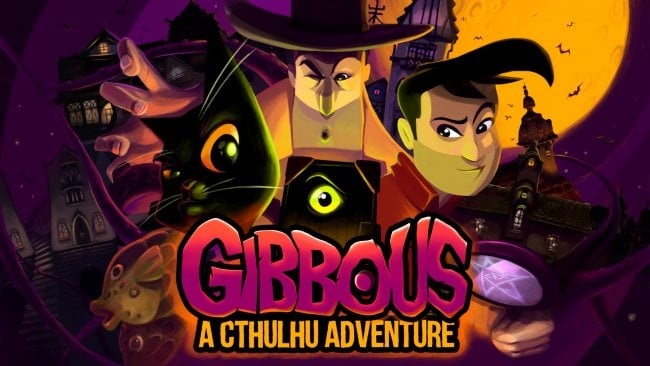 I miss the old-school adventure games from the LucasArts age of PC gaming, a golden age for point and click games. Alas, those times are gone, as Mickey lets EA have its way with the remains of the Star Wars gaming franchise. All I have left now are fond memories of psychotic rabbits and skulls telling me to cringe in terror as they explain how they will take over the world with no body. All hope is not lost, however, for when a door closes a very small window opens! The indie field has taken up the challenge to fill the gap left by LucasArts, perhaps not very well, but they’re trying. Broken Age was a good start even if it trailed off towards the end and was about as funny as Adam Sandler’s last few movies. A new Kickstarter named Gibbous: A Cthulhu Adventure by Stuck In Attic has a lot of potential, though. A point-and-click game extremely dedicated to the spirit of Monkey Island, it has laughs, memorable characters, and even a talking cat. Oddly enough, the cat seems to be just as bossy talking or not. Interest piqued, I spoke with the developers at Stuck In Attic and had the great interview below. 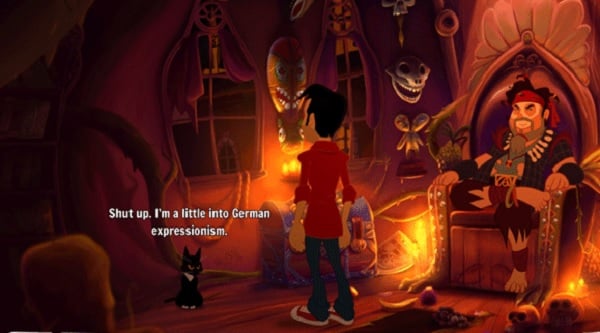 GS: Where did the title Gibbous come from?

SIA: “Gibbous” is one of those very Lovecraftian words – it refers to one of the lunar phases, but it also has the second, less obvious meaning of “only partially revealed”. Without going into spoiler territory, this theme of things only partially visible – or, indeed, real – will play an important role in the game’s story line.

GS: As someone with a minor grasp of H.P. Lovecraft works, how much influence will his works have over the game’s story? Will players unfamiliar with Lovecraft have trouble understanding anything or risk missing details?

SIA: We’re making a point of having Gibbous be an enjoyable experience for Lovecraft aficionados and newcomers to the Mythos alike. The story will make sense for people with no previous knowledge of his work, and the buffs will appreciate the nods to his well-known themes, characters and settings.

GS: Does being from Transylvania provide you with an edge in the horror genre?

SIA: Yes, but not in the most obvious way. Being from Transylvania is a fun thing to mention when you’re working on a comedy horror game, but really this will play more into the tone of the environments –  they are inspired by the nature and architecture we grew up around, rather than the typical New England setting. We are not ignoring local supernatural folklore, though – it will surely find its way inside Gibbous.

GS: While you name a lot of different inspirations, is there any single book/game that really inspired the making of Gibbous?

SIA: Probably Lovecraft’s The Shadow Over Innsmouth, my favorite work of his – as far as games are concerned, other than the classic Lucas Adventures we list as role models, it has to be Call Of Cthulhu: Dark Corners Of The Earth, a loose adaptation of the aforementioned Shadow Over Innsmouth.

GS: You mention that the game will have three playable characters; does gameplay change at all between each character?

SIA: The two human characters each have one special ability other than your classic “examine” and “use”. Buzz’s is using Kitteh to his advantage. We’re still working on Don’s, but it will be equally fun. 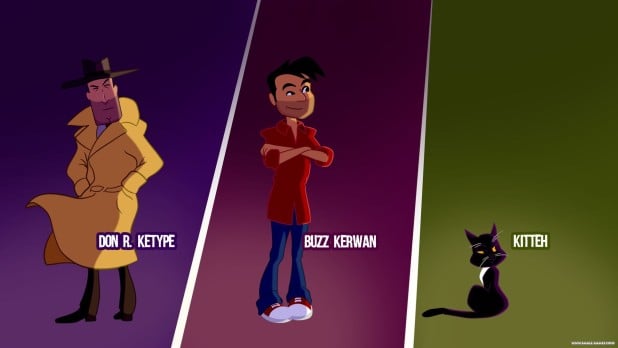 GS: It is mentioned that the beautiful settings are based on actual locations, with a Lovecraft overhaul. Is this true for the entire game?

SIA: Yup, absolutely. You know how they say “write about what you know” – well, I’ll be drawing what I know. I want the plot to also have some of the characters actually traveling to Transylvania, too, so that’s where the local flavor will ramp up even more!

GS: While the demo made it very clear that I couldn’t combine items, is this an option in the complete game? What other puzzles can be expected?

SIA: I’m very much a lover of classic Lucas Arts adventures, so that’s a good point of reference: dialog puzzles, combining items… I’m considering throwing in some experimental stuff, too. One thing Gibbous will probably stay away from are vocation-related puzzles (like musical ones) , or ones that are not considerate of visually-impaired players.  It will be a game most people should be able to enjoy without stress or hassle.

GS: How crazy are puzzles in this game; in other words, Monkey Island huffing paint fumes crazy or just Grim Fandango levels?

SIA: We’ll be tackling the difficult task of trying to find a sweet spot that satisfies hardcore adventurers and folks new to the genre alike. I myself prefer them on the lighter side, but what we will do is make them fair by providing lots of hints in the environments . Encouraging the player to explore his surroundings is one of the things we’re emphasizing most.

GS: With such a wide variety of colorful characters already demonstrated, how many more can fans expect? Will they all have spoken dialogue for the most part?

SIA: Expect more, and better! There are so many cool characters I can’t wait the players to meet and have fun with… This is one of the reasons we are relying on our generous Kickstarter donations.  Buzz alone had 700+ spoken lines in the demo, you can imagine just how verbose the final release will be…

GS: While I love the fact that there are multiple custom responses, just how many responses are in this game? Will every option have multiple responses?

SIA: Yes, this is something I’m very adamant about. It will wreak havoc on our voice acting budget, but I wouldn’t have it any other way. If we don’t hit our “ultra fully voiced” stretch goal, a lot of them will remain in text mode (character’s thoughts rather than spoken words), but they will definitely be there, and there will be heaps of them.

GS: Seriously though, why isn’t Murray in this game?

SIA: He was busy terrorizing the afterlife, plus –  him clashing with Cthulhu… That’s the end of the world right there, no matter what heroes you throw at’em.

GS: What is the games runtime? The demo was a good length but appeared to be the beginning of the game, which seems kind of short in retrospect. Does the game have replay value?

SIA: We are shooting for anywhere between 8 and 12 hours, depending on whether the player takes his or her time or rushes through. Replayability: you might want to go back and play it again just to choose that goofy line you hadn’t before and see what the punchline is. I’m that kind of player myself.

GS: Is it ironic that Kitteh is the boss, talking or not?

GS: While the frame-by-frame approach looks great and reminiscent of old school Lucas Arts, it does take a long time to make. How much of the game is already done, and how much is left to do?

SIA: Yes, frame-by-frame animation is a slow and meticulous task, but we wouldn’t have it any other way. I have a general outline of the plot, several environments, and a slew of characters already designed and written – how well we are funded will decide just how many of these dubious Mythos types make it into the final game. 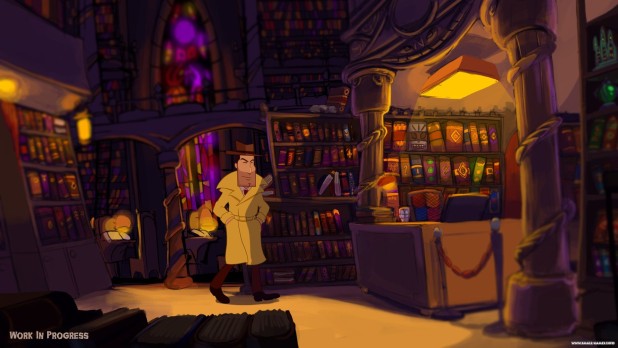 GS: Will the game feature any animation or cut scenes?

SIA: There will be plenty of in-game animation. We don’t know yet about the cut scenes – we do have a stretch goal for that; if we don’t reach it they will still exist, probably in the form of a limited-animation motion comic.

GS: If funded, what do you hope to get out of making Gibbous: A Cthulhu Adventure?

SIA: Fame, glory and an honorable membership of the Esoteric Order of Dagon. But, seriously – what we want most is to get as many adventure fans as possible to enjoy it, and if it brings them a tenth of the joy classic 90s adventures brought to me, I’m a happy point and clicker.

GS: Are there any plans for future games already?

SIA: Nope, Gibbous is our one and only child. A horrible, feline-eyed and tentacled child, but we love it either way, and really hope you guys will, too!