‘You May Have Missed’ is a series of indie gaming recommendations from the Goomba Stomp Staff on underground masterpieces, hidden gems, or just games you may have missed.

HunieCam Studio came as a complete surprise when it was announced back in 2015. Developer HuniePot was just coming off the heels of its massive debut HuniePop, and everyone was expecting a sequel (heck, even the devs themselves joked about the unwanted spinoff in its debut trailer). HuniePop was the first modern PC game that I truly fell in love with, and I certainly wasn’t the only one. The puzzle/visual novel hybrid was lauded for its addicting gameplay loop and surprisingly high production values (especially for a game funded on Kickstarter). The 2D art rivaled any other visual novel on Steam, and the soundtrack is still one of my all-time favorite OSTs in any game, period.

Despite its bonafide quality, however, it was Huniepop’s hyper-risque art and objectives around sleeping with women that truly helped it garner attention and become a massive success. Though this lead to the common misconception that anyone who enjoyed the game only played it for the nudity, it also meant that HuniePot had some capital to create a new Hunie game. The decision to create a spin-off before a proper sequel threw a lot of fans off, myself included. It wasn’t until recently that, after staring at the game long enough in my Steam library, I finally decided to give it a chance. HunieCam Studio is a noticeably smaller scale project than its predecessor, but it still shines with just as much polish. The name of the game is managing a variety of cam girls–some from Huniepop, others completely new–to earn as many fans online as possible. Each girl (including series mascot Kyu, who serves as the player’s manager) is fully voiced and portrayed in high-quality 2D portraits that can be customized via unlockable hairstyles and outfits. Players need to effectively coordinate these girls between performing in cam shows, gaining new followers via photo shoots, buying items to unlock new viewer fetishes, and a host of other tasks to gain boatloads of followers.

If this premise sounds completely despicable and offensive…well, it is. Studio founder and franchise writer Ryan Koons’ blunt and twisted sense of humor is in full effect here. Is Tiffany not bringing in enough fans with her base talent level? Send her to the strip club to learn new dancing skills. Did the insufferable Audrey run out of smokes or alcohol again? Pick someone to run to the store and buy more to feed her addictions. Has Aiko contracted an STD after sleeping with a patron in the nearby motel? If it’s curable, medicine can be bought. If it’s AIDS, she literally can’t do anything anymore. Horrific as these scenarios might seem when written, they somehow become a bit more lighthearted when put against the colorful, cartoony backdrop of HunieCam Studio. 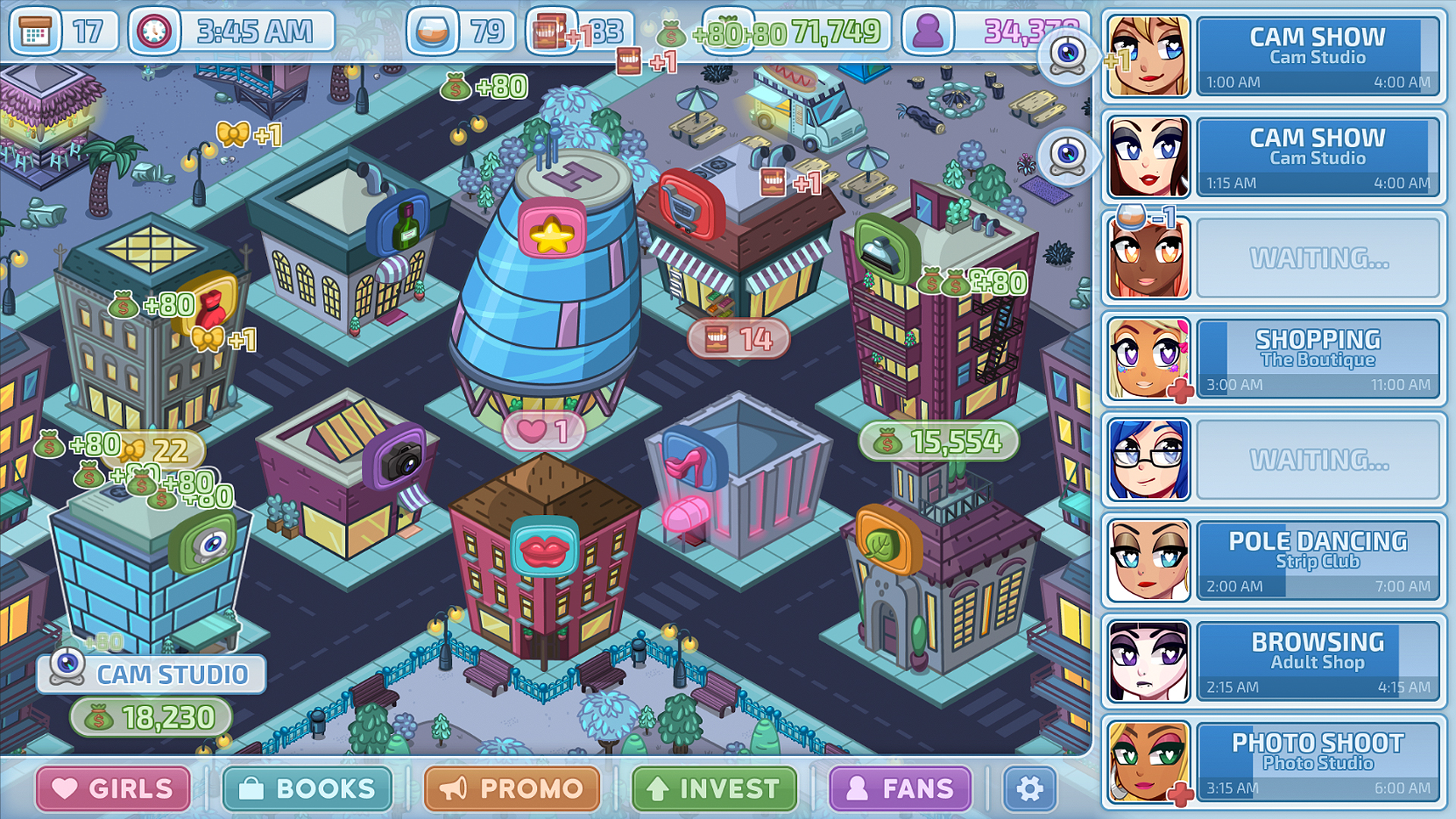 Each game of HunieCam Studio only lasts for 21 in-game days (about an hour and a half of play time per session). As someone who usually likes to game at his own pace, I typically get really stressed out by countdown timers. However, there’s just something about HunieCam Studio’s inviting presentation and addictive gameplay loop that never fails to give me that “one more game” feeling. The endgame trophies (as gross as they may be) and unlockables for the girls make for great replay incentives, and the fact that most players probably won’t unlock all of the 18 girls until their fifth or sixth playthrough is a smart and quite natural way of giving the game some longevity.

So why do I recommend picking this one up? Personality. Just like Hunipop before it, HunieCam Studio is yet another testament to this dev’s incredible ability to create games that feel unique, polished and handcrafted. I laughed, I gasped, and I winced. If you can stomach a bit of raunchiness and don’t mind it showing up on your Steam profile, treat yourself to this game.