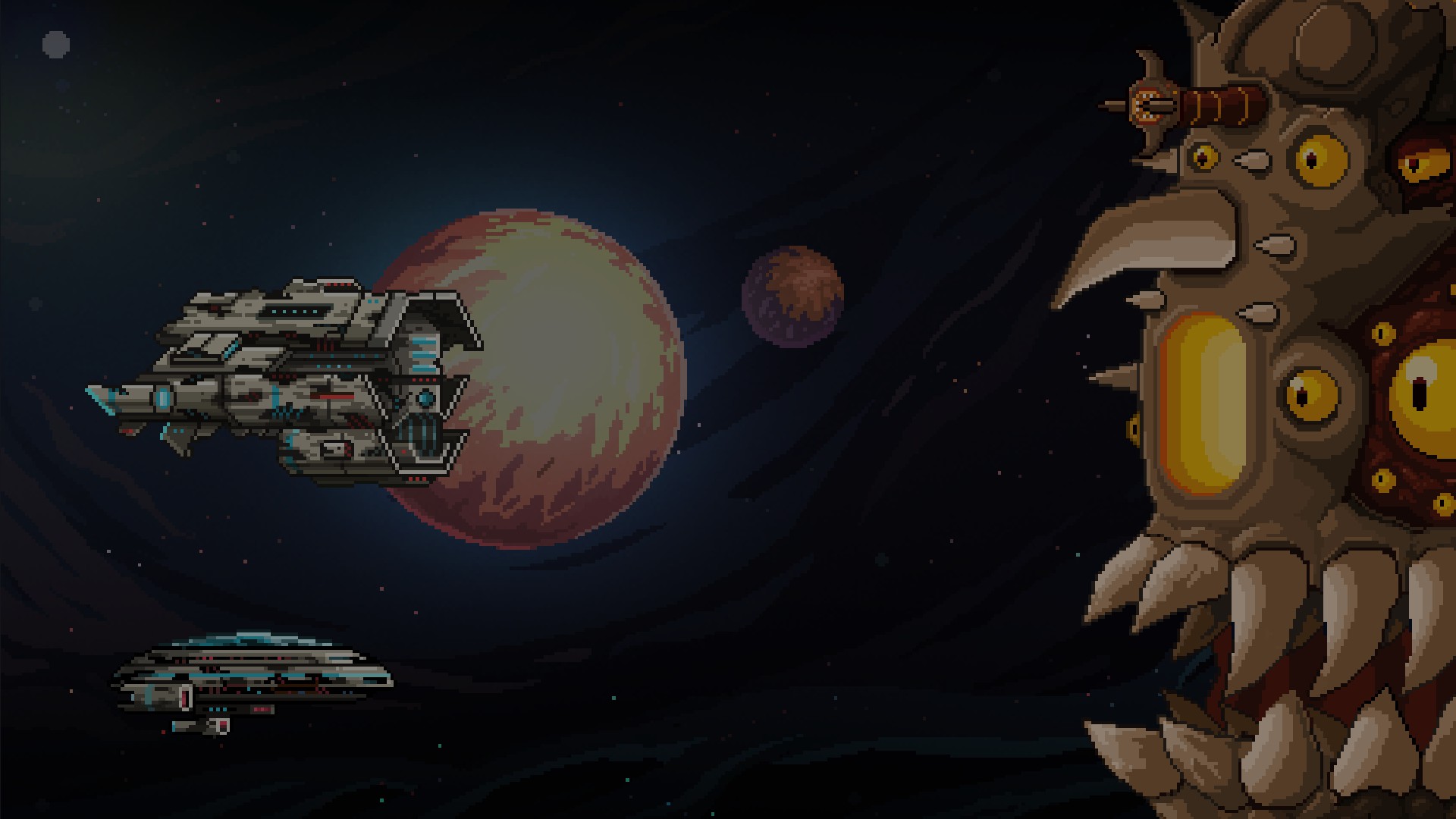 What do you get when you add X-Com, Persona, FTL, and Mass Effect along with a bit of help from the Government of Ontario and a Kickstarter campaign? Halycon 6, a game attempting to be many games while also being its own game. Is this just a hard-to-pronounce jumble of messy ideas, or a deep space experience of its own?

So, the good news is that you are the new commander of the experimental alien starbase Halycon 6, an installation that’sbarely working and still infested with unknown entities. The bad news is your position comes from the untimely death of your previous commander at the hands of an unstoppable trans-dimensional alien horde that’s hurtling towards Earth. Also your base is the only line of defence, and in the collapse of the Terran Federation in the sector, every pirate, alien, and AI collective is now gunning for your base and the secrets it holds.

So you have some work to do.

Despite the setup, the plot of Halycon 6 never really evolves, preferring to bring out the story in a few brief instances. Instead, most of the writing focuses on side quests and your interactions with the various factions of your sector. It’s here that the writing and the humour shine. The faction leaders you interact with are dripping with character, from the various pirate leaders vying for control to the AI collective that can’t process emotions properly. It’s also here you’ll be able to make decisions on who to fight and who to ignore, and each faction will offer you rewards for flying their banner, often in the form of resources to upgrade your base. 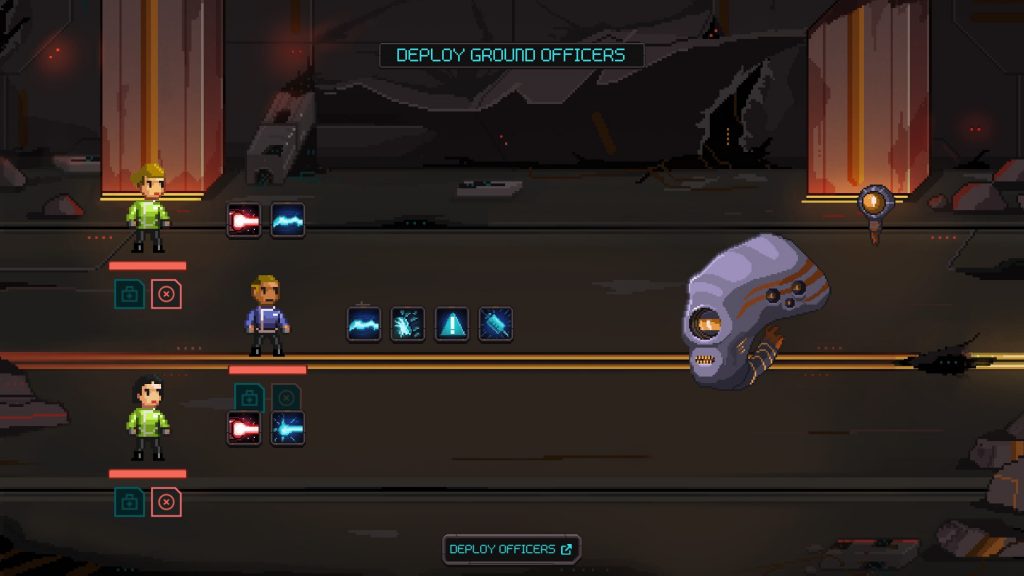 Cleaning up Halcyon 6 can occasionally lead to infantry combat

Gameplay is split between management and combat, much as you’d expect from a game that takes inspiration from X-Com. On the management side everything is nicely laid out and easy to navigate. You can explore the rest of the station to unlock additional rooms, allocate your captains to research and develop new programs, invest in upgrades for staff and equipment, and manage where you want to send your fleets to next. Its this last option that’ll take up most of your time, and the major moving force in the game is the ever encroaching alien forces. Resources to run your operation come from the surviving human bases in the sector, which you’ll need to send your fleets to in order to collect. The Aliens are aware of this and will constantly attack these bases, and it’s up to you to decide which ones you can save and which ones to abandon.

If you do decide to try saving a base you’ll experience the other half of Halcyon 6, the combat. At the top of the review I mentioned the Persona series and that was deliberate. The way combat works is that nearly every attack, yours and theirs, has both an effect and an exploit. Effects get added to ships, and exploits do bonus damage when you use the right attack. So when your engineering ship cracks the hull of an enemy and your combat vessel fires a missile, that missile now does bonus damage. 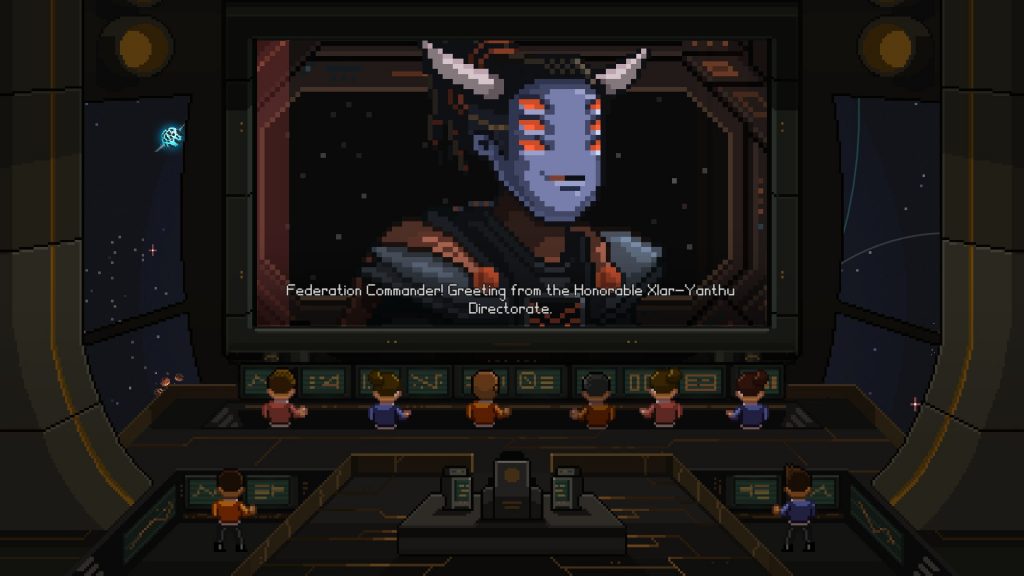 Faction leaders will contact you via holoscreen, so you can live out your inner Picard

Figuring this system out is absolutely crucial to getting ahead in the game, and it not only helps make combat flow better, but makes it less tedious than turn-based combat can sometimes feel. It forces you to think about your fleet composition, both in terms of the ships and the abilities of the captains piloting them, and a well-designed team can easily go toe-to-toe with enemies far beyond their scope.

Unfortunately this also means that the game doesn’t often feel challenging enough, and there are times where a single fleet group will simply walk over everything else on the map. The sense of progression overall is fairly lacking, and there doesn’t seem to be nearly enough feedback as to what to do next. There’s a quest log, but that’s mostly just reports from your bases telling you to come grab this week’s groceries. There can be a frustrating amount of downtime between engagements, and unlike X-Com, there’s not nearly enough managerial work to tide you over between fights. Even when you do have something to do its mostly busywork, which is fine for leveling up fresh new recruit captains, but after your forces are mostly veterans, it all falls somewhat flat.

Graphically the game looks pretty good. The interface is clean and easy to navigate, which is important for a game like this. The combat interface is great, and it’s easy to see what effect your attacks will have and what damage they’ll do too. The various ships and factions all look unique and interesting and there’s a good deal of variety in everything. If there’s one complaint, it’s that the main map can’t be zoomed out enough, which makes moving it around a hassle in the late game. There was also a minor gripe about the captain leveling interface, but that’s been patched out prior to this review, so nice job.

On the audio front the game is somewhat bare-bones. There’s music, which is great, but there isn’t a lot of it. It’s mostly just standard sci-fi chiptunes, but they’re catchy enough that you don’t get annoyed the fourth or fifth time they loop. Other than that, there’s sound effects on weapons, which range from the bassy blast of a flak cannon to the time-distortion effects of a stasis field. It’s all fairly decent and inoffensive.

Taken as just a weird mix of ideas from otherwise better games, Halycon 6 is a pretty good package. There’s plenty of depth thanks to its combat system, and randomised maps give a bit of replay value after beating the campaign. Its unfortunate that it never quite rises to the level of its individual parts, but as a complete package there’s more then enough to satisfy anyone looking for just a bit more sci-fi action this year.