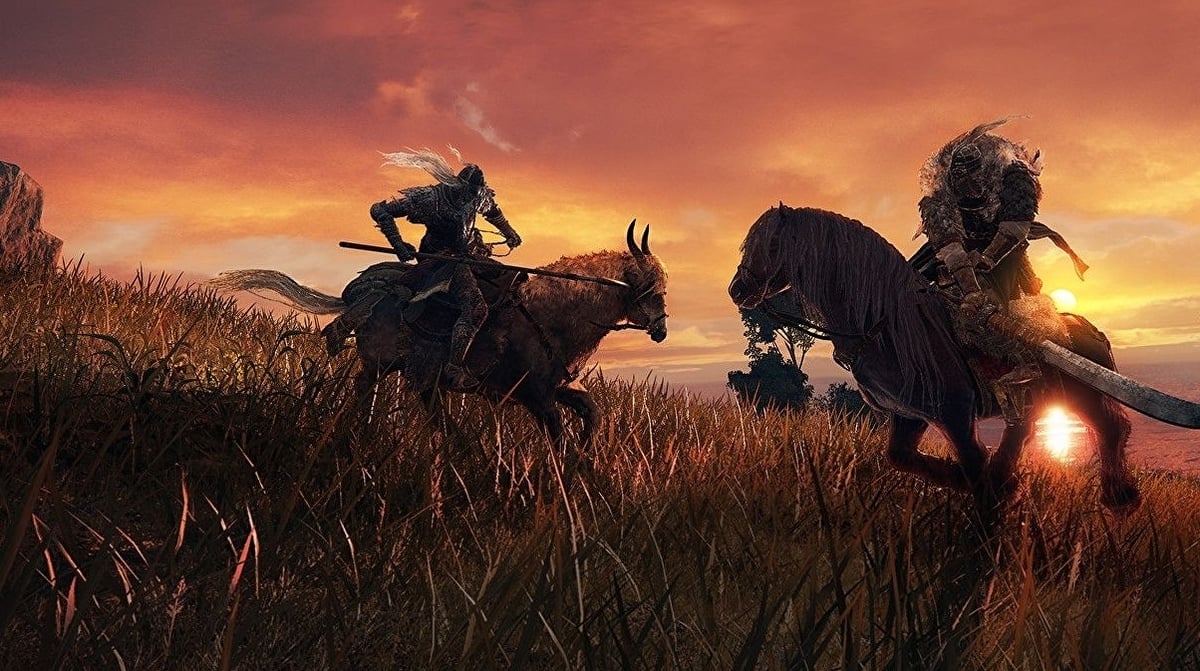 One of the big differences between Elden Ring and From Software’s previous games, is its open-world nature…

The debate as to whether or not video games deserve to be recognized as an artistic medium seems to have waned over the last decade or so; with titles like Death Stranding, The Return of the Obra Dinn, and Disco Elysium populating our Steam libraries (just to name a very biased few), the artistic merits of video games have come to be widely accepted as legitimate. While this is all well and good, it’s worth looking into exactly what makes video games stand apart from other artistic mediums like films or novels.

First off, before your eyes roll completely out of your head, let’s state the obvious up front: interactivity. Of course, simply being interactive isn’t what defines a game’s artistic value; a book merely having words written on a page is not what makes it a work of art, it’s which words are written and how they are assembled that has an effect on an audience. How games utilize the unique interactivity of their medium is what sets them apart, and games like FromSoftware’s wildly ambitious Elden Ring stand as a shining testament to the extraordinary impact that video games can have.

“It is the unknown that defines our existence. We are constantly searching, not just for answers to our questions, but for new questions. We are explorers.” – Benjamin Sisko

There were admittedly some early misgivings when FromSoftware announced that Elden Ring would feature a fully open world. For a genre that proved to be such a definitive turning point in gaming, recent years have shown a troubling trend of open world games gravitating further and further towards a common template. Litter your world map with a list of collectibles, claim small chunks of the map at a time from an opposing faction (usually accomplished through “liberating strongholds”), and have your next quest objective labeled with a massive arrow and a dotted line. Side content tends to pile up in a manner similar to a chore list, and bonus points seem to be awarded if your game can incorporate some form of Geralt’s “witcher sense.” There will most likely be a very simple crafting system, and a great deal of time will be spent crouching in bushes.

This homogenization of open world games doesn’t necessarily result in “bad” games, per se, but it does leave a feeling that they’re all coloring in the same template. It would be overly cynical to say that this kind of game design reaps no genuine success; games the likes of Horizon: Forbidden West, the aforementioned Death Stranding, and Ghost of Tsushima have shown that extraordinary things are possible when these genre tropes are handled creatively. If you’re looking back at that particular line-up, you might be noticing that this article seems to have been written by a Sony shill. You might also be noticing that part of what makes these games stand out is what genre conventions they don’t adhere to.

Ghost of Tsushima, for instance, shucks the traditional “arrow and a dotted line” approach of guiding us to waypoints, opting instead for letting us follow the blow of the wind as it guides us to our selected destination. While the change might seem minor, the degree to which this increases our engagement with the world can’t be understated. Horizon: Forbidden West sticks to the guns of its predecessor and gives us a dynamic and truly cinematic combat system akin to a cross between Monster Hunter with the slightest dash of Shadow of the Colossus that continues to set it apart from its open-world contemporaries.

And Death Stranding is, well… Kojima.

Now, before you start wondering about the sanity of our editors, this is an Elden Ring article. We do have one more slight detour, but it’s a significant one that drives at the heart of what makes FromSoftware’s newest release their arguable magnum opus. Subverting traditional mechanics goes a long way in making these open world games stand out amongst the crowd, but what makes a game a generational achievement (as far as open-world games go) is something a bit more intangible: How it sparks our curiosity and compels our imagination.

Yes, Elden Ring has its fair share of those template mechanics from earlier. Players have a pretty straightforward crafting system. Players crouch in bushes. The combat is a more polished Dark Souls 3 system, and a good deal of assets and enemy movesets have been recycled from previous FromSoftware titles. Some smaller side dungeons feel a bit like filler content and multiple bosses are reused a few too many times (and in some questionably small arenas relative to their size), and the multiplayer is still an unwieldy fiasco of brutal latency issues.

The thing is, all of Elden Ring’s issues pale in comparison to what the game does so well. Of all the open-world games we’ve been discussing so far, a notable titan of the genre is suspiciously absent, and it’s the one that Elden Ring probably shares the most DNA with: The Legend of Zelda: Breath of the Wild. Both games have their issues and nitpicks, but their flaws are outshone by their sheer audacity in world design. They understand the fundamental aspects of what makes exploration such a viscerally enjoyable and memorable experience.

Both games set you loose with a vague end goal in mind, and leave you to your own devices as to how to achieve it. They don’t give you quest markers; your only way forward is to explore what you see. By utilizing immaculately clever world design and hiding actual useful and game-changing items in every nook and cranny of their densely packed maps, we are compelled to discover the world not because we feel the need to fill out a checklist, but because we’ve been instilled with an insatiable curiosity to see what’s around the next corner.

And this is something FromSoftware has always excelled at, even in their more constrained Metroidvania titles like Dark Souls and Bloodborne. Exploration has always been a cornerstone of their design philosophy, and Elden Ring’s open world format has amplified that aspect to an almost unfathomable degree. Not only is the world itself so intricately put together, but the self-contained castles, keeps, and dungeons operate almost as small-scale Metroidvania throwbacks to their Souls roots; Stormveil Castle would feel right at home as a branching area of Dark Souls 3 any day of the week. Where most developers will sacrifice a certain amount of depth or complexity in the expansion to an open world format, FromSoftware has somehow managed to maintain both, and the effort needed for such an achievement had to be nothing short of Herculean.

This swings back to what we were saying about how games utilize their interactivity. The thrill of exploration and discovery is something that games can achieve at a level no other medium can. Sure, we can read a good adventure book and be curious about what’s on the next page, but games like Elden Ring put us in the driver’s seat of our own adventure. Games aren’t bound by the same shackles as movies or novels; we don’t have to project ourselves onto Frodo, we are Frodo. We are the explorers in our own expedition, and all of our stories are different from those of our friends. Granted, not all games elicit this response, but the truly exceptional few exemplify why games are a truly unique art form.

This is why Elden Ring appeals to players on an instinctual level. It transcends the tropes of its genre to give us a game that sends our imaginations running. It’s one of those games where you realize you don’t know what time it is anymore after a few hours. An eight-hour play session feels like two, and the controller is impossible to put down. When older gamers reminisce on how games used to make them feel, Elden Ring is how we felt. It’s a bonafide triumph in world design and an obvious labor of immense love from an exceedingly talented team of developers at FromSoftware.

Hidetaka Miyazaki and his team at FromSoftware put their unmistakable stamp on Metroidvanias with their 3D reimagining of the genre, and in doing so, created a genre of their own. Souls-like games are crowded shoulder-to-shoulder on every digital marketplace with varying degrees of quality, all with creative names for their checkpoints that we will all regardlessly call “bonfires.” With Elden Ring, they’ve left their mark on a new genre, and its ripples will be felt in game design for years.

Will we see Elden Ring impersonators akin to the flood of Dark Souls-inspired titles? Maybe, but the thing about games like Elden Ring is that they are tenaciously hard to make (as is Dark Souls; just ask Lords of the Fallen or The Surge). You can imitate specific elements and try to capture the finer details of the combat or the general progression, but building this kind of world that feels at once dauntingly massive and intricately dense is something that requires a deft touch that’s not easy to come by.

Now, if you’ll excuse me, I have more “illusory wall ahead” messages to downvote. Oh, and whoever had the idea to put “try fingers” in the template of the message system knew exactly what they were doing. You’re not just complicit, FromSoftware; you’re instigating.