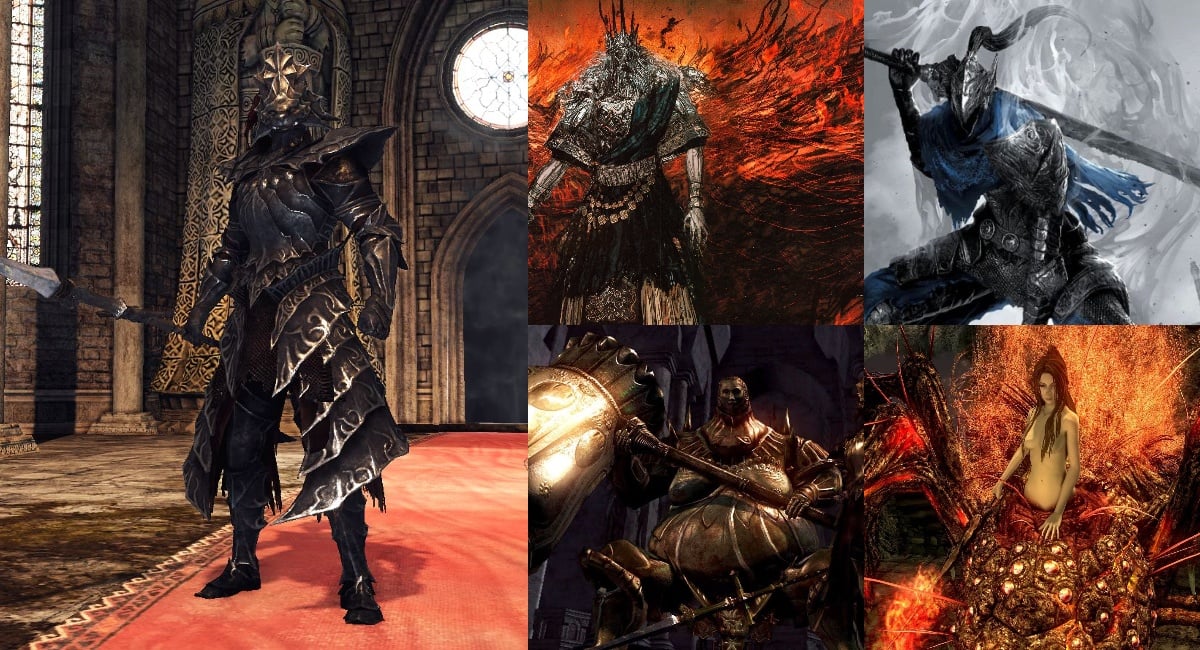 The Dark Souls series is known for its difficulty; part of that difficulty, of course, is the bosses. Whether it be a towering suit of armor wielding a giant sword, or a massive dragon, bosses in this series are no less than awesome. Here are some of our favorites:

“Velstadt was always at the King’s side, as if he were his Lord’s own shadow. After the King retired to the Undead Crypt, Velstadt followed, never to return.”

One of the more epic boss fights in Dark Souls II, Velstadt has a wide range of attacks and he just looks awesome. Decent music sets the mood for this pretty cool boss fight, and what lies after him kind of makes the fight that much more worth the wait.

9) The Last Giant and Giant Lord

“Apparently, the trees in the Forest of Fallen Giants are the remains of the Giants from long ago. Is this really the last of them?”

In case you didn’t notice, these are the same enemy, which would explain why when you first encounter The Last Giant he hates you so much. In the Memory of Jeigh, you go back in time and seemingly kill the Giant Lord, and when you encounter him in the present you put an end to his misery. This isn’t a great boss fight, but the story behind it is pretty damn cool.

“The guardians of the first Bell of Awakening.”

Before you ring the first Bell of Awakening, you emerge through the fog onto the rooftop of a church, only to be greeted by a gargoyle animating and flying down to stop you from ringing the bell. As you chip its health down, another gargoyle jumps down to join the fight. After finally beating the two beasts, you ascend a few ladders and take the first true step toward an amazing journey.

“Soul of what lurks in the Dark Chasm. The Dark Chasm of Old is the remnant of some ancient, dissipated being.”

As far as I know, this is the only boss in the Souls series that is locked behind a questline and a pretty difficult quest line at that. It is also the only boss in a Souls game that I haven’t beat, so I guess I have to respect that. Getting to the Darklurker is fun, but difficult, and is said to be one of the hardest bosses in Dark Souls II.

“The Old Dragonslayer is reminiscent of a certain knight that appears in old legends.”

Corrupted by the Abyss, Old Dragonslayer, compared to his Dark Souls counterpart, now has darker powers; though they both have similar move sets. The nostalgia of this boss fight is really what makes it memorable. Opening the doors to a towering cathedral only to be greeted by one you’ve almost surely bested in the past. Just awesome.

Once a daughter of the Witch of Izalith, but now a chaos demon. Special beings have special souls, and Quelaag’s soul contains all aspects of Chaos.

Arguably the “hottest” boss in the series, Quelaag was the first time I ever struggled in Dark Souls. I probably attempted to beat her for 10 hours, and when I finally snuffed her out, the entire game clicked and I finally got Dark Souls, I understood why it was so appealing.

4) Knight Artorias, of the Abyss

“Soul of Lord Gwyn’s Knight Artorias, who was consumed by the Abyss. The legend that Artorias repelled the Abyss only told half the story. It seems that he was defeated, and his honor preserved, by some unsung hero, who is the true victor of the Abyss.”

Really my favorite character of all the Souls games next to Siegmeyer, Artorias is just a complete badass, one of The Four Knights of Gwyn, and simply awesome. Said to be the first person to walk the abyss, Artorias’s story is tragic. He lost his life and his wolf, Sif, as he was consumed by the darkness of the Abyss. Oh, and to make the fight even better, you become the true victor of the Abyss.

“Soul of Sif the Great Grey Wolf, who guards the grave of Artorias the Abysswalker.”

If you met Sif in the DLC prior to fighting her, the magnitude of this boss is only heightened. Artorias’s companion in life, and guard in death, all Sif wants to do is protector her former master. Wielding Artorias’s giant sword, she plans on keeping the grave safe, but in the end, she submits to you. She starts limping around and it is sad as hell, honestly.

“Soul of Ornstein, Dragonslayer Knight who guards the cathedral in the forsaken city of Anor Londo.”

“Soul of Smough the Executioner, who guards the cathedral in the forsaken city of Anor Londo.”

This boss fight, from a mechanical and difficulty perspective, is the best in the series. Two completely different fighting styles and two different ways to combat them. From a story perspective, it is pretty good, too. Ornstein, captain of The Four Knights of Gwyn fights with grace, and when Smough is felled, he absorbs his power fluidly. Smough, the executioner, a ruthless fighter (and person, really, he liked executing people so much he started eating them) just wants to destroy you, and when Ornstein is defeated, he just smashes the body to absorb his power. The music to go along with this fight is pretty damn good, too.

“Soul of Gwyn, the Lord of Sunlight and Cinder, who linked the First Flame. Lord Gwyn bequeathed most of his power to the Gods, and burned as cinder for the First Flame, but even so, Lord Gwyn’s soul is a powerful thing indeed.”

This fight is really cool, and as you can see my favorite fight. He’s not a particularly hard boss if you can parry, but just everything about the battle is awesome. The music, the setting, and the actual character are great. All of your hours of play have led to this boss, and he is just ruthless. You defeat a literal god and choose to link the flame or let the fire fade.