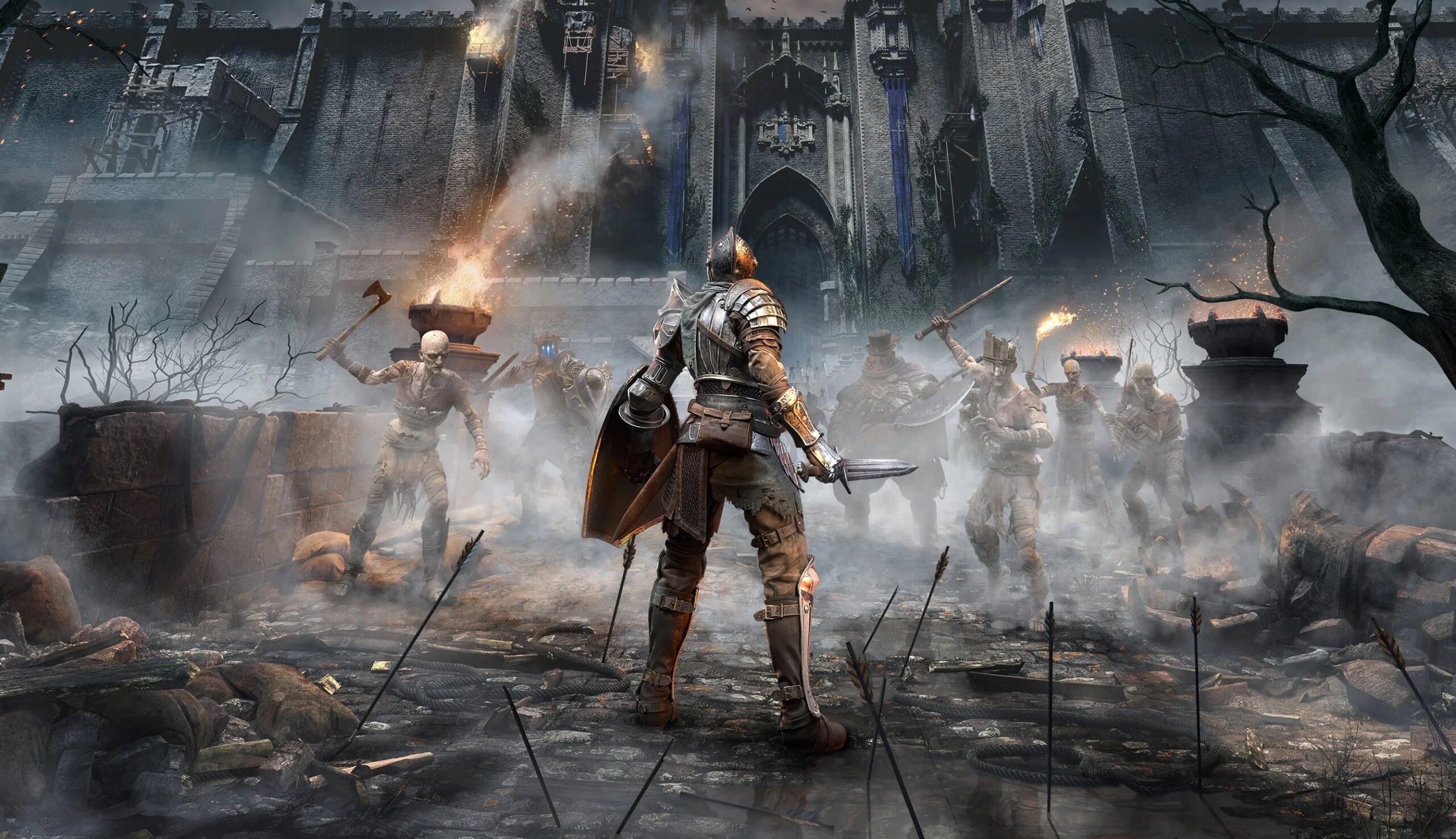 “Very well, I can no longer resist you. Take your precious Demon’s Soul…”

Circa 1999, a rather candid behind-the-scenes segment for Star Wars: The Phantom Menace would attempt to shed light on the strangely enigmatic George Lucas and his unique creative process, especially in regard to his storytelling. One particular excerpt sees Lucas breaking down the structure of The Phantom Menace in relation to his original trilogy of films, and how they should relate to each other.

Lucas cites two scenes: one from The Phantom Menace, one from A New Hope. In The Phantom Menace, we have a scene of a young Anakin Skywalker destroying a Separatist control center. At almost the exact same point in their narratives, A New Hope sees Luke destroying the Death Star. Two incredibly similar sequences placed structurally at the same point in the overarching narrative. When justifying this decision, Lucas explained, “It’s duplicating the Luke Skywalker role, but you see the echo of where it all is going to go. It’s like poetry; they rhyme. Every stanza kind of rhymes with the last one.”

Whether or not this approach was successful for Lucas and his prequels is… up for debate. The quality of his second trilogy is ultimately beside the point in this instance; the more interesting idea he raises is this concept of two pieces of related works, tethered by a shared creator, having recurring themes or design decisions that seem to echo each other. If a case-study could be undertaken to see how this concept translates to game design, few companies would be better suited than the often-lauded FromSoftware.

In an industry rife with volatility and uncertainty, few companies have seen the kind of sustained success that has accompanied FromSoftware over their rather lengthy tenure. Granted, they haven’t been the can’t-miss titan they are today for their entire run, but their splash in 2011 with the genre-defining Dark Souls would kick off a decade-long stretch of commercial and critical acclaim that has yet to show signs of stopping.

And while Dark Souls stands tall as the catalyst for FromSoftware’s ongoing success, it was two years prior, in an ever-distant 2009, that a PlayStation 3 exclusive title would prove the ambitious testing ground for many of the tropes that would become undeniably emblematic of the “Soulsborne” series. Helmed by a young Hidetaka Miyazaki in his freshman effort, the brave and esoteric Demon’s Souls was about to shift the timeline of gaming for the foreseeable future.

Well, it at least set the foundation for the game that would.

That’s not to say Demon’s Souls was a complete flop; it garnered a ravenous niche audience upon release, but its widespread appeal was lacking as a PS3 exclusive title. It could be argued that, had Demon’s Souls released to the kind of wider market that Dark Souls reaped, perhaps Demon’s Souls would be the favored son. Perhaps Latria and Boletaria would be our nostalgic FromSoftware touchstones as opposed to Lordran and Anor Londo. Ultimately, it’s hard to say. While they are certainly cut from the same cloth, the two games are wildly different in terms of design philosophy.

But alas, we are where we are. Demon’s Souls walked so that Dark Souls could run in its wake, and history tells the rest. While Demon’s Souls has wallowed away for some time now locked behind the PlayStation 3, BluePoint’s recent remaster has not only given the game a current-gen facelift and engine update, but it has finally found its way onto a far more commercially accessible platform: the PlayStation 5.

Well, with both iterations of Demon’s Souls being relegated to Sony’s most elusive consoles, FromSoftware’s youngest Souls foray remains as frustrating as ever for the uninitiated to get their hands on. But, against all odds, one fortunate soul managed to wrangle Sony’s newest powerhouse; and they just so happen to be an adoring FromSoftware fan. With the entirety of the Soulsbourne catalog for reference, a fresh dive into Demon’s Souls proved a fascinating look back at the ideas and concepts that would permeate the franchise at almost every turn.

Playing through Demon’s Souls for the first time in 2022 is something akin to walking through a museum; an interactive history lesson on FromSoftware’s approach to game design. While echoes of Demon’s Souls are littered all over the Soulsborne series, we’ll be looking at a select few that stand out as specific inspirations for later titles. On that same note, this isn’t something as broad as the general mechanics that have carried over, e.g. “killing enemies gets you souls.”

For starters, one of the things that makes Demon’s Souls so fascinating is that almost every boss in the game is a “gimmick boss.” Bosses play out more as puzzles than tests of skill, and rely more on problem-solving than they do your perfectly timed dodge rolls. With so many experimental bosses, Demon’s Souls boasts a few unique boss designs that FromSoftware would end up coming back to in various forms.

Tower Knight, for instance, has a few mechanics that turn up in both Dark Souls and Bloodborne. If you want to defeat Tower Knight, his Achilles’ Heel is, quite literally, his heel. Hack at the back of his feet long enough, and he’ll eventually stumble over, providing an opening for his exceptionally weak head. Fast forward to 2011, and take a long look at the Iron Golem atop Sen’s Fortress. Sure, he might be missing a shield, but you’re basically looking at Tower Knight 2.0. His moveset is slightly varied, but the approach remains the same. Hack away at those heels, and you’ll topple Iron Golem before long. Pay close attention and you’ll even pick up on similar AI behavior in relation to how both bosses respond to player location.

But the gimmicks for Tower Knight don’t stop at his flimsy boots. He’s flanked on both sides by archers that will rain down on your encounter unless they are dispatched beforehand. A quick climb up the battlements is all that’s typically required to clean them out, and the fight becomes substantially easier. Miyazaki clearly had a soft spot for this particular design, as it would crop back up in your clash with One Reborn in Bloodborne. Not only do fire-flinging mages line the battlements on either side of the arena, but the arena itself is eerily similar in design to that of Tower Knight, both aesthetically and in terms of level layout. And, as you might expect, a swift thwacking of the casters along the battlements makes for a much easier tussle with One Reborn, just like their 2009 counterpart.

The fights are far from carbon copies of each other, but specific, undeniable elements from Tower Knight found their way into Demon’s Souls’ successors. Miyazaki loves this sort of connective tissue between his projects; a slight callback to his previous titles, be it through game design or actual recurring elements like Patches or the Moonlight Greatsword. They all echo each other.

And Tower Knight isn’t alone; we see all kinds of seeds in Demon’s Souls that would someday sprout in future Soulsborne titles. The infamous Dragon God “fight” that amounts to “press two buttons on opposite sides of the arena to win” would come to fruition in FromSoftware’s worst boss fight to date with Dark Souls’ Bed of Chaos. The Maneater duo would lay the foundation for the Belfry Gargoyles. The clone-fight of the Fools Idol would surface much later in Dark Souls 3’s Crystal Sage, and even Gwyn’s signature “the last boss is a weak opponent, and that’s the point” shtick was established years prior with King Allant.

Even Demon’s Souls’ most cryptic – and divisive – mechanic managed to echo into Sekiro: Shadows Die Twice, of all places. It’s difficult to discuss Demon’s Souls without addressing the mechanic of World Tendency, the game’s strange “death spectrum” that alters the world as you continue to die (or not die). Continued deaths in human form will result in black world tendency, while clearing bosses and killing red phantoms will help push you towards white world tendency. These different world tendencies bring with them unique NPCs and enemies that appear only within said tendencies. It’s an unusual design decision that continues to garner mixed reactions, and for the longest time, it seemed as if FromSoftware was perfectly happy letting it be a relic of their earliest ambitions.

That is, until Sekiro: Shadows Die Twice adopted its own World-Tendency-lite mechanic in the form of Dragonrot. In Sekiro, continued deaths begin to have a ripple effect on the NPCs throughout the world. As you die, NPCs may succumb to Dragonrot, a disease that spreads with every death you suffer. You receive items that signify which NPCs have passed on. Additionally, you also have access to avenues by which to reverse its effects. It’s not quite as in-depth or impactful as World Tendency, but its principle design is intrinsically linked all the way back to Demon’s Souls at its most experimental.

Look, we could go on all day about how Dark Souls 3’s Irithyll Dungeon couldn’t be a more obvious spiritual successor to Latria, or how the entirety of the Valley of Defilement would set the precedent for not only Blighttown, but for every poison swamp Miyazaki has ever masochistically dreamed up. The takeaway is that, while it may not have been FromSoftware’s breakout hit, Demon’s Souls established a foundation that Miyazaki felt was worth preserving. This isn’t an accusation of recycled ideas, it’s an acknowledgment of the legacy that Demon’s Souls helped create. Its aftershocks can be felt through the entirety of Miyazaki’s body of work, and he takes obvious joy in calling back to his roots.

We see recurring Souls tropes and trends not as a result of lazy design, but of a loving admiration for what came before. The spirit of each game ripples into the next, and Demon’s Souls was the trailblazing catalyst. These recurring themes and tropes help serve as the tether that strings the Souslborne series together, giving us a decade-spanning saga of games that feel inherently connected. It’s like poetry.