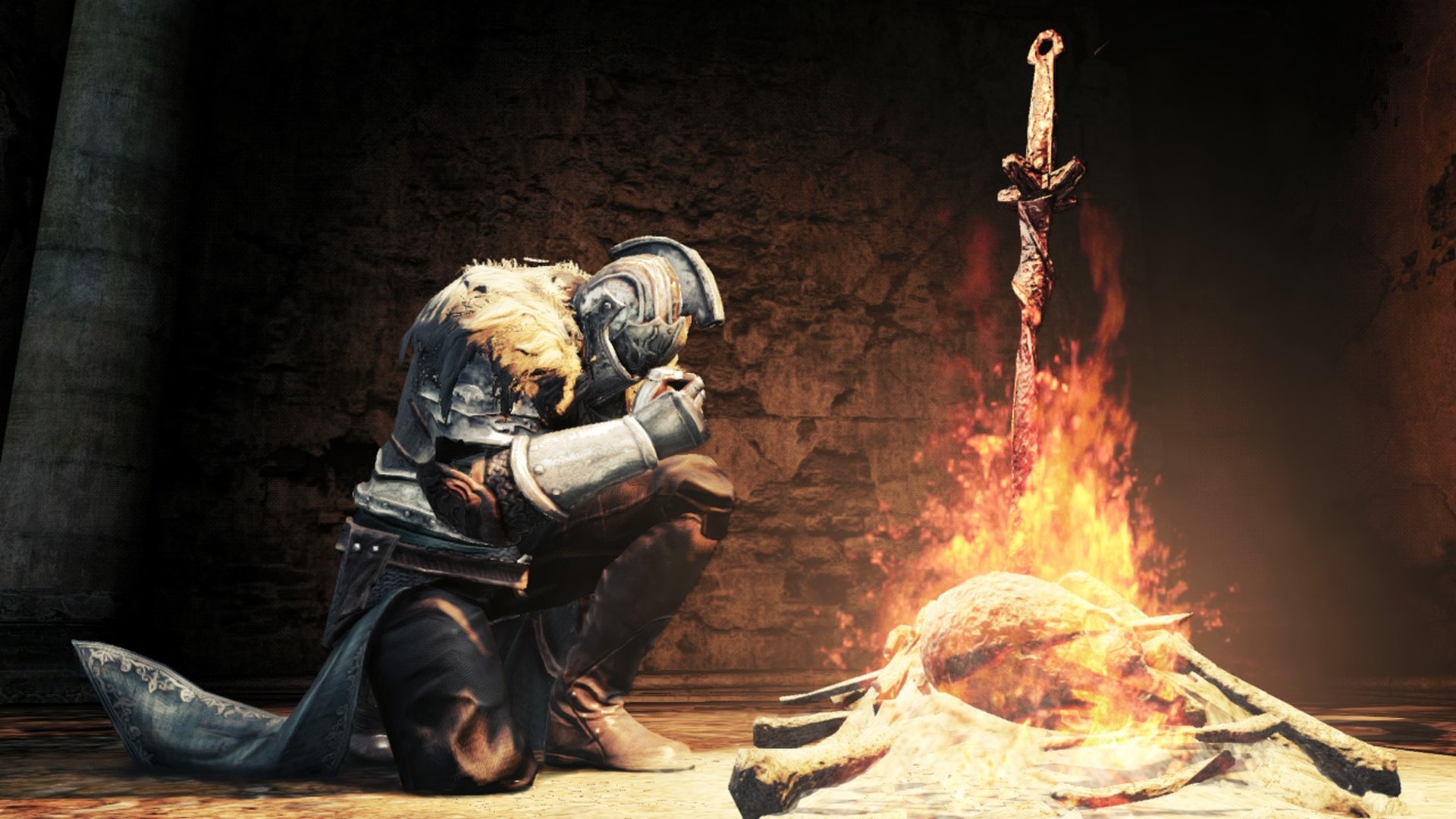 Dark Souls: The Art of Storytelling

Ever since the series began with Demon’s Souls back in 2009, the Souls franchise has had a knack for a certain method of obscure storytelling. Each time you enter one of From Software’s many worlds, you are dropped into a narrative in media res, where a lot has happened long before you arrived, and a rich history exists which defines your current circumstances and reverberates in the worlds of Dark Souls.

Sure, you are given some vague information and an initial goal (slay the archdemons, ring the bells, find a cure) but the actual state of the world and how it got that way is always obscured behind layer after layer of mystery, deceit, misinformation, and obfuscation. These mystifying themes carry through all four of the main games in the extended Souls universe, up to and including Bloodborne, but there is no greater example than the plot of the core game of the series, Dark Souls.

Dark Souls begins with a prologue that explains how mankind and creation dawned in this world when sentient beings first rose from the flames and found the souls of lords. It lets you know that the denizens took the world over from giant beasts, much in the same way that we did in our own reality, though these early precursors did so by more violent means–slaying the dragons at the top of the food chain with the genocidal ambition of those who are so new to power. 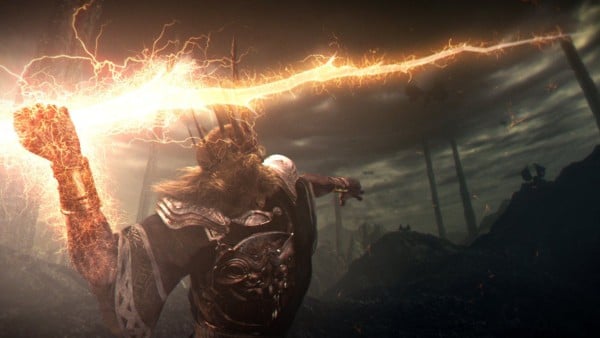 At the core of the story is the fallen king Gwyn who sacrificed himself to save the kingdom, but went mad as a result.

However, there is no power without consequence, and so it was the with the souls of the Lords. Each possessor eventually became corrupted and in time, so did the lands they ruled over. The supreme ruler Gwyn, the Gravelord Nito, the Witches of Izalith, Seath the Scaleless, and the Four Kings all fell prey to the growing darkness inside of them, and as their hearts blackened and their souls charred, they crawled into the bowels of the earth, far away from the rays of the sun.

This is where your character enters the narrative. As one of the cursed undead, a fate that will eventually befall all who have survived the calamity up until now, you are one of the last denizens of a world which is slowly dying. As the chosen undead it is up to you to rescue the land of Lordran from the darkness that is slowly consuming it…or at least that’s what the official story is as you are guided along your way by one character after another, but it doesn’t take much pondering to see that all is not as it seems.

The first two characters that guide and advise you are Oscar of Astora, a suicidal knight teetering on the edge of sanity, and the Crestfallen Knight, a cynical loafer who spends his time giggling madly to himself at a bonfire. Both tell you to ring the bells and seek the path to salvation, but neither one is really in a position to give advice. Still, with no other direction or path, you follow their guidance until it leads you to the fabled city of Anor Londo. 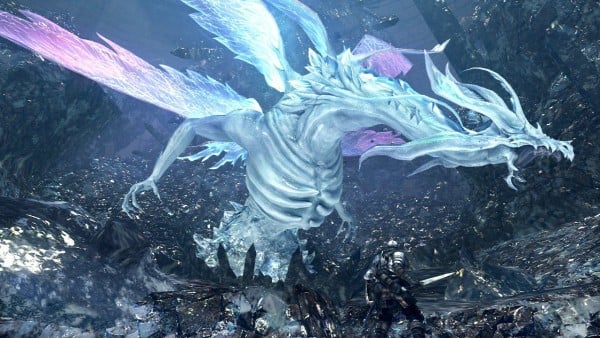 Seath the Scaleless is yet another of the cursed beings struggling to maintain his tenuous grasp on power and avoid paying for his past sins.

Anor Londo is a bright and beautiful place that seems untouched by the curse of the undead, and after a few scuffles with the last remnants of the king’s guard, you find yourself standing at the sizable bust of a giant princess, Gwynevere, who urges you to succeed her father and save the world from the curse. However, a bit of digging shows that the king had two children, the second of which, the sorcerer Gwyndolin, is hiding in his father’s supposed tomb. Making matters even more suspicious, if you have the gall to shoot the gorgeous, glowing princess with even a single arrow she dissolves immediately into the mist of illusion.

Here’s where the first hole appears in the official story. Do a bit more research in the world, through item descriptions and lore details, and you’ll come to find that Gwynevere left the kingdom long ago with an errant knight and never returned. So who is this transparent woman advising you to murder her father? Well, it turns out that she is merely a mirage crafted by the sorcerer Gwyndolin, a phony harbinger he created to convince the chosen undead to slay his father and take his place in the bowels of the earth where the ashen King Gwyn currently resides.

In the so-called “good ending”, after you overcome the mad king and the other lords, you do just that. You make the choice to slay the fallen king, and then valiantly step into the primordial fire, burning yourself to a cinder as the king himself did before you, It’s a weighty and awe-inspiring finish, but few first-timers will realize that it is actually just a way to extend the life of this world, and keep the status quo alive, rather than allowing it to succumb to the curse. 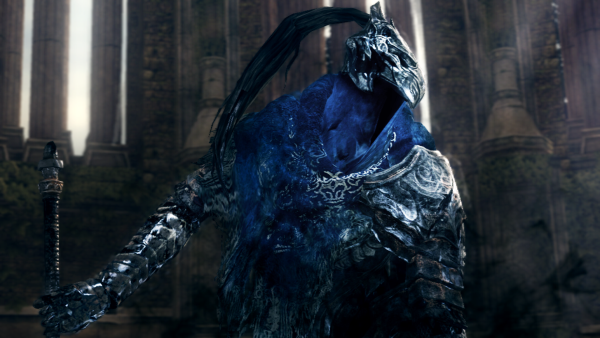 Artorias the Abysswalker and his companion Sif exist as reminders of what happens when you try to “do the right thing” in Dark Souls.

In fact, the true good ending is actually the “bad ending” in which you walk away from the fire like a coward and embrace the trust of the dark serpents of the underground. If you find their leader, Darkstalker Kaathe, hiding in the darkest abysses of Lordran’s flooded and abandoned capital, he will tell you what is really going on, how Gwyndolin and the primordial serpent Kingseeker Frampt are carefully manipulating people into fulfilling a prophecy that they themselves set into motion, and despite his seemingly sinister nature and the terrible place where you discover him, he is indeed telling the truth. Just like in our own world, there are a lot of people who know about the secret tragedies occurring behind the scenes, and many of them are happy to lie through their teeth so long as it maintains a happy status quo that keeps the gears turning in their favor.

In this fashion, Dark Souls crafts a sneaky and deceitful core story by using the standard conventions of RPGs and the fantasy genre to trick you into believing what you want to believe. I mean, who would you rather follow? A beautiful princess and a wizened sage telling you that you’re the savior of the world or a snide and cynical wretch telling you that everything you believe is a lie and that the only way to truly save the world is to abandon it to the void? 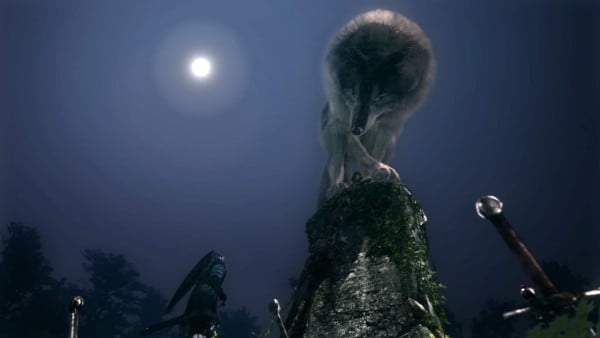 The only task left to a noble creature like Sif is to guard the grave of his centuries-dead friend, Artorias. It’s sad a fate for this former hero.

The world of Dark Souls is filled with stories like these, and if you’re not the type to obsessively read through item descriptions or carefully examine the words of the NPCs of Lordran than these truths could easily drift right past you. From the cannibalistic rites of kings guard member Executioner Smough, to the Dark Moon-Sorcerer, Gwyndolin, being secretly raised as a girl for most of his life, to the cursed fates of every great and honorable warrior of the kingdoms past, a series of unfortunate events that prove the conspiracy, and remind players relentlessly of that old idiom about no good deed going unpunished.

Like the Silent Hill series, the Souls franchise is happy to let players believe whatever they want to believe about the world or worlds that they’re inhabiting, but the more careful and curious you are about the little pieces of the narrative that you discover, the closer to the truth you will eventually come. The fact that you have to go looking for these truths make them all the more satisfying when you finally stumble upon them.