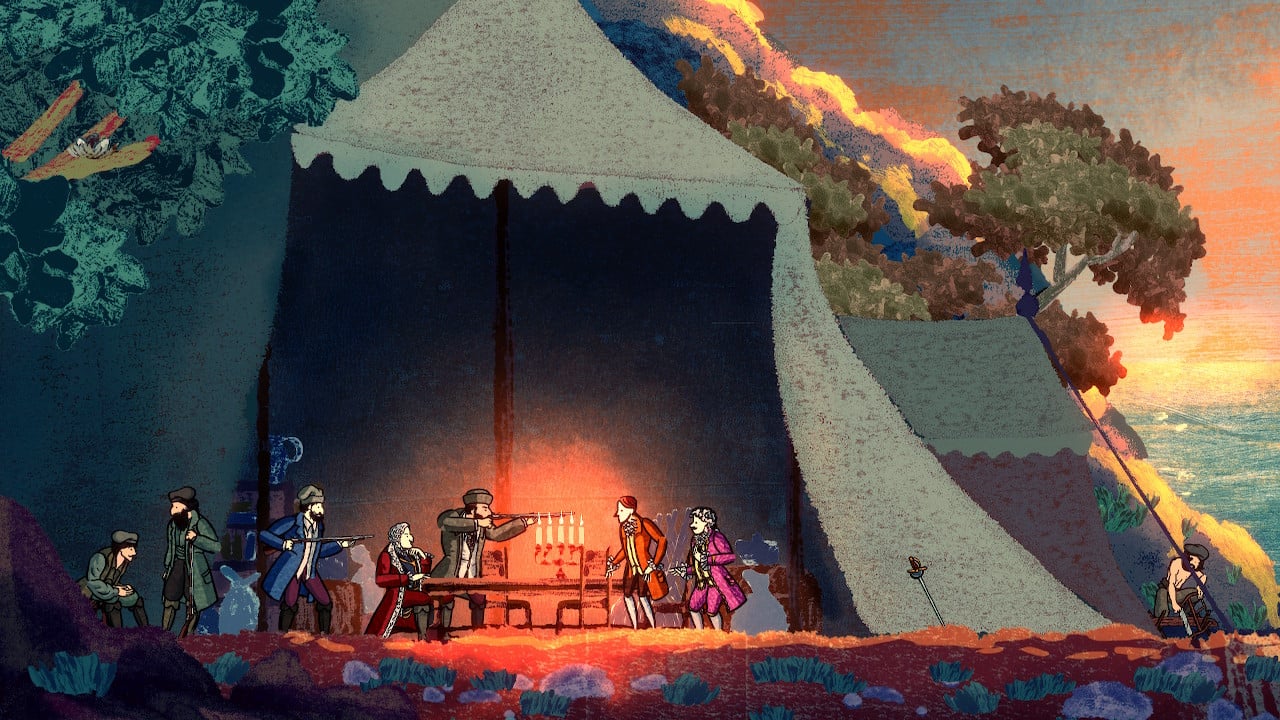 Don’t let it fool you, Card Shark is not a card game. More importantly (and don’t be shocked), there are no sharks in this game at all!

Card Shark is a game largely about cheating at cards, but more than that, Card Shark is a story-driven adventure that takes place around a variety of 18th Century card parlors. As you play games and (hopefully) win by fooling opponents (you shark!), you try to both move up the social ladder, pour a lot of wine, and unravel some twisty mysteries while you’re at it. While most of your time is spent around a card table, instead of choosing the best hand, you are left to master widely varied mini-games that mimic a banquet of sleights in order to fool your foes and move forward. You accumulate more cheats and information as you go.

Published by the always-interesting Devolver Digital, designed by the genre-bending Nerial (Reigns), with art by the excellent Nicolai Troshinsky, and music by Andrea Boccadoro, Card Shark is beautiful, unique, and not for everyone. But if it is for you, get ready to don your best aristocrat wig and bilk some nobles for both fun and profit. Card Shark is not perfect, but it is well worth sitting in for a hand if you crave this particular combination of novel mechanics set against a gorgeous presentation.

A Feast For The Gambler’s Eyes

There is a lot to catch your aspiring swindler’s eye in Card Shark, not the least of which is its exceptional visual style. Troshinsky has crafted a world that evokes 18th Century nobility, romance, and guile while looking utterly its own. The backgrounds feel like broad-brushed impressionistic studies, and the characters are a gorgeously animated woodcut set on top. Each scene and individual has been carefully rendered and feels distinct. And these bawdy miscreants and nobles don’t just look good, Card Shark is rich with a cast who are easy to invest in, featuring a surprisingly tense political story that has some heft. It’s all set alongside a gorgeous baroque musical score that perfectly sets the tone throughout. In the end you can’t help but feel like you are a part of the piece.

Tricks of the Trade

Gameplay, too, is distinctive, and when it works, it is both satisfying and addictive. In general, the loop of the game involves you, a mute protagonist, learning at least one new technique for cheating at the heel of your rascal of a mentor. You take said techniques to a card table, and as you win, you gain more information, moving the story forward and unlocking new maps, techniques, and tables to play at.

When it all works, it really does make you feel quite clever. The techniques for cheating are widely varied, with over two dozen to unlock. Each feels like its own mini-game, and they are always carefully paired to a genuine card-cheating technique or parlor game such that you feel oddly accomplished when you nail them or chain them together.

Card cheating mini-games (and other parlor game mechanics) vary largely between clever spins on memorization and careful bits of timing to moments that almost feel like quick-time events. What’s wonderful about Card Shark is that more often than not, the controller mechanics really do meet the task-at-hand in countless new ways. Often you’ll have to pour some wine as a distraction and then be left to either fix a deck, force a shuffle, or otherwise manipulate the cards at hand, always with a novel twist. You nearly always have a chance to practice each technique as much as you’d like before taking it to the table, which is both welcome and recommended.

Once in a hand, your techniques are then set against a timer that is meant to mirror the level of suspicion of your opponent. If you make them too wary, you are either cast out, arrested, or killed. When everything is firing off well, this makes for fun moments of tension and release and creates real stakes. You can and will end up facing Death herself in order to get back in the game, a fun and charming twist and one of the best characters in a game populated by many standouts.

If this sounds like your particular type of game, most of the time the card cheating techniques are both entertaining to learn and fun to string together. But sometimes they are not. There is a delicate balance at play here, and the gameplay falls off at times because not all of the card cheating mini-games are created equally. It’s almost as if the developers recognized this, as sometimes when you are learning, your mentor will take the time to point out a particular trick as “fiddly.”

Unfortunately “fiddly” is 18th Century swindler-speak for “does not work consistently.” Pro-tip, if you get stuck, you can ratchet the difficulty down to ‘dilettante’ at any time and you’ll be prompted to skip a sequence. While perhaps this reviewer simply needed more patience and mastery, unfortunately it felt occasionally necessary in order to move things forward. In our playthrough, we found particular problems with inputs around some of the trick shuffles, but maybe we’re just clumsy with the cards.

Another space that could use minor improvement is in its internal systems for tracking various techniques. Card Shark throws a lot at you to remember, particularly since you’ll often be using very specific button-presses to signal card numbers and suits. Like a deep fighting game, this could some day be mastered, but it’s a lot to ask on the fly. When you are in any trick section, you can access a kind of moment-sensitive cheat sheet, but it has a frustrating two-step process that forces you to learn techniques and then get associated button values while you’re in the moment.

On top of that, the time-sensitive menus don’t always catch up perfectly with the gameplay, which is problematic against a clock. Lastly, there are times where a mis-press garners what feels like an outsized jump forward in your opponent’s relative suspicion, something that you aren’t prepped for that can end a carefully-played hand in frustrating disaster, forcing you to repeat the whole sequence. In short, easier to access and more consistent one-button visual cues would be most welcome.

This frustration can get compounded later in the game, when you’re stacking up techniques, getting many of them perfect only to miss a beat that feels unfair. It’s all well and good when it’s your own fault, but the card parlor host risks a controller being thrown at their coifed face when a tense session falls apart due to some “fiddly” controls.

Thankfully, these complaints aren’t enough to pull you out of the experience. While certainly not for everyone, if the setting, style, and singular gameplay intrigue you, you’ll want to keep playing in order to both learn more techniques and unravel more story and characters.

Card Shark is neither a card game nor does it play like any other game that has ever been released, which is a commendable feat in itself. Despite a few gameplay hiccups, Devolver has once again championed a unique and beautifully crafted experience that deserves the attention of both the gaming community, aspiring cheats, and the robust Venn diagram that includes both. Sorry shark fans.

They say cheaters never win, but Card Shark certainly does.