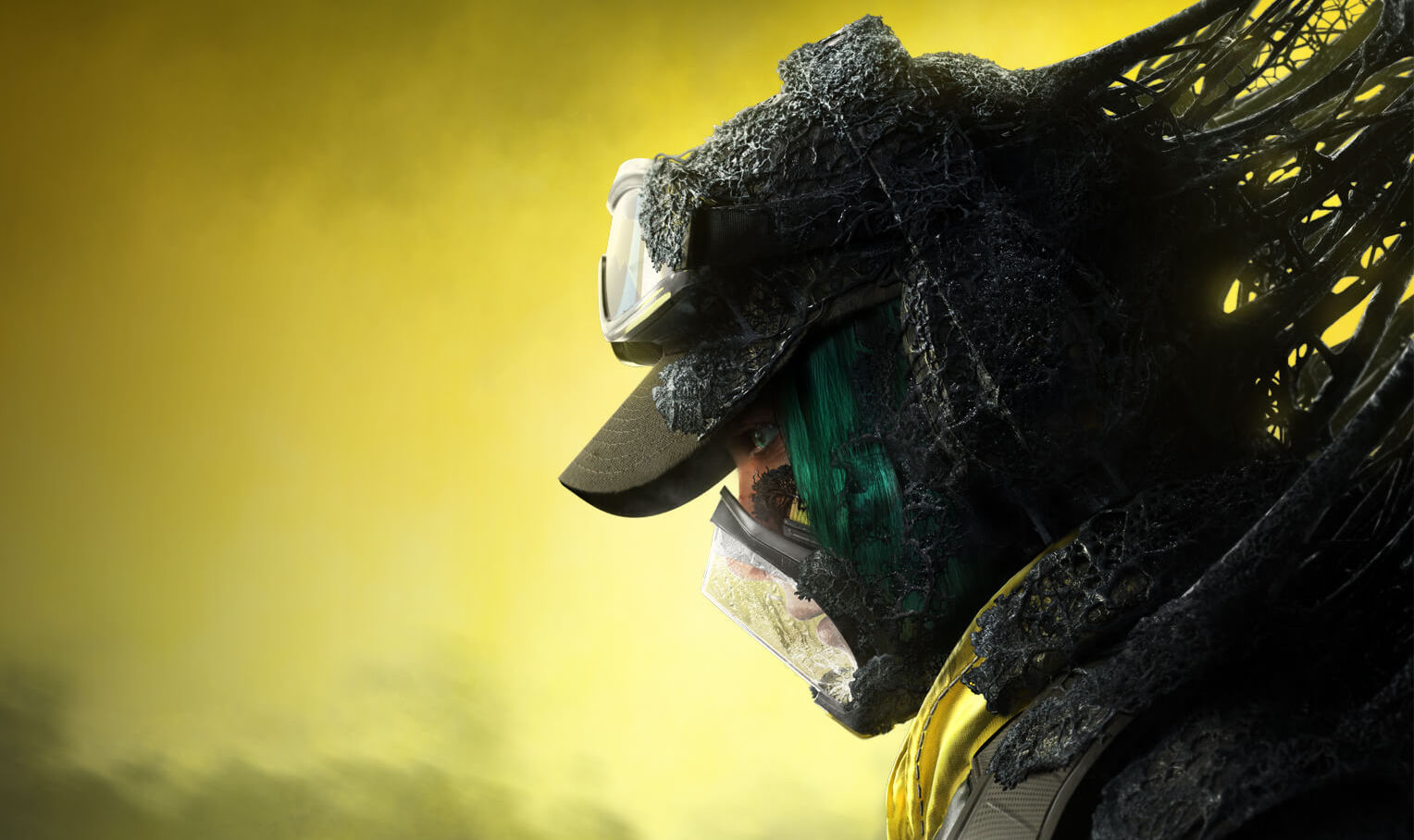 First unveiled back in 2019 as Rainbow Six Quarantine, Ubisoft’s spin-off of their online team-based Tom Clancy title Rainbow Six Siege has admirably pulled through its period of hardships and skepticism. Questioned by fans for its departure from military-esque player versus player operations and in dire need of a name change due to global events, expectations for Quarantine were constantly met for the last two years with a shrug. In a welcoming turn of events, Rainbow Six Extraction surpasses all expectations as it shockingly manages to be an entry of the Tom Clancy franchise that recuts and refreshes its roots.

Even if it may stray from the branded writer’s normalities of grounded military and espionage-driven conflicts, Extraction never acts as something that disregards its predecessors–in fact, it heavily takes advantage of where Rainbow Six Siege has succeeded.

Rainbow Six Extraction is a fleshed-out and reimagined side game of one limited-time mode Rainbow Six Siege previously held. In the 2018 game mode “Outbreak”, a three-man fireteam was sent into an alien-infected zone to clear out a series of objectives. Extraction takes the same premise and refines the concept with more distinct enemies, multi-zoned maps, a variety of objectives, and an effective progression system. While it arguably could have been a downloadable content expansion for Siege, Extraction manages to justify its existence with a healthy amount of content and proper utilization of its predecessor’s foundation.

Building off of Rainbow Six Siege’s refined engine and gameplay, Extraction naturally feels like an extension of Ubisoft’s multiplayer team-based shooter as it translates its structure into a different genre of conflict. The main difference between the two titles is that while Siege is focused on player versus player scenarios, Extraction leans all-in on player versus environment adventures. For competitive teams looking to dominate leader boards, Rainbow Six Extraction will be the next online shooter you are looking for. However, for anyone seeking a multiplayer cooperation title with friends, Extraction will more than satisfy your needs.

Like Rainbow Six Siege, while the game is enjoyable to play online with randoms or even single-player, it is intended to be completed with the help of two friends. There are accommodations for working alone, however, Extraction was evidently designed with teamwork at the forefront. Extraction requires just as much cooperation as Rainbow Six Siege’s online spearheaded. Without proper communication, it is easy to get overwhelmed and mowed down by waves of the Archæan threat. Extraction is very much a game where players should be talking over headsets and creating articulated approaches to maps for the best outcome.

Many multiplayer games yearn to create special experiences within each of their play sessions but fail to provide the needed variety to achieve that. Rainbow Six Extraction not only builds upon its returning roster of operators from Siege but continues to flesh out the complex decision-making moments its predecessor required. From the operator abilities to the weapon load-outs, Extraction wants its players to critically think about operations before their execution. The game may follow the same premise every match–go into a map, clear out one objective per zone, and exfiltrate without getting killed–but that repeating approach never grows stale.

The biggest problems players of Rainbow Six Extraction will face before having the time of their lives is a lack of cohesive tutorials and a shoehorned story that quickly diverts expectations. Rainbow Six as a franchise has evolved into something that needs deeper explanations and thorough demonstrations. The franchise has recently taken a focus on multiplayer over all else, yet Extraction manages to make minor hiccups that its predecessor arguably avoided. Without any Rainbow Six Siege experience, the first couple of matches newcomers will dive into could slowly turn from frustrating to thrilling. Meanwhile, the story sits in cold water waiting to confuse everyone.

Extraction’s VR training missions can feel overdrawn, and its unenforced presence will surely lead it to be the home of ignored tutorials. While the tutorials do teach players the ins and outs of Extraction, it is a shame they are not required to play before starting the main mode. There are a few outlier objectives that can come off as a bit complicated upon first interaction, and the addition of a random story does not help the game’s sense of focus. Together, the tutorials and story come off as speed bumps for Extraction.

For the narrative, its placement in the game just feels off and unwanted–in fact, it is almost completely incohesive. While the cutscenes have fantastic animation quality, the stories being tacked on to Rainbow Six Siege’s operators do not go anywhere or show any real prominence. The idea of having characters like Ash, Mira, and Thermite take a narrator approach could be interesting, but there is no real depth or developments in the story that will get audiences to care. Even Ubisoft’s lack of care for the narrative is shown in the game’s ending–the longest cutscene in the game is upsettingly the credits roll which is almost 15 minutes, roughly the size of every other cutscene combined. All the story does in Extraction is throw players off. Based on first impressions, it is not hard to think that the game will have an actual narrative to follow, but that story is swept under the rug.

As expected from all this, what Extraction nails is its sense of atmosphere and gameplay. Whether you are in New York City or Alaska, each location and sub-zone Extraction has is drenched with horror. The dark rooms, gooey gross sound effects of the alien threat, and the dimly lit flashlights of each player continually add this eerie tone to the game. Without a team, the single-player has moments that feel coincidentally on par with the likes of the Resident Evil series. The only aspect of the graphics that can be a shame though is how plastic-esque and unexpressive its characters are. While almost every operator is hidden behind a helmet, some of the in-game models look a bit off and under-detailed in comparison to others. It is nothing bothersome but noticeable when jumping between menus and gameplay.

On top of the brilliant gunplay and variety of abilities Rainbow Six Siege forged, Extraction’s progression system is notably smooth, fulfilling, and all-around exceptional. It carefully coincides with how players will tackle mission objectives and individual sub-zones. Ubisoft has had its fair share of recent misfires when it comes to creating fair progressions systems in their titles, but Extraction nails how players should slowly unlock items, characters, and maps. Extraction is split into different progression systems; one relies on the individual operators part of the game’s roster and the other focuses on overall performance. Even with the ability to level up and refresh an operator’s load-out, Extraction never feels punishing towards players who only play as specific characters.

However, not to play devil’s advocate after such a compliment, but it should be mentioned that the game’s microtransactions are what you would expect in a typical Ubisoft title. For anyone who dislikes how Rainbow Six Siege’s in-game store operates, Extraction’s is almost exactly the same. Littered with ridiculous costumes, charms, and gun skins, the store provides thankfully nothing necessary that would interfere with a player’s progress. It stands as an option to consider for those who are a lover of crazy cosmetics or want to rush through the progression system.

After a tame and messy development that was affected by global events, Rainbow Six Extraction has turned out to be Ubisoft’s newest sure-fire multiplayer hit. It surprisingly meets player preferences that reach both in and out of Rainbow Six Siege’s fanbase without sacrificing the best aspects of the Tom Clancy subseries’ latest iteration. Having a team you can properly work with might make or break any player’s enjoyment for Rainbow Six Extraction, but its core mechanics, atmosphere, and stimulating experience never let down.

Rainbow Six Extraction is a satisfying attempt from Ubisoft to stray from Tom Clancy traditions with a horror-esque ungrounded spin-off. For anyone who previously shrugged off the announcement, Extraction is certainly worth taking a second look at. With free new content coming soon and an already substantial amount of replayability, the battle against the Archæan threat will hopefully bloom into a larger experience waiting to surprise. It may not suit the realism Tom Clancy fans yearn for, but Extraction might just be the new multiplayer apocalypse shooter you and two friends have been waiting for.