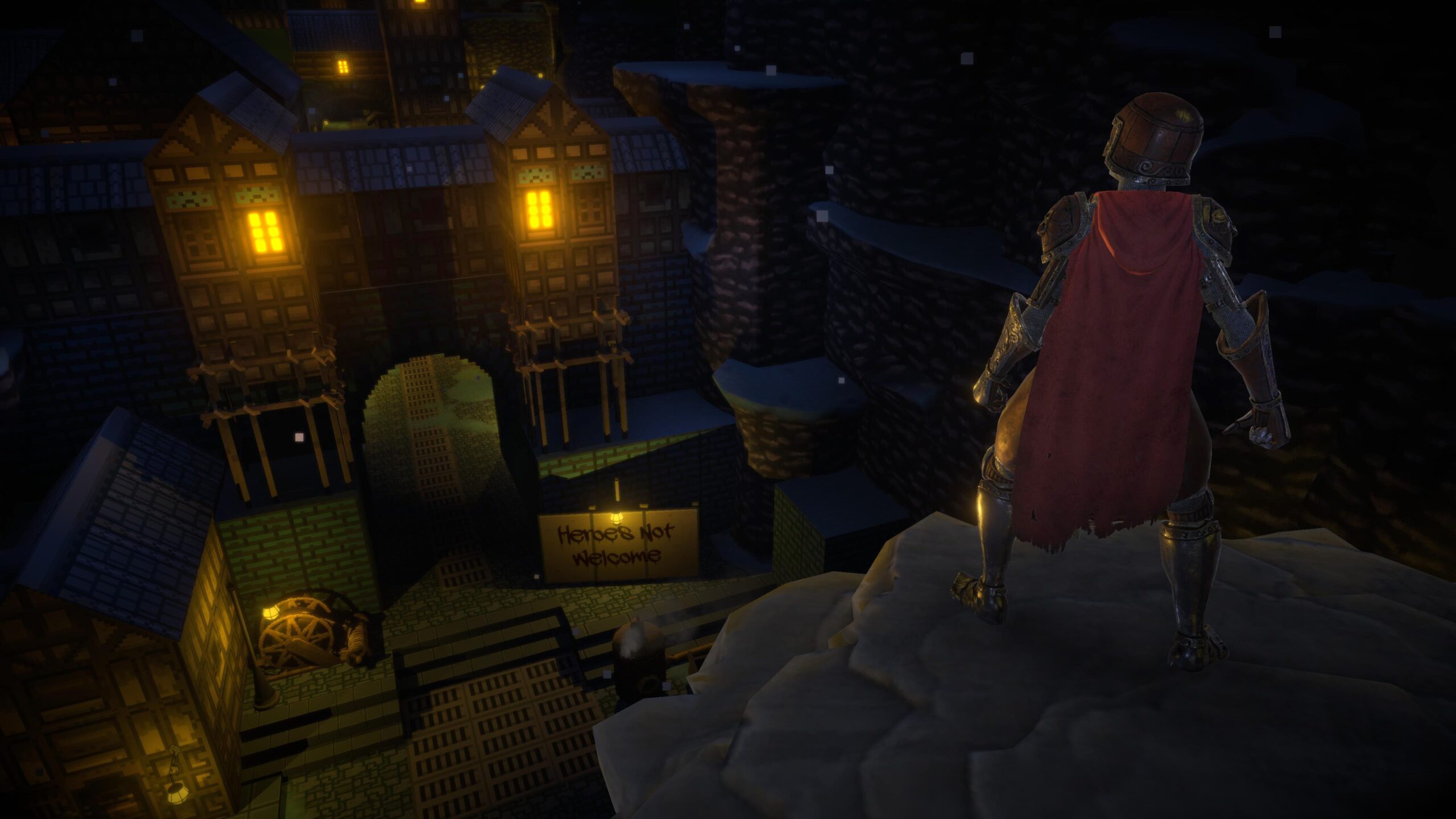 Over the Moon Games is most known as the studio behind the story-heavy, 2D horror puzzler The Fall and its sequel, The Fall 2: Unbound. At first blush, The Last Hero of Nostalgaia, a souls-like comedy with meta elements and an ever‑present narrator, seems as big of a departure as any. Yet moving to the new series was not that hard for the devs.

“Nostalgaia is tonally similar [to The Fall] in lots of ways. The Fall had its share of dark humour.” says John Warner of Over the Moon Games. Humour was always part of the studio’s DNA, in some way or another, and The Fall certainly demonstrates their experience with dark stories.

But the connection goes the other way, too: Warner adds that “The Last Hero of Nostalgaia has some terribly dark ideas and content.” But like in The Fall, “dark” here doesn’t stand for an indulgence in taboo subjects. Rather, the darkness is found in the tragic quality of the humour.

A great example, pointed out by Warner, can be found right in the premise of the game:“It’s funny that the last hope for a dying world would be an unknown stick-figure, and that the world’s denizens would just as soon murder that well-meaning hero on sight. However, it’s not just funny; there’s a real horror behind that premise. Why are the inhabitants of the world so possessed with hatred, resentment, and fear?”

Nostalgia As A Theme

What really changed from The Fall is the core identity of the games–their themes, for lack of a better word. Fittingly enough, the codeword for The Last Hero of Nostalgaia is nostalgia. And while the game plays with the concept in many unexpected ways, the final objective is to create something new.

The references and parodies too will be more than just comedic relief. They populate the game (Warner says he “[defies] players to find them all!”) and help sell the theme of nostalgia, but they also have a more practical function. Says Warner on the subject: “We have to evoke nostalgia in players, and there’s just no way to do that without references!”

The “pixelation,” a sickness spreading all through the world and turning everyone into low-rez versions of themselves, also plays into this theme. Through the quintessential video game element of Pixels, The Last Hero of Nostalgaia asks us to look critically at our relations to our past and at how this informs our actions in the present.

In this case, though, our relationship to our past is explicitly about video game nostalgia, Over the Moon understands that these suggestions can go far beyond games. “The Last Hero of Nostalgaia takes a humorous look at that subject through the lens of video games, but it’s a wide-ranging human problem. Everyone must wrestle with this subject.”

Nostalgia As A Mechanic

Talking about going beyond games, the developers promise a strong connection between mechanics and narrative: the pixelation, for example, is both a central story point and a mechanic in the hands of the player.

Warner also talks about “a number of mechanics that have to do with restoring and uncovering what once was.” Mechanics like the “Beacon of Progress,” a device that, when activated, undoes the pixelation and returns the surrounding area to high resolution.

This “turning” effect, from high fidelity to pixel art and back, is both stunning and a central piece in this theme of nostalgia. It was also exceedingly difficult to pull off with this much style.

Originally, each area was going to have its own low-fi style, but that didn’t convey a cohesive world. Warner recalls that “It was necessary to find a way to unify all of our low-rez artwork so that it belonged in the same universe. It also needed to be quite different from the more realistic high fidelity style, so the shift was noticeable.”

The style they landed on leans in on the juxtaposition caused by 2D sprites in a 3D world, while still reading clearly as low-rez to any player. That’s the second benefit to this art style: approachability. Players can recognize the pixel art as a staple of 2D console classics until the PS1, or it could fire up their memories of billboarded sprites from the original DOOM. Either way, they are certain to immediately tell the low-fi characters from hi-rez ones.

The past is a central theme in The Last Hero of Nostalgaia. That’s why the developers are delivering “engaging narrative mechanics,” to make uncovering the history of this world a vivid experience.

Warner adds that the studio is working on “a bunch of mechanics that start in the narrative layer and feed directly into combat.” This is The Last Hero of Nostalgaia’s biggest bet, to merge the narrative and gameplay layers into one.

The idea of uncovering the world’s past, bit by bit, was certainly inspired by the Dark Souls franchise, as the developers consider the series a great inspiration. Looking at their work, it’s easy to see why. Warner sees this series as one where the player “uncovers fragments of the past that are so faded that it’s almost impossible to piece them together.”

Over the Moon Games has taken this simple observation and run with it, stretching the background narrative of the Souls series to cover every facet of the player’s experience. As Warner notes, “The Last Hero of Nostalgaia is an attempt to take some of those beautiful ideas and pull them into real clarity in the gameplay layer.”

Lifting Ideas In A Dance Of Meaning

Over the Moon Games has come to this project with the full intent of making an innovative product, though they add that it’s up to the players to decide how groundbreaking it will be.

Last time, it was a success. After all, this is the studio behind the award-winning genre-bending of The Fall. This time around the innovation will be a bit different, as it has more to do with theme and focus.

Talking about what makes The Last Hero of Nostalgaia innovative, Warren says that the studio is sharpening the beauty they found in their inspirations. This beauty will come into new depths, becoming the core of their project.

One can certainly read Dark Souls as a game about uncovering the past, but as Warren notes, “those ideas are subtle. They’re not in the plot, or in the mechanics. […] They’re… quiet, like a whisper from behind a wall.”

One core aspects of The Last Hero of Nostalgaia, one that the game’s public identity is predicated upon, is the souls-like combat influences. Instead of stopping there, the team has made the idea of discovery, hidden inside the Souls series, into the all-encompassing core of their new project.

This is a far greater endeavour than what it seems: characters, stories or mechanics alone won’t do. The whispers from beyond the wall are what the entire experience is built upon. This, in Warren’s words, is “the most exciting way to innovate in the games industry.”

The game doesn’t need to serve the theme because the two are simply indistinguishable: the dream is to produce “beautiful ideas so richly [realized] that to play a game is to embody them; to allow them to lift you up in a dance of meaning.” An ambitious goal, but in the end, The Last Hero of Nostalgaia is happy to just be a contribution, big or small, towards that dream.

With their experience and pedigree, and an established following to their games, Over the Moon has all the rights to aim high. They also have time for a few last touches, but not too much: The Last Hero of Nostalgaia is scheduled for release sometime in 2022, and new gameplay footage has come out just today.