It’s not easy to tell a compelling story in a video game. Some take the more visceral, linear approach of God of War, and others go for the more cutscene-heavy style of Xenoblade Chronicles 2. As compelling as the respective narratives of those games are, though, neither make you feel as directly involved in the plot as The Banner Saga does. Instead of being lead through a series of carefully manicured setpieces/ intricately designed cutscenes, The Banner Saga allows players to carve out their own adventure in ways that feel sincere and meaningful.

Just like Hollow Knight, Banner Saga is a brilliant example of the high production value one can achieve through a successful KickStarter campaign. The art is clean and vibrant, character animations are fluid, and environments are intricately detailed to the point of being scene-specific (upon encountering enemies while on a rescue mission in the middle of town, I actually fought in said town square with the rescue visibly on the side of the grid). This level of visual detail combined with stellar writing throughout (save for a few typos here and there) and sparse but convincing voice acting often makes Banner Saga feel more like a AAA effort than something from a small indie studio.

In many ways, Banner Saga feels like it was built on the bones of the age-old classic The Oregon Trail. There isn’t so much a strong overarching story as there is a focus on character and caravan development. Opening events set the stage for a grandiose premise, but it essentially boils down to the Dredge (an evil force made of stone) invading the land, terrorizing civilians and wiping out armies, and threatening the extinction of both humans and varl (a powerful giant-esque race) in the process. There’s tons of world-building and Norse lore that bring Banner Saga’s world to life, but its central narrative is firmly one of escape and survival.

Its similarities to The Oregon Trail play out in the game’s structure. Players lead a ragtag caravan of refugees as they travel across the land trying to find some semblance of a safe haven.  Throughout this journey (which is told from multiple perspectives) players are presented with a wide variety of events that directly impact caravan morale, health, supplies, and safety. These can be anything as minor as joining in a group celebration and raising caravan morale, to welcoming a group of stragglers into the group only to have them steal supplies or kill other members in the middle of the night. The sheer number of choices that affect your experience is staggering, and makes the game ideal for multiple playthroughs to try out different outcomes.

Included with events, caravan management is a central part of the experience. Players are tasked with balancing decent levels of morale and supplies, stats that all-too-realistically decrease with each passing day. Hitting rock bottom in either category results in an increased death toll that ultimately impacts the fighting forces a player has access to during large skirmishes. Winning these skirmishes can mean the difference between gaining valuable items and losing your favorite party members, so the need to have sufficient fighting forces can’t be understated.

When you’re not running and trying to keep your caravan alive, you’ll be engaging in Banner Saga’s unique brand of turn-based strategic combat. Before each fight players have the chance to select up to six fighters that range from archers and swordsmen to a variety of incredibly powerful Varl. Varl are so strong, in fact, that having one on your team almost feels like cheating for the first couple hours. They can sometimes do 9 and 13 points of damage where others can only do 2 or 4, and their health is significantly more substantial to boot. 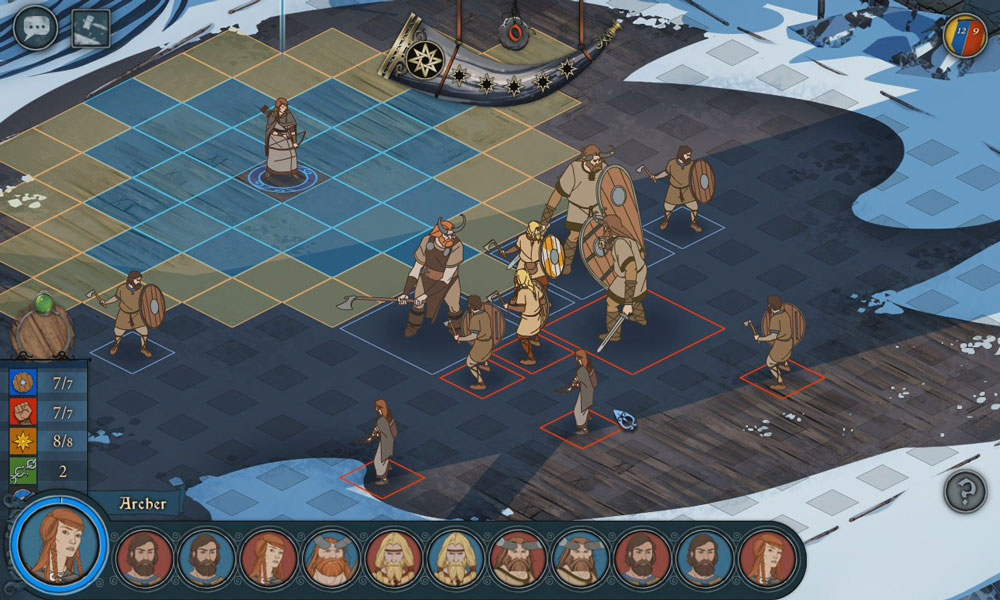 The actual combat of Banner Saga is the only area in which the game slightly falters. In some ways it feels like it’s Fire Emblem (or any other industry standard tactical RPG), but with a few confusing elements thrown into the mix. Instead of a weapon triangle or some other form of establishing unit strengths and weaknesses, players are presented with a separate armor gauge that never seems to work quite like it’s supposed to. Within the tutorial info dump the armor gauge is explained as something that should be whittled down before directly attacking an enemy. Your strength – their armor = damage taken. Sounds pretty straightforward, right?

While simple in theory, this becomes infuriatingly unbalanced later on when facing the game’s central threat: the Dredge. As players make their way to Banner Saga’s deeper chapters, Dredge start skirmishes with 12, 16, or even 18+ strength. In these scenarios, any units other than Varl become completely nonviable. The health of human units is so low–regardless of weapon type–that they can easily get one-shotted. Even archers, while able to get a few shots off, rarely last until the end of a match against the Dredge.

The Banner Saga experience is at once challenging, addicting, and frustrating. The character building and caravan management portions of the game are absolutely brilliant, and deserve to be experienced by anyone who was thrilled at the promise of being able to carve out his or her own destiny in games like Mass Effect and Fable. Banner Saga’s tactical gameplay is also truly enjoyable, but the strategy-RPG system as a whole here feels noticeably less spectacular when compared to its other elements. Favorite characters become useless in late-game battles, level-up systems feel generic due to the lack of character-specific upgrades, and managing units on the battlefield can sometimes be a slog due to UI obstructions. The Banner Saga is a beautiful experience as a whole, but all of its limbs aren’t equally as strong.