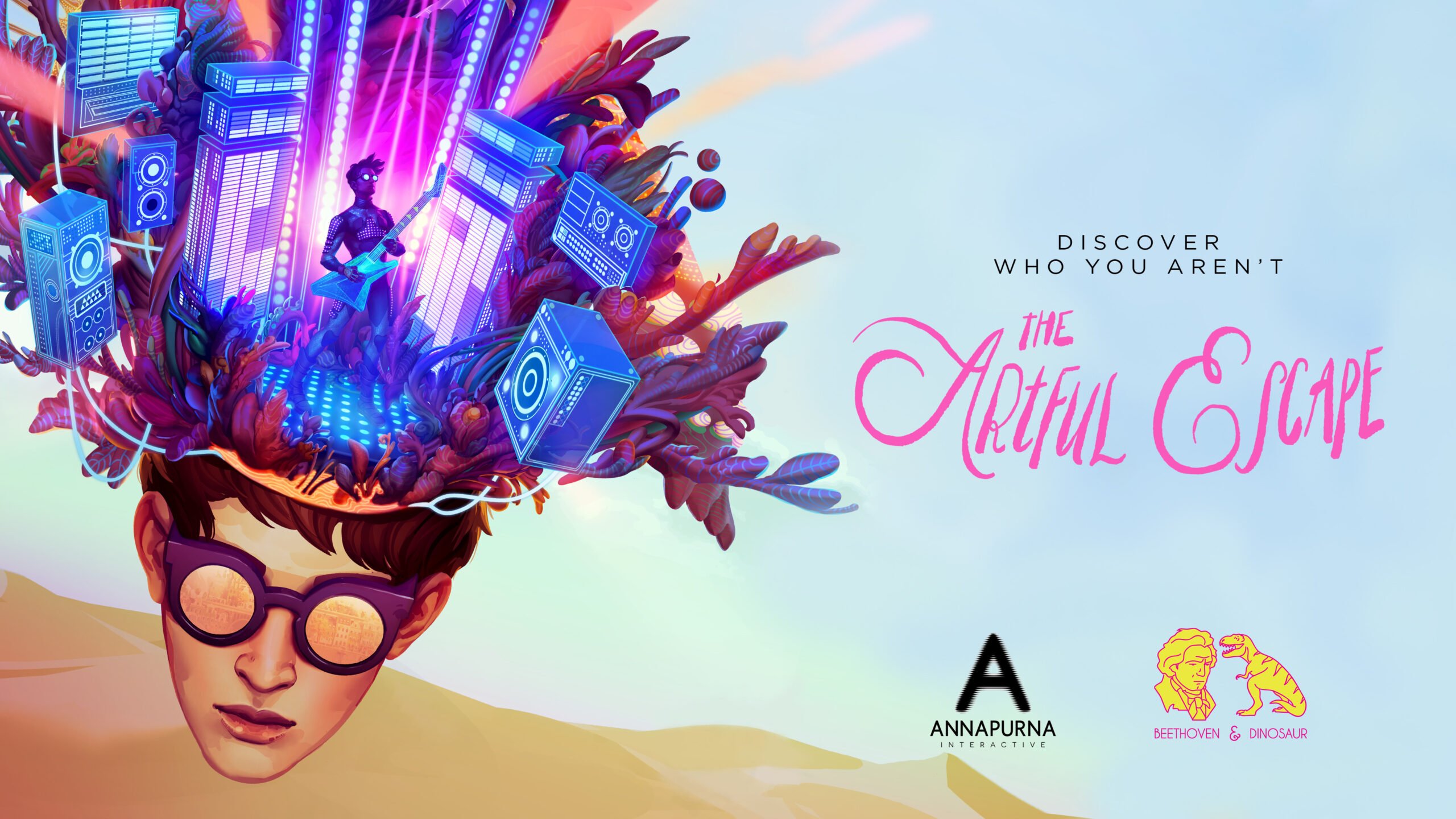 At a glance, The Artful Escape seems like another masterpiece from publisher Annapurna Interactive. Bursting with uninhibited creativity both in presentation and premise and boasting a remarkable voice cast, this musically themed platformer and adventure game have all the makings of a classic. But sadly, developer Beethoven & Dinosaur fails to take advantage of their novel ideas and the result is a depressingly bland and boring game.

The Artful Escape begins with promise thanks to its compelling conceit. The story follows fledgling artist Francis Vendetti, nephew to the iconic Johnson Vendetti, a folk singer with more than a few similarities to Bob Dylan. The problem for young Francis is that no one sees him; they only see his uncle. Francis doesn’t like folk music, he doesn’t even like to sing. Instead, he loves shredding on an electric guitar. This creates immediate intrigue as Francis is torn between his passion and the hopes everyone has placed onto him. Wanting to escape but unsure how Francis finds freedom when an intergalactic rocker named Lightman whisks him away to tour the galaxy.

The story has many similarities to works such as Alice in Wonderland and Spirited Away: a fantastical adventure unfolds whereby the protagonist comes to terms with their mundane, but burdensome, inadequacies. So, the basic situation may not be novel, but the presentation and charm certainly are. The Artful Escape oozes punk in everything from its dialogue to its world. There’s an unapologetic whimsy that reminds one of Rick and Morty and Adventure Time. There are no attempts made to explain anything and the game relishes in the absurdity of the infinite. Again, the bones are there for a wonderful story and experience. Unfortunately, The Artful Escape falters both in its story and gameplay.

The Artful Escape’s narrative has appeal, containing witty dialogue and excellent voice acting, but it is bereft of soul. Francis’ journey to self-acceptance lacks the human struggle that makes similar stories, like Spirited Away, so resonant. From the get go, everyone who hears Francis play electric guitar loves him. When he travels the galaxy, everyone tells him how awesome he is. No one challenges him to accept limitation or the inevitability of failure.

There are references to complexity through Lightman, who’s a shadow of his former self and feels his talent fading, but it comes across as mere lip-service, never actually wrestling with the painful implications. The result is an empty power fantasy that lacks any sense of drama or stakes. It’s especially unfortunate because the writers clearly have insight and talent. There are a couple of moments in the game, especially early on, that is outright profound. A conversation Francis has with an alien entity about the burden of names is something I’ll always remember. It’s a pity such thoughtfulness is lost by the time The Artful Escape comes to its generic, easy ending.

The Artful Escape’s shortcomings extend beyond the story and are present in all facets of its gameplay. First, there’s the spotty implementation of choice. Throughout the game, the player chooses from dialogue options when talking to characters and makes decisions that determine Francis’ stage persona. At first blush, these elements amuse since they contain moments of comic brilliance (the options for the homeworld of Francis’ alter ego are delightfully insane, such as a world where the government ratifies a new, official language every three hours). The problem: none of these choices have consequences or lead to any variation inexperience. There are no unique encounters and, for the most part, NPCs respond the same no matter what Francis says.

Compounding all of these issues is Francis’ stage name, which the player makes from scratch. Since the name is not selected from a list of options, and every line is voice acted, the game bleeps out the stage name using a guitar riff whenever anyone says it, making it sound like they’re cussing Francis out. It’s jarring and breaks any sense of immersion.

The bulk of The Artful Escape’s gameplay is built around monotonous platforming that fails to capture its musical intention. The platforming is clearly intended to mirror the brilliant music levels of Rayman Legends but they’re nothing but poor imitations. The visuals and background music in these sections are undeniably beautiful – and the way the plants and animals respond to the music is also delightful – but the platforming feels removed from all that is going on. The player simply holds down a button to play the guitar while occasionally tapping another button to make Francis jump over small gaps. Not only is this boring, but it doesn’t connect with the music since it’s in no way rhythmic. Francis just plays the same note on his guitar over and over and when he jumps it doesn’t match up with the music. The gameplay in these sections only serves to lessen the beauty of the presentation; it’s tragic.

Aside from platforming and dialogue decisions, The Artful Escape contains one other type of gameplay in the form of rhythm-based mini-games which sort of serve as boss battles. Unfortunately, these battles are just as bad, if not worse, than the platforming. In these sections, the player must copy the notes played by an NPC by pressing the corresponding buttons. Rather than feeling like you’re playing music, or at least taking part in someone else playing music, these sections feel like Simon Says. Seemingly afraid that Francis cannot keep up, each NPC plays their notes in fits and starts, preventing any cohesive music from being formed. In the end, Francis and the player play some simple notes, in no way showing off the brilliant talent Francis supposedly possesses. The emphatic praise Francis receives after these sequences are so unearned that it made me wonder if the characters were sarcastically mocking him.