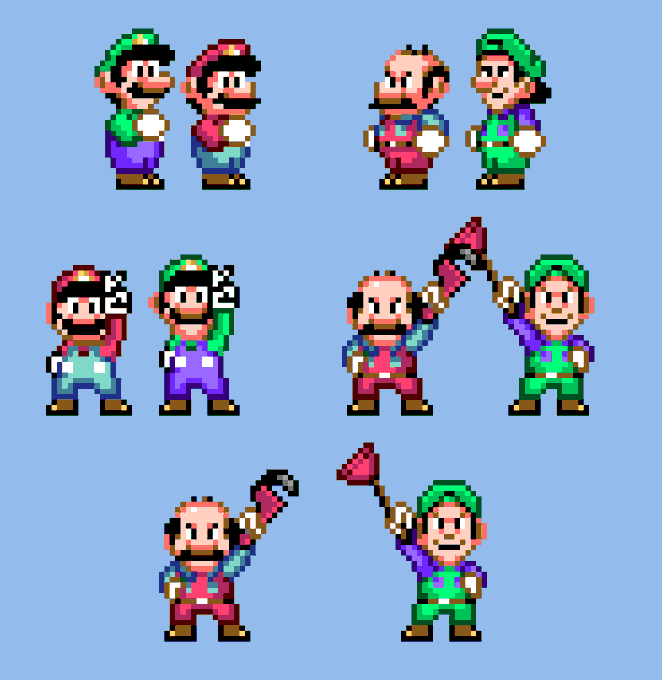 I think that anyone who knows of the 1993 Super Mario Bros. movie knows that we do not talk about the 1993 Super Mario Bros. movie. It’s bad. Very bad. Painfully bad. Thankfully, it is the level of bad that becomes amusing due to some of the bizarre decisions when it came to character design, plot and…well… just about every other aspect of the movie too. However, this sprite art from Twitter artist Izzie Rae- a.k.a @ArtistIzzy– works surprising well when using the Mario and Luigi designs from the film (though I will never understand the decision to not give Luigi a moustache).

Izzie Rae’s sprite art is absolutely fantastic; looking like it was ripped directly from a SNES game based on the movie (wouldn’t it have made sense to make something like that to promote the film? Actually, it probably wasn’t worth it, let’s be honest). I love the little poses and expressions too as they reflect the movie versions of both Mario and Luigi excellently. Mario has a little scowl- as Bob Hoskin’s Mario was certainly a somewhat grumpy take on the Italian plumber- whilst John Leguizamo’s Luigi is sprite…well he is just Luigi without a moustache. Who okayed the decision to not give Luigi a moustache???  I don’t care if he is meant to be younger. He can be younger and still have a moustache! This still bugs me and will likely do so forever more.

Izzie Rae does loads of other awesome Mario themed sprite art- like this Princess Peach sprite art that shows her in a fire themed outfit in Bowsette style- so make sure to check out her Twitter for more of her work.