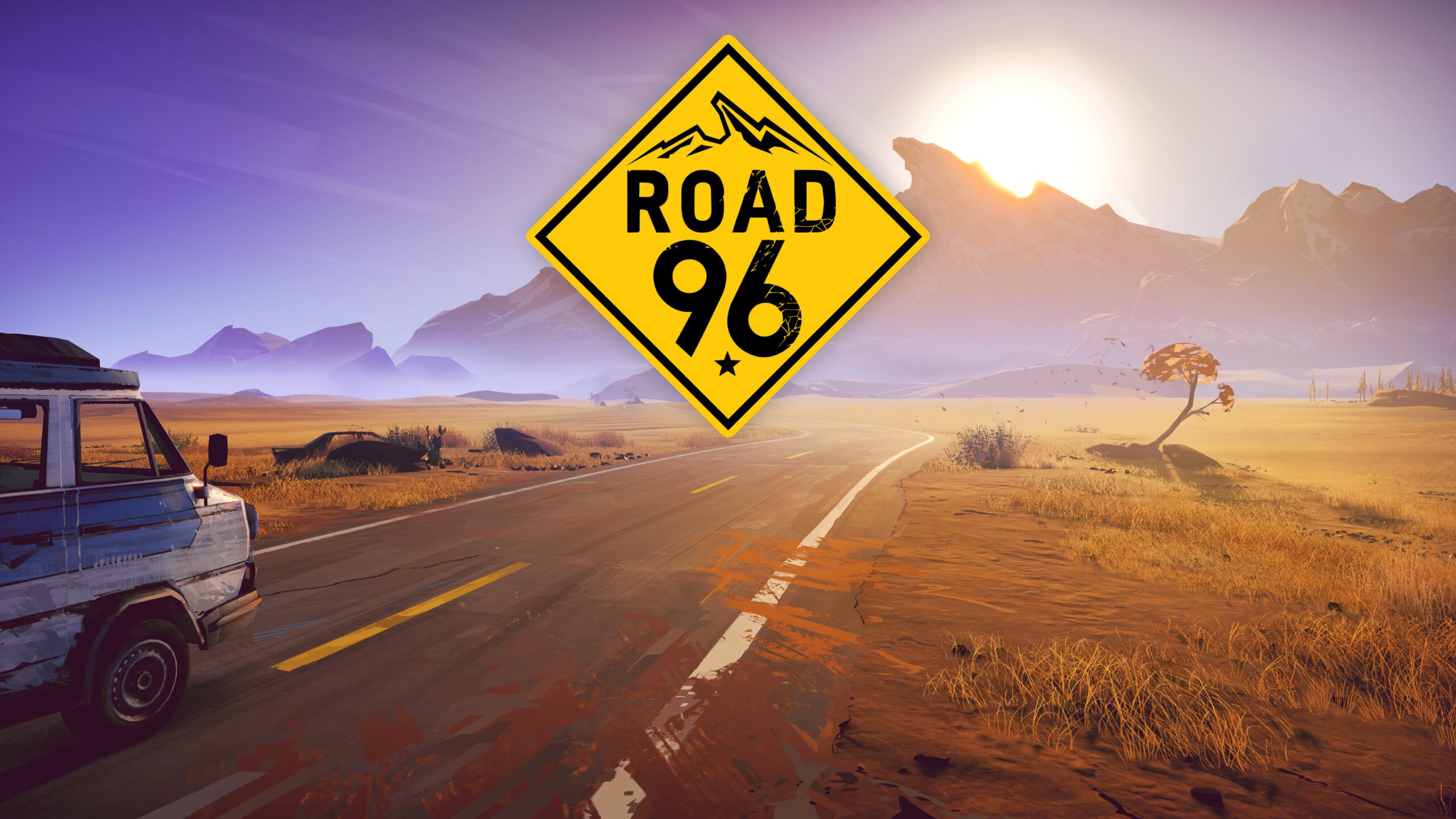 After Road 96 debuted at the Game Awards, the game’s site crashed. The event’s record-breaking 83 million viewers proved a little overwhelming, not just for the game’s site, but also for Yoan Fanise and his small 10 person team at DigixArt. “The reception to the trailer was huge! Everybody was intrigued. We got so many comments asking ‘What is this game?’ and saying ‘Wow! the art direction is so cool,'” enthuses Yoan over a video call.

Road 96’s trailer, with its striking visual style and lush synth score, provides an intoxicating snapshot of a game with seemingly boundless ambition. It promises a procedurally generated, story-focused road trip through a dystopian 90s-tinged fiction that draws on everything from Life is Strange to Tarantino. Intrigued by both its arresting aesthetic and its unique approach to storytelling, I spoke to Road 96’s creative director Yoan Fanise to find out about the challenges of bringing his vision to life.

Look at the same YouTube comments that bombarded the DigixArt team with approval after The Game Awards and you’ll see plenty of people raving about the trailer’s song, Toxic Avenger’s “Home Call”. “I told him [Simon Delacroix AKA The Toxic Avenger] about the game, its story, its themes, and he got back to me the next day with that song. I created a trailer to go with it and they worked together perfectly,” Yoan explains. While key to the success of Road 96’s trailer, music is also a vital part of the game itself.

Any good road trip movie (Almost Famous, Easy Rider), and by extension game, needs a strong soundtrack to punctuate the highs and lows of its journey, and Road 96 is no exception. “We don’t want just one genre of music, because the game centers around eight different characters,” Yoan explains. “Fanny is different from John, who is different from Jared. We thought about what these characters would listen to on their walkman or car radio and sought out nine musical artists to contribute all-new music written especially for the game. When it came to playtesting the game, people would often know which character they were about to interact with because of their musical signature.”

Equally important in bringing personality to both Road 96’s world and characters is the game’s art style. “We knew we wanted it to be 3D but we are a small team, so realism isn’t really a possibility. Instead, we kept it simple but bold. We didn’t want a low-poly art style but rather something angular with plenty of vivid colors and textured brushstrokes.” With this approach in mind, Yoan turned to Bastien Grivet (Spider-Man: Into the Spider-Verse, Love, Death and Robots), a local to DigixArt’s hometown of Montpellier, who provided two concept pieces as a basis for Road 96’s look. “He has such an energetic style. The colors and textures he uses are so emotive and perfect for Road 96, so we used the pieces he created for us as a guideline to inform our approach to the game’s aesthetic.”

This pursuit of capturing emotion while functioning on a small budget led DigixArt to invent some ingenious DIY solutions to common indie obstacles. “We created a system of performance-capture using the iPhone 10’s infra-red facial recognition technology. We modified that tech and used the real-time data in Unity to record our actor’s facial performances when they delivered their lines. It’s not AAA quality motion capture but for us, it’s a great workaround.”

All of this art, music, and innovation would be fruitless without a strong narrative core to build themselves around. “The games we’ve made before had a strong visual style but maybe didn’t draw you in as an experience you really want to get lost in. Road 96 feels like a big step for us and I think it’s really something people will want to dive into,” Yoan declares.

DigixArt’s previous titles Valiant Hearts and 11-11: Memories Retold, both set during World War 1, focused on the hardships of that era and the personal price individuals pay in times of conflict and unrest. While Road 96 may seem a distinct departure from these themes, it shares much of that same DNA. “Road 96 is definitely about those big questions of war, death, and sacrifice but in a contemporary context. What if this happened in your country? Because it is happening now around the world. So we ask, what would you do? Would you start a revolution? Would you opt for democracy? Or would you flee across the border? You have those options in the game and while there’s no good or bad, no judgement, there are consequences.”

Despite retaining these more serious themes, Road 96 is not all gloom and doom, even if Yoan does show a preference for the bleak. “We have eight characters and three main plots that are interconnected, so there’s plenty diversity. There’s a real variation of tone. It’s not all serious. The game is all about who you meet on the road. One moment you might have a crazy encounter with a pair of bikers but the next scene may take a darker turn as you meet a young boy alone on the road or a sinister stranger. It’s about those peaks and valleys” Yoan elaborates. “On our previous games we were looking at real-world events and after six years focusing on that, we needed something more fun because games are meant to be fun. I’m French so I love a sad story where everyone dies at the end, but my fellow writer Yan, an American living here in Montpellier, helped offset that and brought some balance and levity to my more morose tone,” laughs Yoan.

Beyond Yan’s influence, Yoan cites the work of directors including Tarantino, The Coen Brothers, and Bong Joon-Ho as key inspirations for Road 96’s approach to tone, structure, and characterization. “I love (Bong Joon-Ho’s) Parasite. We started the game before it came out, but much like that film, we have this structure where the story shifts between comedy and tragedy.” Speaking to Road 96’s vision of a 90’s quasi-America, Yoan continues “That aspect of our game draws on Tarantino and The Coens. The bizarre characters and the way dialogue is written in films like Fargo, I tried to capture that sort of style in Road 96.”

“We also play with 90’s clichés and pay homage to that decade and its cinema. Tarantino often references other films he loves through the way he shoots or frames certain scenes and we similarly make those nods. We have a robbery scene in a dinner that echoes Pulp Fiction through its tone and dialogue. There are loads of little references throughout the game and I can’t wait to see people pick up on them when they play it. For our next project, I would love to work with a movie director, The Coens or Tarantino or even Christopher Nolan. I would love to make a game with Nolan!” Yoan adds eagerly before amusingly admitting that “he’d probably overlook an indie developer like us.”

Cogs In A Machine

Nolan aside, Yoan’s ambitious approach to storytelling seems to succeed even that of the auteur director himself, especially if his latest effort is anything to go by. “The game’s structure is procedurally generated. It’s not a branching narrative in a traditional sense but more like a deck of cards. At the beginning of the game, we ask the player four questions about themselves, covering things like political views and their taste in media and then the game creates a player profile. From there, an AI picks a sequence to start with and every choice you make informs how the AI selects subsequent sequences.” Yoan continues, “We like to think anything can happen at any time for the player. There are no events that remove huge chunks of the game, nothing that bottlenecks your experience even if that would make our job simpler. The core of the game is this system.”

Yoan offers a clearer illustration of this system in action. “We did a playtest with a brother and sister. They each played about 3 hours of the game, then went home and discussed their experiences. They came in the next day saying ‘It was totally different, we saw totally different stuff.’ Some people may hate one character because of the situation or context they encounter them in, but they may only get half the story. Different dialogues, story events, and characters can interact in countless different ways so you really craft your own journey on this road trip,” summarizes Yoan.

Delving deeper into the genesis of this system, Yoan describes Road 96’s origins. “It took more than 2 years to make this system work and we’ve refined it over and over to ensure that everything flows together and that people understand the story. Originally, it was essentially a text adventure, so using that foundation, we built the visuals, gameplay, etc. on top, fleshing each scene out one at a time. The process of translating did present challenges. It’s one thing writing out a scenario, but that doesn’t necessarily mean it will always work as a fully interactive 3D scene, so there has been lots of rebuilding and tweaking.”

Hand-in-hand with Road 96’s diverse approach to storytelling is its equally varied gameplay. “We think of each sequence as having a Kinder Surprise,” jokes Yoan, “something new for the player to experience in every scene. It might be a mini-game or a new style of gameplay, whatever makes sense to the story and context. Play is important as a child for building connection, so we use that same logic when you enter a new sequence or meet a new character. The best way to connect with that situation or person is through interaction and the relationship that that interaction establishes leads to a deeper connection in storytelling.”

DigixArt has also embraced a feature of Google’s Stadia platform to enhance player connection to Road 96’s choice-based storytelling. “When you stream the game, you have the option of allowing your viewer community to make in-game choices through a voting system. Stadia’s crowd choice feature was straightforward to implement, and for a narrative experience like Road 96, it fits in perfectly.” While currently exclusive to Stadia, this feature certainly adds an extra layer to Road 96’s choice-based storytelling while reframing its single-player journey as a more communal experience.

From its vibrant visual design and eclectic soundtrack to the complex network of cogs ticking below the surface of its procedural narrative, Road 96 holds immense promise. A promise that I cannot help but get excited about as I listen to Yoan exalt over the project with a palpable passion. With a 2021 release date set in stone, we thankfully do not have long to wait until we can discover where this journey takes us and what we will each discover along the way.