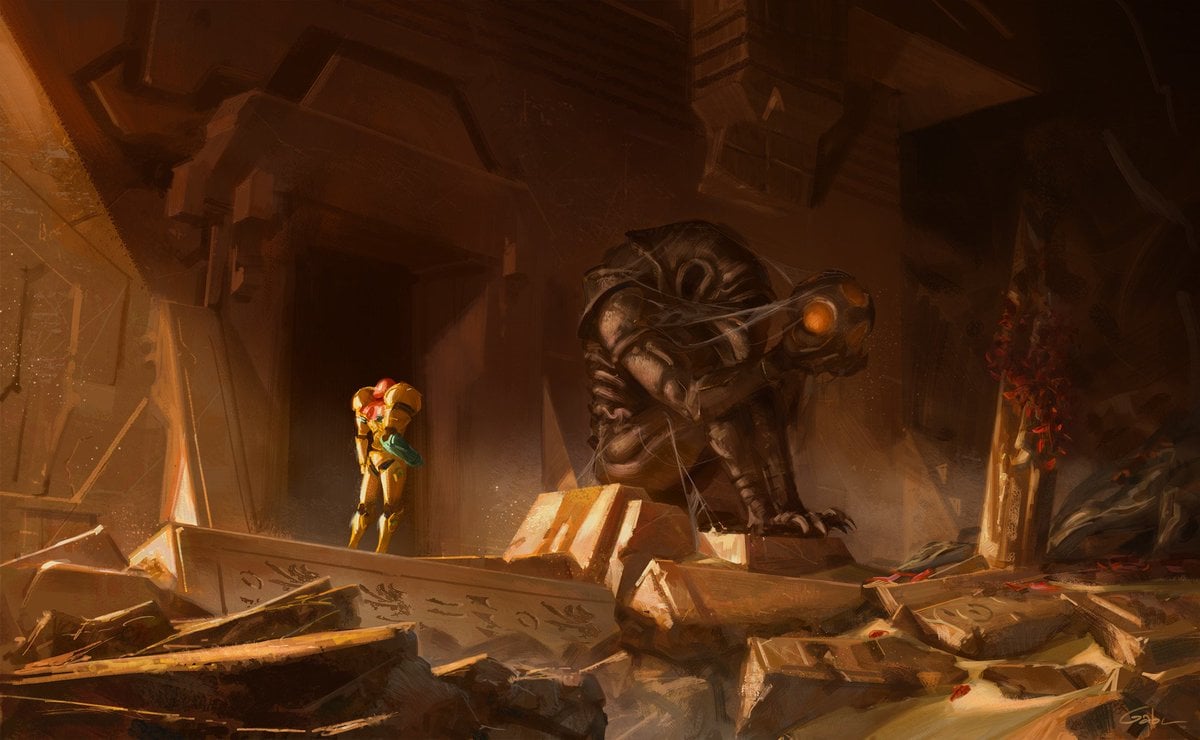 After diligently playing and writing about Metroid Prime region-by-region, it’s time to siphon my thoughts down into the shallow, quantifiable, clickbaity realm of ranking. Below is my list of Metroid Prime’s regions from worst to best. I devised the final ranking based on two ephemeral and subjective criteria: how good it is and how much I liked it. Feel free to praise or critique my list in the comments, but feel even freer to post your own list. Opinions are just opinions and I’d like to see how my thoughts and feelings compare to your equally valid ones! And check out longer analyses here.

The Impact Crater is more of an elaborate final boss chamber than a full region. Yet given its tiny stature, it is surprising how quickly and thoroughly it establishes a unique sense of place wholly unlike anywhere else in Metroid Prime. It may be severely lacking in complexity, depth, and diversity compared to the other, much larger regions, but the boss battle it houses is first-class, and most of the game’s narrative and procedural threads feel like they come to a fitting conclusion here. In short, it does what it’s supposed to do quite well, albeit so briefly that it is difficult to consider it its own distinct region.

The Phazon Mines are a conundrum in that they stand out from the rest of the game in their blandness and mediocrity. While most areas are grand successes in at least one arena, little about the Mines feels masterful and much of it feels like it was hastily tossed together on a shoestring budget. While Metroid Prime is typically polished to a tee, the Phazon Mines frequently evoke the more generic and less successful shooters of the early aughts, which commonly lacked character and charisma. Almost nothing about the Mines is more appealing than the rest of the game, and although that may be somewhat intentional, the Mines are the only part of the game I remember disliking fifteen years ago, and they are still the only part of the game I don’t look forward to revisiting.

Every region in Metroid Prime embodies the game’s values to some degree, but if there were a region that feels designed by a different team, or copied and pasted from a different game, that region would be Magmoor Caverns. Magmoor Caverns is a burning contradiction. It is the most interconnected region in the game but by far the most linear. It feels hot-as-hell aesthetically but doesn’t do much with it procedurally. Its few unique enemy designs are formidable, but they’re easy and there is no boss to back them up. More so than any other region, the Magmoor Caverns leaves me wondering what could have been. There are regions I like and regions I dislike, but Magmoor Caverns is the one I most dislike disliking because it easily could have been so much more. Despite its scorching heat, it is the most underbaked region in all of Metroid Prime.

The Frigate Orpheon’s first incarnation teaches the player everything they need to know to thrive on Tallon IV, while its second incarnation provides the sense of a living, changing, changeable world rare in the early aughts. The major downfall of both incarnations is that they don’t always accomplish their objectives as elegantly as they could. They sometimes introduce unnecessary elements, repeat the same elements too many times, and are narratively or logically inconsistent. These relatively minor blemishes end up compounding to make the Frigate Orpheon less of a flawless, calculated, legendary experience than I imagine it is in the memory of many gamers, but it’s hard to hold too much of a grudge against this fateful ship. In many regards, it is Metroid Prime’s most ambitious region, the one most deeply tied to the game’s central values of world-building and exploratory storytelling. It is farther from perfect than I remembered, and in many regards inferior to Super Metroid’s remarkably similar opening, but the Frigate Orpheon is still a comprehensive and thoughtful distillation of an introduction to Metroid Prime.

In a few regards, the Tallon Overworld seems slightly half-baked. Its storytelling is underwhelming, its boss battle a bit disappointing, and the X-Ray Visor a game-long drawback. However, the Tallon Overworld generally succeeds with flying colors in what it sets out to do: provide a memorable home base and immerse the player in Tallon IV’s natural beauty and ecology. That moment when the player initially disembarks from Samus’ gunship and surveys the Landing Site is among the most memorable in all of Metroid Prime for its beautiful blend of realism and surrealism. And for console gamers like me who played the game back in 2002, it was clear at first glance that the world of Tallon IV would set a new high watermark for depth and detail in first-person games. To this day, the Tallon Overworld remains a region I feel reluctant to criticize despite its imperfections, as it somehow still manages to cast its enrapturing spell on me the moment raindrops first hit my visor.

Phendrana Drifts is the most striking, unforgettable, and awe-inspiring region in Metroid Prime. While certain aspects of its design are derivative of other regions, and certain areas of its world work far better than others, its astounding presentation and brilliant minimalism make it a crisp breath of fresh air that doesn’t fall prey to some of Metroid Prime’s more pervasive flaws, such as backtracking and under-telegraphed collectibles. For many players, there are few experiences in the entire medium that rival Phendrana Drifts in impact and ambiance, and it remains one of the (if not the) definitive ice worlds in games.

The Chozo Ruins may not be Metroid Prime’s most awe-inspiring region, but they are its most densely realized and carefully constructed. Its consistent mix of diverse gameplay with groundbreaking storytelling succeeds as much on an inch-by-inch scale as it does conceptually, exuding a depth of thought and attention to detail lacking in larger-scale regions. While elements of its art might be drab or repetitious, no other region so seamlessly blends the scanning, explorable environments, light puzzles, and strategic combat that make Metroid Prime’s gameplay so utterly unlike anything else that people still debate its genre over fifteen years later. In terms of sheer design, the Chozo Ruins represent Metroid Prime at its finest, striking a delicate balance between openness and linearity, story and lore, puzzles and combat, and old and new.