Nintendo’s Super Mario is the iconic game character. Back in the 90s, he was more familiar to children than Mickey Mouse. Today, he’s the head of a franchise that’s seen over half a billion sales and over twelve billion dollars (adjusted for inflation) in gross sales. He’s an icon whose popularity has exploded since his introduction in 1981’s Donkey Kong. His brand has gone everywhere: games, comics, TV shows, the Olympics, and, soon, even as a Theme Park and movie. He’s universal.

But, what makes Mario so popular, so easy to market for Nintendo? Why is he so incredibly versatile? The answer, as it were, lies deep within his history, his design, and the draconian policies underlying Nintendo’s iron grip over their IPs.

No kidding. From the time where he was a measly 208 square pixels, to his modern incarnations, Mario’s mustache stands out as his most defining feature. Its cartoony, almost cloud-like shape make it iconic. Replicated in art, even by itself, it is still, obviously, Mario’s mustache. Arguably one of the most famous pieces of facial hair in commercial history, it augments Mario’s look in a way that no other aspect of his appearance does. He’s changed his outfit, hat, and even his body in previous adventures, but, through all of his iterations, his mustache has remained.

From the NES, to the SNES, the Nintendo 64 and beyond, Mario’s mustache has remained an indelible part of his character, the most recognizable aspect of his outfit and an enduring part of his persona. In some ways, the mustache makes the man in Mario’s case.

He’s changed many times over, but Mario’s mustache has remained a staple of his appearance.

Except for Kirby, whose pink, marshmallow-like complexion makes him perhaps the most huggable character in Nintendo’s history, Mario is as sweet and approachable of a character as the Big N has in its archives. His round features, cartoony-design, good nature, and aforementioned mustache make him feel natural both to gamers and non-gamers alike. A relic of an era where company mascots needed to be instantly marketable to children and adults alike, Mario’s non-intimidating, non-threatening, he’s not even remotely aggressive. He’s relaxed and jovial, no matter who’s behind the controls.

Unlike some of Nintendo’s other recognizable characters who fit neatly in one genre and are more niche (e.g. Link and Samus), Mario is recognizably normal. He’s not dressed to slay demon-kings or deliver justice to heinous space dragons, but he is dressed to appeal to everyone. His design, rather than feeding off the necessities of his games’ often-nonexistent plots, feeds into them. He has a universally-appealing design.

That flexible universality allows Mario to fit into a variety of adventures. From traditional platformers, to sports games, and even turn-based RPGs, Mario’s design allows him to fit nearly anywhere. Because Nintendo is, unlike with other series, willing to experiment with what Mario can and cannot do, he can run, jump, and hammer his way through nearly any obstacle. Such canonical flexibility allows Mario to serve in nearly any role. From baseball player to interdimensional savior, Mario’s been there and done it all.

This versatility, which some would call blandness, is actually Mario’s defining characteristic. By giving Mario this degree of built-in flexibility, Nintendo has given him the ability to transcend the very game of his inception. Unlike–say–Samus, who would look rather strange in a baseball or kart-racing game, Mario doesn’t have the baggage of a strong canon to stunt his outreach. 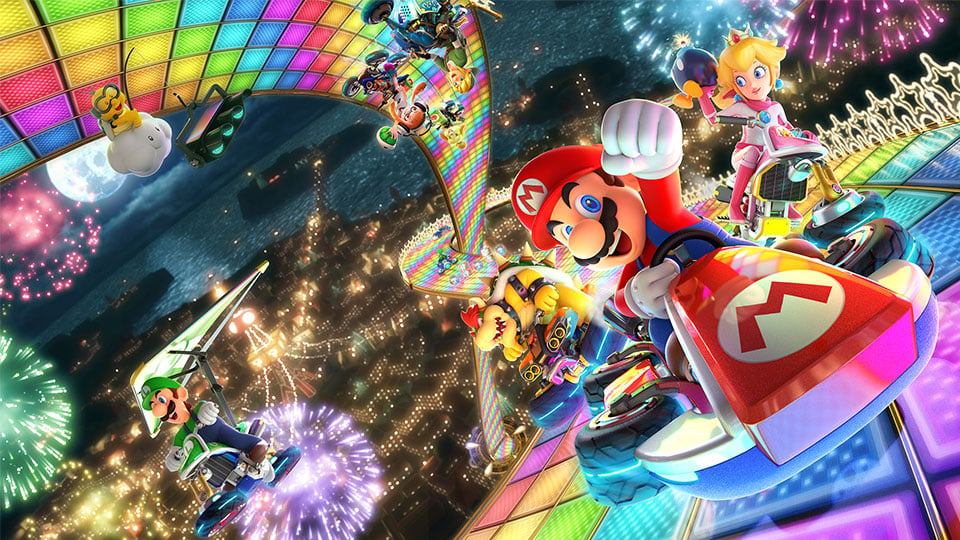 Mario is the most versatile character in Nintendo’s arsenal of IPs, appearing in genres as diverse as kart-racing and RPGs.

This variety manifests itself in the different gameplay mechanics that Mario games have used over the years. From a water-powered jetpack to a hat that can take control of his enemies, Mario’s games have never shied away from allowing Mario to break the mold set by previous adventures. Unlike other series, like The Legend of Zelda or Metroid, the Mario series is able to succeed because it can constantly break its own mold, and evolve naturally into some of gaming’s greatest adventures.

Nintendo’s iron-grip on the Super Mario IP since its disastrous deal with Philips in the 1990s has also helped. Absent the divisive games that other Nintendo series suffer from (e.g. Metroid: Other M and The Legend of Zelda: Skyward Sword), Mario has been able to pull off year-after-year of incredible main-series additions and serviceable spin-offs. There have been Mario games that fail to meet expectations or that, when compared to his better entries, don’t stack up, but there has almost never been a game that is truly terrible.

Mario is, perhaps, gaming’s most recognizable icon. A relic of the dynasty Nintendo built during the NES and SNES years, Mario represents the greatest limit of Nintendo’s achievement. The incredible mindshare which he holds among gamers and non-gamers alike represents not only Nintendo’s incredible reach, but also the cultural relevance that games can aspire to when they make an indelible mark on an entire industry. It’s every game developer’s dream for their protagonists to become as popular as Mario. However, given the incredible combination of factors which makes him popular, it’s unlikely that anyone will approach his level of super anytime soon.