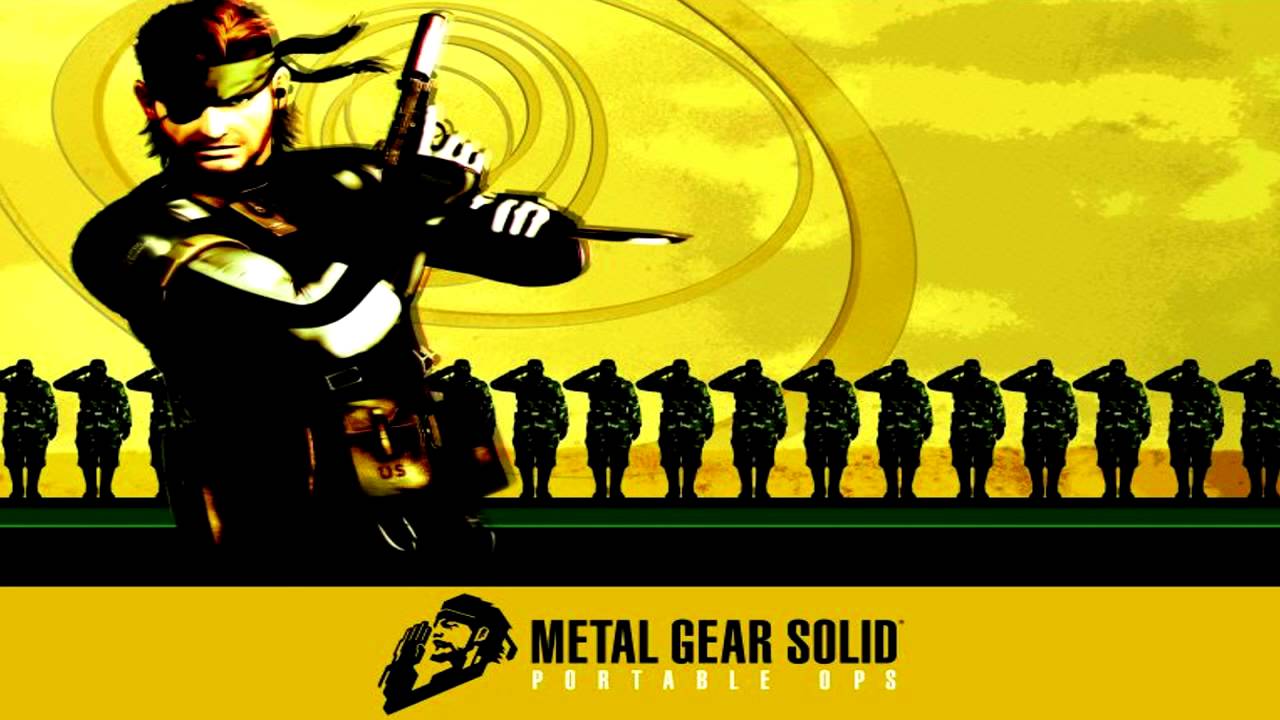 “Go forth, and find your own calling.”

What exactly is Metal Gear Solid: Portable Ops in relation to the rest of the series? It isn’t written or directed by Hideo Kojima, it isn’t a numbered title, and it’s alluded to as a semi-canon entry at best by Peace Walker. At the same time, however, Metal Gear Solid 4: Guns of the Patriots has an intimate connection with Portable Ops that often goes unnoticed under an analytical lens. Although many do so, discussing Metal Gear Solid 4 without taking Portable Ops into account ignores the fact that the PSP spin-off was anything but during its development. During the 2006 Tokyo Game Show, Kojima claimed, “If you change the Ops story, you have to change 4. If you change 4, it also becomes necessary to change Ops. Until Ops is finished, 4’s story can’t be finalized.” This emphasis given to Ops’ narrative in regard to Metal Gear Solid 4 is simply context that cannot, and should not, be ignored. It may not be written or directed by Hideo Kojima, it may not be a numbered title, and Peace Walker may disregard it, but it is undeniably an important piece of Metal Gear’s canon. Sadly, what it considers important marks an unfortunate shift for the franchise’s storytelling.

Prior to Portable Ops, each game in the series focused more on thematic exploration than pushing the narrative forward. Metal Gear Solid followed the events of Metal Gear and Metal Gear 2: Solid Snake, but it focused more on exploring the themes of genetics and legacy than it did on simply following Snake in his next adventure; Metal Gear Solid 2: Sons of Liberty disguised itself as a direct sequel to MGS before quickly breaking that notion down in favor of critiquing society while breaking down what it meant to be a sequel; and Metal Gear Solid 3: Snake Eater dropped all pretense of telling one continuous story by flashing back 45 years to chronicle Big Boss’ origin story and re-explore the series’ themes in a different context. Themes are so important to Metal Gear that Hideo Kojima even went so far as to attribute a keyword to each main game in the franchise: “Gene” for MGS, “Meme” for MGS2, and “Scene” for MGS3. The post-Ops games likewise feature keywords, such as “Sense” for Metal Gear Solid 4, but they suffer from the same problem Portable Ops does: the themes are secondary.

While the theme of inheritance does linger over the narrative, particularly in the second half, Portable Ops concerns itself more on continuing the story of Big Boss than it does on making any point about the nature of inheritance or succession. Although it makes sense to set a game after MGS3 to some degree, especially considering Snake Eater cuts off about thirty years before Big Boss’ death at the hands of his son, his story was nonetheless over thematically. Big Boss had killed his mentor, lost faith in his country, and inherited the title of “Boss” all with the promise of a life filled with eternal warfare. What happens next isn’t important. What matters is the fact that audiences now understand the man behind the codename. In fashioning Ops as a sequel to Metal Gear Solid 3, the story runs the risk of coming off as derivative; which is exactly what happens. Big Boss’ loyalty is put under scrutiny again, The Boss’ legacy is brought back into question, and Big Boss goes so far as to drop his inherited title in favor of his old codename. All this is done so Big Boss can have another outing. Ops’ excuse is that it’s telling the story of how Big Boss came to develop Outer Heaven while foreshadowing the identity of the Patriots so the reveal doesn’t come entirely out of nowhere in MGS4, but nothing in its story has weight. It doesn’t help that future games refuse to reference it, but even in its own context Portable Ops feels meaningless. Big Boss’ relationship with Campbell has no substance, Gene is a blander Liquid Snake, Gray Fox is shoehorned in with a backstory that contradicts his previous one, and the existence of Metal Gear RAXA completely devalues Otacon’s character arc in the first game. Out of everything Ops does, though, nothing is so blatantly reductive as Big Boss calling himself Naked Snake. In one fell swoop, everything Snake Eater built up to was dismantled for the sake of comfortability.

“The futures we saw were one and the same. Snake, you will destroy Metal Gear, and you will create a new Metal Gear in its place. Your children: Les Enfants Terribles. Snake, your son will bring the world to ruin. Your son will save the world.”

Portable Ops’ greatest tragedy isn’t that it strayed from what the series once considered important; it’s that it genuinely tried to find a place in Metal Gear’s narrative and failed. Underneath the story of Naked Snake becoming Big Boss yet again to establish Outer Heaven is a commentary on the nature of inheritance and succession. Big Boss is The Boss’ chosen successor; Gene is a super soldier created to inherit the prowess of The Boss; Big Boss inherits Gene’s resources and ideologies; and Elisa’s premonition is one inherently about succession. These two ideas link back perfectly into the franchise’s overarching theme of legacy, but they lack a proper reason for inclusion. Big Boss shouldn’t be inheriting anything from Gene because his desire to establish Outer Heaven was already solidified at the end of Snake Eater; Gene shouldn’t be modeled after The Boss because it means his character lives in the shadow of two of the series’ most important antagonists; and Elisa’s prophecy adds a mythological element that feels horribly out of place in Metal Gear. The series always relied on a little bit of mysticism as part of its charm, but Elisa goes too far. Previous games in the series said something with their themes. They sought to say something. Portable Ops’ themes don’t say anything. They don’t hold water. They exist because the other games had themes. That alone should disqualify it from securing a place in the Metal Gear saga, but, if that were the case, it would also apply to Peace Walker, Ground Zeroes, and The Phantom Pain.

These three games, while written and directed by Hideo Kojima, follow in the same footsteps as Portable Ops by prioritizing the continuation of Big Boss’ story with a loose focus on themes. Where Portable Ops gets excommunicated, though, Peace Walker and the Metal Gear Solid V duo get a free pass due to the air of legitimacy which Kojima’s presence gives them. Hideo Kojima is a fantastic director and writer, but Big Boss’ story was already told. The greatest storyteller in the world wouldn’t be able to make a continuation of Big Boss’ narrative feel natural because the greatest storyteller in the world would understand that there wasn’t any story left to tell. A good sequel could be made, but any approach would be at the expense of the already complete Snake Eater. In this regard, Portable Ops simultaneously does and doesn’t get the criticism it deserves. It does because it’s a sequel to a game that doesn’t need a sequel, but it doesn’t because the other sequels get off Scot free.

All this isn’t to say Metal Gear is suddenly a bad franchise after Portable Ops. There’s a lot to appreciate about Metal Gear Solid 4 from a narrative and thematic perspective, and Peace Walker and Metal Gear Solid V redefined the series’ gameplay in a way that felt appropriately fresh. Even Ops isn’t without its redeeming qualities. The story, while unnecessary, does improve in the second half while setting up MGS4’s narrative, and its themes do work in a bubble independent of the previous games. Really, the problem with Portable Ops is that it became a missing link despite being critically important in understanding the direction the series adopted with Guns of the Patriots. There isn’t some sudden shift after Snake Eater because Ops exists as a bridge. Whether or not it keeps the spirit of the series intact doesn’t matter, especially since the later games blatantly stray away from what made the series Metal Gear in the first place. What matters is that Portable Ops exists and deserves to be acknowledged, flaws and all.

Averting the Apocalypse In Style With ‘Omensight’: PAX East Impressions

‘Jelly Mario Bros’: An Absurd Slurring of the NES Classic