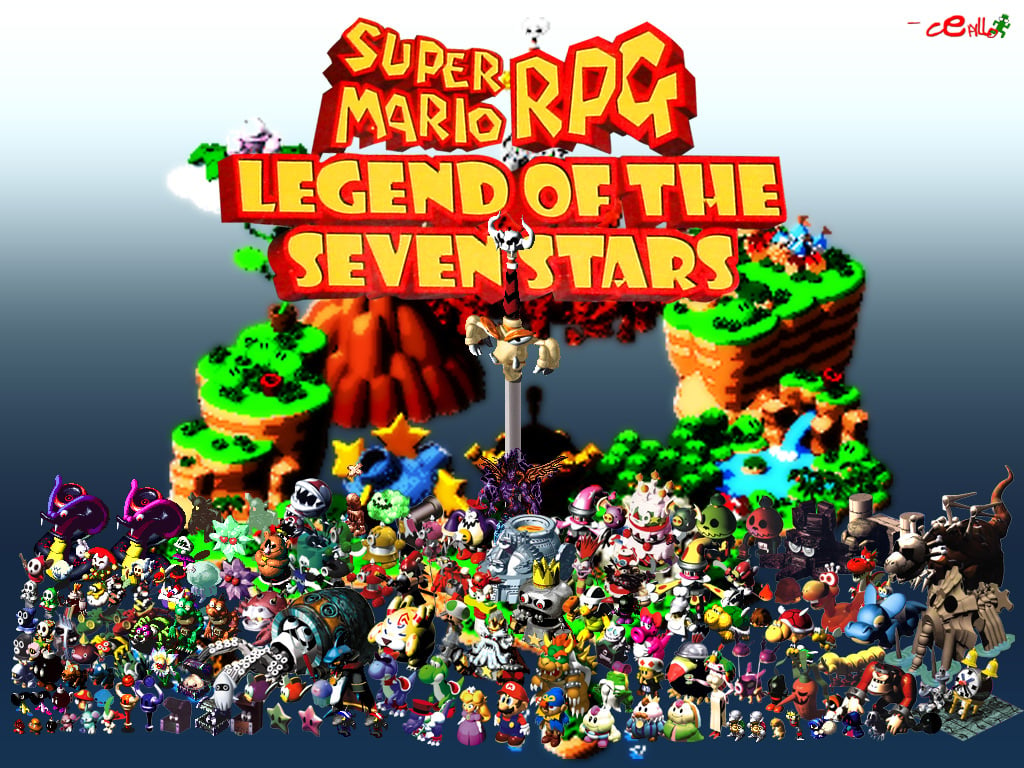 Chances are, if you are a fan of role playing games and have taken even a passing interest in the Mario universe over the past couple of decades, you probably have some degree of familiarity with Nintendo’s highly acclaimed Paper Mario series.

This niche franchise made its debut in North America with Paper Mario 64 in 2001 and has spawned various sequels over the years of varying reception. Of course, the now 15+ year period that Paper Mario has been around has not passed without intrigue – coming in the flavors of multiple developers, copyright issues and (most recently) controversial branding decisions.
From the history-making inception of the series itself, to the contentious path it has recently taken, Paper Mario on Paper aims to take you, the reader, on the wild rollercoaster ride that comprises the timeline of this charming franchise.

From 1-UP to Level-Up: The Royal Parentage of the Paper Mario Games

The Paper Mario franchise is considered by many to be a refreshing breakaway from the beaten path that is the traditional Mario platformer title. This spin-off series is the perfect foil to the standard-issue Mario game – placing our popular platforming plumber in an aesthetically charming RPG world saturated with witty, comedic dialogue and immersive (well, at least present) plotlines.

Lesser known perhaps, is the fact that the conceptual framework for the Paper Mario series was first laid out by one of the most revolutionary gems of the SNES – Super Mario RPG Legend of the Seven Stars.

Super Mario RPG was an experimental masterpiece that resulted from the collaboration of two game industry juggernauts of the time – Square and Nintendo. Both of these gaming monoliths had much to bring to the table: Square, largely thanks to the overwhelming success of their Final Fantasy games, was regarded as the industry expert in all things RPG, while Nintendo had already become a household name due to their iconic Mario IP. In theory, this alliance was a match made in gaming heaven – but what would a product resulting from the collaboration of these two superstar companies actually look like? Imagine a Nintendo themed sports car covered with Square decals, powered by a jointly created engine.

A Sword and a Horse? Try a Hammer and a Yoshi: Striking a Balance

Research shows that Super Mario RPG could have gone in a few drastically different stylistic directions. In a revealing Iwata Asks interview in 2012, Kensuke Tanabe (writer for Super Mario RPG) states that during the first meeting, Square pitched a conceptual image of Mario. In the spirit of a Final Fantasy-esque protagonist, the image portrayed a cape-wearing Mario on horseback wielding a sword.

This probably raised a few eyebrows.

Including producer Shigeru Miyamoto’s – who rejected the concept, and, in what Tanabe called Miyamoto’s “only specific request”, suggested that Mario have a hammer instead. Other Final Fantasy influenced ideas did not make the cut either, such as a top-down world map. In the end, the decision was made to build upon the Mario universe while keeping signs of external influences to a minimum.

Putting the “RP” in a Mario RPG: A Legacy of Revolutionary Concepts

Stylistic decisions weren’t the only balancing act performed during the production of the game – the team had the difficult task of striking the proper finesse between both RPG and Platformer genres. Branding confusion was a real risk because of the potential that Mario fans had not yet been exposed to RPG’s, much less unprecedented RPG elements in a Mario game. A bridge between the two genres was needed, and that bridge appeared in the form of what director Chihiro Fujioko called “action events”. Action events gave the RPG player platformer-inspired control over their character during times in which they would traditionally have little to no control, such as cut scenes or turn-based battles. Here is an excerpt of an interview with director Yoshihiko Maekawa, in which he recalls the inspiration for action events (also known as action commands):

“…That [action event concept] was very much inspired by a children’s toy that was available in Japan at the time. It was like a large laptop with these buttons that would play music. You had to press the buttons with good timing to the music. It was that idea, having gameplay built around timing button presses, that inspired me to hybridize these two genres of game, to get a little bit of action and RPG into the same game.”

Super Mario RPG’s contribution to the RPG world in the form of action events cannot be overstated. The concept was so well received by gamers that it is a staple in mainstream RPG’s to this day.

Another concept pioneered by the game was the addition of dialogue – providing an element of depth never before seen in the Mario universe. With Nintendo’s unprecedented shifting of the storyline closer to the foreground, players were able to see a splash of color and detail blended into the traditionally bland, minimalist canvass comprising Mario’s world. This creative breath of life helped fulfill a desire for detail and flavor text that, for many fans, had not been quenched by playing spinoff games such as Hotel Mario or Mario’s Time Machine. There is simply something endearing about a Toad saying more than “BUT OUR PRINCESS IS IN ANOTHER CASTLE!” or a Goomba – traditionally just stomping fodder – verbally expressing vulnerability and fear towards Bowser. Fleshing out once mundane, static characters into characters that interact in a comical and comparatively immersive world created a whole new reason to value and enjoy a Mario game. 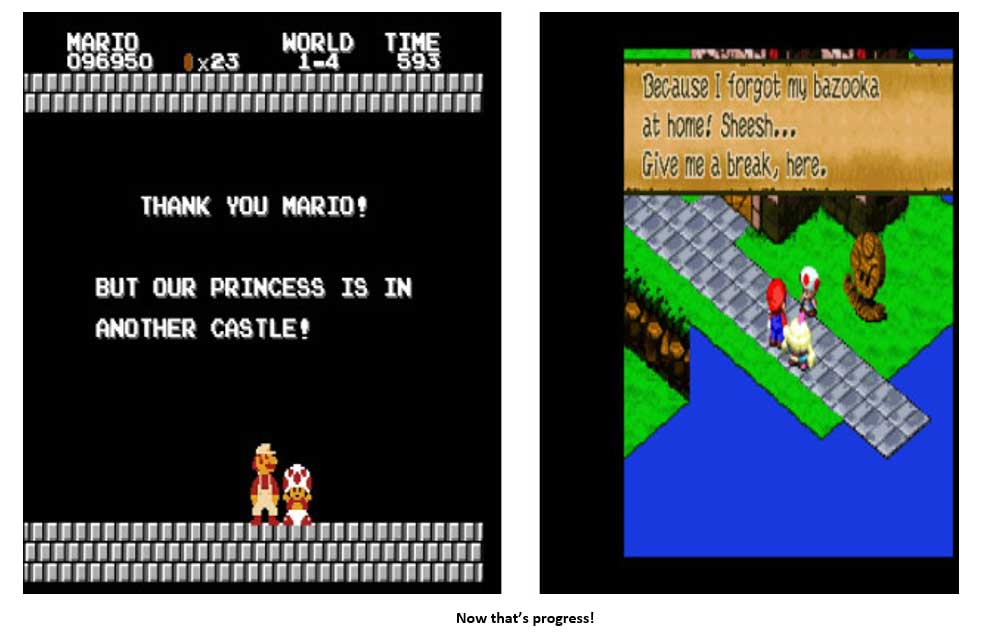 Considering all of this bundled-up awesomeness, one would naturally expect the game to sell like sweet, steamy hotcakes. If only that were actually the case.

Too Late or Too Soon? Theories Why Mario RPG Didn’t Win the West 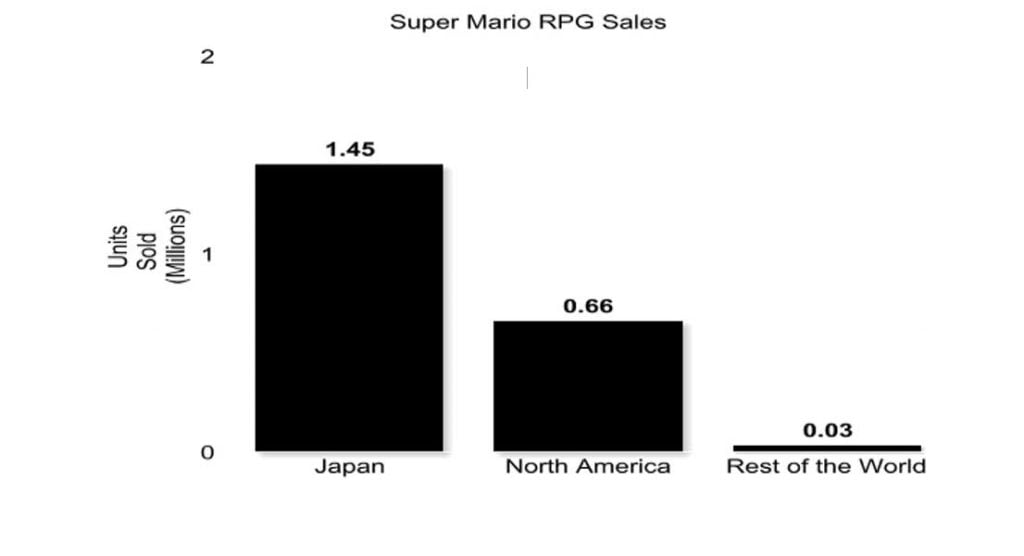 As you can see, this chart made from VGchartz data indicates that Super Mario RPG barely made a dent in the North American market – especially when compared to how much the last AAA Mario title, Yoshi’s Island (1995), raked in.

So, why did this happen?

Well, it was definitely not due to a lack of quality – Super Mario RPG was highly rated in the States and is firmly entrenched in many top 10 and top 25 SNES game lists. The game was also a graphics powerhouse thanks to the expensive Rareware technology Square used in its development. 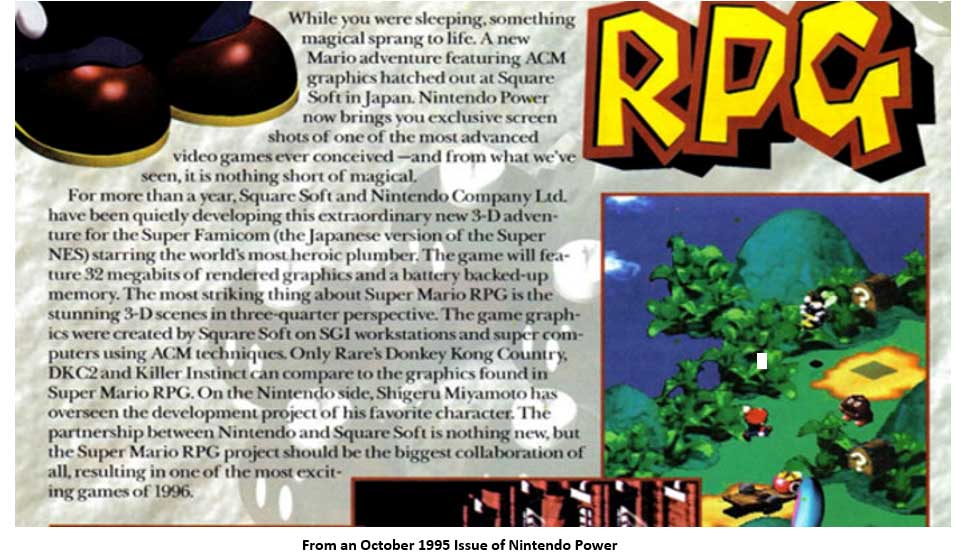 Here are a couple of theories – steeped in conjecture – that could explain the lackluster Western sales of this genre-defining masterpiece:

There is certainly a possibility that the release of Super Mario RPG Legend of the Seven Stars so late to the SNES’s life cycle hampered its visibility and thus stunted sales. Some facts:

• Super Mario RPG was released for the NA region on May 13th 1996, and it happened to be one of the only AAA titles – along with Donkey Kong Country 3: Dixie Kong’s Double Trouble! – released so late in the SNES console cycle. Both games did relatively poorly as AAA titles.

• The game’s debut into the 16-bit generation was quickly overshadowed by the dawn of the 64-bit generation: The Nintendo 64 came out in Japan in June ‘96, and hit US shelves later that September.

• The N64 was not backwards compatible.

Looking back on the Western gaming climate during the time period of Super Mario RPG, there are indications that the West had not yet developed an appetite for RPG gaming. Future titles, such as Final Fantasy VII (1997) and the first generation of Pokemon games (1998) generally take the credit for acquainting Western markets with the RPG genre en-masse. Perhaps Super Mario RPG was a game before its time, the unsung hero sacrificed to pave the way for the snowballing Western interest in role playing that occurred thereafter.

A Foundation for the Future: Closing Thoughts

Setting the creation of precedents and gold standards aside, the creative risks taken in Super Mario RPG not only provided the Mario world the depth it needed, but also blazed a trail for future Mario RPG descendants – the Paper Mario series and Mario & Luigi series – both of which will be discussed in upcoming articles of ‘Paper Mario’ on Paper.