It isn’t often that games directly address the topic of sex, and even less frequently that they address it with a great deal of thoughtfulness or maturity. There are certainly some exceptions, such as cult Atlus favorite Catherine or largely unknown indie tale Cibele, and some that straddle the line a bit by being lighthearted but real-feeling, such as Emma Kidwell’s Well This is Awkward, but One Night Stand is one of the best representations of the maturation of sex in games to date.

From indie studio Kinmoku, the one-woman show of Lucy Blundell, One Night Stand attempts to take an honest look at a sexual encounter, unburdened by the usual tiresome trappings of oversexualization and hyperbole. 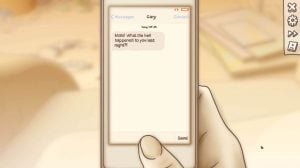 Gary is interested in your situation, but how much are you willing to divulge?

One Night Stand is something of a visual novel, and thus explores its questions of sex and human relationships from the standpoint of a short story with branching options. You wake up in bed with a woman in a strange apartment, apparently having gotten so drunk the evening prior that you can’t remember what happened. Who is she? Where did you go? What did you do? The formula is fun and mildly stressful: you only have so much time to try putting the pieces together, and you’ll never quite know which actions you take will bring about what results. Some actions are more honest than others (you can choose to rifle through some of the woman’s more personal things when she’s not looking, sift through your own discarded items, or even reveal choice bits of information to a friend of yours via your phone), and the combination of things you choose to say, look at, and do will ultimately bring you to one of the game’s 12 endings.

It’s a simple formula that works. The game itself is very short, originally being a creation for a game jam, but encourages experimentation in multiple playthroughs given its numerous endings. Many of these are permutations on a few different themes, but it’s a lot of fun trying to find the paths that lead to them, especially given that the game’s strong sense of character makes getting the more positive ones feel important. 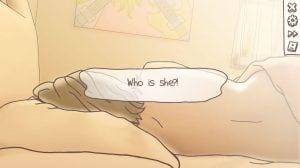 One of many questions.

Not much can be said about the game as a whole without spoiling the bulk of what makes one’s time with it fun and surprising, but there’s no question that it looks the part. It sports a visual style somewhere between traditional animation and rotoscoping, and this lends it a wonderfully unique atmosphere. Combined with a minimalistic soundscape that features soft music and the occasional sound effect (no voice acting), One Night Stand lands in a sweet spot, leaving something to the imagination while immediately distinguishing itself from most other titles.

It’s hard to find anything not to recommend, here. The game’s brevity may turn some people off, but it only costs $3 at full price, and the experience is rather unlike anything else you’re likely to play. It has an ingenious blend of honesty, sweetness, and awkwardness that makes it a joy to explore, and it’s easy to care about its two characters due to the intelligent script. The protagonist is largely a stand-in for the player, but still injects some of his own personality as things play out, and the female lead reacts consistently to his choices in addition to offering her own thoughts, subtly and warmly encouraging the player to do their best to get to know her as a more complete human being—unless they make her angry, of course. 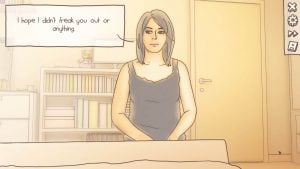 “Awkward” is the order of the day, but there’s more than just awkwardness beneath the surface.

Ultimately the game’s biggest strength is the fact that it manages to broach a sexual topic in a real and occasionally humorous way without being lewd or pandering. It’s less about sex than it is about the social awkwardness of being human, and its gentle, thoughtful approach makes it a breath of fresh air.