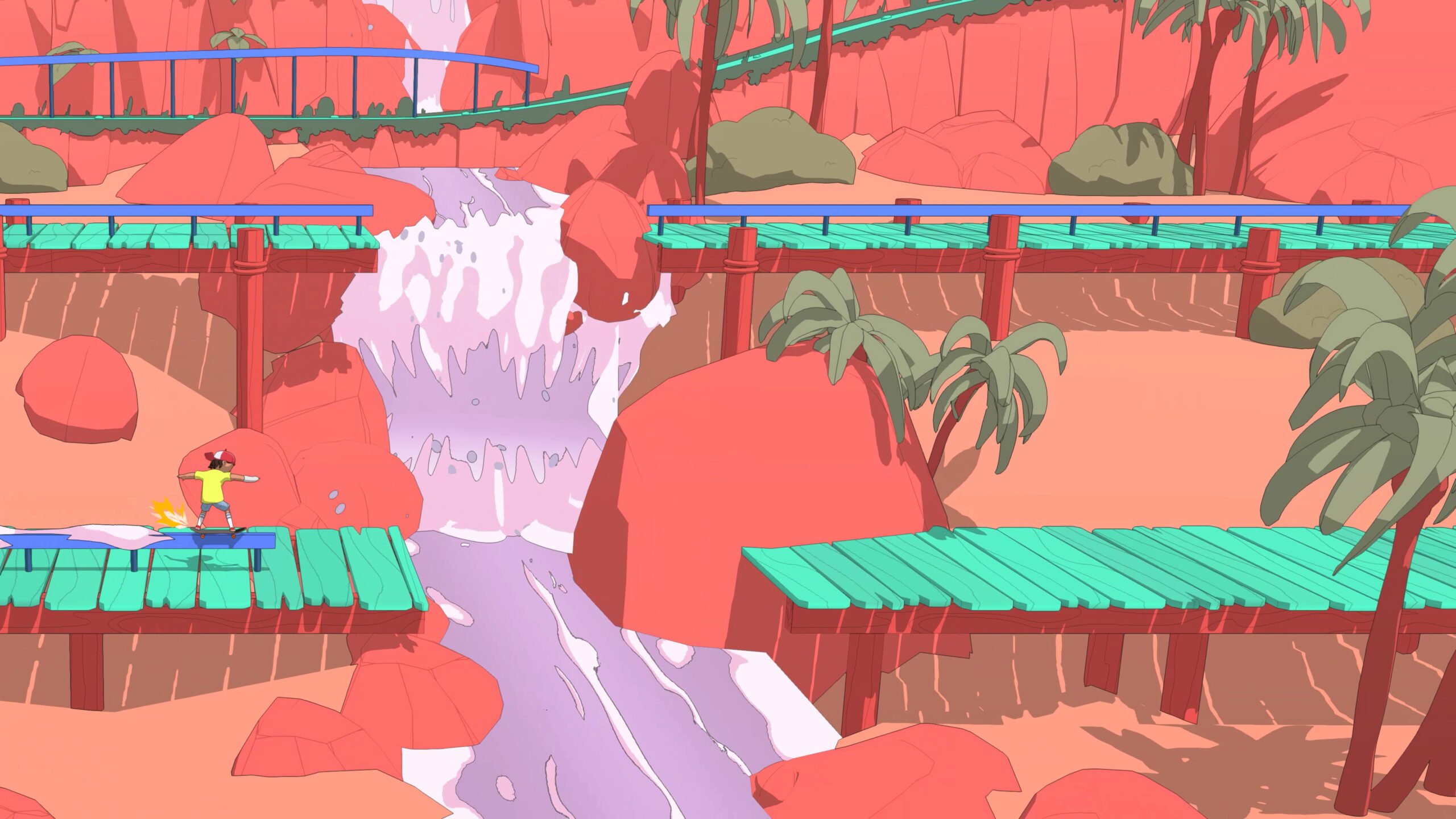 OlliOlli World is fun, pretty, and hard-as-heck, and if you’re up for it, Radlandia is calling you to Gnarvana. Both welcoming to newcomers and a welcome evolution for old school enthusiasts, OlliOlli World is a radical skateboarding triumph for Roll7.

OlliOlli World is a side-scrolling skateboard game in which you travel through the mythic and wondrous world, Radlandia, in order to become the best little skateboarder you can be. OlliOlli World is the third entry in the OlliOlli skateboarding canon, but the first to feature a colorful and surreal Cartoon Network-style aesthetic and world. The first two games made names for themselves largely due to their excellent feel, and OlliOlli World builds upon this addictive set of systems and wonderfully deepens the world around them with only a few minor issues.

Like all great ‘boarding games throughout video game history, the core of OlliOlli is its trick system. It’s all about stringing together as many grinds and kick flips as you can before landing triumphantly or falling on your face. Any trick-based game lives and dies based on how good it feels, and while the first two OlliOlli’s felt great, OlliOlli World is the series best. The tricks are fast and the controls are responsive, and when you’re soaring through a level at top speed stringing together grinds and flips, you’ll feel like a hero. OlliOlli World‘s gameplay simply flows.

A big piece of OlliOlli’s hook is skating across a side-scrolling world. So if you were raised on the Tony Hawk series (or the real world), you might miss the ability to skate and combo wherever you feel. If you can let go of that Hawk-ish bias, this limitation is OlliOlli’s greatest strength. Skating across a largely singular plane, you can focus on just putting tricks together in a way that can feel transcendent when you’re really hitting all your grinds and flips.

Same Feel With Some New Tricks

If you’ve played and loved previous OlliOlli titles, you can stop right here and go get this one, as you’ll be right at home in Radlandia. In addition to the style overhaul, new additions to the core gameplay include the aforementioned branching paths as well as air grabs and wall rides. The grabs work well and help build amazing new combos. Branching paths and wall rides are both most welcome, though they do feel slightly less tuned than the rest of the experience (understandable, as Roll7 has had nearly a decade to perfect the rest).

In general, the new maps are awesome in both the celebratory and literal senses. They’re large, fun to explore, and look wonderful. And having multiple pathways, some more grueling than others, is very entertaining for replayability’s sake. That said, there are moments in the game where simply making the switch is a bit jarring to your flow. Moreover, there are spots on tracks where the changes or which track you’re on aren’t well telegraphed, and you won’t be sure whether you’re about to land on a cliff or crash into a giant gem. These confusions fade with multiple playthroughs, but it can be a bit of a bummer early on.

Similarly, wall-rides are an exciting and interesting new aspect of the gameplay, but they are occasionally frustrating, particularly early on. Really, OlliOlli World is a victim of its own success at feeling so darned rad. Since everything else feels so tight,  the controls for wall rides can feel a bit loose, requiring a higher degree of twitchy momentum mastery than an average player or newcomer might have early on. In a way, it pushes the player to get used to handling speed, and once it clicks in, it’s generally a welcome method for catching more air. But the volume of wall rides that are required to get through most tracks doesn’t feel particularly well-balanced.

Fun For Newbs But Still A Wondrous Grind

Thankfully, they’ve also added a most-welcome quick-restart system. And while any self-respecting skate fiend will eventually want to finish every level with no restarts, being able to drop right back in at a checkpoint is essential to mastering the countless excellent maps that Roll7 has crafted.

The forgiving checkpoint system holds hands with many features that make OlliOlli World the most welcoming of the series to newcomers. If you already know what you’re doing, none of the tricks or styles are gated, but the carefully laid out maps and side quests introduce new systems and tricks gradually. The skill ceiling is as high as ever (actually it’s higher), and once you’ve mastered the manual in a surprisingly late-game tutorial, you’ll find yourself wanting to play through all the levels again.

And what a world to play through. While the core tricks systems feel mostly familiar, the world of Radlandia is completely new to the series, and is an amusement park of colorful joys. Drawing clear inspiration from the mind of Pendleton Ward (Adventure Time), Radlandia pays homage to Ooo with its surreal landscapes and talking frogs. It’s all genuinely entertaining to both look at and skate through, and has a simple but engaging story and charmingly wonky characters to experience.

On top of all of its innate appeal is a wonderful sense of addictive customization. High scores unlock rad gear that can make you as cool or weird as you want. Stick an ice cream cone on your head, match your fly coat with your slick hat, or reach for the coveted space alien suit. It’s all reminiscent of the cool of Splatoon and leans in to crafting a vibe that is all its own.

Despite a few minor hiccups in early gameplay, all of its changes are welcomed and Roll7 must be celebrated with an endless parade of high fives for creating the raddest skateboarding video game of this console generation. At its heart, OlliOlli World is pure fun, and a mystical and magical love letter to skateboarding and the infectious culture that surrounds it.