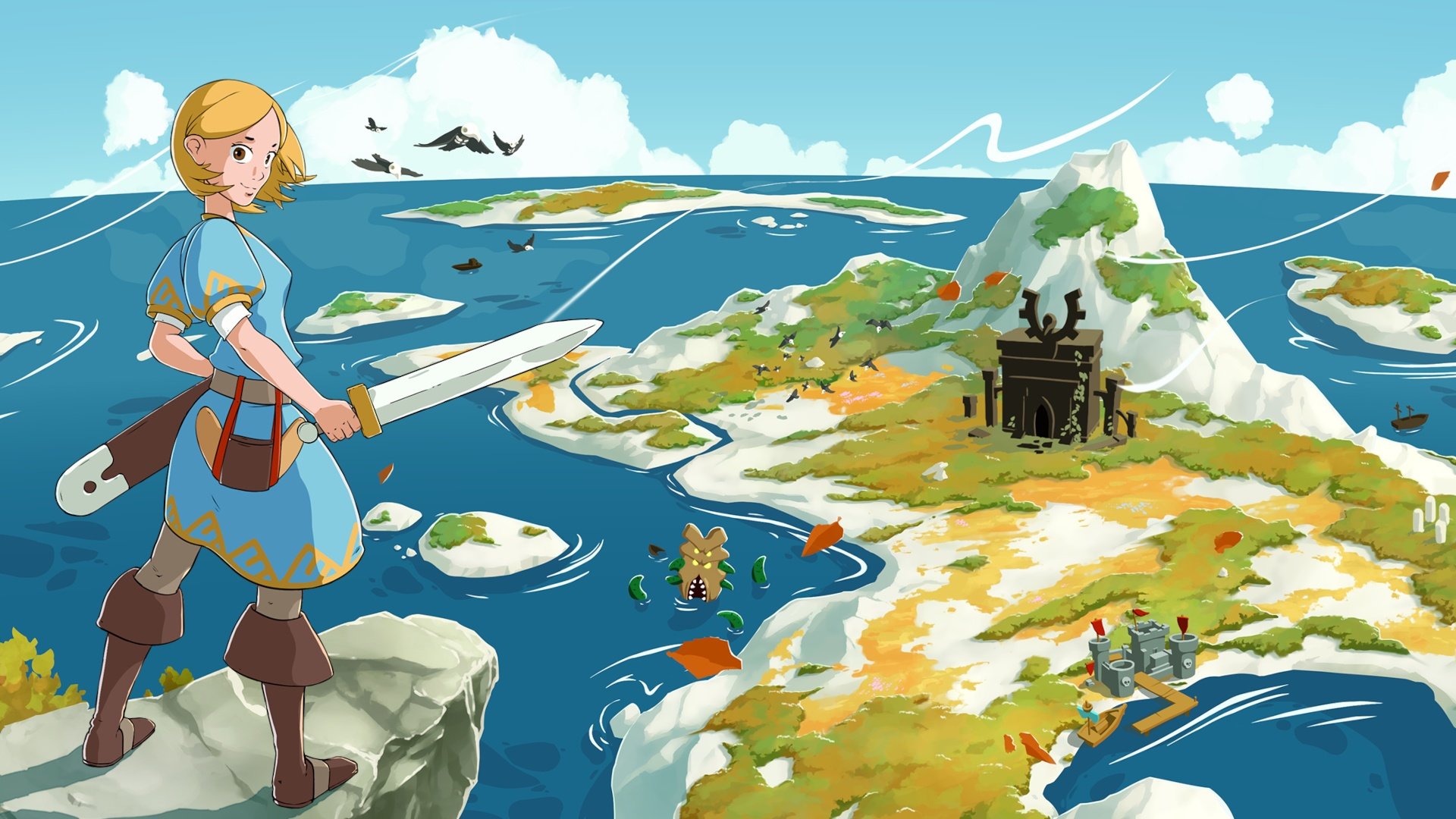 It is a bold move to crib from the best of the best. Ocean’s Heart isn’t shy about what it wants to be: a successor to 2D Zelda games. As an action role-playing game that feels familiar even as it makes its own choices, Ocean’s Heart wears its influences proudly. Lone developer Max Mraz’s indie title is a textbook example of a game designer paying proper homage to a series that impacted them greatly. Thoroughly charming, Ocean’s Heart may just fill the Link’s Awakening-sized hole in the heart of every Zelda-starved gamer.

It is impossible to talk about Ocean’s Heart without comparing it to various Zelda titles. The game’s solo developer, Max Mraz, has been clear from the start of development that he was trying to scratch a very particular itch. Inviting direct comparisons to what is arguably the most enduring series of all time could have been a disaster, but Ocean’s Heart succeeds as very much its own thing.

Ocean’s Heart, like Link’s Awakening or The Wind Waker, is set in a waterlogged world. On Outset Island- sorry, Limestone Island- player character Tilia lives a quiet life with her father and sister, doing her best to help run the family tavern. But her idyllic existence is shattered when pirates raid the island in search of a mysterious artifact. Tilia’s best friend Hazel is kidnapped in the chaos, and Tilia’s father, a member of the volunteer navy, sets off in pursuit of the pirates, promising to return soon. Smash cut to six months later, when Tilia decides to find where her father went and just what those pirates have been up to.

It’s a harrowing beginning, but the tone of Ocean’s Heart is more lighthearted fable than Grimm’s fairy tale. As Tilia leaves her home and explores the surrounding islands on her quest, she’ll battle enemies and attempt to tease out what the villainous Blackbeard is plotting. The characters, towns, and side quests are all bursting with personality, and are a highlight of this breezy adventure.

Structurally, Ocean’s Heart gives the player two main objectives at the beginning and lets them figure out how they want to reach their goal. Eventually, those two main goals dovetail together but along the way, players have plenty of opportunities to carve out their own adventure. Traveling from town to town means passing through dangerous areas packed with different enemies, from trolls to hornets and everything in between, including similar-to-but-legally-distinct-from takes on Leevers and Keese. Combat will be recognizable to anyone who has played A Link to the Past, either of Capcom’s Oracle entries in the Zelda series, or any other 2D Zelda. Tilia swings a sword and uses various tools like bombs and arrows to defeat her foes and solve simple puzzles. But while the action may look the same, its implementation has a few welcome modern touches.

Take magic spells. In Zelda games, Link will often have a magic meter that depletes as he casts spells or uses his magic rod. Often, the magic runs out without an easy way to refill the meter. In this game, Tilia’s magic meter is available from the start and refills itself automatically, if a little slowly. This small design feature encourages players to use what the spells they find, frequently, and without repercussions. In another change from 2D Zelda titles, Tilia lacks a shield. Instead, she has a forward roll that propels her out of harms way. This makes combat feel a little more dynamic than just standing and slashing, and even if most battles don’t necessitate the roll, the move feels great and makes traversal more fun.

While these changes are welcome, there are a few bobbles in the design Ocean’s Heart. Players cannot heal while exploring without entering the pause menu and using consumables. This is hardly a deal-breaker, but it does disrupt momentum as some later enemies can take off several hearts with a single strike. Some might wish there was a dedicated button for healing consumables or even hearts in pots. Having to stop and swap tools is occasionally frustrating; Tilia can only wield her sword and two additional items at a time, a throwback design choice to 2D Zelda games that might have been better left in the past. Players may end up spending a little more time in the pause menu than they might expect.

An interesting issue is that after a certain point, the stakes of combat in Ocean’s Heart evaporate completely. If players are thorough explorers, their inventory will be packed with berries, apples, and bread that can completely heal them. There is even a powerful elixir that functions as a fairy, reviving Tilia if she ever falls in battle. This elixir is craftable, components are plentiful, and there doesn’t seem to be a limit on the amount a player can carry. There is nothing inherently wrong about a low-stakes adventure, but for how epic the final few confrontations are, the near-limitless healing takes a little wind out of the sails.

That said, upgrading Tilia’s toolkit and crafting different potions and healing items feels very satisfying. Ocean’s Heart is a game that rewards players for poking into every nook and cranny of the map. If players take the time to comb every location they enter, they can’t help but be rewarded for doing so. Several items in Tilia’s arsenal can be upgraded. Her basic sword and bow are improved by giving Coral Ore and a few coins to any local blacksmith, and her defense can be increased by upgrading her armor through completing side quests and careful shopping. Tilia’s most powerful ability, a thunderbolt spell, can be improved by finding and defeating powerful monsters in hidden areas, a great incentive to explore as much as possible. In fact, exploration is the most satisfying aspect of Ocean’s Heart, especially after combat becomes trivial.

The way quests are laid out is simple and clean, with main quests in one tab of the pause menu and side quests on another. But there are also quests that the player must find and complete by intuition alone. A side character may idly mention a rumor they heard about a legendary weapon in a far off-location, or the player may stumble into a mysterious unlit lighthouse and learn that igniting its flame has great significance. At every turn, NPCs notice Tilia’s volunteer navy uniform and ask for her aid.

The variety displayed in quests is impressive; some are simple fetch quests and some are combat-oriented. One even strips Tilia of most of her equipment and dumps her in a location completely separate from anywhere near the main questline, forcing her to solve a mystery and find all her stuff before she can return to the main mission. Even if the rewards themselves are often lackluster, completing the surprising amount of side quests rarely feels dull.

Completing Ocean’s Heart is a near-frictionless experience. It goes down smoothly, despite a handful of Switch-related technical issues (nothing a hard reset cannot fix). There is even a little lampshading regarding this game’s influences. For a bite-sized Zeldalike, Ocean’s Heart completely nails what it sets out to do.

The aesthetics of Ocean’s Heart are gorgeous, and the entire package shines with humor and earnestness. Hardcore players might want a little more danger, but for casual fans who are anxious for another 2D adventure effort from Nintendo, Ocean’s Heart easily fits the bill. The fact that this project is a solo effort is commendable and speaks highly of whatever this developer decides to tackle next.