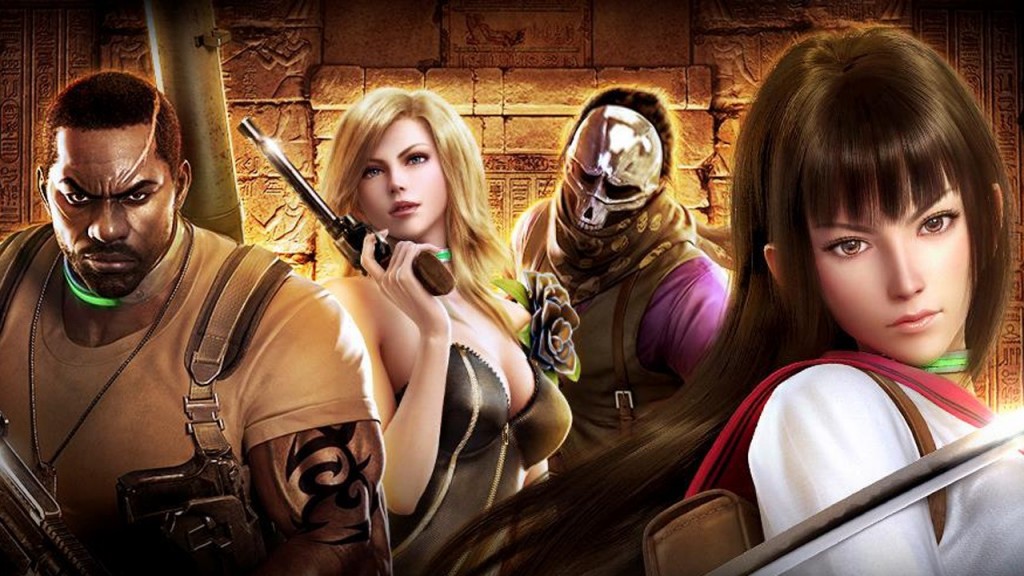 This week, Namco-Bandai finally released the beta for the free-to-play title Lost Reavers on the Nintendo eShop, giving players their first look at the upcoming zombie shooter. Unfortunately, this early showing has not been all that positive, as the test run reveals a number of the game’s weaknesses in a variety of areas, giving Bandai a lot of work if they want to fix it before the title’s release on April 28th. That being said, this first look reflects the gameplay of the beta only and is in no way a  concrete representation of how the full game will come out, although a number of the title’s issues may be too large to solve before its final distribution.

Formerly known as Project Treasure, Lost Reavers focuses on cooperation between players, trying to effectively use the Nintendo Network while encouraging player support and teamwork. The story so far is incredibly vague, revolving around a time traveling A-team tasked with finding power sources known as Relics. The four playable characters are relatively diverse, but also slightly cliché, with the typical samurai sword-wielding schoolgirl, the demolitions and weapons expert, the melee “psychopath,” and the ranged Bayonetta-esque seductress rounding out the squad. As a whole, the Reavers beta omits single player completely, as appears to be the case with the full game as well, forcing players to pair up with others in co-op lobbies. Teammates are tasked with defeated enemies, looting items, and progressing through the various rooms of the dungeons is by standing together on the same “safe spot.” The actual gameplay feels very similar to the Resident Evil games of the past, as the third-person, over-the-shoulder shooting and melee combat against zombies borrows heavily from the Capcom franchise. 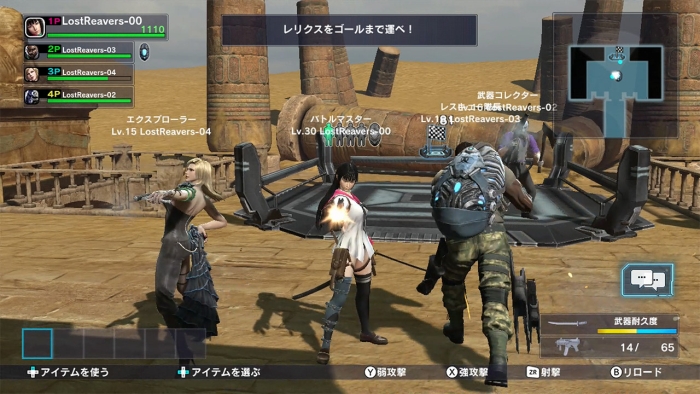 No “buts” about it, the game places a huge emphasis on grinding, forcing players to continually plunge through different variations of the same levels in order to gain money and resources, unlock new items, level up characters, and gain new skills. This style of game certainly appeals to a specific and unique type of player, as most will get bored of the constant repetition. Shooting the same types of enemies, seeing the same scenery, and grabbing the same type of treasure through every playthrough becomes a bit of a chore after players become familiar with the controls, although the full version of the game could include much more level variation and a bigger picture. In Lost Reavers’ defense, the dungeons’ difficulty level actually gets quite challenging as the game progresses, and really does create some great teamwork moments when the right group of players is assembled.

Unfortunately, finding this perfect group of teammates is actually pretty hard to do. The whole “creating a lobby” type of matchmaking feels incredibly outdated and cumbersome, making it difficult to find the right team. Nintendo has proved with Splatoon that great matchmaking is possible on their console, and it is hard to believe that Namco-Bandai actually opted for the alternative style. In 2016, developers should at least provide the option to “randomly match-make” with other available players, leaving the “lobby” selection only to those who want to privately play with friends.

Even when players find great sessions, the broken communication elements make it hard to have proper interactions between teammates. Simply put, the game would be 100 percent better with voice audio. Nintendo players have been calling for vocal communication since the release of the Wii a decade ago, but Nintendo has not delivered, for a variety of reasons that do not pertain to this article. To make up for the lack of voice audio, Lost Reavers gives a variety of pre-selected commands that can be chosen by players, but these are not indicated by any sound or tone to gain the attention of others, thus making them sometimes go unnoticed during intense action. 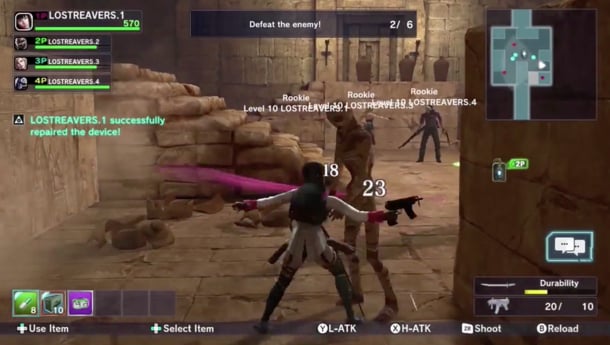 Furthermore, the interactions between teammates have the possibility to go south, and Namco-Bandai offers no kick feature to boot players who are not cooperating. In a number of matches, I experienced a few teammates who either were dropped from play or just put down their controller, leaving the rest of the squad stuck waiting for the person to enter the safe zone so we could progress. After a few agonizing minutes of waiting, I left the match and received nothing for my playtime. Also, some “prankster” teammates revel in having the squad at their mercy, running around aimlessly while everyone else is forced to wait for them. Having a party leader and a boot feature would eliminate these issues entirely, although admittedly it could be grossly abused.

As a whole, despite a few glaring issues, the Lost Reavers beta really does work in fitting the free-to-play model. It has an escalating difficulty that centers on grinding, and presumably in-game purchases will give a quicker progression or rare items to those willing to pay money to avoid a huge time investment. Because of this, the title really sets its sights on a unique and niche group of players who do not mind the repetitive gameplay as long as it promises awesome rewards in the end, hoping that they will take the title and micro-transactions hook, line, and sinker in order to maximize profits. As far as communication goes, the game still works with the elements that it has, but could be vastly improved by the inclusion of voice audio, although with Nintendo that seems unlikely. For most, the problems with other players could be a major turn off, especially because entire squads could be held back or completely stopped by a single worthless player, which are similar worries to those being had about the upcoming multiplayer game Metroid Prime: Federation Force. While the Lost Reavers beta is not perfect, it is still free-to-play, giving Wii U owners no excuse to not pick it up and give it a try. As the beta is still said to be a work in progress, it will be interesting to see what features get added in the future and how the in-game purchases will work, leaving plenty of surprises for its April 28th launch date.