For a certain kind of gamer, the premise of Little Dragons Café is a dream. It’s soothing aesthetic, simple gameplay, and lack of difficulty make for a relaxing adventure. There’s no dangerous combat, no failed state, and no stress. And to top it off, Yasuhiro Wada, the director of the classic series Harvest Moon, is at the director’s helm once more. For players who enjoy this kind of tranquil experience, there’s little more you could ask for.

It’s unfortunate then that it’s too hollow for even the niche it aims for.

The story is endearingly simple, as two twins must learn to run their family’s café after their mother falls ill. In order to heal their mother, they’re given an egg by a mysterious old man and instructed to take care of the dragon within. It isn’t long before the café is filled with charming and surprisingly dimensional characters. Various customers come and go as the story progresses, each with their own mini narrative that are generally delightful and fun to watch.

The gameplay is split into two main gameplay styles: café managing and wilderness exploring. The former lacks any meaningful progression, decisions, or input from the player in general. The main character oversees the café by performing basic tasks such as setting the menu, cleaning plates, taking orders, and occasionally berating coworkers for slacking on the job. These simple “walk and press a button” commands repeat like clockwork throughout the game. They aren’t mandatory, but not doing them makes the game even less engaging that it already is. The player-selected restaurant menu doesn’t matter much as well; if there are enough ingredients in stock, costumers will eat whatever is offered. The player must cook the dish once with a simple rhythm game before adding it to the menu and can disengage with it afterwards by telling their chef to handle it from there. 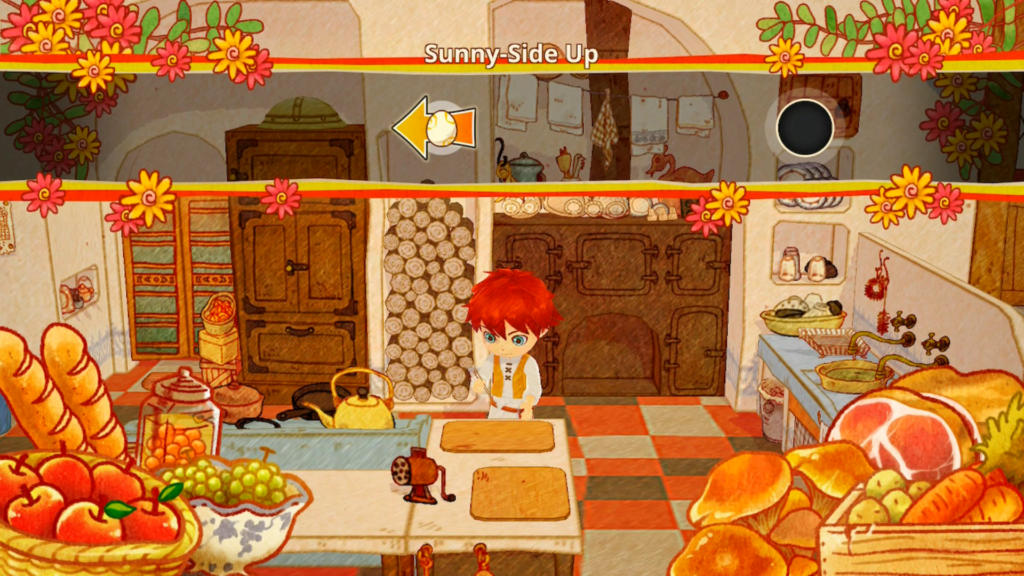 Believe it or not, that’s a prompt to press the “Y” button.

Searching for ingredients in the open world is more engaging, if only slightly so. While outside, the player is charged with collecting and growing the ingredients they need to keep the restaurant fully stocked. This too, however, is a chore. Growing ingredients amounts to a single button press every few days to acquire a huge amount of ingredients. There’s no planting, no organizing, and no maintaining; it’s just wait and harvest.

The foraging in the wilds offers a small amount of basic exploration and progression, as your dragon will grow and learn new talents as your café’s reputation increases. This will open up new areas to explore, but it still only offers basic obstacles that are easily surpassed with single button presses. The 400 recipe fragments that are scattered about aren’t hidden behind puzzles or minigames but laying discarded randomly around the world. Sometimes they appear in places that have already been surveyed, which adds another slice of monotony and repetition that requires the re-exploration of areas.

This level of repetitive tedium is not new to fans of Harvest Moon, but those games offer a feeling of progression. Harvest Moon and Stardew Valley are enjoyable because players can work hard and strategize to achieve their own self-driven long-term goals. Planning, daily maintenance, and diligence let the player expand and customize the experience how they want. It feels satisfying to use the money earned over the course of months to buy a house expansion.

Little Dragons Café’s huge downfall is how it abandons such self-motivating goals in favor of playing out a linear story. The only measure of success is reputation, and the only reward for reputation is unlocking the next section of the story. It’s not motivating when prizes like larger cafes and new recipes are given as part of the story, with no way to prioritize or customize. There isn’t even a currency system or café customization in Little Dragons Café, which makes it hard to find the will to keep running the restaurant through its repetition. And with the game’s length as substantial as it is, this lack of engagement hurts the longer it’s played. 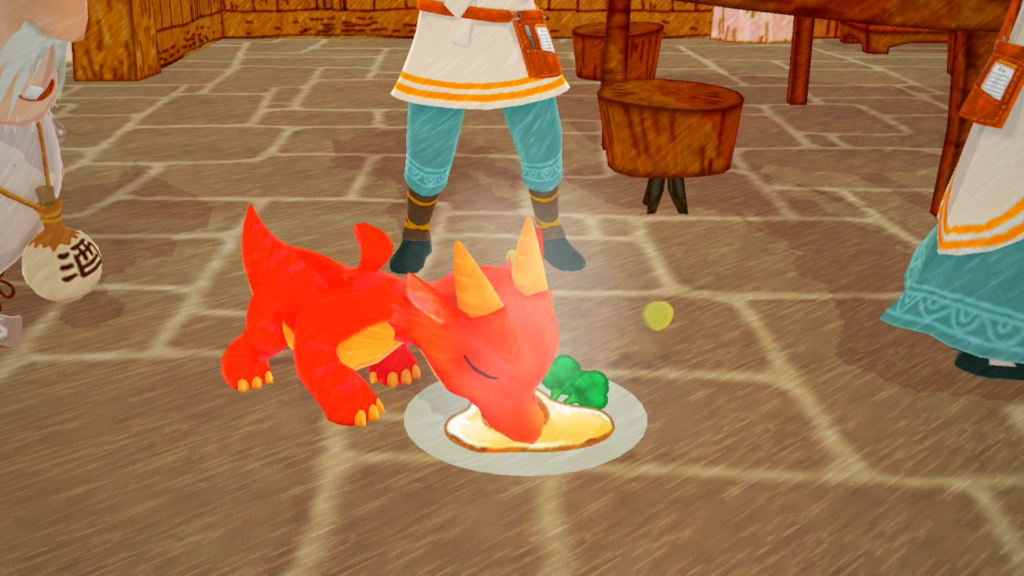 I’m not sure what dragons are supposed to eat, so it might as well be eggs.

What Little Dragons Café lacks in substance it makes up for in style. The game’s art is a pleasing and soothing storybook aesthetic, featuring cute characters and an even cuter dragon. Environments have a hasty scribbled look that adds to this childish appeal. The characters themselves are wild and silly in such a way that they would fit right in to a Saturday morning cartoon. Their interactions are funny and the overarching story each character experiences is enjoyable for the simple little narrative it tells. The story isn’t very nuanced and imparts its message with the subtlety a freight train, but the characters and problems are surprisingly varied and intricate.

It’s a shame then that here too the game falls apart in small ways. Little Dragons Café suffers from every visual glitch in the book, making it hard to stay immersed in the gorgeous world it created. Stiff animations, lagging screens, render distance, confusing UI, and dancing shadows name just a few of the hurdles Little Dragons Café fails to overcome. The story, meanwhile, is plagued by slow progression that shows only one story cutscene per in-game day. 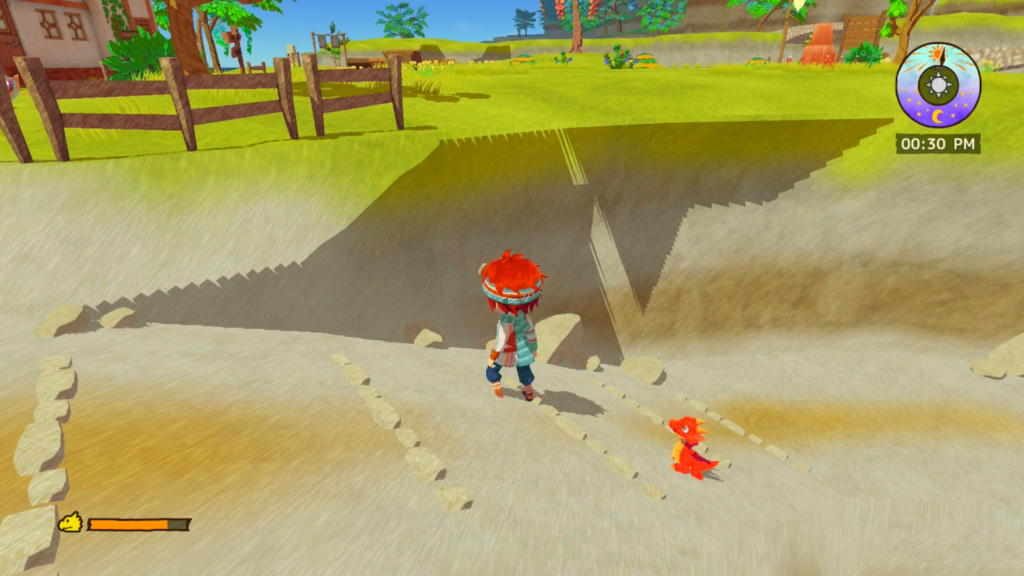 There must be one very strange looking bird in the sky somewhere.

Most of this review can be countered by pointing out the obvious fact that Little Dragons Café is a game for children. The storybook art style, simple gameplay, and lack of meaningful challenge make it clear that this is first and foremost an experience intended for younger players. In a world with Pokemon, Mario, and Minecraft, however, that’s a poor excuse. Just because a game is friendly to younger or less competitive players does not force it to exclude those interested in taking the experience deeper. Other games with similar gameplay have been enjoyed by players young and old, so defending Little Dragon’s Café using its accessibility isn’t a strong argument.

Little Dragons Café succeeds in bringing to life a soothing storybook world with wacky characters, friendly gameplay, and an adorable dragon. It fails in giving players a reason to stay in this wonderful world it’s created, as the gameplay proves a repetitive and mundane slog. It’s not helped by a wide selection of visual issues and sluggish storytelling. It would make for an excellent TV show, but as a game it fails to keep the player interested in what they are doing.