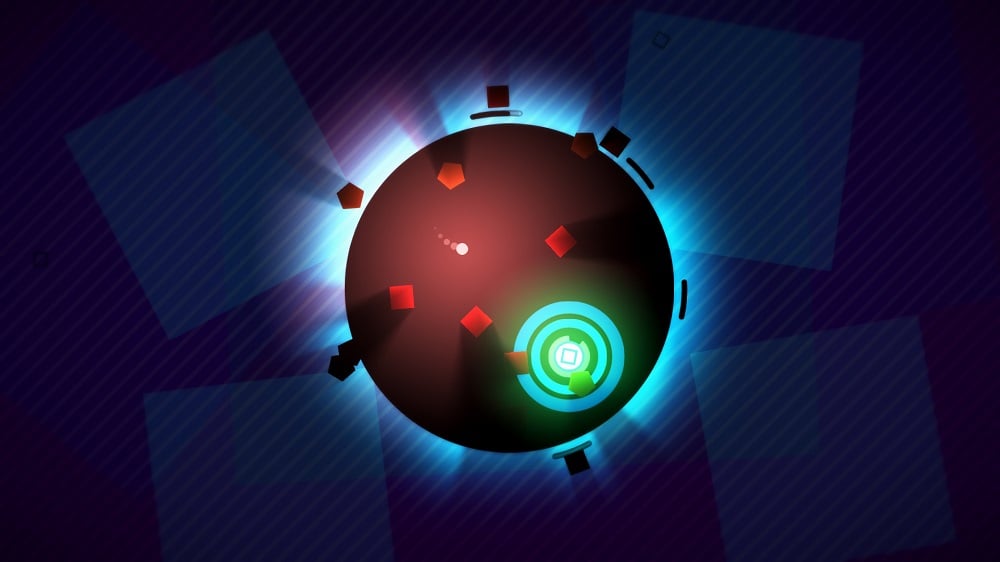 Some of the best game concepts are simple in design and masterful in execution. HyperDot fits into this category neatly; much like the rhythm-based Just Shapes & Beats, the name of the game is evasion. Players are put in control of a square that can’t touch any of the other shapes within a circular stage. However, its innovations to the formula and sheer variety of game types make HyperDot an addictingly arcadey affair all its own.

No matter the stage, the core strategy is the same: Complete objectives while avoiding the shapes flying towards or around you. What gives HyperDot depth are a vast slew of game, enemy, and stage types. Some levels simply require you to survive until the timer runs out, while others task you with collecting tokens or staying in specified areas until a meter fills up. Static enemy shapes moving in defined patterns are entirely different beasts from ones that chase you or explode into deadly fragments. And stage-based gimmicks like ice and darkness make your character harder to control and enemies harder to see, respectively.

All of this culminates in a series of nuanced skill-based trials that feel completely different from one another. Over the 100+ levels included in the single-player campaign, players will see their twitch skills put to the test time and again in unique, visually striking ways. HyperDot isn’t a walk in the park; completing the upper levels of the campaign is grueling, to say the least. But it’s this same stiff challenge and easy pick-up-and-play design that makes HyperDot the perfect “one more game” type of experience. Players can even take the elements seen in campaign levels and create their own stages via a robust built-in level editor.

In addition to its single-player campaign, HyperDot offers a Gauntlet mode (where players can see how far they can get with a predetermined number of lives) and a local multiplayer mode for up to four players complete with fully customizable levels and arena modifiers. While it’s great to see a couch co-op option for families and nearby friends, the lack of online functionality is glaring. There’s no online co-op, no custom level sharing, and no leaderboards for the score-chasers out there (even though the game does track local multiplayer stats). While the single-player content is plentiful, the lack of any online features is a confusing omission that would’ve extended HyperDot’s life that much more.

For as engaging as the moment-to-moment gameplay is, HyperDot’s greatest strength may very well be its eye-catching minimalist style. From its clean lines and fluid transitions between menus to its striking use of color and shadow within stages, Tribe Games has managed to give its simplistic action game a clear identity all its own. The fact that HyperDot’s visual appeal is so tied to its use of color and effects makes it that much more commendable for including accessibility options like a colorblind mode and the ability to toggle animated backgrounds on and off. The team truly thought of everything in terms of design; the game even turns into an aesthetic screensaver if you leave it paused for too long.

As a package, HyperDot is nearly perfect. Had it shipped with online multiplayer and leaderboards, it very well could’ve been. But that doesn’t take away from the ridiculous amount of polish given to every bit of the game’s visuals, UI, and super tight controls. The intense amount of concentration required to best HyperDot’s toughest levels might be off-putting to some, but for those who love the endorphin rush that comes from overcoming steep challenges, this is an absolute must-play.