Rhythm has long been one of the most inventive genres in gaming. Relatively recent gems like Crypt of the NecroDancer and Thumper have each put their own unique spin on what a rhythm game can be. Just Shapes & Beats continues to push things forward with what, retroactively, feels like one of the most natural genre crossovers ever: bullet hell and rhythm.

A Match Made in Rhythm Hell

The core gameplay of Just Shapes and Beats can essentially be boiled down to “Don’t touch the red!” Players take control of a small shape and try to survive each song-based stage by avoiding any and all red-colored obstacles that cross their path. The controls are similarly simple: players move around with the left stick and dash with the A or B buttons. Dashing grants players temporary immunity, allowing them to fly through obstacles for the split-second they’re dashing.

Though bullet hell masters might be able to make their way through stages based on quick reflexes alone, that won’t be the case for most. Some songs are tougher than others, but the default difficulty is just punishing overall. Several songs require trial and error to learn the patterns and optimal routes for survival. Frustrating as this can be at the beginning, it makes every subsequent successful run that much more rewarding.

But for those who don’t want to avoid pulling their hair out at all costs, there’s a really smart (if not misnamed) “casual mode” setting. Whereas some games will cut content, dumb down enemies or slow down the action, Just Shapes & Beats’ casual setting serves to ease players into the game by giving them twice the health. That’s it—the only change to the game’s challenge is the number of times you have to be hit (6 instead of the standard 3).

This seemingly minor handicap works perfectly for this type of game. Having more chances to progress and learn significantly lessens the frustration of constant death and (with some perseverance from the player) effectively eliminates the worry of getting stuck on a particularly nasty level. That said, the casual setting is exclusive to story mode. Not only does this make sense as a way to introduce players to ease players into the game, but it also forces them to get better for the multiplayer-focused challenge mode. 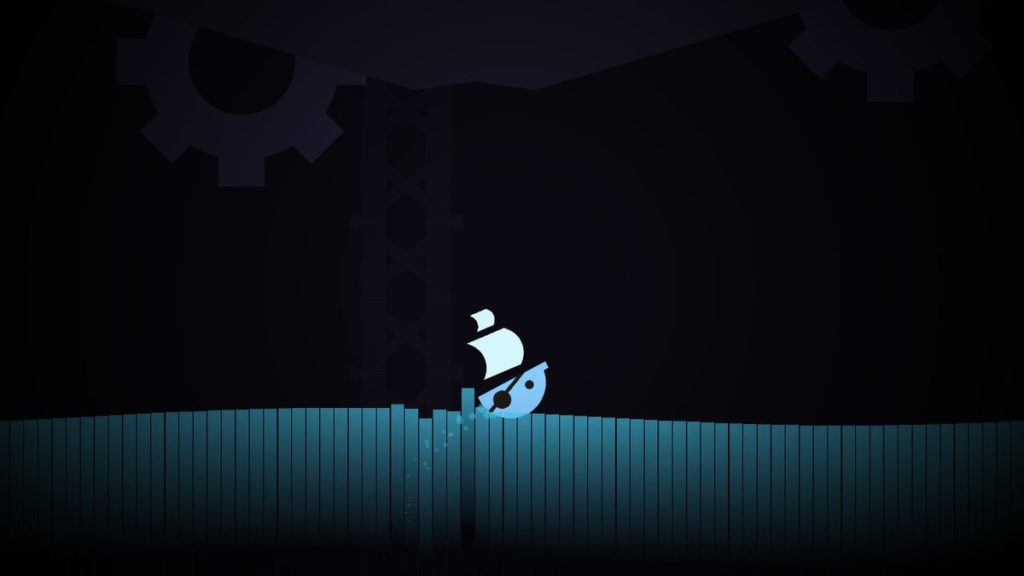 The Story of a Square

It isn’t often that you get a cohesive story mode in a rhythm game, but Just Shapes & Beats manages to put together something that feels premium and heartfelt. Instead of a standard series of stages with a boss at the end, there’s actually a fairly engaging (if not basic) storyline complete with little cutscenes and even side characters. Playing as a little blue square, you’ll travel through a small variety of environments on a mission to stop a corrupted shape from going on a rampage, kidnapping your friend and destroying everything you hold dear.

All of this is told through a combination of cutscenes, really minor platforming sections, regular stages, and boss encounters. It all works for the most part, though the platforming is easily the weakest in terms of execution. Cutscenes are simple yet fun, and the contrast between the neon environments and the pitch black backdrop really make the visuals pop. Each boss encounter in the story mode (all of which translate over to the other modes) appropriately ratchet up the difficulty and provide some of the most intricate stage designs in the game.

Though it only takes a few hours to complete, the true benefit of the story mode is the chance to have a more gradual introduction to stages. Afterward, you can go through scene select and choose where to revisit the story. It’s all a pleasant little surprise and well worth playing through. In fact, those 27 stages serve as the perfect introduction to the real meat of Just Shapes and Beats: Challenge Mode. 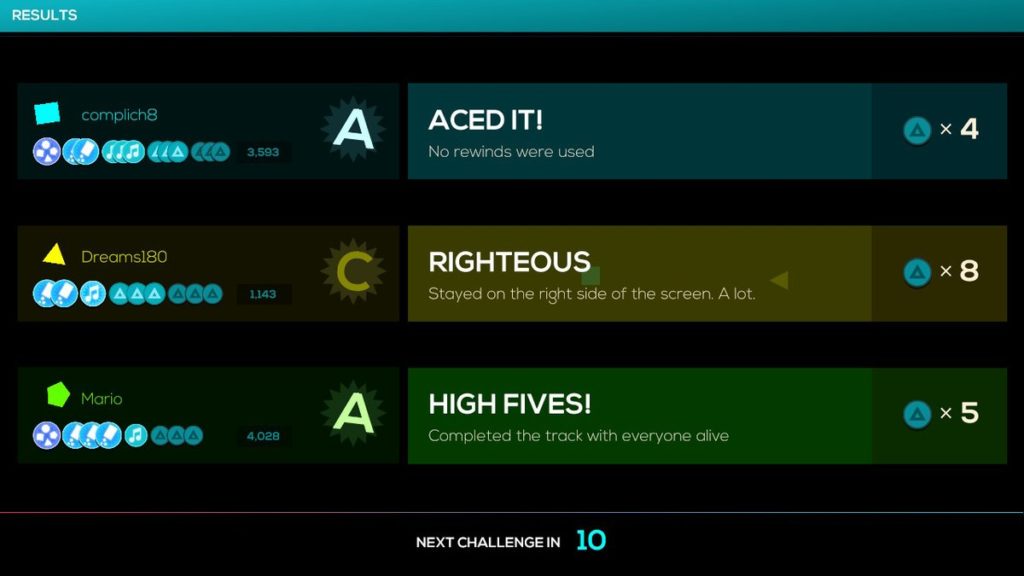 The Good Kind of Challenge

As soon as players finish the story, special challenges (e.g. “Finish a stage without dashing”) and the ability to earn Beat Points become available. Each completed challenge upgrades the home screen with more characters from the story mode partying it up. The number of challenges completed and number of Beat Points all count towards different goal tiers to unlock up to 10 additional songs. So, how does one earn these things?

Challenge mode is where the majority of players will spend the lion’s share of their time with Just Shapes & Beats. It covers all the multiplayer bases one could want: local same-system play, local wireless play, public online play, and private online play with friends. In a welcome twist, the multiplayer here is more cooperative than competitive. Players go through 3 rounds: 2 normal and one boss at the end. Nothing about the stages or gameplay changes from the story mode to the challenge mode. The only difference is that if a player dies during a song, they turn into a ghost that a teammate can revive by passing through them. It is always in the best interest of players to help their teammates because fewer chances to survive can end up in failure.

At the end of each round players are awarded with point bonuses depending on what they did they did (staying on the right side of the screen a lot, being the first to clear a checkpoint, etc.). Not only is it fun to experience these challenges with a friend or stranger online, but earning points by doing so presents a pretty decent incentive for those who want to unlock everything Just Shapes & Beats has to offer. 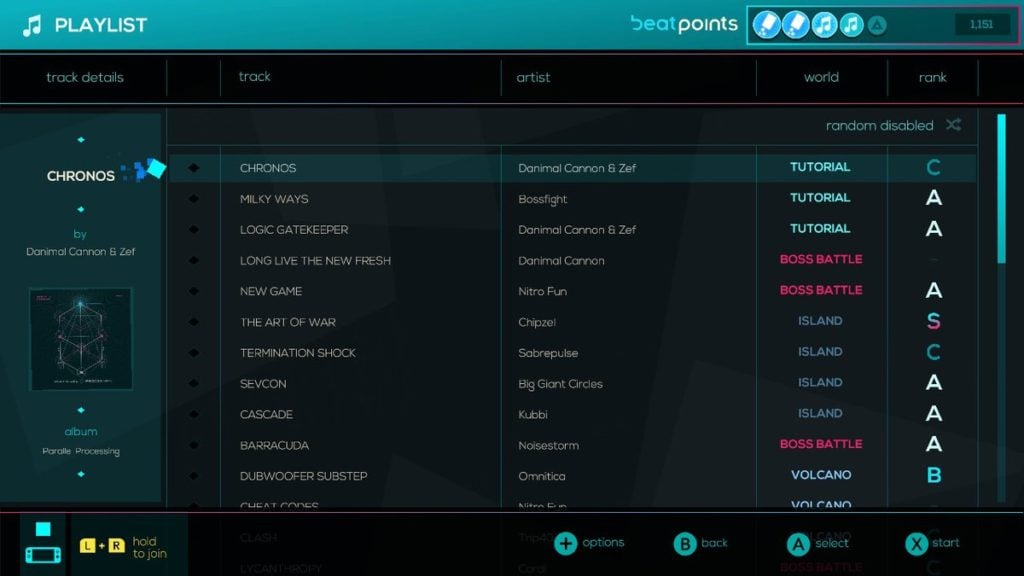 Of course, none of this matters if the game’s soundtrack isn’t up to par. Fortunately, the core OST here is incredibly solid. It’s all EDM, but there’s such a wide array of sounds and ideas on display that tracks never feel too samey or uninteresting. Some tunes are especially catchy and memorable (the boss tracks in particular), but everyone is sure to have their favorites.

If you do find that you love a particular song or stage more than the rest, Just Shapes & Beats offers a super handy “playlist mode” that lets players construct their own playlist of stages to run through. There’s even the option to play for Beat Points or just for fun. The “just for fun” concept also carries over to the game’s “party mode.” Party mode is literally a random, endless mode meant to be played as background. It’s a fun little extra, though its usefulness is a bit doubtful. 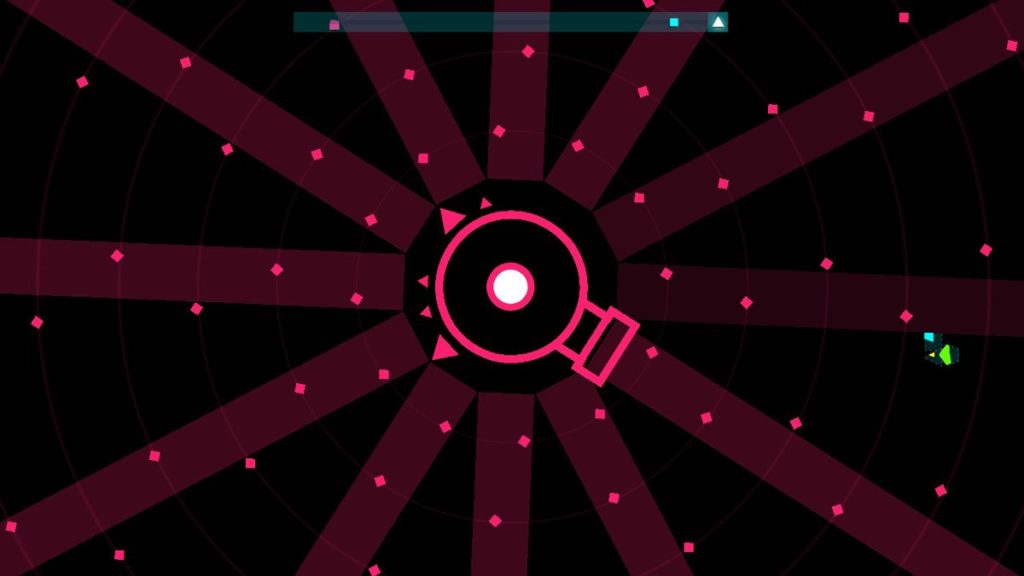 Just Shapes & Beats is an undeniably fun fusion that works so well I’m shocked it hasn’t been done before. The learning curve here is serious yet rewarding; dying often can be the norm, but so can making harrowing last-second escapes. While the base song list isn’t super lengthy, the task of working together with others to complete challenges and earn Beat Points to unlock new songs is a welcome one. And though I did experience slowdown both in story mode and challenge mode, it was never enough to hinder my enjoyment of the game. If you’re looking for a fun rhythm game that loves to push you to your limits, Just Shapes & Beats is an easy recommendation. If you specifically want a ton of variety, however, you might be better off looking elsewhere.