The bullet hell sub-genre is certainly a niche one in the west, as the most popular titles often find the majority of their success in Japan. Few developers outside of Cave have really made an attempt at mastering the genre, as the games created from that studio are considered the cream of the crop. However, indie developer Stellar Circle has taken on the challenge with Blue Revolver, and while it never reaches the heights of the titles that inspired it, it certainly provides plenty of shoot ‘em up action that fans and newcomers will enjoy.

Bullet hell games are all about the gameplay, and in this area Blue Revolver does not disappoint. Maneuvering through screen-filling waves of bullets is just as fun and tight as it’s ever been, albeit with an addictive scoring system to complement the high octane gameplay. Destroying two enemies in succession causes a multiplier to appear on the top of the screen. This multiplier can reach a maximum of eight, however the player can only take advantage of this by using their limited secondary fire. Destroying enemies in this manner while there is a high multiplier results in an explosion of golden gems, each worth a ton of points. Monitoring the multiplier as well as the secondary fire gauge requires a lot of skill, however a convenient tutorial makes it easy for anyone to learn. 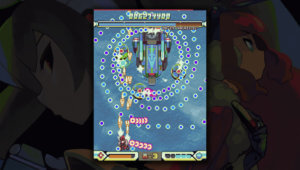 Yes, those are all bullets.

Stellar Circle has done an excellent job in making sure Blue Revolver has plenty of content for players interested in getting better. Two playable characters, three difficulty modes, and five stages round out the excellent campaign mode. While the standard mode gives the player two continues to start out, there is an unlockable Free Play mode that features an unlimited number of continues for those that just want to practice. While five stages may seem like a disappointment at first, they are highly replayable, especially when trying to get the highest score possible. Lengthy boss battles at the end of each stage serve as Blue Revolver’s toughest challenge by far. Some of their bullet patterns are downright evil, however none of them are impossible.

There is also a mission mode that adds new rules and challenges to different sections of each level. One of the coolest missions types involves disappearing bullets. All bullets on the screen remain visible until they come within a certain distance of the player. Once they do, they turn invisible and their location must be memorized in order to complete the stage. Another mission causes enemies to release bullets when they are destroyed, adding to the mayhem.

Everything about Blue Revolver’s gameplay is fantastic; it’s the presentation that lacks the ‘wow’ factor. The music lacks any sort of punch and doesn’t do much to make itself memorable. It’s not that the tracks are awful, they just aren’t spectacular by any means. Titles in this genre often excel when it comes to the sound department (just look at any of Cave’s shooters), so it’s a bit disappointing to see that Blue Revolver doesn’t do the same. 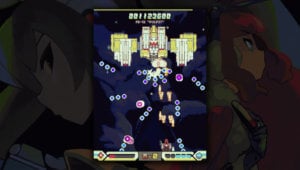 A little aesthetic variation would have been nice.

All of the art in this game is done with an anime aesthetic, which works well in this genre. Unfortunately, the enemy designs are bland and uninteresting for the most part. This wouldn’t be such a bad thing if the bosses changed up the formula, but unfortunately they don’t do much to seem unique either, as most of them appear to be generic ship designs with varying sizes. While this certainly does not hinder the gameplay, it does take away from the experience overall.

For what Blue Revolver lacks in presentation, it certainly makes up for it with a fantastic gameplay and scoring system. It undoubtedly serves as a great entry shooter for newcomers to the bullet hell genre thanks to its simple tutorial. It’s nice to see indie developers taking a stab at niche genres, and hopefully titles like this will entice more people to give them a try.

The Wii-eulogy: Remembering the Gamepad

Highlighting the Differences Between ‘Dark Souls’ and ‘Nioh’