The Metronomicon
Developed by Puuba
Published by Kasedo Games
Available on GOG, Steam

Games today have taken on the challenge of fusing elements of different genres in order to make the story, gameplay, or characters more compelling, but a rhythm-based action game with aspects of an RPG? How could that work?

In The Metronomicon, these worlds blend into a colorful work of art that stands apart from other music-based games like Rock Band or Guitar Hero. The story begins with the graduation of four new masters of the “rhythmic combat arts”, ready to throw melodic attacks at the horrible creatures created by the evil Metronomicon, a mysterious force infecting the land.

This story, which seemed somewhat comical at first due to the art style and immature attitudes of certain characters, does continue to develop as your characters travel through locations like “The Wild Forest” and “Mount Rage”. New characters also show up along the way that offer more depth to the world.

The real strength to The Metronomicon is its fast-paced, exciting, and ever-changing gameplay. The mechanics operate in the same way as most other rhythm games on the market. As the colored arrow scrolls down the screen, you are required to hit the corresponding arrow on your keyboard. You perform attacks, supporting magic and offensive spells by building streaks for certain lengths of time on each character.

The additional twist comes into play when you realize that you are controlling four characters at the same time in a battle, switching between them by pressing your “Shift” keys. And that is where the true fun of the game begins. Real-time strategizing occurs as you prioritize whether to cast “Cure” with one character or perform “Bash” with another.

Once you’ve decided, the question arises as to whether you can actually play the rhythm challenge placed before you, and whether it would be best to choose the easier notes available to another of your characters at that time. While complicated at first, the character changes and constant decision-making became second nature very quickly.

Even though I was able to catch on to those change, the battle screen is incredibly overwhelming. After playing through the entire story mode, I still struggled with finding certain elements on the screen. The game doesn’t offer you a great opportunity to take it in as you are always focused on the fast-paced notes. While this could be another reason to play more, it could also speak to the immense amount of material that comes with combining two massive genres.

The RPG elements of the game add another layer in battle. As your characters level up, they unlock new moves and equipment, giving them even more ways to fight the Metronomicon’s creatures. For some, this means unlocking a new elemental attack while for your offensive characters, this would mean an attack that causes a status ailment such as “Bleed”, which slowly drains your enemy’s health. 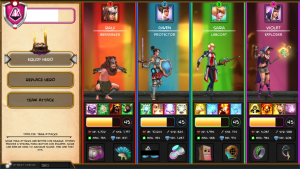 Swapping out these moves, your characters and the different equipment do help to change each encounter, keeping each song battle fresh and exciting. The game didn’t make me feel like I was becoming a button-mashing robot, which can be a problem with rhythm games.

Ultimately, any game with a rhythm element must have an impressive playlist, and The Metronomicon is no exception. The game boasts a fully-licensed soundtrack full of great electronic and indie artists, including an exclusive track from Jimmy Urine of Mindless Self Indulgence and an unreleased track from American rock/electronica band Shiny Toy Guns.

The only real downside to this soundtrack comes with extended play of The Metronomicon. The tracks, while great separately, can begin to sound extremely repetitive after you’ve been playing through the story for a while. There are standout tracks that are markedly different from the others, but some of the others seem more like filler.

This problem could be because many of the artists contributed multiple tracks to the game’s soundtrack. Even though YACHT, Perturbator, and J-Punch are certainly artists with different sounds, the unique tracks can seem like oases in a desert in some of The Metronomicon’s levels.

Despite this minor complaint, The Metronomicon’s mashup of genres allows it to have multiple game modes that make you want to keep playing even after finishing the initial story. In the “Arena” mode, new challenges are available daily to earn specialized equipment and “street cred”, a type of currency used to rebuild damaged parts of the character’s alma mater. By rebuilding this, you unlock even more sections of the game and new team attacks, incredibly powerful abilities that can be the saving grace of a difficult song battle.

At the end of the day, The Metronomicon speaks to the very essence of what a game should be at its core: fun. There are no incredibly meaningful takeaways, no profound messages to speak to, but that’s not what this is about. If you need something that will allow you to truly escape, destress and have pure fun, then grab your dancing shoes. The Metronomicon awaits.