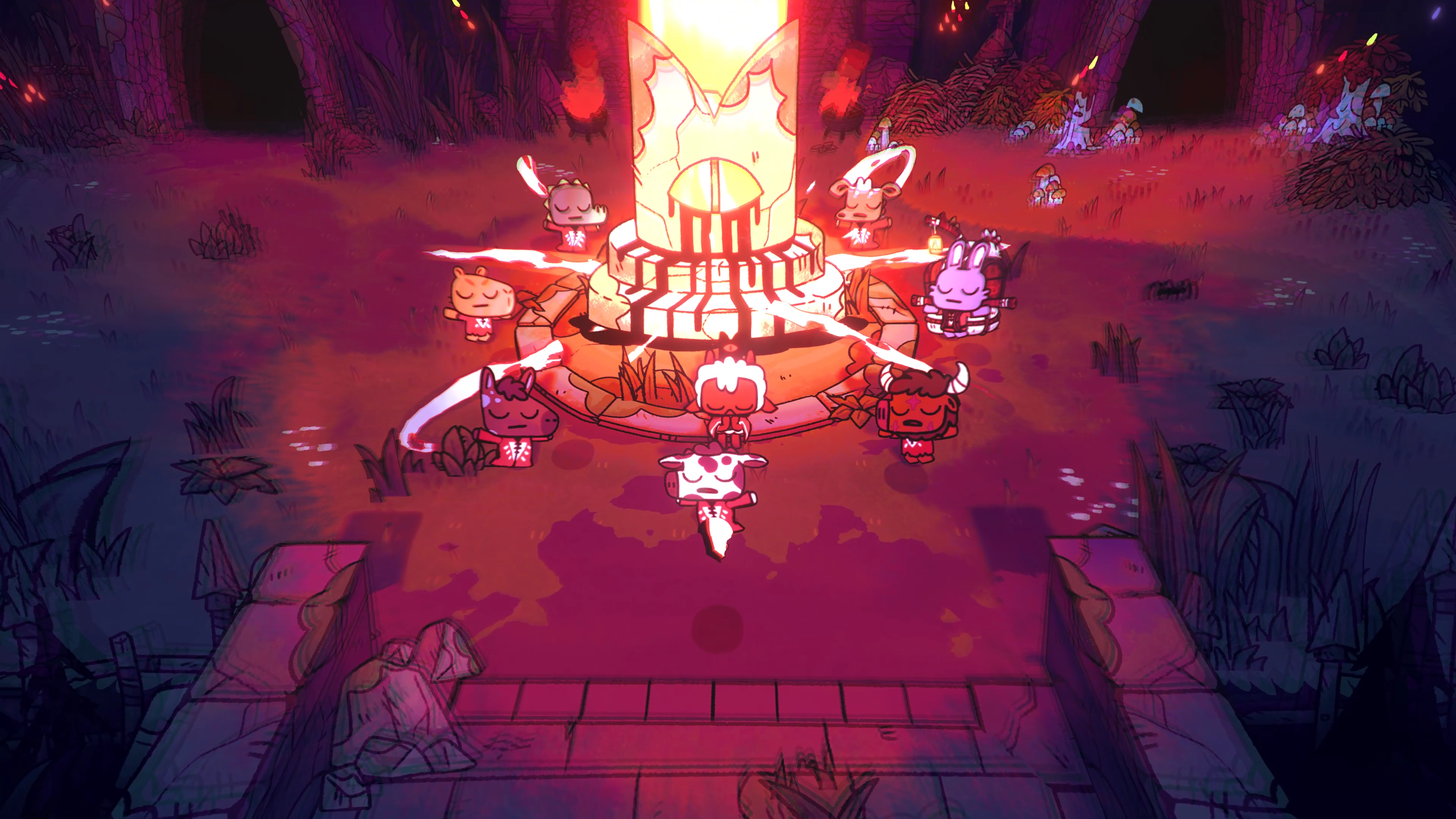 In Cult of the Lamb, developer Massive Monster has smashed together two distinct genres: RPG action-roguelike, and simulation, all wrapped up in an adorably cute and creepy wrapper. It’s a fascinating blend, and potentially overwhelming at first. The information Cult of the Lamb doles out at its start is dense, but with a few helpful tips, becomes easier to parse. Below is some advice that will keep your cult happy, your demonic benefactor satisfied, and gameplay experience frustration-free.

Touch Grass (Then Eat it)

As Cult of the Lamb progresses, players can confer certain perks to their cult through issuing Doctrines. Doctrines can be preached after collecting Commandment Tablets, gained by raising the loyalty level of followers. Turn in three Tablets at the temple, and the lamb can choose a new trait or skill from one of five categories. All five categories have useful features to unlock that help the lamb in the long run, but to mitigate the stress of managing a large cult, max out the “sustenance” leg first. One of the most useful bonuses in the game by far is the Grass Eater trait.

Having this trait makes it so that followers who eat the meals made from grass will no longer suffer any ill effects. This means that as long as the player has gathered enough grass, they never have to worry about the negative effects conferred upon cult members from eating a bad meal. Grass is abundant, a resource that appears in every biome during a Crusade if the lamb takes a little extra time to do some looting. With enough grass stocked and Grass Eater active, players never have to worry about their cult going hungry ever again.

The clock is always ticking in Cult of the Lamb, and with time comes the inevitability of death for cult members. Followers start off young and enthusiastic, but after a few in-game days, they’ll start to grow old. Older followers move slower and cannot help build new structures; at a certain point, they are not even useful as sacrifices to revive the lamb during a run, as The One Who Waits prefers young blood. Worst of all, if a follower dies of old age in front of other cult members, those followers may grow afraid or even throw up in disgust, which can start a chain reaction of other followers getting sick. Death may seem unavoidable, but in Cult of the Lamb, there are ways to make it manageable, or even beneficial.

There are a different ways turn death into an opportunity. While the wisdom of age and experience is valuable, in Cult of the Lamb it is often a liability. Keep followers loyal, and when they dip into old age, read their thoughts to see if they feel weary. If it seems as though they’re feeling tired, it might mean they are ready to be used. At the temple, two rituals are useful here: the lamb can choose to sacrifice a follower, or to ascend them to a higher plane of existence (really just sacrificing them, but in a nicer fashion). Performing either of these rituals circumvents the issue of a follower dying unexpectedly and throwing the rest of the cult into chaos. As a bonus, followers will witness firsthand the power of The One Who Waits.

One of the perks of being a charismatic cult leader who can brainwash anyone is that finding a partner to love and cherish ’til death parts them is absurdly easy. The lamb can perform a marriage ceremony to marry anyone in the cult, and doing so is hugely beneficial. Marriage greatly increases a given follower’s loyalty, making it easier for them to level up and grant an additional Commandment Tablet to the lamb, and the ceremony also increases the entire cult’s devotion by a few points.

There is also another massive benefit: if the lamb dies during a Crusade and has the option to sacrifice a follower to continue the run, sacrificing a spouse is a surefire way to be revived with additional hearts, often beyond the starting capacity. Cult of the Lamb encourages players to marry as many followers as they like; as the game says, “it’s your cult, after all”. While having too many spouses at a time may cause some strife and bickering between followers, it is worth it for the revival potential alone.

Clean Up Your Sh*t

Early on in Cult of the Lamb, before the living space is fully cultivated and cleared of brush, the lamb’s followers are more than happy to shit in the woods. This can become a huge problem over time, especially if the player isn’t paying attention to the well-being of the cult as a whole. Too much excrement around the camp makes for unsurprisingly unsanitary living conditions, and followers can quickly grow ill if the lamb isn’t careful. An easy fix is make sure that all poop is cleaned up and attended to as soon as possible, but the lamb has better things to do than run around with a pooper scooper like they’re at a dog park. Fortunately, there are solutions.

Two buildings make dealing with doodoo a thing of the past: the outhouse, and the janitor station. The outhouse is exactly what it sounds like: a simple structure where cult members can poop in peace. But having a janitor station is just as essential. Eventually, the outhouse will reach capacity, forcing followers to relieve themselves elsewhere. A janitor station allows the lamb to assign followers to clean up messes anywhere around the cult, perfect for when the outhouse is full and someone has an accident. Cult of the Lamb becomes much easier to stomach when bowel movements are not something the player constantly has to see and clean up. What’s more, having an outhouse gives the player an easy place to collect fertilizer, an essential resource for more advanced late-game structures.

It is easy to forget that Cult of the Lamb is, well, about fostering a cult from the ground up. A cult without rituals is hardly a cult at all, and The One Who Waits has granted the lamb extraordinarily powerful rituals if they can scrounge up the resources.

Looting during Crusades may seem a fruitless exercise but once the player understands the power of rituals, they will always want to have their coffers well-stocked with bones and other loot. While not every ritual may not seem immediately useful, performing one at the proper time can provide just the right bonus to keep the cult happy and loyal during crucial moments. The Ritual of Resurrection is almost essential, allowing the lamb to call back a deceased follower from the afterlife. Combined with the Wedding ritual, the lamb can essentially create super loyal followers that can be sacrificed for revival at the drop of a hat. There’s the Ritual Fast, relieving followers of the urge to eat for days on end–perfect for going out on an extended Crusade. Players can decide whether they want to be a leader who rules through fear or through inspiration, and rituals are a crucial part of that.

Lay Your Weary Head to Rest

Invest in beds. Seems simple–but if the lamb doesn’t have enough beds for their followers, devotion will erode constantly as cult members lose sleep and sow dissent. Construct as many beds as necessary, and remember to upgrade them. Beds will collapse constantly if they aren’t maintained, creating setbacks that can be easily avoided. Eventually, beds can upgraded so that not only will they not break down, followers will generate devotion while they’re asleep in them. This should be one of the first things new players try and get a handle.

One of the most charming aspects of Cult of the Lamb is the art direction and character design. Do enough exploring during Crusades, and the lamb will encounter memorable NPCs and unlock new areas to visit. Every new area has a slew of sidequests to complete and special items to purchase or obtain. While most sidequests are mechanically simple–usually a fetch quest or something similar–they are well worth completing. Certain NPCs will reward the lamb with fragments of a Holy Talisman; collecting four fragments will result in a completed Talisman, which can be exchanged at the temple for a new Fleece to wear. Fleeces completely change how combat works during Crusades, making them well worth the grind to earn and experiment with.

Visiting areas outside of the main hub will also allow the lamb to find unique cosmetic items and unlock new tarot cards, which can be found and used during Crusades. Mostly though, sidequests are an excuse to spend more time in the world of Cult of the Lamb, soaking in atmosphere and enjoying what Massive Monster has created.