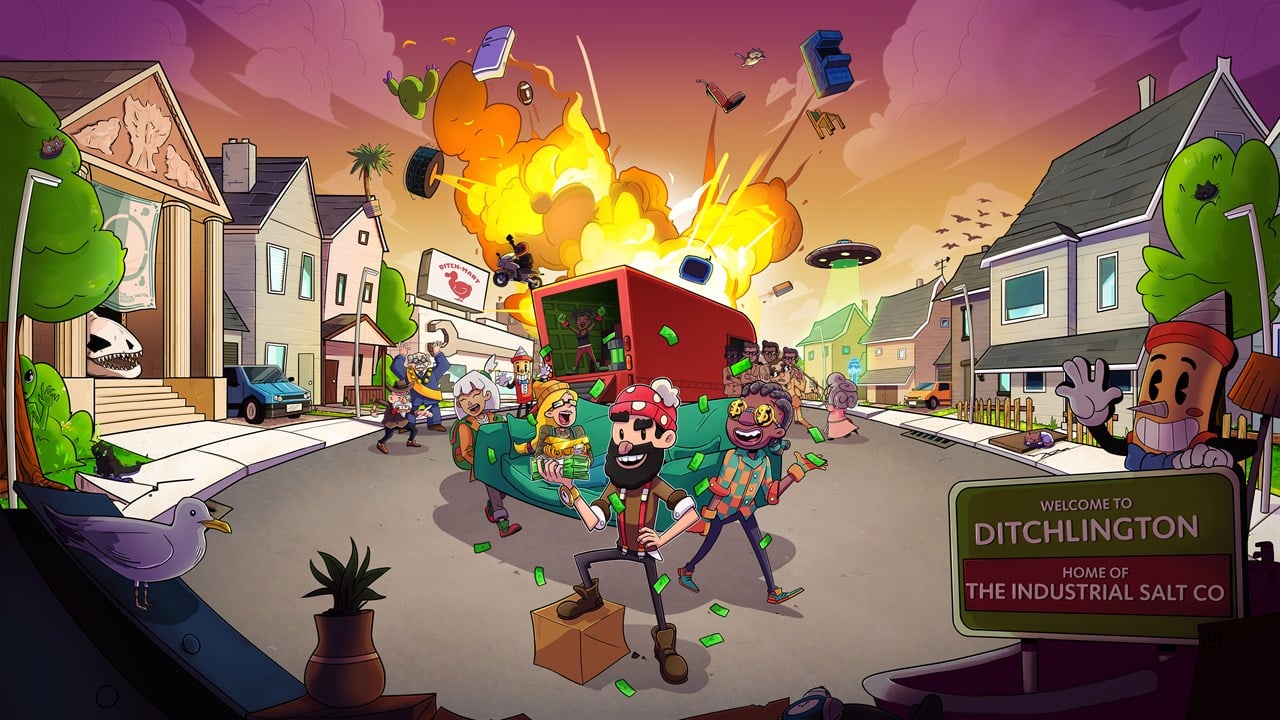 As it was stuffed away on Google Stadia’s exclusive lineup of titles and launched underneath the peak of a global pandemic, Moonshine Studios’ multiplayer cooperative bash Get Packed could not catch a break. One year after its initial release, the party packing game is back and finally making its way to consoles and PC with a complete version featuring what the developers initially envisioned. Delivering on its promises by adding in the two missing final campaign chapters, seven extra versus levels, new quality of life improvements, and a plethora of character customization, there has never been a better time to gather your friends and play this physics-based romp, either locally or online.

Get Packed: Fully Loaded still upholds the same story as the original release that slid in brief cutscenes and text quips to bookend its levels. However, this time around, the narrative has been completed. Taking place in a small suburban area when a greedy Salt Mining Company strikes a deal with the mayor of Ditchlington, Last Ditch Removals undertakes a massive hostile eviction of the entire town. As a small group of four unlikely packing agent heroes that are abusing the suffering of others to make a quick buck, the player’s goal is to load objects onto a truck while leaving a cleansing trail of little to no destruction behind.

While Get Packed: Fully Loaded may sound a lot like DevM Games and Team17’s multiplayer hit Moving Out — which ironically released the same day back in 2020 — Moonshine Studio’s title is far different. Not only does it rely more on its comic relief that comes from gameplay physics rather than the former’s writing, but it also contains a completely different round pacing. In Get Packed, the game’s physics are destructive and ragdoll-like. Everything the player swings around can explode and collapse with ease if they are not careful with their surroundings. Time is always of the essence as destroying valuable objects can be a detriment to the player’s score.

Get Packed features quickfire intervals of deliveries that are less reliant on being one big send-off. In the same vein as Overcooked!, Get Packed has timed objectives that urge players to think in meticulous chunks rather than just one big end goal picture. While the truck can be packed in massive loads, players are rewarded for temporarily sending their wanted cargo off for extra cash. The fact that players can pack the truck and send it off at any given time to clear floor space makes Get Packed vastly different from how players would normally tackle its competitor Moving Out. It is a different type of strategic thinking that still requires planning but certainly can enforce more improvisation.

Rather than having that intricate feeling of having to pack one massive puzzle, Get Packed allows players to experience quick-fire rounds of thinking cautiously and creatively with their environment. The end result is something drastically different from its competition as the game leaves plenty of room for players to experiment. The player’s approach to what items they want to grab and what areas of a map they choose to tackle first always leaves an impact on their ending score. Ultimately, Get Packed heavily revolves around its point system. While causing destruction is chaotically humorous, the consequences players will pay for their actions is steep. Finding an efficient method to scoring the most amount of cash by packing the most — or possibly even the least amount of items is constantly thrilling.

The one aspect of the gameplay in Get Packed that can feel bothersome is when handling and overpacking cramped areas. Like Moving Out, Get Packed is the type of game where its physics can often work against the player’s control and movement. Considering how delicate many objectives in the game are, it can be rather easy to accidentally trash your haul trying to get out of a tight space. It is especially easy to get stuck inside the back of the moving truck. A simple solution to this issue could be for the developers to just simply extend the player’s jump in terms of both height and range as the mechanic is not often used outside of the every now and then gimmick.

Additionally, the game’s variety can definitely begin to slip as players reach the end of the campaign. While there are dozens of different ways to tackle each individual level and their list of objectives, the variety in mechanics slows down as the epilogue gets closer. None of the newly introduced or reused mechanics are ever tiresome, but it is a shame how they are underutilized. More future content is still not out of the question just yet but if Moonshine Studios is to add extra levels to Get Packed: Fully Loaded then the developers should focus on providing the player with new experiences within levels by reusing the great establishment they have.

For returning fans of the Google Stadia release of the game, you may be wondering whether or not Fully Loaded is worth double-dipping on for its new content. If you happen to be one of these people who played the title last year, you can actually start playing the latest levels of Get Packed right now for free. As promised by Moonshine Studios who planned to expand the game through multiple updates, original adopters of Get Packed will be receiving the Fully Loaded enhancement as an update on Google Stadia at no extra cost.

Get Packed: Fully Loaded truly is the complete package that the developers first set out to create. Its newest levels are the cherry on top of its delightful package as it adds more experimental ways to experience its gameplay, customization allows players to flaunt their individuality in multiplayer, and the new slew of versus stages is a blast.

It is no surprise why Coatsink Games would take interest in Moonshine Studios’ Get Packed and continue to support its amusing foundation. For a publisher keen on housing games to play with friends, Get Packed: Fully Loaded is not only a perfect fit for the company’s lineup of titles but a perfect candidate to bring to a wider audience. While it may certainly pull a lot of ideas from its competitors such as Overcooked! and Tools Up!, Get Packed is yet another tightly sealed box waiting to explode with multiplayer entertainment for families and friends. Fully Loaded will surely bring the game back to life as it flaunts its definitive version.