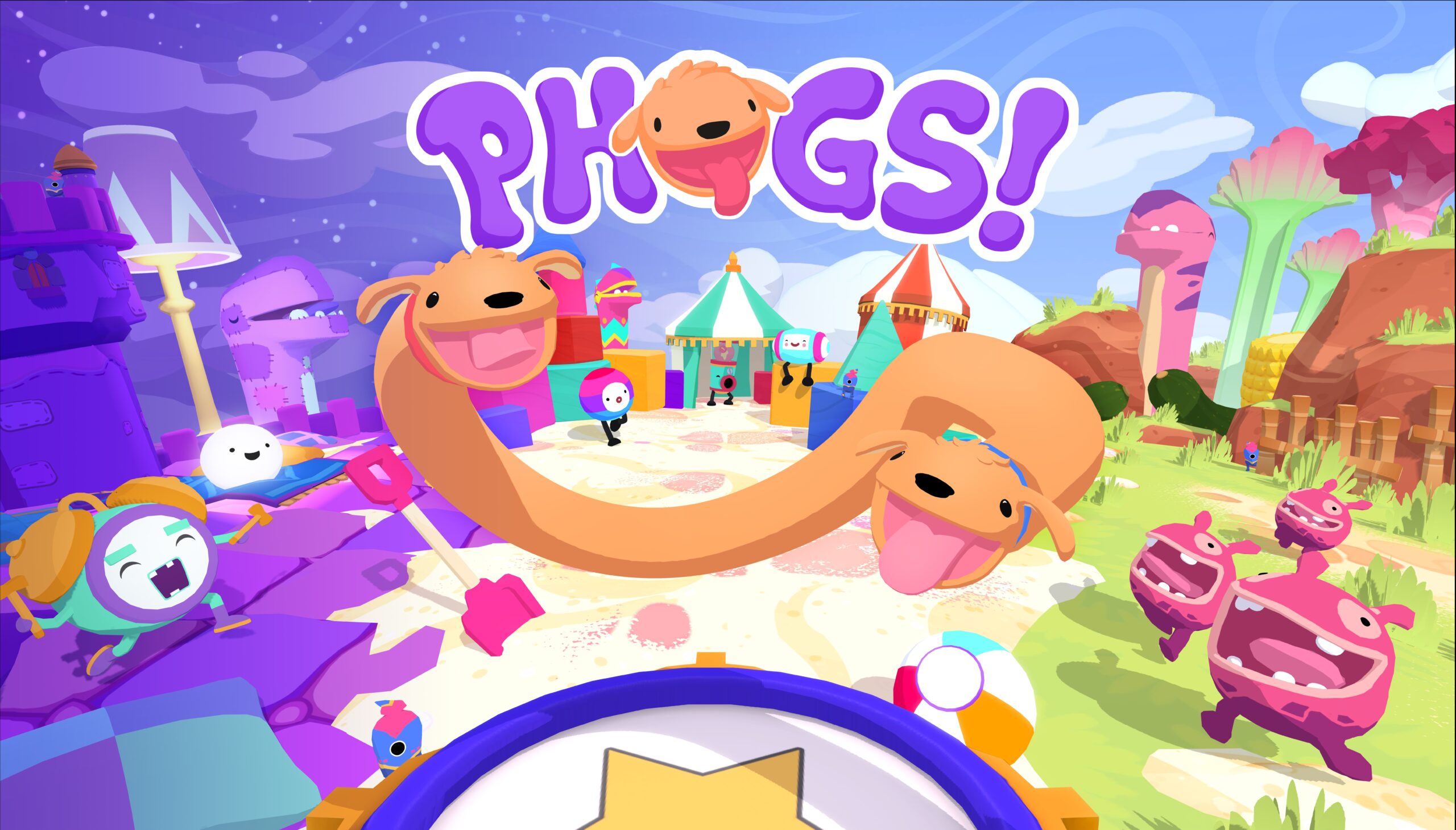 Just a little over two years ago, Bit Loom Games was being stuffed away in corners at local conventions as they asked folks for their opinions of a new experiment title that would combine physics and dogs. As they continued to build upon their appealing foundation of science and animals, that premiere title quickly evolved into a highly anticipated one for many indie game perusers. Within its ten-plus hour run, PHOGS! may reutilize various puzzle-solving concepts and designs, but it always knows how to keep you attached to its loveable world packed with crafty mechanics, fun characters, and sweet designs. In the same style as Coatsink’s most recently published multiplayer smorgasbord Cake Bash, PHOGS! is another tasty treat from the parent publisher and a team of three friends from Dundee and Bristol.

Play is always in motion with PHOGS!

Surprisingly, PHOGS! actually lacks any sort of story as the game rides full shotgun on a gameplay-centered experience never hindered by cutscenes or dialogue. The game is divided into three worlds revolving around every dog’s- or rather phog’s- favorite activities; that being food, sleep, and of course play. As the lithesome cylinder-shaped dynamic duo, Red and Blue- color-coded by their retrospective collars- the overarching goal of your misadventures is to help out native citizens of the three worlds, restore peace, have fun, collect treats, and act ingeniously. Despite being a cooperative title, Red and Blue never detach from one another as they intertwine to showcase the magnificent abilities of phogs- or “phoggos” as the devs like to call them.

Playing as a species of conjoined stretchable dogs is where the game thrives most. PHOGS! relies on using only the analog stick and shoulder buttons of a controller. The front triggers allow your phog to bork (pick up items and woof), while the back helps the characters stretch to their limit. The left side of a controller posses Red while the right takes over Blue (ironically a perfect joy-con coordination for neon Switch adopters). This manageable and easy to grasp control scheme oddly leaves the possibility of two players being able to share that of a singular controller even during multiplayer sessions. As an added bonus, players can taunt each other with four different emotions using the face buttons.

The stretchability of the main duo is what PHOGS! always throws into the spotlight. While there are puzzles to solve in this physics-based world without the need of both phogs, the bulk of the game relies on overcoming obstacles designed to be conquered by utilizing both heads simultaneously. As you traverse each landscape, players will need to think about how they can solve puzzles by multitasking. There are certainly quite a few repeating game-design ideas laid out over each world, but never enough to make things feel repetitious. The only problem with the game’s main mechanic is the fact that sometimes it can get rather glitchy in specific areas. The bugs are not game-breaking, but they can definitely use some slight cleanup. Luckily, Coatsink has informed me that they are working on a day-one patch for the game so hopefully, some of its architecture gets cleaned up right before the public can go permanently hands-on with it.

PHOGS! never holds players by a leash as it flaunts competent enigmas.

Where the game’s puzzles can get really tricky is when aiming for that triple-digit completion percentage. PHOGS! certainly does not hold players by a leash over the course of its core adventure, but that especially applies to the stage collectibles. Scattered throughout every single level are two different forms of hidden items being golden bone treats and a Boingle; a one-eyed two-legged blue pointy creature. While Boingles are typically hiding in plain sight for the player to find, bones are obtained by assisting local inhabitants with their personal problems or making a risky jump with needed precautions. In the same vein as most other two and three-dimensional platformers, grabbing all of these items is the only way you will get to truly experience everything the game has to offer, however, they are absolutely not a necessity to actually beating the title. While I can not say what Boingles do, all bones provide are in-game currency used to purchase different hats for your phogs.

Fueling every aspect behind PHOGS! is the appreciable atmosphere of the Food, Sleep, and Play worlds along with the Hub Home. The structure and themes of each landscape constantly intertwine with what or who you are always interacting with. All three worlds supply players with some of the game’s greatest joys. They are constantly embracing their themes as they attempt to dabble in subtopics to distinguish levels within their connected worlds. Each is an absolute pleasure to explore as hubs and stages are packed with fittingly designed creatures and structures. The only thing truly missing in these characters is a more lively attitude. Oftentimes characters can feel glued in place as they lack any sort of special animations or gestures for players to find. While their placement is welcomed as it keeps each world feeling inhabited, it is a shame that they do not have much to do outside of being a neat object to look at.

If there is one aspect to PHOGS! players will be a bit disappointed in it would have to be the overall sound design. None of the sound design reaks of bad decisions by any means, yet there is more to be desired when considering how great some of the individual level themes can be. The main orchestrations here are certainly far from inaudible as almost all of the tracks fit into their retrospective worlds, but they are extremely short which ultimately leads to long loops that can become annoying at times. If a world takes you more than twenty or thirty minutes, you could be potentially listening to the same 45-second looping soundtrack for well over three dozen times in a single sitting. Similarly to the main soundtrack, the “collectible get” noise does its job, but it could be more satisfying as earning a challenging bone or Boingle should undoubtedly end off on an arousing punch.

PHOGS! provides a whimsical world well worth exploring- especially with a buddy.

PHOGS! is an adorably simplistic journey that manages to balance being a relaxing experience for all ages while providing just enough challenging obstacles to make skilled players want to aim for that full completionist score. It may encounter a technical hiccup every now and then due to its experimental gimmick that is notably well utilized, but it is nothing that will beat upon your experience. Bit Loom Games’ team of three developers should be proud as their double doggy adventure published by Coatsink is able to grab audiences’ attention through its ideas of stretchiness that never grows stale. On top of some rather amusing esthetics that creatively plays well with its straightforward themes, the overall package being presented accumulates into a well-paced and articulated physics-based puzzle game worth your time. Grab some tasty treats and get a substantial amount of sleep because you will definitely not want to miss out on playing PHOGS! right now whether you are by yourself or with a friend.