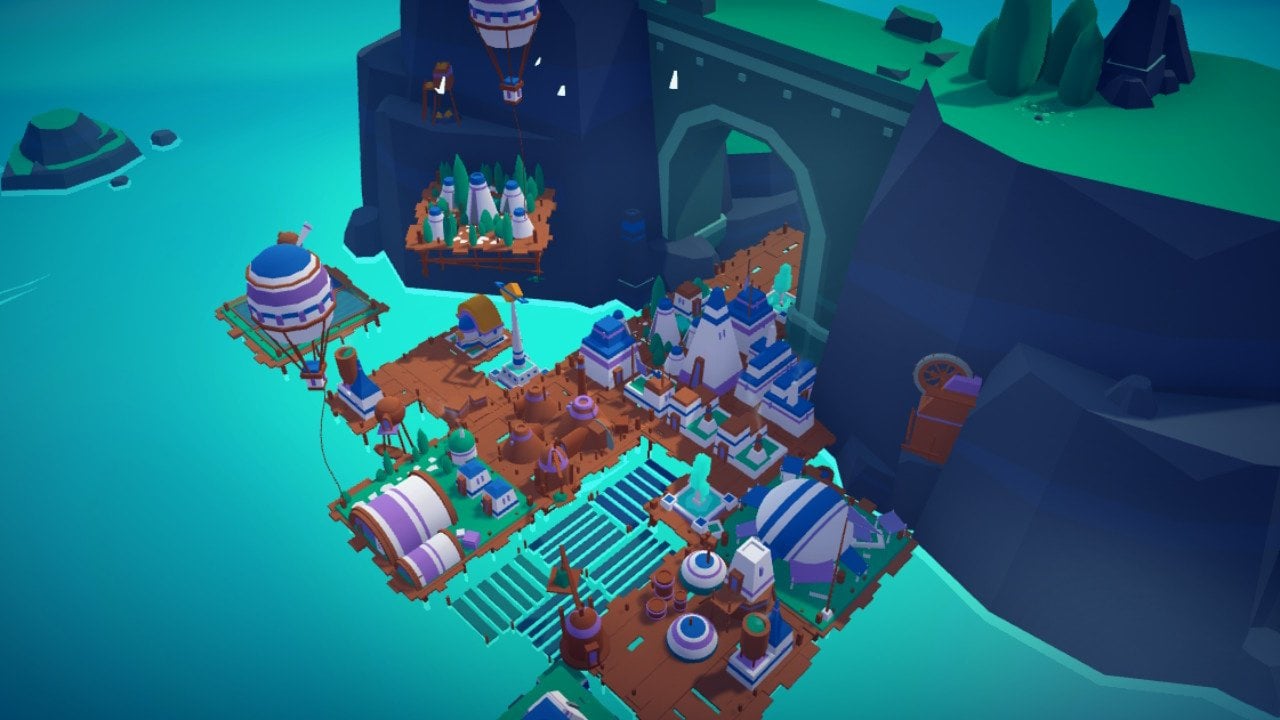 In April of 2019, one of Steam’s most popular games of the month was not an indie title or triple-a release of massive proportions and scale. Islanders from Grizzly Games certainly stood out from the lineup of that month’s releases as games like Katana Zero and Forager dominated the top charts. Not only was it a high score-based title, but on the surface, it did not seem like it had much to offer. Islander is a gem of a masterpiece that may provide players with something far more interesting than just a relaxing game: it harnesses enlightenment for those looking deeper into its core mechanics.

Islanders: Console Edition is a port of the original title Islander, a minimalistic casual infinite city-building game about surviving by creating until the player either inevitably screws up or runs out of space. After opening up an island for the first time, the game asks players to make one simple choice: pick one of two content packages to start with. Like other puzzle games and city-builders, the simple choice of whether you will start with a seaweed farm, a city tower, or perhaps even a windmill will have hundreds of ramifications. As a measly number of structures to place are added to the player’s inventory, the game instructs users to simply begin crafting their future.

The goal of Islanders is to surpass an objective score before the player runs out of structures — or rather “parts” to place. When passing the given score, players get to choose between one of two more content packs. If the player does not surpass the given score after placing their provided structures, the game ends and their total is uploaded to the online leaderboards. Eventually though, when the island starts to become full, players unlock the option to start a new expedition. Restarting from scratch puts you back to square one with your current point score, yet it is necessary as eventually the player is either bound to utilize every inch of space the map can provide or resort to the only option of escapism as they run out of parts.

It is technically possible for your score to continue forever by knowing when to switch over to new landmasses — which is ultimately the goal: to keep building. Due to the procedural generation of each island, the player is constantly arriving on new landmasses that provide potentially hundreds of possibilities. Every island has to be carefully utilized to their needs, but strategic enough players can bend the land to their will. Each part works on a proximity point system. To achieve the highest score, placing parts next to each other will have various positive and negative point effects. Knowing where to place your structures can lead players to a continual beat of expansion that will inevitably result in booming populated areas.

Visually, Islanders has a minimalistic style that helps players easily grasp the game’s different types of buildings and architectural landmarks. While it may be simplistic, the ergonomic design works in the game’s favor as it is almost impossible to confuse parts with one another. Each structure’s point information is displayed in the top right-hand corner of the screen while the player’s inventory is always displayed at the bottom. The heads-up display’s showcase of every piece of information the player could need culminates into an atmosphere that does not feel overwhelming but rather embracive of creativity. Despite its prospect to make you relaxed, Islanders asks players to think.

Outside of the main high score mode, Islanders offers two other features: a creative mode and photo mode — both are exactly what you would expect. The creative mode does not count to the online leaderboards as it has no scoring mechanic, however, it is definitely the most casual and freeform aspect of Islanders. In the iconic vein of titles such as Minecraft, It offers players the infinite liberty to design their own islands with an endless amount of resources and no penalties or obstacles.

Meanwhile, the photo mode that can be used in both High Score and Creative is a simple picture-taking method that removes the in-game heads-up display so players can take in the beauty of their creations. My only wish for the photo mode is that the developers would maybe add some filters or methods of changing up the game’s atmospheric conditions. Its presence was already unnecessary, but Grizzly Games could certainly expand upon the feature to make it more engaging.

The only serious gripe players may have with Islanders: Console Edition is the lack of precise control. Using a mouse and keyboard versus a controller is obviously a vastly different playing field. Islanders sadly is one title that slightly suffers when jumping from its home territory. Without a mouse, the exact pinpoint accuracy of placing buildings from the original release is at times frustratingly lost, however, this is not a massive issue. I would love to see Grizzly Games add perhaps touch controls with the game in the future on the Nintendo Switch’s handheld mode.

Even if the game adheres to a minimalistic philosophy within its gameplay and visuals, every aspect about Islanders coincides so well with each other. It was clearly not an experience designed to be a sweat-intensive brain teaser; rather, it was articulated to be something that will make you think ten steps in advance. As a game itself, Islanders is a potent moment of relaxation, yet it is hard not to think of the game from a deeper perspective.

The evolution of the island will ask players to think philosophically as the game only offers moments of quiet time as you witness a society bloom and perish. The ambient soundtrack and peaceful tone give players the atmosphere to really take in their work. After less than a half-hour, an empty landmass that holds its own beauty can become an overgrown city with no space for expansion. The only thing left to do after it has completely transformed though is abandon it and search for a new beginning.

Islanders: Console Edition is the perfect type of game to bring to more platforms like the Nintendo Switch. Even if its control scheme is slightly hindered at times in comparison to its original counterpart, the title is still as fluent and cozy as ever. Grizzly Games and Coatsink have done a wonderful job bringing the addictive city-builder game to more platforms. Islanders: Console Edition is absolutely another indie title that you should not leave this year deserted. For its current minuscule price of $4.99, there is no excuse for anyone with the slightest bit of curiosity to pick this one up.