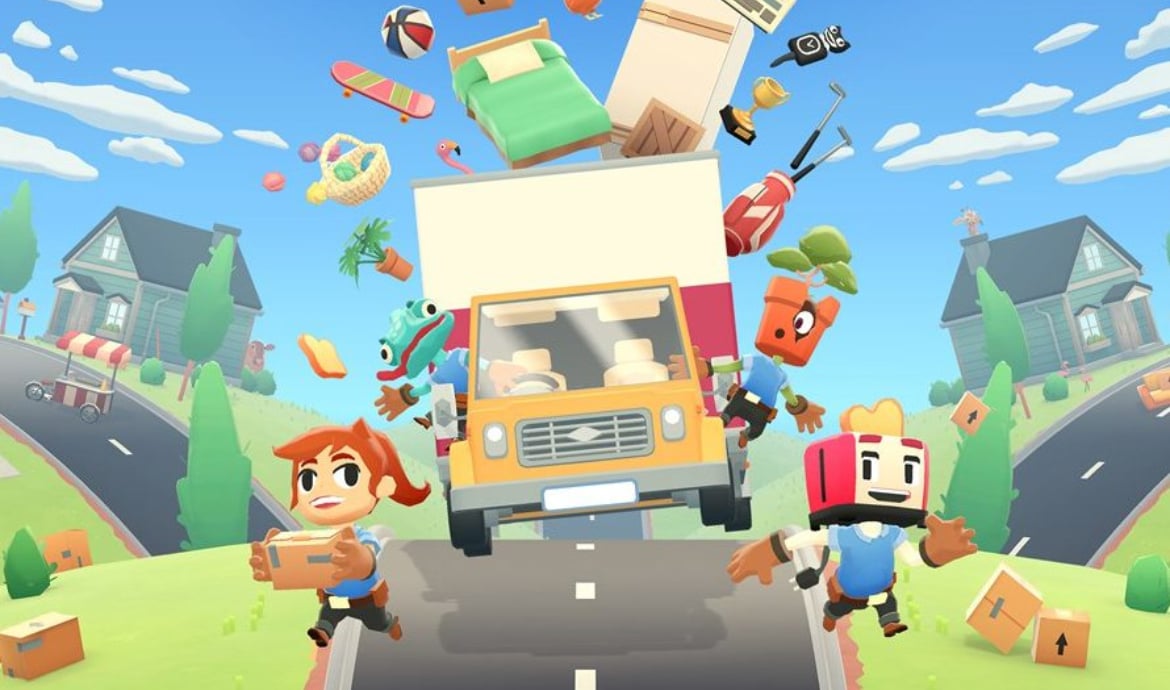 Moving Out is seriously the type of quarantine family-friendly chaos everyone should be indulging into while they are trapped inside right now. In the same fashion as other games such as Overcooked from publisher Team17, Moving Out is a cooperative multiplayer thrill ride with levels compacted into small intricate obstacle courses revolving around hilarious mayhem and essential teamwork that compliantly pays off. It may on the surface seem like a direct copy of many of its company’s and competitors’ previous outings, but that face value impression quickly vanishes once you really sink your teeth past the title menu. Its retro 80s inspired atmosphere piled on top of its tight yet absurd gameplay makes for a surprise that is well worth grabbing with a couple of your buddies or family to sit back and scream at each other for a few hours.

Team17 Continues to Crafts Argumentative Concoctions Like No Other Company

Moving Out focuses on one simple concept everyone experiences in life: helping someone move out of a place they call home- only this time you are coming from the perspective of a contract worker who probably should not have a job. As newly certified members of the Furniture Arrangement and Removal Technician- the acronym choice for the company’s rather sloppy behavior says it all- your job is to move a list of items onto a truck by either wreaking as much havoc as possible or sometimes being as “gentle” as you can. Under locked time-limit constraints and immense second-time pressure to cross off a quick list of tasks, working with a team of players can either split into being an easy cleanout or a questionably comedic slap in the face of a timesink.

Gameplay narrows down to simply picking up, dragging, or throwing objects from a building or structure onto a small truck. It’s a reckless fast on your feet race against the clock that never throws breaks at you. While you may start in a typical suburban four-room home, you will slowly move into areas as far as space and far off dimensions. It may come off as being simplistic and easy on the eyes, but Moving Out grows exponentially challenging as it constantly tests how well you can juggle your skills in a multitude of thought-provoking environments. Stacking objects in the truck, keeping space in mind, deciding which items you are going to tackle first and last, all of it culminates into a constant cycle of sheer cooperative panic and well-paced planning that sometimes just manages to outdo what has already been done before in the genre.

The best part about its ingenious structure is the fact that Moving Out never falls short of replayability. It certainly knows how to keep players engaged longer than Team17’s previous titles like Overcooked. The basic introduction of a time-rewarding system tied to unlockable sub-tasks for each mission will keep players coming back to each level on more than one occasion. Not to mention the promise of even more madhouse levels in return for completing as many tasks as possible will only fuel the fire for players to push on until they see that gratifying one hundred percent completion stamp.

Compared to other cooperative multiplayer titles from this publisher, what Moving Out brings to the table is a ton of unnecessary yet highly welcomed accessibility and customization options for players that will surely be clambered for in future titles from this company. Having the ability to craft characters to your personal liking and optimizing the way in which you play is simply leisurely and will put other developers to shame. You may start with only six characters with a wide variety of color pallets and hats, but that number exponentially continues to grow as you pack up more locations and set your ambitions to greater heights. Meanwhile, from an accessibility standpoint, the game feels more welcoming to players than previous Team17 titles as it throws way more general settings and control schemes at your face than before. It all feels as if the developers took Overcooked 2’s options, fleshed them out, and adapted them to considerable amounts of fan feedback- a benefit that all audiences will gladly stand behind.

Aspects of Moving Out that deserve to be highlighted are certainly the game’s sense of humor that never falls flat and its esthetics that never fails to please. Typically I find that when developers try and cram humor into these types of titles that breed laughs from the mere look of its slapstick gameplay it never really works out. Humor is extremely difficult to write, but Moving Out’s writers have managed to create a combination of a bombastic tone and dark implications for the workforce that pair excellently. The small text bubble speeches and transition quotes never feel forced and the one-liners will always give you a good chuckle. You know that the game is accomplishing what it strives to be when you are taking your time to read dialogue that you would naturally feel the need to skip over in just about any other game with the same premise.

The story and setting attempt to embody this interpretation of the 80s that never fails to please. Throughout the game, there are retro-looking infomercials and voice-overs that feel as if they were ripped right from a VHS tape from the time period. In-game structures and items are thematically appropriate as the player comes across cassette tapes, flashy conspicuous colors, big-box television sets, and even ridiculous advertisements. Its nothing new, but its always refreshing to see- especially when a considerable amount of detail and work went into creating these aspects that are done absolutely right.

The only complaints players will really have regarding Moving Out is how it continually fears to amp up the ridiculous aspects holding up the title, including its music score that can often sound too soft in several areas. There are plenty of levels with hilarious setups such as a moving plane over a highway or the slow kinetic black void of space, but the game really could have shown some skin in a few of the later sections. Presenting the player with even more challenging- or rather chaotic levels is genuinely needed at times. The atmosphere never becomes a complete slog too playthrough, but some players may find some of its settings rather repetitive and lazy.

The individual levels and music do have that topsy-turvy haywire feeling you would want from a game like this, but it really could be kicked up a notch. The music always inherits the synthwave and electric popular niches found in the music from the 80s that nicely coincide with the title’s consistent appearance, but it never grows to be as bumpy and fast pumping as you would hope amongst the chaos already at hand. From a company that has produced iconic soundtracks that play well off gameplay in series such as Overcooked, it just feels as if an opportunity was missing here. Nonetheless, the level design and music score are solid, but its a shame the developers did not over-dramaticsize or play some risks when designing portions of the already substantial esthetics.

Moving Out is simply diverting. Team17 once again provides the pinnacle of argumentative messes that end with only feelings of gratifying completion after hard success. It always retains that familiar feeling that other games in the genre consist of, but it manages to remain unique on its own due to its wildly ambitious esthetics and wacky concepts. It may not be the freshest or most original idea on the block, but it is a damn good departure from many other cooperative multiplayer games. It is really hard not to have a blast while Moving Out.

Team17’s Moving Out is now available on Nintendo Switch, PlayStation 4, Xbox One, Xbox GamePass, and PC.