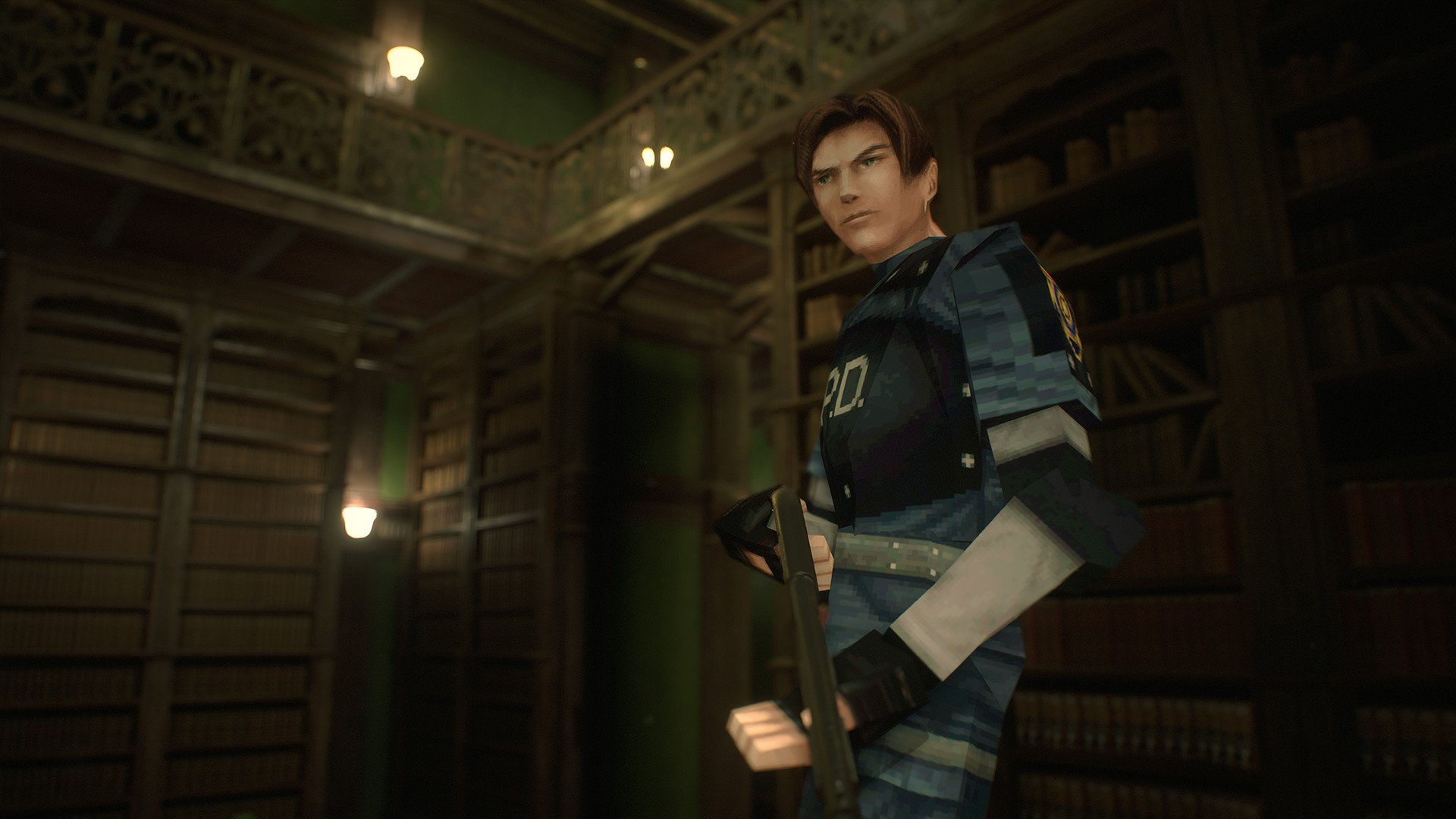 Resident Evil 2 and the Beauty of Storytelling

As a young film major back in 1999, a devotee to the precision of Hitchcock, the marvelous wonder of Spielberg (at least at the time), and the delicious wit of 40s noir and 30s screwball comedies, one of the last places I ever expected to find cinematic inspiration were in video games. By then the novelty of cutscenes had mostly worn off for me (though I was still impressed with the technical skill behind them), and I had begun to develop tastes for dialogue and plot that aligned more with the meticulous constructions found in screenplays or novels. Nevertheless, I have to admit that no single classic I’ve watched or read has had as much influence on my own writing as a video game. I experienced Resident Evil 2 on my N64, played from a bunk bed in a darkened dorm room as floormates huddled around, content to merely watch the horror unfold. Slowly creeping my way through the smoldering remains of Raccoon City, dodging packs of murderous undead while searching for clues amidst the gruesome aftermath that has taken place in the labyrinthine hallways of the Police Department, opened my eyes to environmental storytelling, narrative tools I had never before considered, and to that point had never seen so effectively employed.

Though I’ve loved them since first picking up an Atari 2600 joystick, and was often visually inspired by the fantastical settings and bizarre premises, as I grew older I turned to games less and less for my narrative kicks, less willing to forgive awkward dialog and disjointed pacing. Sure, there were a few memorable moments along the way, like the opera scene in Final Fantasy VI and a crazy ending involving Abraham Lincoln and George Washington as heavily-armed space soldiers, but even these examples, though certainly refreshing from the standard fare, seem only like window dressing for the button-pushing fun, nothing more than a break from the action or a fluffy reward giving closure for a job well done. Despite the advances made over the years, I still believe that the inherent interactivity in gaming ultimately makes the format ill-suited for storytelling (at least as I prefer it), and games like The Walking Dead, Gone Home, and The Last of Us have done little to change my mind. The main reason for this is how highly I regard pacing as a key factor in how audiences respond to the information being presented, and games simply aren’t able to control this very well, which can make even the rare dialogue that’s actually compelling still seem awkward and out of place.

Still, there’s something to be said for the way video games can create an atmosphere through allowing someone to explore a world at their own speed, piecing together a narrative like a detective on a case, discovering tidbits that might not directly relate to pertinent events but paint a picture of a larger world. Immersion is something any storyteller strives for, and constructing a believable environment that exists outside of specific plot points is a necessity for that. Certainly, this idea applies to any people featured, and for those who understand that they are not, in fact, the center of the universe, it’s helpful when a story acknowledges that the Sun doesn’t revolve around the main characters. To this end, writers are always encouraged to develop backstories for those who play even the smallest roles. What sort of lives have they lived? Do they have a job? Spouse? Kids? Siblings? An education? Friends? Religious beliefs? Were they bullied as a child? Do they play sports, and if so, which ones? What sort of music do they listen to, and why? The list can go on as much as someone cares to dig deeper. Details like this prevent what should be a fully-formed person from becoming a mere prop, and contributes to an authenticity that maintains suspension of disbelief.

Like many of the other games in the franchise, Resident Evil 2 is a mess when it comes to the main plot. Years later I don’t really remember all the twists and turns involving Leon, Claire, Ada, and William Birkin (I had to look that name up), and frankly, I don’t care. It’s fuzzy because I didn’t really care back then either. More than the particulars of those convoluted B-movie antics, however, what has in fact stuck in my mind to this very day are the contents of the various notes and files scattered about the wreckage, waiting to be read (the N64 version included even more of these documents, known as “Ex Files”). Written by citizens, soldiers, and everyone else in between, often in diary form as they realized they weren’t quite going to make it out of the horrific nightmare their mountain town had turned into, these jottings filled in a widespread catastrophe, depicting its disastrous effect on the lives of a community. From the regret of a bus passenger who wished he had written a novel, to the confessions of cowardice by a soldier holed up with his unit as they make their last stand, I was struck by the power each one of these had in conveying a broader sense of tragedy, how they let my imagination fill in the blanks of the wide variety of experiences that an event like this would surely generate, which in turn allowed the horror to slowly mature and solidify.

Without Dario’s Note, David’s Letter, Mercenary’s Diary, or the many others, the story of Resident Evil 2 would have still been trashy fun, but it would never have contained those ill-fated overtones, the kind that give real weight to a story about zombies run amok, a significance that lingers long after the jitteriness of jump scares and tense thrills has subsided. The backdrop that these files create provides a perspective from which to view the conflicts of Leon and Claire, and imparts a sense of urgency to their situation, as most would not want their plucky protagonists meeting similar grisly fates. While literally mimicking this approach in a screenplay isn’t exactly practical, their effect on me was profound, a potent reminder of the power of world-building and context. I always try to explore my own worlds a bit further now, adding moments and dialogue designed to support the themes and evoke the same sense of ecosystem.

Just as importantly, this idea also applies to settings. Time that could be better spent developing characters is often wasted on exposition – delivering a detailed explanation of circumstances and ideas through text or dialogue. Screenwriting ideally involves a “show, don’t tell” approach, but that can often be difficult when the writer feels they have a lot to explain, and they’re not confident in their vision. Early on in school, I would often fall into the trap of worrying about whether an audience could understand everything, then would proceed to make sure it was spelled out. This led to many boring scripts (some of which even I didn’t want to read anymore), and much time thinking about what I was doing “wrong.” Basically, though I had heard it many times, the idea that a picture is worth a thousand words hadn’t yet cemented itself in my brain. That would change after Resident Evil 2.

Keep in mind that I hadn’t played the first game (that wouldn’t happen until the REmake for the Gamecube), so this was my first introduction to a game with a fixed camera, and again, I was deeply impacted by the implementation of such. By carefully selecting each angle to convey precisely the information that the player is meant to see, the developers are of course better able to control the tension, building it with tight shots that have a narrow field of view (often obscuring what’s around the corner), and relieving it by pulling the camera back and letting us see our surroundings, understand where danger is, and have room to plan our escape routes. It’s very effective in getting the blood pumping, which I obviously appreciated (and still do), but it also allows the developers to construct a world where the details in each image have significance, a very cinematic notion. The Resident Evil games have all told much of their tale through the settings they take place in, but the static camera of the earlier entries is able to ensure that the environmental storytelling will not be passed by.

There’s no escaping the rampant destruction on display in the city sections of the beginning. Streets are a maze of automobile wreckage, including crashed emergency vehicles, hinting at the panic that must have ensued. Boarded windows and barricades indicate a hard-fought resistance. Smatterings of still-burning fires let us know that the horrific chaos responsible for what we’re seeing did not happen so long ago, implying that whatever caused it could still be a lurking threat (which of course, is true). Inside the Raccoon City Police Department, the initial emptiness of the main lobby shows just how alone we are, footsteps echoing into the abyss. Offices are a cluttered mess of overturned furniture and blood stains, but desks are still full of paperwork and cups of coffee, meaning whatever took place did so in a hurry. It’s reminiscent of a scene from Aliens, but the creeping pace of the game allows these observations to really sink in and fill in the dread.

For whatever reason, despite my having seen many brilliant films and played many amazing games up until that point, most of which do a perfectly fine job of setting their own scenes, something clicked with Resident Evil 2; never before had the power of these ancillary elements been made so clear to me. I still don’t consider the medium a great one for storytelling, especially as it applies to relating plots, but I learned not to ignore the other elements at play, such as the skillful ways of achieving immersion done better than possibly any other format. The potential is there, and maybe someday video games will figure out how to overcome their limitations and make their own Citizen Kane, but for now, because of Resident Evil 2, keeping an open mind about where my own inspiration can come from is a lesson I’ve never forgotten.