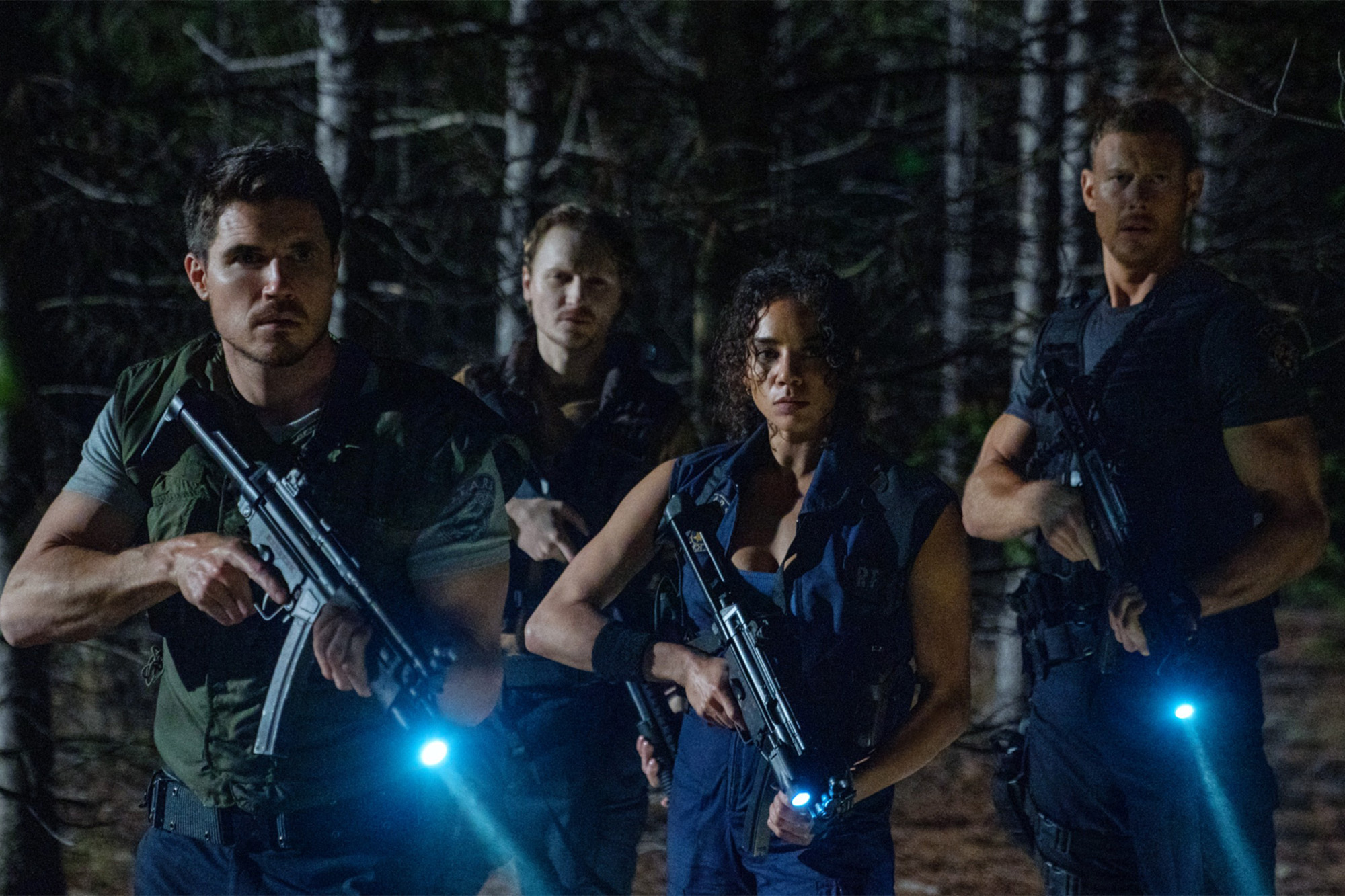 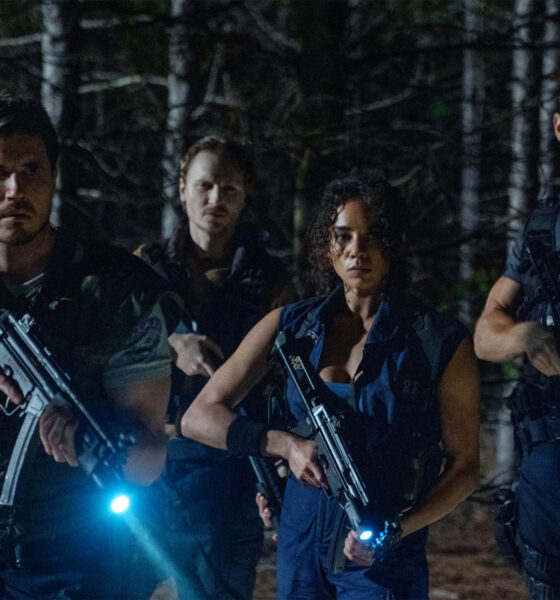 If you’re a fan of the CAPCOM games and have been jonesing to replay them, we’d suggest you just watch Resident Evil: Welcome to Raccoon City instead.

If you grew up playing the Resident Evil video game franchise by CAPCOM, then chances are that you were horribly underwhelmed when Paul W. S. Anderson’s Resident Evil hit theatres in 2002. Although it wasn’t a bad film—it was actually a pretty unsettling zombie movie with some horrifying moments scattered throughout—it didn’t feel like the games so many fans had come to know and love. This is why Johannes Roberts’ Resident Evil: Welcome to Raccoon City (2021) feels like a breath of fresh air.

The movie is essentially an amalgamation of both the first and second Resident Evil video games. The movie starts with us seeing Claire (Kaya Scodelario) and Chris Redfield (Robbie Amell) as children in the Raccoon City Orphanage, where Claire has been seeing a strange woman who watches her from the darkness of the dorm room. We then cut to the present day, with Claire hitching a ride from a trucker who’s taking her to Racoon City. The scene is almost identical to the opening of the second Resident Evil game, with the trucker even ripping into a greasy burger and driving his semi too fast through the pouring rain. As expected, he hits a woman with his truck but instead of her waking up and biting him, she ambles off into the nearby forest while Claire calms the trucker down. His dog is less lucky, and licks some of the infect blood off the pavement but he doesn’t turn into a zombie… yet.

Claire is then dropped off in town where she finds her brother, Chris, and we learn that she’s come back because she’s worried that the Umbrella Corporation has nefarious plans for the town. Chris is less than enthusiastic about her return (given she ran away from the orphanage when they were young and has been out of contact with him for the last five years) and her accusations about umbrella. As they argue, emergency sirens ring out across the city urging people to stay in their homes. Chris leaves to go back to the police station while Claire is left on her own, a pair of rabid-looking neighbours watching her from next door. From here the movie splits into two central narratives as Raccoon City slowly falls victim to the T-virus.

The first is Chris, Jill Valentine (Hannah John-Kamen), and Albert Wesker (Tom Hopper) going to the Spencer Mansion to figure out why two of their colleagues haven’t come back after they went to check on reports of a dead body. Their team gets ambushed by zombies, Wesker finds a hidden tunnel to an underground lab that opens up after he plays the right combination of keys on a piano, and both Jill and Chris are horrified to learn that Wesker is working with a secret organization to get dirt on Umbrella’s deadly research.

The other is Claire’s quest to find Chris after she’s attacked by two zombies (his former neighbours) while alone in his living room. She travels to the Raccoon City Police Department where she meets Captain Irons (Donal Logue) and Leon S. Kennedy (Avan Jogia) who have locked themselves inside the precinct after a truck (the very one she’d hitchhiked in) overturned and exploded in front of the station and where zombies are gathering en-masse outside the doors. The trio is forced to flee the station, make their way to the Racoon City Orphanage (where a Captain Irons is killed), and through its secret underground lab. We also learn that Claire ran away from the orphanage when she was a child because William Birkin (Neal McDonough) had attempted to experiment on her, but she ran away before he could.

From here, both narratives join into one, and we follow the group to Birkin’s secret lab where Wesker has killed him and his wife. Wesker is about to kill Birkin’s daughter too, but Jill shoots him and stops him in the nick of time. Unfortunately, Birkin injected himself with the virus before he died and he mutates into a giant monster, is killed, mutates again, and chases them as the group escapes on an underground train out of the city.

Resident Evil: Welcome to Raccoon City is arguably the best of the live-action movies. The cast does an amazing job of bringing some of CAPCOM’s most beloved (and hated) characters to life. Robbie Amell was surprisingly great as Chris Redfield, and Kaya Scodelario’s Claire felt like she came right out of the game itself. Hannah John-Kamen made Jill Valentine feel fresh and fun. While there are moments where she still feels like Jill Valentine from the games, John-Kamen made the character her own and it’s phenomenal. The same can be said for Avan Jogia’s Leon S. Kennedy, who comes off as a guy just trying his best on the worst first day of work ever. His version of Leon is also charming, painfully confused, and entertaining to watch.

The movie also includes some great references and callbacks to the gaming franchise. Jill refers to a “Jill sandwich” when she’s introduced to audiences, the rabid neighbour who attacks Claire writes “itchy scratchy” on a window in blood, and the keys Claire finds in the orphanage look like they came right out of the video game. Leon even kills the mutated version of Birkin with a bazooka, which he conveniently finds on their escape train.

The settings are also gorgeous and picture-perfect from the games. The mansion looks and feels just as foreboding and dangerous as it did in the first installment. There’s a beautiful scene with Leon sitting at the police reception desk and when the camera pulls back you could swear you were looking at a still from the remastered edition of Resident Evil 2. There’s even a scene where Leon goes to free a prisoner from one of the holding cells and it’s so visually similar to the game that you can’t help but panic that the Tyrant is going to break through the wall and kill him. Even Chris shooting zombies at the Spencer Mansion felt dynamic, with the screen pitch black except for Chris’ flashlight or a burst from the barrel of his gun.

This is also one of the few Resident Evil movies that felt sincerely scary (or at least as scary as Resident Evil felt when it was first released in theatres back in 2002). There’s a sense of dread that permeates the film and even though you know what’s going to happen (sort of) it still keeps you feeling nervous the whole way through.

Although the movie is fun to watch and does a great job of building suspense, the ending ultimately feels a bit anticlimactic. Resident Evil: Welcome to Raccoon City is a masterfully done zombie flick until the last fifteen minutes, where it suddenly becomes a speed-run to kill monster-Birkin and escape to safety. While there’s the threat of the city’s impending destruction keeping our heroes moving forward, it doesn’t have the same sense of urgency that them fighting for their lives against the infected did. The climactic battle between Chris, Claire, and Birkin is also over way too fast as Leon swoops in with the bazooka before the fight can even get started.

There are also a few shots in the film that feel like they’d belong better in a daytime soap opera than they do in a big-budget film. The most notable of them is a scene where Birkin is talking on the phone and learns that Raccoon City is going to be blown sky-high come the morning. It’s a deep-focus shot with Birkin staring into the camera while his wife and daughter are visible in the bedroom at the end of the hall basked in warm light. It’s such a strange shot and rips you out of the otherwise tense film.

Why You Should See It

Despite its slight imperfections, it’s an astoundingly fun movie that manages to be both fresh and somehow nostalgic. It does a great job of bringing to life beloved characters while also making them feel new. And while it’s a story we all know and love, it still manages to pack a punch and keep things feeling tense. If you’re a fan of the CAPCOM games and have been jonesing to replay them, we’d suggest you just watch Resident Evil: Welcome to Raccoon City instead.

Caitlin Marceau is an author and lecturer living and working in Montreal. She holds a B.A. in Creative Writing, is a member of both the Horror Writers Association and the Quebec Writers’ Federation, and spends most of her time writing horror and experimental fiction. Her collections, "A Blackness Absolute" and "Palimpsest", are slated for publication by D&T Publishing LLC and Ghost Orchid Press respectively in 2022. When she’s not covered in ink or wading through stacks of paper, you can find her ranting about issues in pop culture or nerding out over a good book. For more, visit CaitlinMarceau.ca.