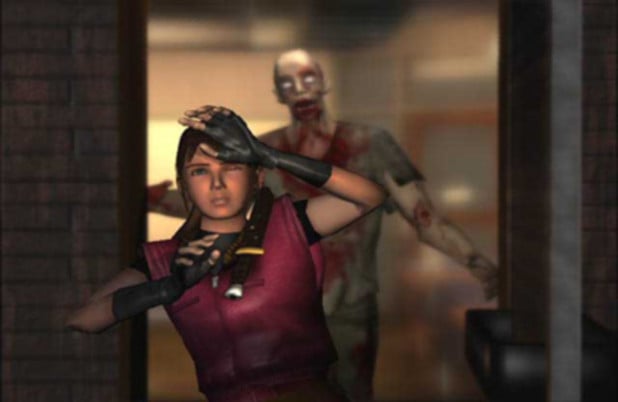 When Capcom first decided to bring their Resident Evil franchise to a Nintendo platform, the logical choice would have been to start at the beginning (a very good place to start) with the original mansion incident, the setting for a game that popularized the survival horror genre and spawned numerous creepy copycats. The saga of the T-virus was young, but already hard enough to follow, with characters motivated by mysterious pasts, greed, and various degrees of crackpottery, so a proper introduction would have been considered normal. However, apparently deciding that N64 players would have no problem being utterly lost when it comes to plot, being outsiders unacquainted with Redfields, S.T.A.R.S., Jill sandwiches, or the ominous Umbrella Corporation’s Frankenstein-like underground laboratory experiments, they instead ported over the series’ second entry, Resident Evil 2. Smart move.

As Leon S. Kennedy knows very well, being the new guy in town isn’t easy. You’ve got to win people over (or at least that one person who isn’t a zombie), as that’s the only way to survive in this zombie dog-eat-dog world. So for someone who had never owned a Playstation and was wondering what all the fuss was about over these clunky-looking “horror” games (like badly-textured polygons could ever scare me) with a static camera and cheesy dialogue, Resident Evil 2 was the perfect way for a rookie to get his or her feet wet. Better designed than its predecessor and lacking the laughably bad actors reading laughably bad lines of dialogue, Resident Evil 2 took the formula that the first game had created and ran with it, refining the gameplay to fit the N64 analog stick, offering a wider variety of environments, and expanding the dark, insidious plot with outstanding cutscenes and even more files littered about with spooky notes from the recently deceased.

At the time all those improvements would have meant nothing to Nintendo console owners, but the lure of the technological marvel that was FMV on a cartridge was too much to pass up back in 1999, and so I entered strange and unfamiliar territory, much like Leon driving into Raccoon City for the first time, unprepared for what lay ahead. Immediately having a protagonist I could identify with was a key element of my ability to roll with the game, as Leon’s confusion mirrored my own and we uncovered the mystery surrounding the events that rendered the town a zombie wasteland together. Had I understood the basis for this apocalypse the experience may have lost a certain mystery, a big part of what makes those early games such an eerie experience. We were both rookie cops at our first day on the job, with itchy trigger fingers. What Resident Evil 2 had to do was teach new players that sometimes they need to holster that smoke wagon, and it did so well.

Almost from the get-go, there were too many enemies and not enough bullets. Faster learners than myself quickly figured out that this wasn’t Contra, and running away like a coward was suddenly a pretty good option. Wasting an entire clip on one zombie left my Leon vulnerable, and he quickly succumbed to a bloody chomping after running down a dead end. It was disorienting at first, but the opening moments of Resident Evil 2 are so exciting that even those for whom the concept of conservation is foreign, they inspire a desire to see more. The original had a much slower, deliberate pace at its onset that may have turned off some who were unused to slow burns, but by starting RE2 with a bang, Capcom got Nintendo fans’ attention.

So that left wandering the smoldering streets and dilapidated police station looking for clues, piecing together what exactly was going on here, Claire every once in a while filling in some blanks about her brother. Resident Evil 2 introduced me to a whole new way of storytelling in games, where scripted breaks didn’t convey nearly as much as those little bits of diaries, newspaper clippings, and office memos. By adding additional files to the N64 version and doling out these scraps much sooner than RE1, the grim tones kicked in much sooner, drawing me into a universe with innocent citizens caught up in chaos, and perverted authorities scheming behind an entire town’s back. A wrecked bus that must be navigated on the way to the police station holds numerous corpses and the note of a man who knows his whole family is gone and is filled with regret about his choices in life. Moments like these sold me almost immediately and conveyed a sense of a rich, functioning world that very few games can.

What this all added up to after reaching the bitter end was that thanks to Resident Evil 2 suddenly I was a Resident Evil fan. Because of Leon and Claire I was inspired to try my hand at the mansion incident via the REmake, as well as pick up each of the sequels. Had I started off with the original, that may not have happened. Resident Evil 2 was better received than its predecessor and is still considered by many to be the pinnacle of those early games; what better place to jump into the series?

Capcom’s move could’ve been seen by some as a risk. Would there be enough interest in a sequel to a game most of the prospective buyers had never played in the first place, or would its release on Nintendo’s console be perceived as sloppy seconds, a quick way to make a buck off unsuspecting clueless dupes (in reality the port was given a high budget (for the time), and real care)? There’s no second chance at a first impression, but in bypassing the groundbreaking but very flawed original for this far superior sequel, the developer ensured that Resident Evil 2 would make sure the series didn’t need one.