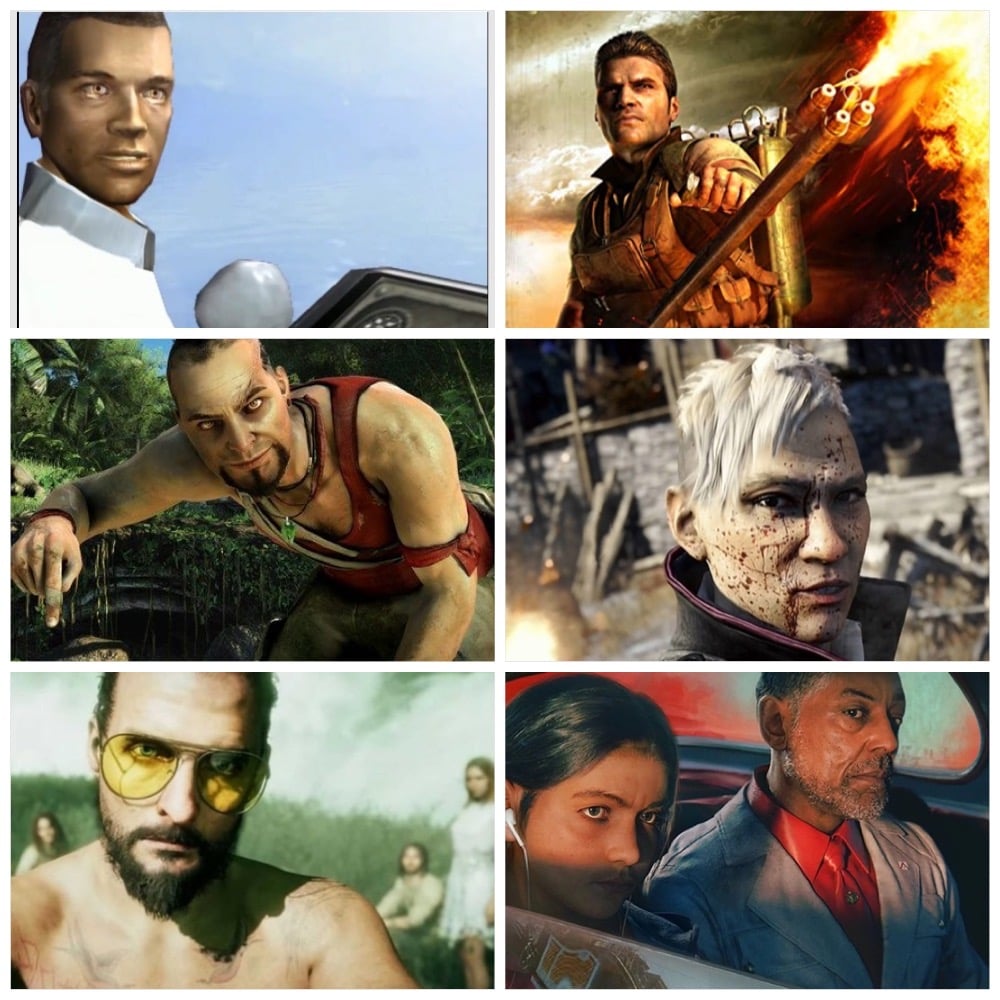 Unlike other Ubisoft titles, the Far Cry series has made a habit of putting its villains front and center. As a result of this decision, while the featured stories have never been anything to write home about, most of the villains have been nothing short of magnetic. Of the six mainline entries in the series, five have revolved around some of the gaming industry’s best antagonists, but the discussion of which one takes the top spot is still ongoing. This is our ranking for the best Far Cry villains from the six mainline titles.

SPOILER WARNING: This article contains spoilers for the main story of Far Cry 2, 3, 4, 5, and 6 ahead. If you have not finished any of these games (or 6’s post-credit sequence) and do not want to be spoiled, stop reading now! You have been warned!

Doyle’s relationship and interactions with Jack Carver make him a significantly greater villainous presence than Krieger throughout the runtime of the first game. By virtue of the era in which the game was released, Doyle’s unexplained arrival on the scene and knowledge of the island and its goings-on is something the audience takes for granted. The relationship Doyle builds with Carver makes the character unique in the series as it is one of the only times when the wool is pulled over both the player’s and the player character’s eyes simultaneously. Doyle’s act of betrayal at the end of the game recontextualizes all his interactions with Carver making him a good but not great Far Cry villain.

Villain motivation is one element of storytelling that has become somewhat tired throughout the entirety of the series, but Joseph Seed’s motivation still stands as unique. In a series full of fascist dictators and terrorist leaders, Seed’s religious zeal gives him a flavor of evil never before experienced in the franchise. Seed doesn’t have loyalists and followers by virtue of a seemingly unending war chest, but instead, those come as a result of a raw charisma, one that the player gets to experience firsthand several times throughout the game. While his look and dialogue are properly unsettling, Seed’s followers, particularly the “Seed family” of John, Faith, and Jacob, are what really make his specific brand of evil believable. Joseph’s interactions with the player become increasingly haunting as the game progresses, and the player learns of how he was able to convert his flock. The Christian take on religious evil makes Seed a top-notch video game villain.

With each new entry in the Far Cry series Ubisoft is seemingly able to attract higher-profile actors to play their villains, and no villain has been played by a bigger name than Giancarlo Esposito. Esposito is able to inject so much malice and unprecedented anger into the Far Cry 6 villain Anton Castillo that his commanding presence left me wishing there had been a way to surrender and join Castillo’s army. Not only is Castillo’s domineering presence felt in all of his scenes, but the dynamic he shares with his son Diego on screen makes the character the slightest bit vulnerable. Castillo’s vulnerability makes his monstrosity that eventually leads his murdering Diego, a disturbingly strange but melancholic sense of depth, one that solidifies Castillo as a great, but still not the best, Far Cry villain.

Following up a villain that was nearly unanimously loved and adored was no small task, but Troy Baker and the writers of Far Cry 4 were up to the challenge. Where his predecessors were threatening and ominous, Pagan Min leans further into an eccentric and unsettling direction. From the moment the player meets Min, he appears to be in a constant push and pull between an unrestrained rage when killing one of his soldiers and a contagiously positive outlook on life. The image of Min with blood on his face as he embraces Ajay upon their first meeting perfectly encapsulates the character’s internal duality. Pagan’s exquisite fashion sense, nearly constant interactions with Ajay, and visible struggle to restrain his more animalistic rage, easily earn him the number three spot on this list.

Of all the villains in the Far Cry series, The Jackal is the only one that seems as though he doesn’t see himself as the story’s antagonist. Not only does The Jackal not see himself as the villain, but he also treats the player as a peer and even a friend at times. The Jackal is a firmly principled character without allegiances to either of the games larger organizations, the APR or the UFLL. His consistent belief in and, to an extent, assistance to the player shows that The Jackal is aware of his role in the larger machine and has a goal contrary to the larger forces in the story, a goal for which the player could be a genuine ally. His dangerous yet authentically friendly demeanor combined with his awareness of his role in the game’s central conflict and the recent confirmation that he is the first game’s protagonist Jack Carver all culminate in a Far Cry villain that is second only to one.

Back in 2012 Vaas rocked the minds of gamers everywhere by simply describing the definition of insanity. While some would argue that this landmark speech has become more ironic than iconic there is no arguing the raw magnetism that Vaas brought to the series. Vaas’ feeling of authentic insanity was brought to life by Michael Mando in such an intensely realistic way that the audience has been clamoring for more of ever since. Vaas brought a radically charismatic and unpredictable violence to the story that made him the star of any scene he appeared in. His anger and thirst for intellectuality constitute great writing, and when combined with Mando’s top-shelf performance Vaas is undeniably the best villain of the Far Cry franchise.