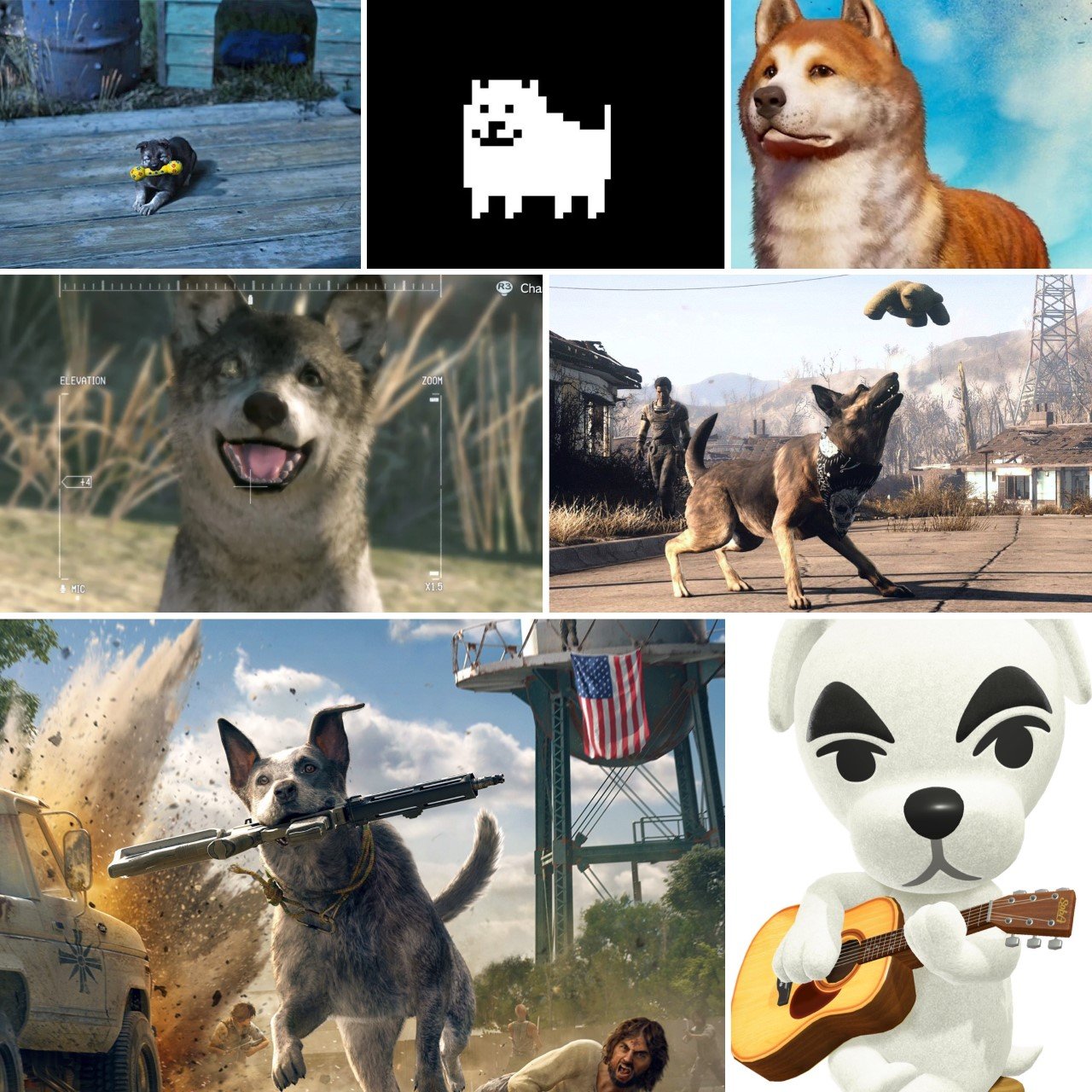 Today is National Puppy Day- (a day which should seriously be up there with Christmas and Easter)- and what better day then to take a look at some of my personal favourite good boys and girls from video games. Let’s be honest, dogs and puppies make everything better and this extends to gaming as well as reality.  When I get a dog in a game that is both cute and capable, I know that is going to be my only companion for the rest of my playtime. Let’s have a look at just a few of these cuddly comrades.

Dogmeat and his ancestors appear throughout the Fallout series and he makes for a super cute companion as well as a handy ally. Dogmeat will fetch various useful items for you if you recruit him in Fallout 3– such as ammo and food- but unfortunately he can die if he gets injured in battle. If you are anything like me, you’ll find yourself reloading your saves back all the time to pretend like that definitely did not just happen. The “Puppies!” perk in Fallout 3 allows you to collect a new puppy companion outside of Vault 101 if Dogmeat falls in battle. Honestly, even with this perk I still reload my saves. I couldn’t bring myself to go on with another as if nothing had happened. The good thing about Dogmeat in Fallout 4 is that he can’t die and you can also give him armour and cute little accessories like neckerchiefs and goggles. The bad thing about Dogmeat in Fallout 4 is that he will get in the way constantly and probably lead to your grisly death on numerous occasions because he won’t move one inch to the left. Totally worth it.

Basically a robotic Dogmeat, Rex is the beloved pet of a gang leader called The King in the Fallout: New Vegas spin off game. In a side quest, The King will task you with getting his robo-pooch fixed as the wires in his brain are going haywire and making him a sad pup. I’m certain that is indeed the technical terminology for the situation. If you succeed, The King allows you to keep Rex for yourself and then you have a cyber dog companion. Definitely a side quest worth undertaking.

Much like Dogmeat, Timber and Boomer are useful allies to have in your adventures (Boomer in Far Cry 5 and Timber in Far Cry: New Dawn) as well as super cute good boys. They’ll ride along in the car with you, bring you guns, bite enemies in the face and- of course- they are there for all of the necessary pets and head scratches. If you’re anything like me then once you’ve unlocked them as allies, there will be no need for any of the other ally characters. Why would you when you have these beautiful boys on your side? There’s also a dog ally appearing in the upcoming Far Cry 6: a disabled dachshund with wheels who carries ammo for you in a little ammo pouch attached to those aforementioned wheels.

His name is Chorizo. I haven’t even met Chorizo yet but if anything happens to him, I will kill everyone on this planet and then myself.

As his name suggests, this little dog is quite the annoyance in Toby Fox’s indie smash hit Undertale. However, this doesn’t make him any less loveable. From interfering during battles to stealing the bones from Papyrus the skeleton, this little white menace likes to cause problems on purpose but it’s impossible to stay mad at the cheeky little cutie. He even has his own theme music which is an odd combination of cute and irritating, much like the pup himself.  He’s not the only dog in the game either. Two guard puppers who are madly in love- Dogamy and Dogaressa- are also highly adorable and you’re literally an evil, heartless menace if you did not spare them.  There’s also the “Lesser Dog” character who you can keep petting until his neck ascends to heights unknown to man. These good boys and girls are all precious and must be protected at all costs.

Another helpful boy who is also a major cutie, Riley is a German Shephard and is part of the Ghosts squadrons in this game. Riley is able to act as a sniffer dog during the missions with him and also- you know- bite them in the nether regions. He can be remotely controlled at certain parts of the game too, making him the first playable pup on this list. The most worrying thing about Riley when he was first being marketed for the game is that the Internet was terrified that he was going to be killed off. What better way to emotionally manipulate your players then by getting you attached to a canine companion- even letting you play as them- only to kill them off unceremoniously? Thankfully, Riley survives the events of the campaign but he does take a bullet to the leg in the process. A brave boy as well as a cute one it would seem.

Jack’s appearance in the zombie game Days Gone is quite brief but it was so adorable that I had to include him here. In the “Have It Your Way” mission, player character Deacon can save a Norwegian elkhound puppy from the “Freakers” (the zombies). You then give him to your depressed friend Boozer and a beautiful friendship is born. They name him Jack and you can then gift him various dog toys that you find in the world. This may be a small moment but it’s so sweet.  I can tell you that I would one hundred percent die for Jack in a heartbeat.

This one really got to me when I was younger and played this game for the first time. Your nameless dog companion in Fable II is with you from childhood and you can level up his abilities- such as searching for treasure or damage during combat- by finding and reading certain books scattered through the game world. You can also teach them tricks and their appearance will change depending on whether you choose to be good or evil (spoiler alert, they stay adorable no matter what alignment you are). DLC allowed you to change the breed of your dog into a Husky, Dalmatian, Bloodhound or the original Mutt breed from the games start. At the games conclusion, your canine companion will sacrifice themselves for you. You then have a pretty horrible choice to make: bring back the lives of those who died thanks to the actions of the in-game bad guy; take a ton of riches for yourself or only bring back the lives of those you love who have died including your beloved pet. I still remember all those years ago sitting at the choice screen for about five minutes. I’ve always been a goody two shoes when it comes to decisions in games so the gold was out of the question. Should I bring back my puppy or all those lost lives? It doesn’t sound like a hard choice to make but when you’re faced with it, it really got to me. But then I found out there’s kind of a cheat to get him back anyway without any consequences. Damn you, meaningless decisions.

KK plays guitar and he sings and he is a dog. What’s not to like? Isabelle is just too pure for this world. You know what? How about I change this to ALL of the dog characters from Animal Crossing over the years? They are all adorable and deserve all of the pets.

A tactical genius with a spiffing taste in armour, Caesar is a commander in the strategy game Wargroove. Despite being a dog, he is a surprisingly efficient commander who is able to control whole armies in the Cherrystone Kingdom. Now if that’s not a good and special boy, I don’t know what is.

D-Dog- or DD- is another super skilled, recruitable character who just so happens to also be a cute doggo.  You find him when he is a lonely, one eyed puppy and you can choose to take him back with you. I don’t understand how you could just leave him there though so it doesn’t feel like much of a choice. You can keep visiting the pup when you return from missions on the helipad but eventually he will grow into an eye patch wearing savage. He is incredibly useful in terms of gameplay too, marking enemies and resources as you undertake missions with him. He can be levelled up as well, learning how to attack enemies and lure them to you as he grows.

From an adorable puppy to a badass- though still adorable- partner. They grow up so fast.

Chop is becomes the pet of one of the three Grand Theft Auto V protagonists- Franklin- in the 2013 GTA title. He gets his own mission where he helps you chase down some gangsters but his behaviour is…less than acceptable at times. I’m leaving it at that. This misbehaviour means that the more you train him via the games accompanying app, the better behaved he is. It also means he will stop pooping everywhere which is more than a little annoying, but we love him nonetheless. Take him for a walk or play some fetch with him but be careful as his AI isn’t always the brightest and he might end up throwing himself in incoming traffic.

Rosie is a special doggo as the player can choose to use her to help the playable character Clementine get over her fear of dogs, which is a nice touch as this could easily be a relatable problem for some players. She becomes a companion to Clementine and AJ and- thankfully- manages to survive to the end of the series. Thank the lord. I was ready to riot otherwise. Rosie is not only an adorable pit-bull (it’s also good to see the developers choosing a breed that can often have a bad reputation despite how loving they can be) who you can develop a bond with but also a fierce murdering machine when it comes to zombies and bad guys. She saves you several times in the game because she is the best girl who deserves all of the loves and kisses.

Alice: The Last of Us: Part II

Yeah, you know what? Let’s just skip this one. My heart can’t take it.

Nope, not this one either. I do not want to cry about this again.

LOL, just kidding. Can you imagine? This is literally the only dog in video game history that is collectively hated by the gaming community. Screw you, Duck Hunt Dog. At least Super Smash Brothers Ultimate gave us a chance to get our own back.