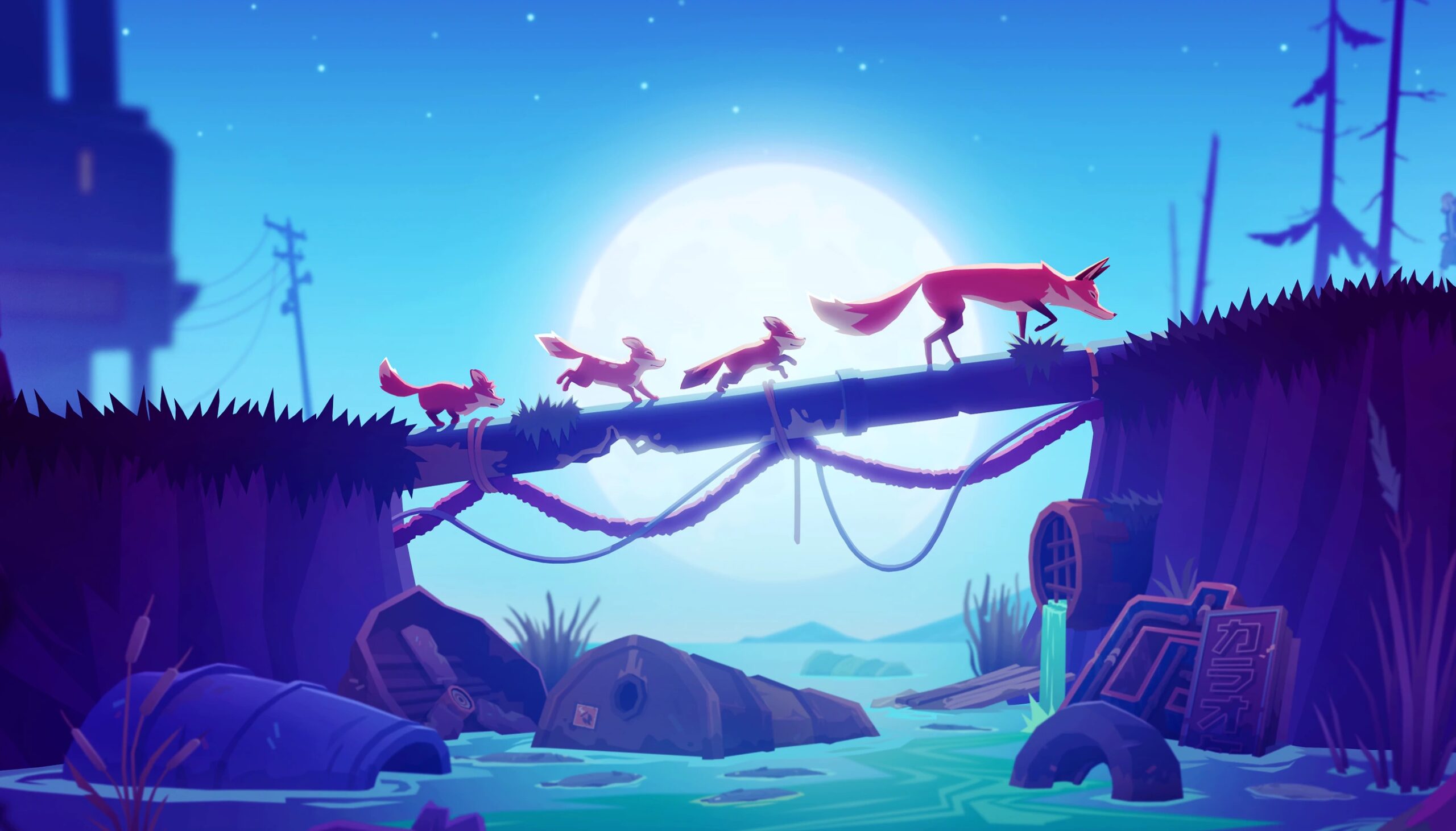 Foxes are one of nature’s most incredible creatures. Playful like dogs, sleek and curious like cats, they exist as the woodland critter most likely to lift your spirits at any given moment. They tend to show up in video games frequently, often as playable characters, like in Spirit of the North. But in Endling – Extinction is Forever, the player must do their best to ensure the survival of an entire fox family. This may sound like a quaint and low-key experience, but it is, in fact, incredibly stressful and leads to some harrowing and intense moments. Beautifully animated and designed, Endling – Extinction is Forever is a thought-provoking and powerful fable on the importance of preservation and environmental protection.

Endling feels like a forceful repudiation of the trend of “cozy games” featuring cute animal mascots. Yes, the fox protagonist is undeniably cute, but the game does not allow players much chance to linger on this. From the moment the game starts, the stress is palpable. The intro, where players are introduced to the main mechanics of climbing ledges, digging under obstacles, and running down alternate paths, is set in the midst of a devastating forest fire. Creatures flee the flames, throwing themselves over cliffs, and it is only by chance that the fox survives after falling off a ledge and onto a pile of trash. After a speeding truck barely misses her crossing the road, she limps her way into a makeshift lair to rest. Only she doesn’t rest: instead, she gives birth to four heartbreakingly adorable kits. Life continues on, even in the midst of chaos.

The pacing of Endling – Extinction is Forever is breathless. There are few, if any, moments of respite in the early game. Mere minutes after the birth scene, one of the fox’s cubs is stolen out of her lair and captured by a scavenger. As the game continues, mama fox occasionally catches the scent of this lost pup, and by following her nose will come across clues of the baby’s whereabouts. Every night in Endling follows a similar structure: round up the remaining cubs, exit the lair, and explore the surrounding areas. The clock is always ticking down, and if the cubs aren’t fed constantly, they will die. There is often not enough time in a given evening to fill the babies’ bellies and follow the latest clue; making difficult choices is baked into Endling’s DNA.

Exploring the map is a quiet triumph. Endling‘s fox moves in 2D, but the environment is in well-rendered 3D. Players travel along a path and can run down different forks in the road to uncover additional areas. After helping an ornery badger and her cub, there is even limited fast travel through their burrows to quickly make it from one part of the map to another. The art style is beautiful, and the camerawork feels utterly cinematic, drawing players into the world with an inventive mix of artistic expression and hard-edged reality.

While not exactly a simulation game, Endling takes its survival elements seriously. The newborns are basically helpless, at least at first. Every night, players explore the surrounding landscape with all three baby foxes in tow. Mama must find food for the kits, plucking berries off of bushes or pouncing on rats after sneaking up on them. Hunger is tied to a shared meter for all three cubs which is constantly draining. If the meter empties, cubs will slowly starve, one at a time. Seeing them realistically whimper, shiver, and crawl more and more slowly is heartrending and all the motivation players need to scrounge up enough food to keep them satisfied.

When a cub dies in Endling – Extinction is Forever, their absence is felt. They no longer tag along on nightly sojourns; they no longer exist in the lair. After losing a cub, players are confronted with their failure every time they load up their save file and see fewer baby foxes in the lair. Finding the kidnapped fourth pup feels of paramount importance but keeping the other three siblings alive provides plenty of reason to soldier on. To do this, players have to keep pushing themselves, exploring the map and expanding the boundaries of their search as often as possible. By following hints on the map, depicted as yellow question marks, players can eventually find new lairs to safely sleep in and uncover additional story beats.

Additionally, the more players explore, the greater the chances of survivability improve for their cubs. Stumbling into certain areas will allow each kit to learn unique skills to find more food, like squeezing through a narrow opening to grab some mushrooms or digging in soft earth for grubs. One cub can even learn to hunt prey on their own, so the mother fox doesn’t have to spend as much time tracking down dinner. Once the cubs learn a few skills, tension is lightened considerably as players can worry less about where their next meal is coming from, but be warned: skills can be difficult to find. And even after mastering a few cub skills, just because the kits are less likely to starve does not mean Endling is any less danger-free.

After filling out the map and following enough scents to find clues of their lost pup’s whereabouts, the player starts to run into humans. While some are kind to the animals and a joy to interact with, most others are cruel and will hurt the vixen and her litter on sight. The furrier in particular is a terrifying menace who starts to hunt the fox family with tenacity the longer the night goes on, forcing players to flee to a lair or find a way to distract them before being caught and killed. At every turn, the world feels hostile.

The humans in the story are generally dangerous, but as Endling goes on, certain themes become apparent. There is a creeping sense of horror as the environment changes over the course of the game. The ironically named Care Corp, seen as a massive manufacturing plant dumping trash in the river, has displaced animals and even people in a world that is rapidly dying. Every night, more trees are cut down and garbage piled up. Endling features environmental storytelling at its most literal, as the surrounding landscape is gutted and modified. It is infuriating, watching a beautiful forest turn into nightmarish landfill over just a few hours of gameplay. The player feels helpless, simply doing what they can to keep the fox and her family alive. They cannot affect change on the world at large.

It is difficult not to be affected by the story beats of Endling. A massive corporation employs dozens if not hundreds of people who are actively destroying something beautiful and natural, with immediate consequences. Yet Endling never feels preachy; the foxes do not talk or wax philosophical about the destruction of their homes. Even the scavenger, the furrier, and other unnamed refugees the player encounters throughout the story do not have dialogue of any sort, though there is some pointedly aggressive graffiti (“Oxygen is a right!” and “Silence Failed” feel especially poignant in the face of devasting climate change and recent political inaction). There are no fourth-wall-breaking moments where the game berates the player. It is to the game’s credit that it presents deforestation, the pollution of natural resources, and yes, extinction as a simple consequence of living in a society devoted to capitalistic ideals. The entire experience is heavy, along the lines of This War of Mine or Papers, Please more than anything else. Gameplay is satisfying, but rarely fun in the traditional sense.

Endling – Extinction is Forever is hardly a feel-good time, but it is still extremely compelling down to its final moments. Players who are turned off by ticking-clock mechanics or animals in danger will likely find Endling to be the most stressful experience of the year. The finale is predictably crushing, though perhaps not for the reasons players expect. While the game tells the tale of resilience in the face of impossible hardship, it also serves as a damning indictment of how mankind uses up environments and people for the benefit of faceless corporations.

There is a special thanks in the credits of Endling extended to Fumito Ueda, director of ICO and Shadow of the Colossus. Game enthusiasts who have played either of those titles will find a lot of similarities with this one. A sense of melancholy and loss is right on the surface, and the gentle, specific animations of peaceful creatures says more about their personalities than any canned dialogue could. Endling serves as a stern reminder that we share this planet with other living beings and that we can always do more to thrive together.