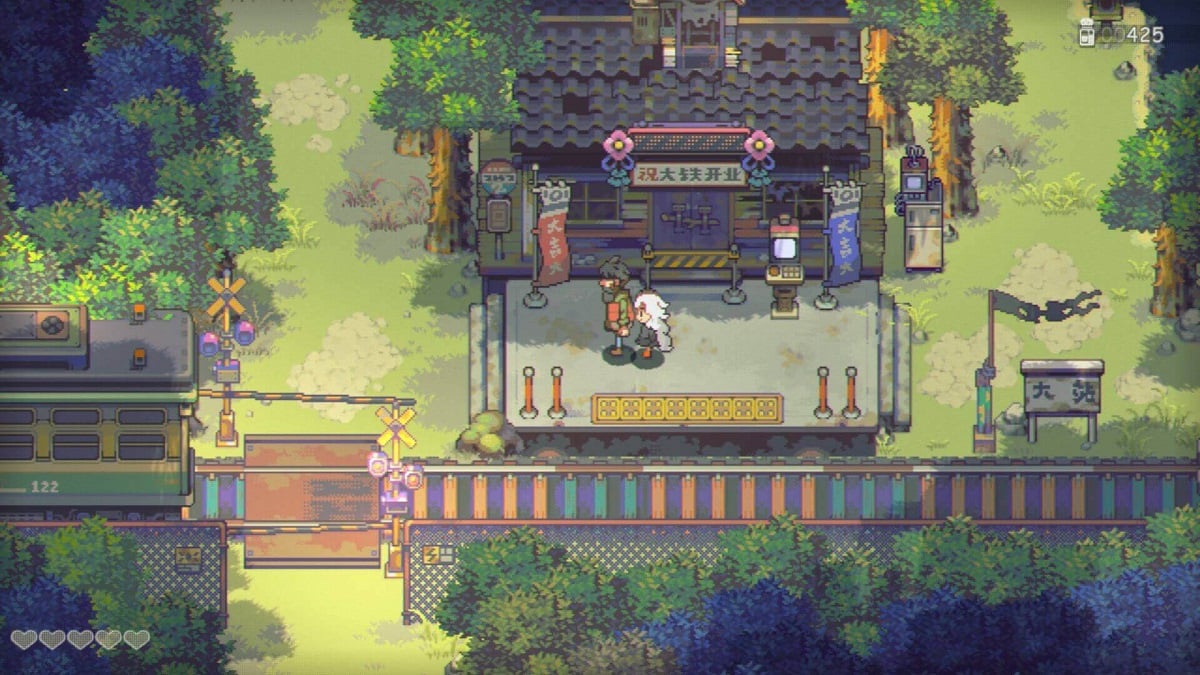 Eastward is a great big video game buffet. It looks delicious from afar, but as you get a little closer, it becomes clear that a few of the dishes are suspect. How long has that shrimp been out? But that big weird meal is still enjoyable, and it’ll likely have you coming back for more.

Overplayed metaphors aside, Eastward is a video game that is bursting with ideas, some of which are great, some of which don’t work, but all of it is well worth a look if you admire the style and have a patient heart.

Developed by Pixpil Games and notably published by Chucklefish, Eastward is a pixelated adventure that tells the tale of big silent lug John and the plucky and mysterious psychic girl, Sam, as they battle their way towards the truth behind their very existence. They swat bugs and baddies with frying pans and psychic blasts while exploring various post-apocalyptic catacombs and quests.

It’s a story about friendship and family set against elements of Earthbound and classic Zelda. Despite its monolithic influences casting a long shadow, it still manages to carve out its own identity, though it is not without its extremely clunky bits.

Eastward is doing one thing best of all: it looks exquisite. Pixpil’s greatest accomplishment is the marvelously well-executed pixelated art style, and in a land that is by now well-populated by pixel art, this is no small pile of pixels. The apocalyptic grime and overgrown grit shine in Pixpil’s detailed homage to games of yore. The character designs, in particular, are hard not to marvel at, with each inventive animation cycle bringing to mind greats like Metal Slug and Street Fighter 2.

The game is so beautiful, in fact, that it kind of makes up for a bevy of other flawed, if admirable, undercooked elements. Questionable ingredients emerge early, as even among the beautifully drawn subterranean landscapes it is sometimes unclear which way you can actually go. The problems pile up like bacon at the buffet.

Do you have a fever with a prescription for more cutscenes? Then you’re in luck, Eastward has got you covered. There’s a lot of dialogue in Eastward, and a lot of it amounts to very little. Its tone and world try to pull from the off-kilter playbook of the greatest of all, Earthbound, but it misses and meanders.

There’s even a game-within-a-game called Earth Born (which oddly enough plays more like Dragon Quest). Here and there Eastward hits the right flavor, but when you’re borrowing from the best recipes, you’d better be nailing it, and Eastward doesn’t. The lead protagonists are certainly worth caring about, but their journey wanders aimlessly like their conversations do, littered with jokes that don’t land and cutscenes that don’t quit.

If you’re hoping that that’s all broken up by fun battles and rewarding puzzles, I have some bad news on that front, too. With the exception of some rewarding boss encounters, the combat is pretty one-dimensional, even when players are finally allowed to switch between the two leads or when new elements are thrown in.

Ditto for the puzzles; they range from “somewhat satisfying” to “hitting switches,” and all of this is drawing from top-down Zelda games, which once again leaves a bad taste in comparison. The sum of it leads to an overall sense of bad pacing, and you’ll often wish that a dungeon or a conversation were shorter.

Still Worth A Look

And yet, if it looks like your cup of pixels, Eastward has a winning way. It’s clear that the developer’s best-used ingredient was love. And sure, they poured most of their love syrup into the stunning visuals, but the clunky aspects aren’t so bad that they make the game unplayable; I was always left wanting to see more.

Moreover, Eastward is sprinkled with a bounty of fun little extras. The aforementioned side game, Earth Born, is legitimately entertaining, and its story does a better job of not taking itself too seriously than that of the main quest. You can collect baubles for power-ups for that game, there’s a nifty little cooking mechanic that incorporated well, and much of the synth soundtrack is actually great. It all adds up to a really solid experience on the side.

It must be said that if you come to Eastward never having played any of its most dominant influences, remedy that first. But if you’re giving it a look as a lover of Earthbound and classic Zelda titles, and if your expectations are in check, you should go for it.

There’s much to complain about in Eastward, but this is largely because it’s inches from the greatness of its influences. If the gameplay and pacing had matched its visual style, we’d be looking at a classic fit for generations to come. As it is, it’s a fun and interesting homage by a company that is well worth keeping an eye on.