Duelyst is an online free-to-play collectible card game (or CCG) made by Counterplay Games. It’s built mainly out of spare parts from Blizzard’s Hearthstone, but Counterplay has avoided being the Hi-Rez Studios of CCGs by adding a grid upon which the game’s matches are played—in the vein of XCOM, Final Fantasy Tactics, and so on—to set their game apart. 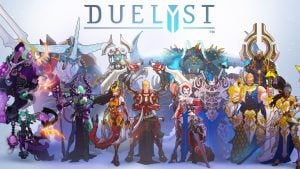 Duelyst pits you against player opponents with each side wielding a general. That general’s corresponding deck is constructed from cards in your general’s faction and ‘neutral’ cards which any deck can use. Cards fall into three types: minions, spells and artefacts. There are currently six factions, each with two available generals.

When playing, you and your opponent’s generals are placed on either side of the gridded pitch, and take turns moving your generals, and through the expenditure of mana, summoning minions to fight alongside you, casting spells with a whole host of effects, and equipping your general with artefacts. Seeing the Hearthstone similarities yet? Fortunately, Counterplay’s addition of a grid does go some of the way to not only setting it apart from previous CCGs, but also some of the way to undoing some of the serious problems preventing older CCGs from really being games of skill. More on that later. 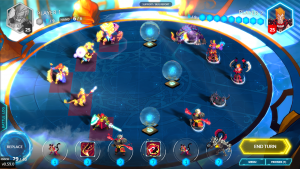 Duelyst is a deeply flawed game for numerous reasons, but before ragging on it, the good points should be noted. The cards themselves are well balanced, which is more than a lot of other CCGs can say. There are a few bland filler cards that no one uses, but generally most all cards have a place, and no card is so obscenely imbalanced that it renders all other cards of a similar mana cost pointless. Counterplay Games should also be praised for its challenges, where you must use a predetermined hand and field to beat a general in a single turn. These challenges tutor players well in tactics, and Counterplay Games puts a new one out every day, which shows a real understanding of how their game works, and breaks the embarrassing precedent set by Hearthstone.

The pixel art is a quality job. Each minion has its own appearance, and its own walk, attack, and death animations, while each spell and artefact has its own animation as a card. Furthermore, all the faction cards manage to conform to a design and colour scheme that clearly reflects their allegiance while still each having a unique appearance, which is a feat in of itself.

But that’s all that’s good about Duelyst.

Let the Bodies Hit the Flaws

The ranking system, which determines the supposed level you’re competing at, is bogus. Consecutive wins accelerate the rate at which you increase in rank, but consecutive losses don’t accelerate the rate you decrease in rank, meaning on a mediocre 50% win rate, provided you play enough, you’ll keep going up in rank. That’s not how ranking should work. Someone who wins 50% of the time should be of middle rank.

Secondly, there’s a real lack of visual design consistency. The menu screens are rather bland digital fantasy landscapes painted in pastel, the loading screens are almost anime characters, and then the aforementioned pixel art is what’s seen in-game. On the subject of aesthetics, the music is painfully bland, sounding like the soundtrack to a Michael Bay movie trailer being played in the next room.

Duelyst also has the problem of its system of collecting cards handicapping newer players, something too complex to elaborate upon now and so is discussed here in full detail.

However Duelyst’s biggest problems are inherited, genetic illnesses gestated in ancestor analog CCGs like Magic: the Gathering, passed down through parent videogame Hearthstone. The inherited problems are two-fold, and both damage the value of skill in the game: Counterplay’s system of monetizing their game, and how the game interacts with RNG.

One Monetisation Under God

In Duelyst you can acquire ‘Orbs’, the game’s version of booster packs, which contain 5 random cards of random rarity, either through trading in-game currency ‘gold’ or by paying real money. If you have real cash to spare, you can get a lot more Orbs than someone only buying with gold. This monetization system that so many CCGs use is despicable. It negates the problematic impact of RNG on determining how many synergizing cards you have at your disposal by exchanging it for the even more problematic favouring of wealthier players. Those with wider wallets can buy as many packs as they need to enable better deck building with more synergizing (and in a few unbalanced cases, simply superior) cards and get a notable edge over the poorer competition. Excuse me. I play games to escape reality, not be confronted with microcosms of class warfare. And what’s the point? It’s a hollow victory for the wealthier player and a miserable time for the poorer one. Player success in a game should be a reflection of player skill, not wealth, a quantity completely abstract from the game. Would people be just as apathetic if player height had an impact on player victory? It would be just as arbitrary. The game’s balancing goes some of the way to helping alleviate the damage of this monetization, but inevitably some cards will work with a deck better than others, and the more Orbs you can get your hands on, the more likely you are to get those cards.

Counterplay has further pulled a wide range of miserly stunts we don’t have time for, but reddit user ArdentDawn has written quite the polemic. To give an idea of the level Counterplay Games is on: at certain milestones you are rewarded with mystery crates, containing cards and cosmetic items, but you have to pay real money for the key to open them.

There is something else we first must elaborate upon before we can discuss the problems of RNG. Duelyst presents players with such a range of choices, as all the popular CCGs do, that it creates the illusion of being largely a game of skill. When you have to choose the cards in your deck, the cards you play, the order you play them in, what cards they impact with their effects, and so on, such a range of choice gives the impression that those choices are significant to the game, that all these little strategic decisions add up to victory. To some extent it’s true. Slap-dashing together a deck from whichever card catches your eye will see you fare badly against players who have taken the time to optimize their decks, but unless you’re specifically trying to lose, there’s a real possibility of a player lacking in skill beating one who’s mastered every strategy due to how RNG impacts the game. Since your opponent’s hand is concealed, you’re only ever reacting to what’s been played, not what will be played, so you just have to play the strategies that are typically more likely to win and hope for the best. If your opponent’s deck gives them the cards that counter that strategy, you lose. Not really because of any player choice, but just because your deck and the opponent’s deck shuffled in to a particular order that—when played with the optimal strategic choices—produces a series of interactions that result in you losing.

Draw the wrong cards and you lose, regardless of how good you are at the game. Hell, draw what typically is a good hand, play it well, and lose because your opponent just happened to draw the suitable combination of cards. Add to this RNG determining what cards you get from Orbs, determining whether you get cards that synergise with your decks, and determining the outcome of random-effect cards, and it’s easy to see how the value of player choices isn’t as rich as one might think. 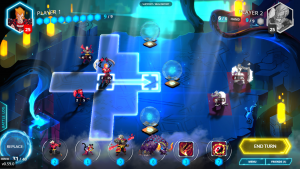 “The Grid. A Digital Frontier…”

However this RNG problem is not, interestingly, as bad as it has been in past games. All the cards you play have to be played upon a grid completely disconnected from RNG. It’s possible for the RNG to give you a good hand, but you still lose due to bad board position, and likewise it’s possible to draw a bad hand but still win because you’ve set up a good board position. Counterplay Games doesn’t do enough with their grid—highly restricted movement puts their game at a far remove from the complexities of chess, and means most matches descend to close-quarter slug-fests—but nevertheless, it is there as a filter removing some of the randomness in player victory. I’ve heard it said that in Hearthstone, a 60% win rate is good, and 70% is godly. Based on these numbers, perhaps the win rate for the top Duelyst players could reach 75-80% due to the addition of the grid and the resultant increase in the significance of player choice.

Unless you really like pixel art, it is off the back of this grid system that Duelyst is recommended, not because it’s good, but because it’s progressive. It begs the question of how the RNG problems of CCGs can be mitigated further to make them more responsive to a player’s skill. CCGs might be enjoyable, but as games of skill the popular ones are hot garbage. Duelyst, has stepped on to the threshold of something new, even if it is for the most black-hearted, miserly purpose, and it costs you nothing to give it a look.