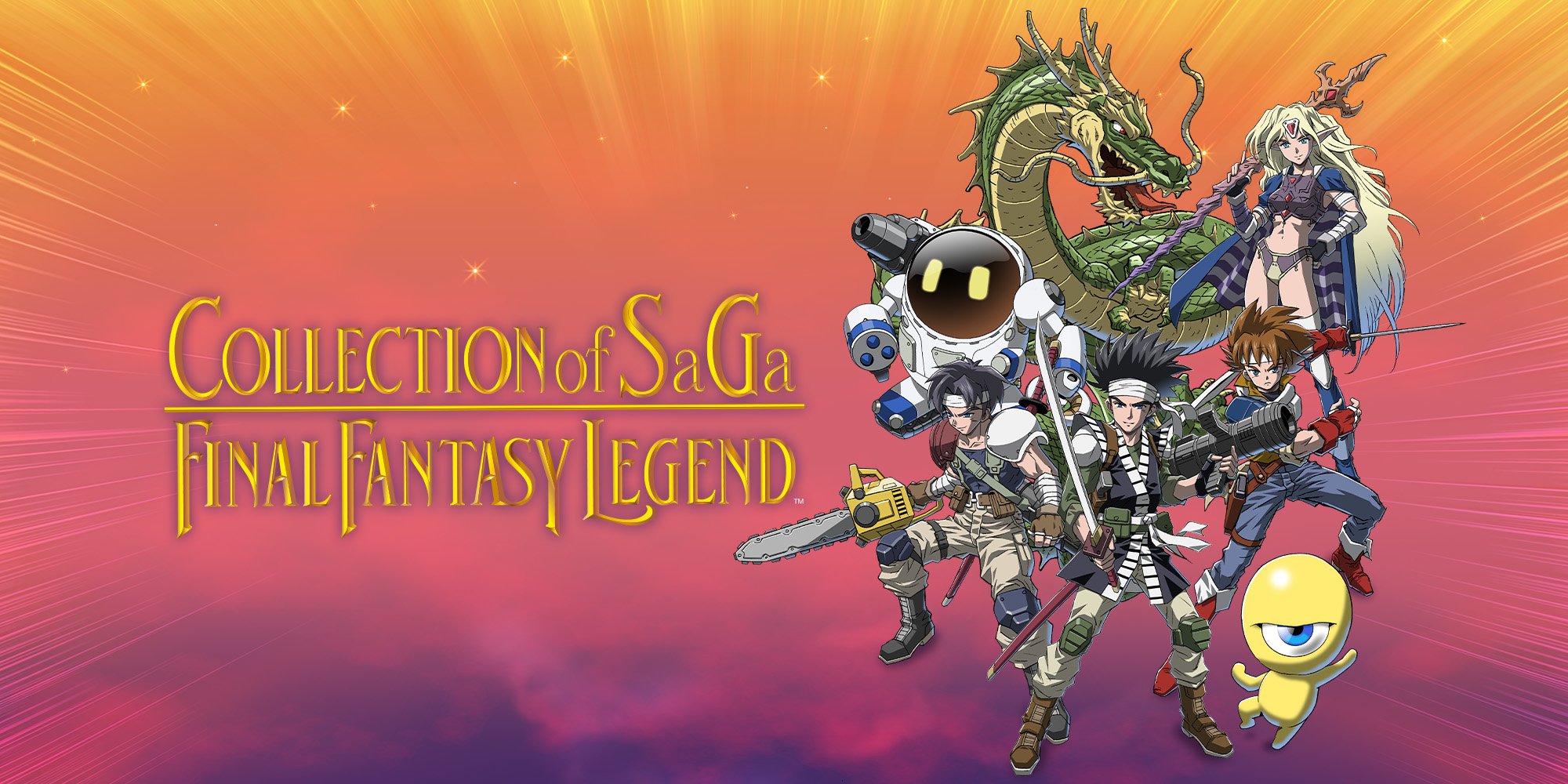 Any fan of Japanese role-playing games has a favorite Final Fantasy. From the controversial combat system of Final Fantasy XII to the expectation-defying Final Fantasy VII Remake, the series has had its share of highs and lows. But there are some Final Fantasy games that have faded into obscurity, perhaps because they never started as Final Fantasy games in the first place. The recent Collection of SaGa: Final Fantasy Legend bundle released on Nintendo Switch marks an important chapter in RPG history. These three classic handheld games are among the first RPGs ever released on the Game Boy, and though they might appear rough around the edges, they more than earn their place in the JRPG pantheon.

What is The Final Fantasy Legend, anyway?

For many, this collection may be the first time they’ve ever heard the name Final Fantasy Legend, much less SaGa. While Final Fantasy is basically a household name at this point, the SaGa series (or Legend series, as it is known in the United States) is a bit of an outlier. First released in Japan on the Game Boy in 1989, the first SaGa game was released in the U.S. in 1990 as The Final Fantasy Legend. Publisher Square (long before they became the juggernaut SquareEnix) figured that the Final Fantasy brand had more name recognition. This would be the first RPG released on the Game Boy and went on to be one of the platform’s most well-loved games. Playing it on Switch is an instant nostalgia trip, even for those who never played this game or its sequels at the time of release in the early nineties.

Much like other legacy collections on Switch, like Collection of Mana or either of the Mega Man X Legacy Collections, Collection of SaGa aims to provide a pixel-perfect playable experience. Since the three games included in the collection were originally released on the Game Boy, there’s even a vertical orientation option for the screen (simply remove the Joy-Con and prop the Switch against something, or use the touch screen to control the action onscreen). Players can toggle character movement speed, too, letting them zip through the world if they’d rather not play at the original Game Boy pace. Since all three games display at their original ratios, the collection provides a few different border options as well. Most welcome is the quicksave feature. While all Final Fantasy Legend games feature innovative save systems that let players record their progress nearly anywhere at any time, the Switch lets players easily swap between titles without fear of losing progression.

Since this is a digital-only release, players hoping for any kind of game manual-related bonuses are out of luck. This feels a bit like a missed opportunity since games as old as these can occasionally feel a little crusty to dive back into. An easy-to-access menu that displayed a scan of the original manual would eliminate the need to keep a walkthrough handy just to explain basic mechanics. In this way, Collection of SaGa is very much in line with Super Mario 3D All-Stars, in terms of collections that provide exactly what they promise on the box, and not much else. Fortunately, for diehard RPG fans, what’s in the “box” is genuinely fascinating.

Any video game released thirty years ago is going to have a certain level of cruft to contend with. All three titles in Collection of SaGa contain elements that make them difficult to play, or feel unintuitive. But the existence of this collection is a valuable tool for video game preservationists. Taken as a whole, players can trace the evolution of a classic RPG series over the course of three games. Where The Final Fantasy Legend feels aggressively obtuse, Final Fantasy Legend III feels downright pleasurable, and seeing the series evolve over the course of sampling all three games is a unique experience.

Perhaps the most striking thing about Collection of SaGa is how starkly different all three titles feel from other Final Fantasy epics. Cid is nowhere to be found, and there’s not a Chocobo in sight. Characters don’t talk about crystals and how they’re tied to the fate of the world. Players looking to connect with the origins of the Final Fantasy series may be disappointed. But embracing the goofy nature and surprising mechanical differences of the SaGa series is a journey of its own.

The Final Fantasy Legend, the earliest game in the collection, immediately sets itself apart from chronologically earlier RPGs released for other systems, like Dragon Quest III or Final Fantasy II. This title was designed to be played in short bursts, specifically for the Game Boy. But it isn’t easy, by any means. At first blush, The Final Fantasy Legend feels inscrutable. Players are dumped into a fantasy world full of monsters and magic with the barest explanation of what to do and where to go. One of the most important mechanics in the game, party management, is completely unexplained. In fact, players might try and explore the world after naming their party leader without realizing they can fill out said party with three more members by visiting the Guild, a staple in most towns.

But once players put themselves into the mindset of gamers from thirty years ago, where talking to every single NPC is the norm and the best way to progress is to try stuff, no matter how obtuse it might seem, they’ll find themselves engaged in a challenging yet satisfying adventure. The Final Fantasy Legend doesn’t tie progression to experience points, like previous Final Fantasy or Dragon Quest titles. Instead, every class has its own unique progression mechanic. Humans must equip different armor and weapons to improve their effectiveness, and having a monster in the party is a strong early game preference but might prove to be a limiting choice later.

Discovering the limitations of party members and classes and learning the joys and frustrations of progression is part of what makes The Final Fantasy Legend so interesting. However, the modern gamer will almost certainly feel frustrated at the lack of tutorialization. Fortunately, Final Fantasy Legend II and III solve the early-game problems encountered in The Final Fantasy Legend. Playing these titles side-by-side, it is evident which notes the designers and developers at Square decided were the biggest priorities.

Final Fantasy Legend II starts with what can only be described as a tutorial section. Rather than being dropped off in the middle of a nameless town with only the vague goal of ascending a mysterious tower as in The Final Fantasy Legend, the second game in Collection of SaGa begins with the player character’s father shaking their child awake and explaining that they’re going away for a while. Smash cut to years later, when the grown child decides that they must strike out and find their father. The player character’s monster-with-a-heart-of-gold teacher, Mr. S., encourages the player to build a party out of their classmates and journey through a dangerous cave to the next town. Mr. S. joins the player and the freshly-minted party on this first leg of the journey, providing welcome backup for the surprisingly difficult first several battles. From there, the player must journey the land to find 77 MAGI shards as well as their father. The game is immediately more engaging and intuitive than its predecessor and provides a welcome feeling of “tough-but-fair”-ness that counteracts The Final Fantasy Legend. It’s still difficult, but a much more palatable experience overall.

The collection’s third title makes the best case for the SaGa series as a whole. The game starts off with a bang, a simulated battle with named characters that stands in stark contrast to the previous games in the series. In many ways, Final Fantasy Legend III is the most player-friendly game. It eschews some of the more esoteric choices of its predecessors for what can only be described as “more intuitive game design”. Party members can level up with experience points instead of the more obtuse systems of the previous SaGa games, and there is even a rudimentary magic system that calls to mind the Materia system of Final Fantasy VII. There are boss fights and clear indications of where to go and what to do next, a far cry from The Final Fantasy Legend. It’s a legitimately great game, and an important one for anyone eager to see the development and growth of not just handheld RPGs, but role-playing games as a whole. There are even time-travel shenanigans to rival that of future RPG legend Chrono Trigger.

A Collection Worth Touring

At the end of the day, Collection of SaGa: Final Fantasy Legend is probably not for everyone. No matter their historical importance, the three games that make up this collection are undeniably old-school, with all the frustration that entails from a gameplay perspective. For a certain breed of RPG fanatic, this collection will undoubtedly be just what the doctor ordered. There are shades of greatness and indications of what makes the series so beloved throughout every game. For gamers who want a throwback experience, they could do a lot worse than Collection of SaGa: Final Fantasy Legend.