As I waited in line as one of the first people to play Super Smash Bros. Ultimate at E3 back in June, I felt a plethora of emotions wafting over me. The sights and sounds had created a warm buzz throughout my body, and I just couldn’t help but be in total awe of the larger than life screens right up above me, showing live streams of the lucky bastards who already had their hands on a Game Cube controller up at the front.

I was excited. Nervous. Determined.

But every so often I’d feel a sadness gnawing at the pit of my stomach. It would take me out of the moment, and instead, I’d be transported to earlier that day, when my boyfriend and I were watching the Nintendo Direct in yet another line at E3.

Revealed Ultimate fighters flashed on everyone’s phone screens, the epic theme music getting the long line of people hyped. And each time I unknowingly held my breath. Waiting… Hoping…

As most Smash fans know by now, almost all of the announced contenders are just returning fighters. Ultimate has basically made “Everyone is here” its unofficial tagline, and it should probably just be copyrighted by Nintendo at this point.

Most people have made Masahiro Sakurai’s giddy announcement into a heartbreaking meme depicting Waluigi being left behind by all his peers. But these heavily contrived Waluigi sad posts leave the real victim of this roster reveals in the shadows. Someone who was truly part of Mario’s world from nearly the beginning. Someone who has never been given their proper time to shine. 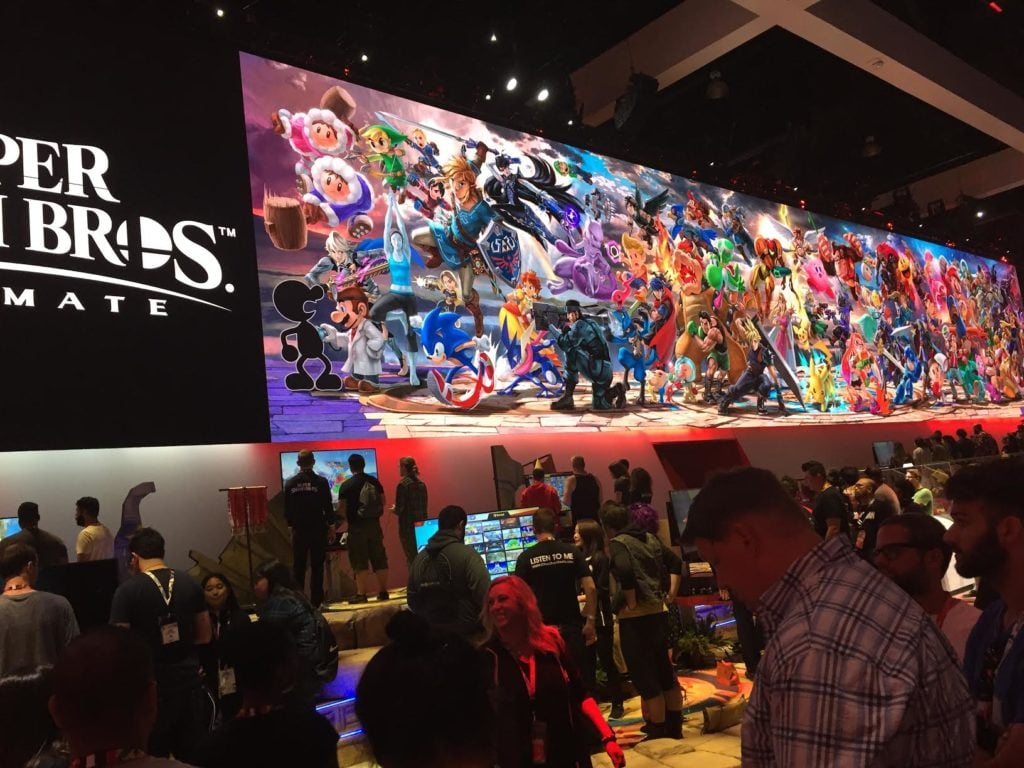 Images of Captain Toad flash in my mind as I step onto the stage, selecting Kirby as my fighter from the limited competitive roster. And while I’m fleetingly excited by the epic action underway, I can’t help but feel a sense of betrayal for seemingly accepting this new roster, playing the game as if a huge injustice had not taken place. So now I will fight for Toad. I will fight for what is right. And I will continue to fight until Captain Toad is announced as DLC for Super Smash Bro’s Ultimate.*

*To be fair I’ll play purchase the game and play it religiously each day if Captain Toad is not announced as DLC, but I will make sure to complain about it every chance I get, and I will make a custom Mii fighter that looks like Toad as a stand-in, as I did with Smash 4. Just wanted to clear that up going forward.

Despite being Peach’s loyal subject since 1985, Toad was never given the spotlight he deserves until Captain Toad came out in 2014, the first game to feature Toad as the titular character. That’s almost 30 years of being depicted in a mostly negative fashion throughout his time as a Mario sidekick, reduced to cowering in the shadows, pointing to the next castle with a shaky finger.

When I played Paper Mario: Color Splash last year I distinctly remember a Toad quivering in the shadows in one level, afraid of a shadow of Bowser. His fear had basically immobilized him, frozen from terror at what may be lurking behind the corner in the dark stage. As Mario, it was part of our mission to turn on the lights in that section of the map, shedding light on the origin of the shadow: A cardboard cutout of Bowser.

Of course, Color Splash was, at its core, a light-hearted and hilarious tale, with a seemingly endless supply of Toad scenes that had me laughing out loud. The Toad crew were voraciously sarcastic, with a hunger for one-liners, and a sense of determination that – while depicted as mostly clueless – was quite inspiring. Alas, the Toads, despite their appetite for outlandish accomplishments, were not only halted by their loopiness, but how easily they were frightened. Like Peach, Toad had to often wait for Mario to rescue him, often paralyzed by fear.

Being scared is a common theme for Toad. Despite being the leader of the Toad Brigade back in a previous title, Super Mario Galaxy, Captain Toad is always chickening out of missions at the first sight of trouble. While his excuses are comical, it’s clear that this is going to be an ongoing theme for him. 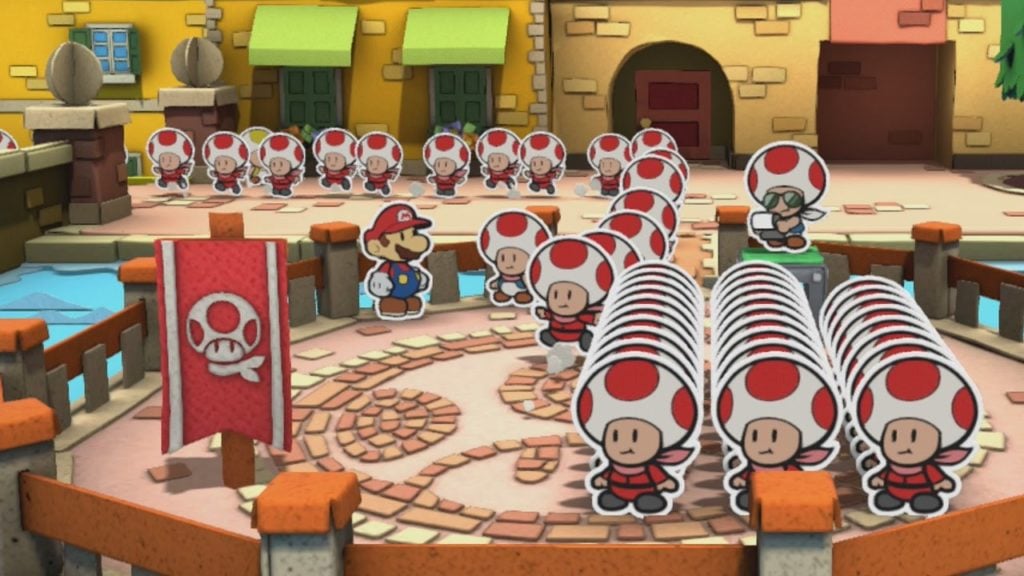 I don’t think Toad deserves to always be the butt of the joke, a whimpering simpleton who needs constant rescuing. He’s a faithful companion who is always there for Mario’s white knight adventures, acting as a guide, a hint-filled local, or even a star gatherer. He is even Peach’s punching bag in the Smash Bros series, taking the hit for her as her counterattack. The extent of his Smash Bros appearances.

To me, this is not only an injustice to Toad because of his unwavering loyalty to the Mushroom Kingdom and Mario, but because someone with Toad’s abilities and strength would never fear Bowser’s mindless minions.

Toad’s a likeable guy. But that would never be reason enough to include him in Smash, and I understand that. I’m not here to argue that Toad deserves a coveted spot in Smash because he is nice. The real argument here is that Toad is actually a very capable fighter with a lot of abilities that are often overlooked for the sake of comedy. Or to make Mario look good.

And more importantly, it showcases a variety of abilities that Toad could bring to Ultimate.

People’s main counter-argument to Captain Toad joining Smash (yes, there are sickos who want to shun Toad from the game) is that Captain Toad is not a viable character because he can’t jump. While a less cultured person could argue that Captain Toad could just be a heavy fighter (a valid statement on its own), me, a cultured Toad fan, might argue that you don’t even know the first thing about Toad. Because he is simply a god. And jumping is below him.

Did you know that in Wario’s Woods Toad can RUN UP WALLS? So Toad can stick to walls like Greninja, but he can take it a step further and climb up them. Let’s just have him tie a rope to his pick-axe, throw it at a wall, and then have him climb up from wherever it sinks in. Is propelling himself through the air like Tarzan and then racing up the walls not enough of a counter for you yet?

Then have Toad put on a cat or helicopter suit, like he did in New Super Mario Bros. Wii. He can whip the helicopter helmet out of his backpack and instantly have as much air as Jigglypuff.

So many Captain Toad haters may also point out that Toad is weak. But all they have to do is a little bit of research and they’d find out that Toad was once described as “the strongest and fastest character” in Super Mario Bros 2. In Wario’s Woods, Toad is often depicted tossing enemies with ease. It’s strange that Toad is often seen shaking in the corner when we all know the brute strength that lies dormant within him.

And in every Super Smash Bros title, we see Peach whip out her Toad as self-defense. And he counters attacks by emitting toxic gas. So if Smash is canon, which it most definitely is in an argument for Ultimate DLC, Toad can poison people, on top of climbing walls and chucking opponents.

At this point, you may be thinking, “Jesus Christ, is there anything Toad can’t do? My God.”

Because Toad is also incredibly fast. We’re talking Sonic level fast. Bayo fast. Even Fox-level shit here. Top tier fighters in Smash are usually the quickest characters with the fastest recovery times, and Toad would be no exception.

In the Mario Kart series, Toad is described as a “speed demon.” In Mario Party 7, Toad’s special item is a golden mushroom that lets him move more spaces than everyone else. Then there’s Mario 3D World, where Toad’s advantage is how fast he can run. To put it simply, Toad. Is. Fast. It’s what he’s most known for in every Mario party game.

Just do it already

It’s almost common sense at this point to have Captain Toad confirmed as DLC in Ultimate. There’s no reason not to include Toad in Super Smash Bros and if he’s not announced in the Nintendo Direct on August 8 the game should just be canceled.*

i love that video! there are so many possibilities! captain toad starring in his own game has also given me hope that he will finally be a fighter!

I think overall that smash lacks some potential great characters, yet there are characters that take up a char slot that might as well have been a costume.