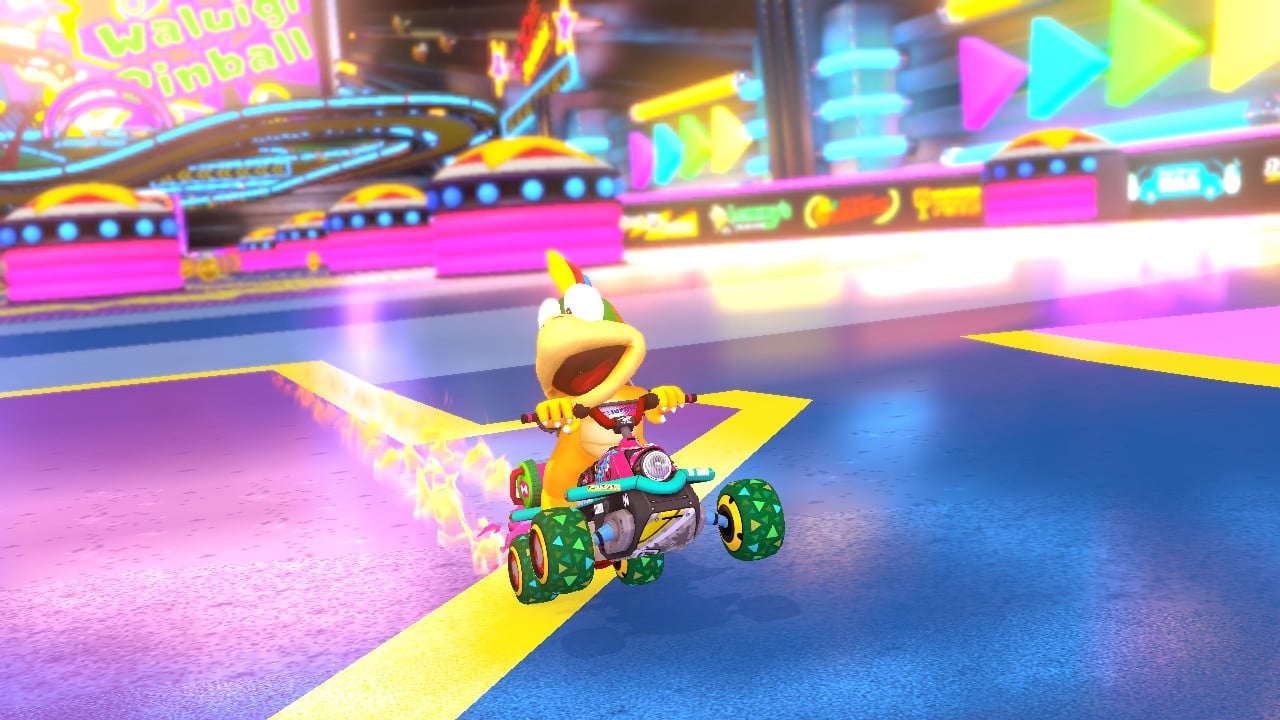 Playing Mario Kart can make you feel like a kid again. We here at Goomba Stomp have our own opinions about the latest Mario Kart 8 Deluxe – Booster Course Pass DLC tracks, but let’s be honest, what we need in this world is the fresh eyes of a 4-year-old super fan. That’s why we asked our friend Joe, a 4-year-old Mario Kart enthusiast from Massachusetts, what he thought of the new tracks from the Mario Kart 8 Deluxe – Booster Course Pass Wave 2 DLC.

Joe has been playing Mario Kart 8 Deluxe for almost a quarter of his life. He turns five in September, and he’s been hopping corners and firing off red shells like a pro ever since racing with his Uncle Chris at his fourth birthday party. He and Uncle Chris fire up FaceTime and take down two Cups at least once a week, and they eagerly anticipate the arrival of all the new tracks.

Joe likes to ride in style as the Splat Buggy set up with Leaf Wheels and a Super Glider, and while he typically mains Lemmy, he also loves suiting up his Mii-rider with a specialty Pac-Man helmet, as unlocked by the Pac-Man Amiibo his Uncle gave him. He has several favorite tracks, a standout among them Ninja Hideaway from the last batch of DLC, which he wisely notes he loves because he has, “always wanted to become a ninja.” So have we, Joe.

If Joe could have anything added to Mario Kart it would be, of course, laser shields. Take some notes, Nintendo, this kid has excellent ideas.

We thought we’d get Joe’s wise opinions on each of the new tracks for Mario Kart and give you a little perspective of our own.

The Turnip Cup begins Wave 2 of the Mario Kart 8 DLC with:

Joe’s take:
“What I like about New York Minute was that you can go really fast and the it was kind of short. And that’s it.“

Well said, Joe. New York Minute is a fun and colorful addition to the roster of Mario Kart 8 courses, most entertaining when chaining tight turns, but it shows its Mario Kart Tour roots in its brevity and simplicity. It doesn’t reach the heights of the previous DLC’s reality-based Paris, but it has a leg-up on too-short Tokyo. There’s also a shocking lack of piles of trash, rats, or dollar pizza joints in this imagined New York City, but you do get to speed through scrubbed-down facsimiles of Times Square and Central Park, where the portrayal of wandering Goombas is surprisingly accurate.

Overall, New York Minute is yet another good pull from the batch of mobile tracks. They have their own look and feel, and they don’t always soar to the heights of the main batch, but their distinctive track styles and semi-realistic setting are a welcome change for us hardened Kart enthusiasts. But who parks their cabs like that?

Joe’s take:
“What I like about Mario Circuit 3 was that it was short and that Luigi almost won the race.”

We’re all rooting for Luigi, Joe. Mario Circuit 3 lives and dies based on your nostalgia for SNES tracks, a 30-year-old memory we’re reasonably sure Joe doesn’t share. It’s simple, very flat, and relatively short, though it does feature some thrilling turns, in particular, a legendary 180° midway through.

But what really makes this one sing like Pauline in New Donk City is the unadulterated sentimentality of being transported back to 1992. The music in this track is unforgettable, and for some of us, it has been chiseled into our Mode-7 minds. It is once again wonderfully delivered in this update. Outside of that, it’s pretty by-the-numbers racing, but a welcome addition that has translated nicely and still holds up, particularly at higher speeds.

Joe’s take:
“I liked Kalimari Desert because the train was there.”

From the mouths of babes. Joe’s take articulates perfectly what makes Kalimari Desert interesting and special: there’s a train in it. It’s fun to maneuver around the train, go through the tunnel, and ride along the tracks. The course itself is otherwise an everyday ride, but it’s a welcome diversion to have in the mix.

Unlike Mario Circuit 3, the original N64 Kalimari Desert doesn’t conjure up nostalgia so much as irritation, and it’s a course that has been improved upon as it’s moved forward with the series. With the train tunnel now a mandatory excursion, it’s in its best choo-choo chasing form yet.

Joe’s take:
“I played Waluigi Pinball. I thought it was really good because there was a rainbow tunnel. And what I didn’t like about it was the part that had all the obstacles.”

Joe would go on to mention Waluigi Pinball several other times, notably when asked what his favorite courses of all time were. He ranked it alongside Ninja Hideaway, Bowser’s Castle, and Twisted Mansion (“it’s the scariest”) as one of the best.

And Joe is right. Waluigi Pinball is the knockout highlight of the new batch of DLC, astonishing most of all in that it hadn’t been included in modern Mario Kart sooner. Originally found in the legendary DS iteration of Mario Kart, Waluigi Pinball is a true classic, featuring well-defined sections that are as challenging as they are fun. Truly pulling from the feel of racing through a giant Pinball Machine as a looming Waluigi watches and a giant ball rolls, it’s a thrill from start to finish to pinball yourself through this colorful madhouse.

Motoring on over to the Propeller Cup, we find…

Joe would go on, however, to name it as his least favorite of the new batch, but perhaps this says a lot about the overall quality of this batch of tracks.

We liked Sydney Sprint a lot, too, Joe. Sydney Sprint is another interesting new course ported over from Mario Kart Tour. This real-world locale stands out particularly due to the joy of bumping on through the world-renowned Sydney Opera House. While there is a disturbing lack of kangaroos, it also features a particularly boisterous ramp section, and some absolutely blazing saxophone wailing along for the Aussie ride.

Sydney is yet another distinct realistic addition, coming closer to reaching the heights of Paris than New York. It adds a really great feel to the ever-growing assortment of races.

If Joe keeps making concise observations like this, we’ll all be out of jobs.

Joe is right, Snow Land is probably the least thrilling of this new batch. It’s largely forgettable, if lovely to look at, and most fun when there are penguins to see.

It’s by no means a total clunker, though, and thankfully doesn’t overstay its welcome. There are a few fun shortcuts, and as with many other of the simpler courses, if you ratchet the speed up to 200cc, you can make your own snowy fun.

Joe’s take:
“Mushroom Gorge is a fun race because you get to bounce on mushrooms, all different colors: red, green, blue. And also, there’s items that you can collect only if you jump up on the mushrooms high enough.”

Originally found on the Wii, Mushroom Gorge has been tweaked to perfection in this latest iteration of Mario Kart. If you like to bounce and trick, this is the Mario Kart course of your fungal dreams.

The standout feature of this little gem is definitely the massive patch of bounce-able mushrooms in the middle of the course, and they are indeed a total blast catch height on as you spring and sproing on through.

Joe’s take:
“It was really great cuz you could see all these ice creams. And at first you can even get a double item if you go through an ice cream. And, what I really really really liked about it…was the whole course!”

It’s safe to say that Joe liked this colorful new addition to the Mario Kart roster, and so do we.

Sky High Sundae is most notable due to its fun look. Just ask Kirby, a food world is a good time every time. The course itself is relatively straightforward in terms of twists and turns, though it does feature the first and only use of anti-gravity racing in the Booster Course Pass tracks. The anti-gravity is most welcome to use to ping pong off various food stuffs, though it feels a touch under-used, yet it’s hard not to smile as you sail through a giant ice cream cone. And most importantly of all, it features an ice cream cone helicopter, which we can only hope will inspire a whole new genre.

Sky High Sundae is also the first to launch ahead of its mobile release, effectively premiering among the Booster Course Pass DLC. It’s a real thrill to get to race on a wholly new track, and while the route itself isn’t the most inspiring, it manages to make for a very delicious and extremely entertaining ride.

Altogether, it seems like Joe was pleased with the Wave 2 batch of Mario Kart 8 Deluxe – Booster Course Pass DLC tracks, and so were we.

Overall, Wave 2 feels like a slight improvement over Wave 1. In Wave 2 the highs were not as high, but notably the lows were not as low. While there is nothing quite as groundbreaking as Ninja Hideaway or Paris, there is also nothing quite as yawn-inspiring as Toad Circuit or Sky Garden. Even the clunkers in this Wave 2 bunch are pretty fun, and that goes a long way. And in Waluigi Pinball and Sky-high Sundae, we have two new essentials in the mix, too.

Now all we need are those laser shields, and we’ll finally have Mario Kart perfection…

***
Special thanks to Joe, his Uncle Chris, and his family for being great sports in helping wrangle Joe’s opinions for this piece.